In 2000, Johann Sebastian Bach was the subject of an international celebration honoring the 250th anniversary of his death. Concerts, festivals, and an explosion of recordings commemorated this semiquincentennial, a testament to the composer’s enduring genius, popularity, and influence. 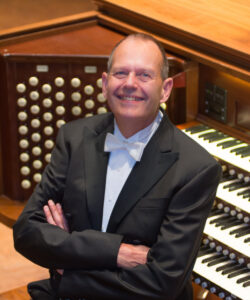 Thanks to Bach’s prodigious output of organ compositions, James Kibbie, former Department of Organ chair and university organist, made his own contribution to this global jubilee by taking on the Herculean task of performing all 266 of Bach’s extant works for organ in a series of concerts at SMTD. Ten years later, he recorded all of those works (on original baroque organs in Germany), plus another eight that had been discovered or authenticated in the intervening decade (available as free internet downloads at blockmrecords.org/bach).

Now, as he prepares to retire from SMTD this spring, Kibbie will add another seven works to that tally when he once again performs Bach’s organ canon—281 works—in a series of 18 free concerts over the course of the 2022–23 academic year, a gesture of giving back. “This series is a big ‘thank you’ to the university and community for the extraordinary opportunity of allowing me to make the organ department my life’s work these past 42 years,” he said.

In 2021, as part of the 61st Annual Organ Conference, James Kibbie presented a lecture/demonstration featuring the newly discovered and authenticated works by J.S. Bach.

The first 17 performances, which begin on September 11, will take place in Blanche Anderson Moore Hall in the Earl V. Moore Building, home of the Marilyn Mason Organ, named for the beloved former organ professor. The organ, built by renowned American organ maker C.B. Fisk, was modeled on the 18th-century German organs of Gottfried Silbermann, one of Bach’s favorite organ-builders, so it is considered similar to instruments that Bach would have played.

“After more than 300 years, it’s not always easy to know how Bach himself played, but historic instruments can tell us so much,” said Kibbie, who performed on a Silbermann organ in Rötha, Germany, for some of his Bach recordings. “It’s not just the sound, it’s the entire mechanism.”

The 18th and final concert of the series, on April 2, 2023, will take place in Hill Auditorium, where Kibbie will perform on the famous Frieze Memorial Organ. In all cases, Kibbie has endeavored to construct 18 audience-friendly programs. “Each was planned as a complete unit,” he said, “so that someone attending just one or two concerts will still experience the rich variety of Bach’s genius.”

The complete schedule of concerts will take place on Sundays at 4 p.m. and will be livestreamed. 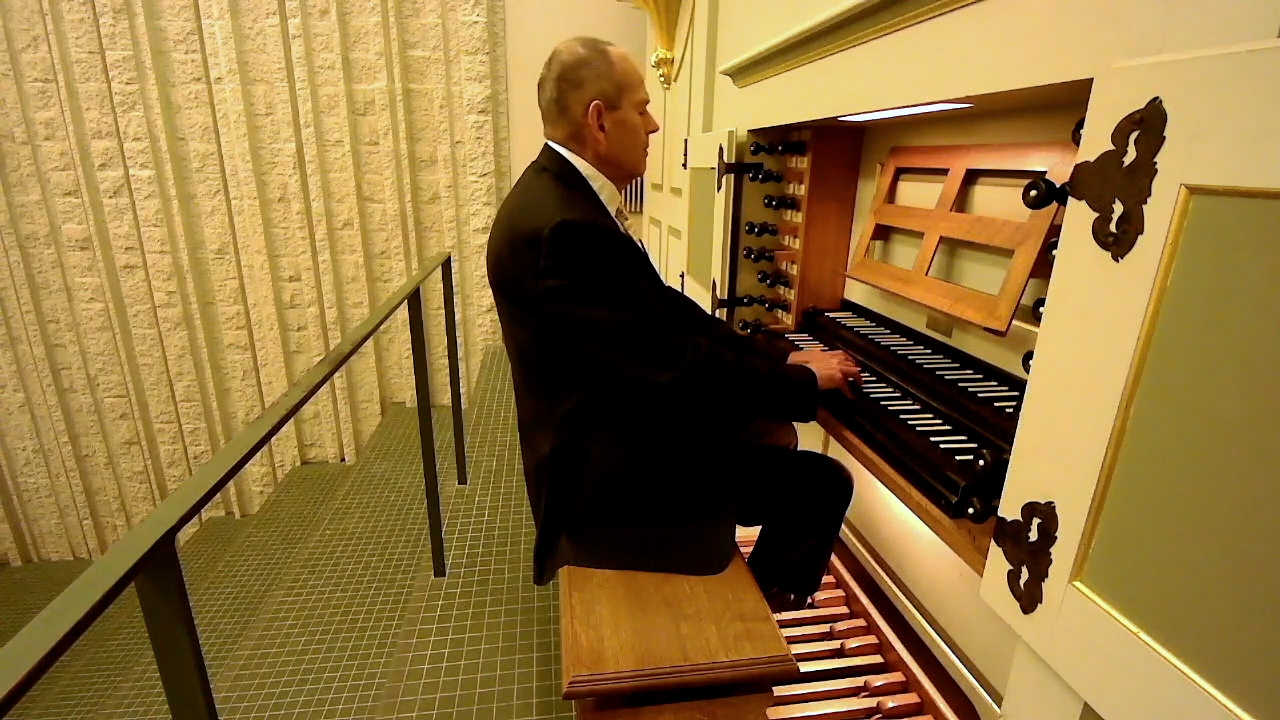 Kibbie performing on the Marilyn Mason Organ in Blanche Anderson Moore Hall in the Moore Building, where most of his Bach concerts will take place, starting on September 11, 2022.

“This concert series is something that only James can do,” said one of Kibbie’s former students, Edward Maki-Schramm (MM ’93, DMA ’99), who is now the organist/choirmaster at Christ Church Detroit and the conductor/artistic director of the Community Chorus of Detroit. “It shows us what kind of legacy he is leaving: a supreme player and interpreter of our most demanding repertoire, and a student’s best ally for mastering these works.”

Kibbie is a renowned authority on the organ music of Bach and is in constant demand as a Bach recitalist and clinician. His career as an organist has taken him around the world, including performances at the Cathedral of Notre Dame in Paris, the Royal Festival Hall in London, Dvořak Hall in Prague, and Lincoln Center in New York. He received the Grand Prix d’Interprétation at the prestigious International Organ Competition of Chartres, France, and is the only American to have won the International Organ Competition of the Prague Spring Festival in the former Czechoslovakia. He also has an extensive discography, and his performances have been broadcast on radio and television in the United States, Canada, and Europe.

But while his illustrious performance career has been and continues to be deeply fulfilling, it is matched by his work as an organ professor at SMTD. He joined the faculty in 1980 while studying for his DMA (’81), after earning his bachelor’s and master’s degrees from North Texas State University.

Kibbie came to Michigan to study with Mason (1925–2019), who taught at U-M for 67 years and developed the department into one of the top programs in the world for the study of organ, harpsichord, carillon, and sacred music. She served as chair for 50 years, with Kibbie taking over that position following her retirement in 2014, when he also assumed the role of university organist. In that role he has performed at honors convocations, university presidential inaugurations, and other high-profile events.

“U-M is one of the great places in the world for organ,” said Kibbie. “The most inspiring aspect of my career here has been working with some of the world’s finest organists. Former students are leaders in college teaching and church music nationally, and others have combined organ with other interests, such as composition or conducting, in unique, creative ways. But all our students have one thing in common – the commitment to excellence as their lifelong standard.”

“James has a unique ability as an instructor and is unwavering in his commitment to helping students navigate the murky waters of higher education,” said Maki-Schramm. “I admire him not only for his artistry, but also for his candor with colleagues and students.”

Soon after Kibbie’s first series of Bach concerts, in 2000, Maki-Schramm was inspired to create a scholarship in Kibbie’s name and led a fundraising campaign to endow it. He was already familiar with fundraising – he is now a senior major gift officer at the Detroit Institute of Arts, concurrent with his music positions – and had benefited from several scholarships while he was a student.

“It seemed only natural that there should be a scholarship named for James since he was celebrating an anniversary milestone as a professor at the time and is so beloved by his students and alumni,” said Maki-Schramm, who is hoping that the new Bach concert series will inspire alumni and concert attendees to make a donation in Kibbie’s honor.

“This is a time like never before,” he said. “Professor Kibbie’s upcoming retirement is a major hallmark in the life of the organ department, in addition to his own personal life.  A gift to the Kibbie Scholarship Fund would be a monumental honor to him. From the nationally recognized caliber of the U-M Organ Department to the friendship-forging power of the student experience, this is the moment to recognize James and make a gift.” 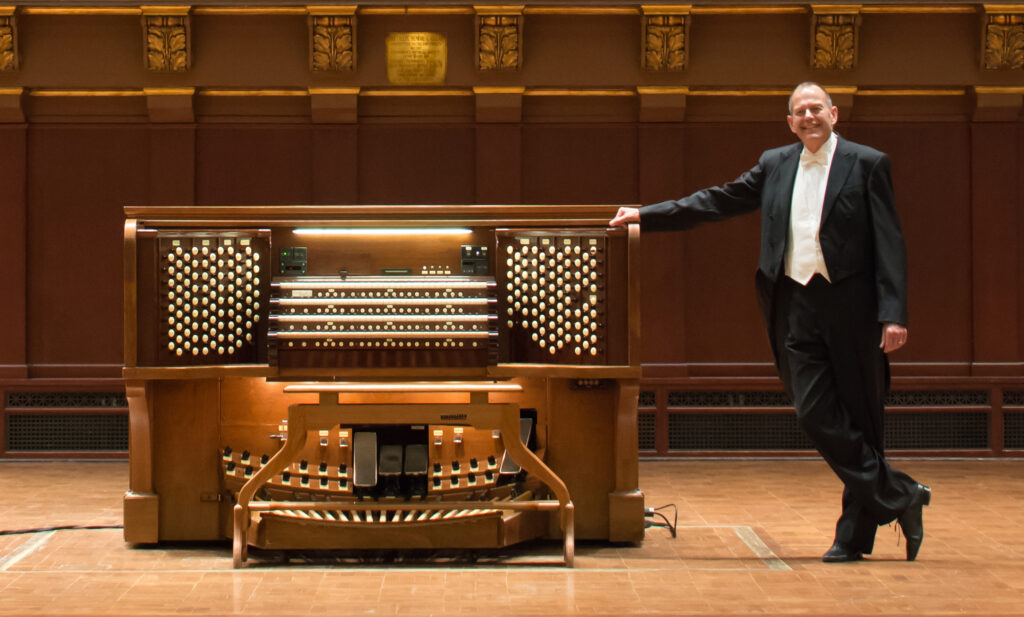 Kibbie stands beside the Frieze Memorial Organ in Hill Auditorium, where his final Bach recital will take place on April 2, 2023.

Kibbie is deeply honored to have a scholarship in his name and has witnessed the impact it has made over the last 20 years. Organ scholarships, he says, are vital to the success of the program.

“We must continue to bring the finest organists to U-M regardless of their economic resources,” said Kibbie. “While they’re here, our students need to be able to focus on their craft without worrying about financial obstacles. And after they’ve graduated, they deserve to establish their professional careers without the burden of large student-loan debt.”

“The importance of support for future organ students is at the core of what we do as musicians and human beings,” said Maki-Schramm. “What our profession will look and sound like will be determined by the coming generations. Knowing that we have done what we were able to do to support them should bring a smile to everyone’s face. When we give to an organ scholarship fund, the gift helps share our passion for music-making; it supports students on their journey to a professional career; and it honors our esteemed colleague at the same time. It’s all good!”

Clayton Farmer, a fifth-year senior who is working towards a BMA in organ performance and sacred music as well as a BS in computer science, received the Kibbie Scholarship for four years. An Ann Arbor native, Farmer says the scholarship was decisive in giving him the time he needed to figure out his career goals and to take full advantage of all that U-M has to offer academically.

“The scholarship has been crucial to my ability to pursue not only my passion for organ and sacred music, but to also explore my growing interests in other areas,” he said. “The breadth of the university’s resources is truly marvelous for someone who, like me, sometimes needs a little time to settle on their goals. I love classical music, and it has been the most constant passion throughout my life; everything else I do is meant to keep supporting that passion as long as I live.”

As he embarks on his senior year, Farmer is eagerly anticipating Kibbie’s Bach concert series. “Dr. Kibbie is one of only a handful of organists who play the entire Bach organ repertoire, so hearing them all played by one performer doesn’t happen too often,” he said. “These organ works are central to understanding the essence of Bach’s craftsmanship, and more than anything else, they collectively show his complete progression as a composer from a provincial rising star organist to a master musical artist. And Dr. Kibbie will perform a few pieces that have only been discovered recently, which means that their performance history effectively starts now. It is very exciting for us to be at the forefront of the Bach organ tradition!”

To make a donation to the James Kibbie Endowed Scholarship Fund for organ students, contact Rose Martus at (734) 647-2035 or rmartus@umich.edu.