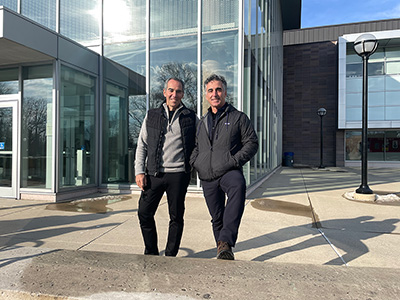 The students in the Business of Music course expect prominent guest speakers to enrich the curriculum – A&R executives, experts on copyright and intellectual property, guests from the Detroit Symphony Orchestra (DSO). The course, which is part of the School of Music, Theatre & Dance (SMTD) Performing Arts Management and Entrepreneurship minor and attracts students from SMTD and across U-M, focuses on the economics of the music industry, both commercial and cultural. The course is taught by Jonathan Kuuskoski, assistant professor of music, chair of the Department of Entrepreneurship and Leadership, and director of the EXCEL Lab, who describes it as exploring “the forces that influence the creation, production, and reception of music in our society.” 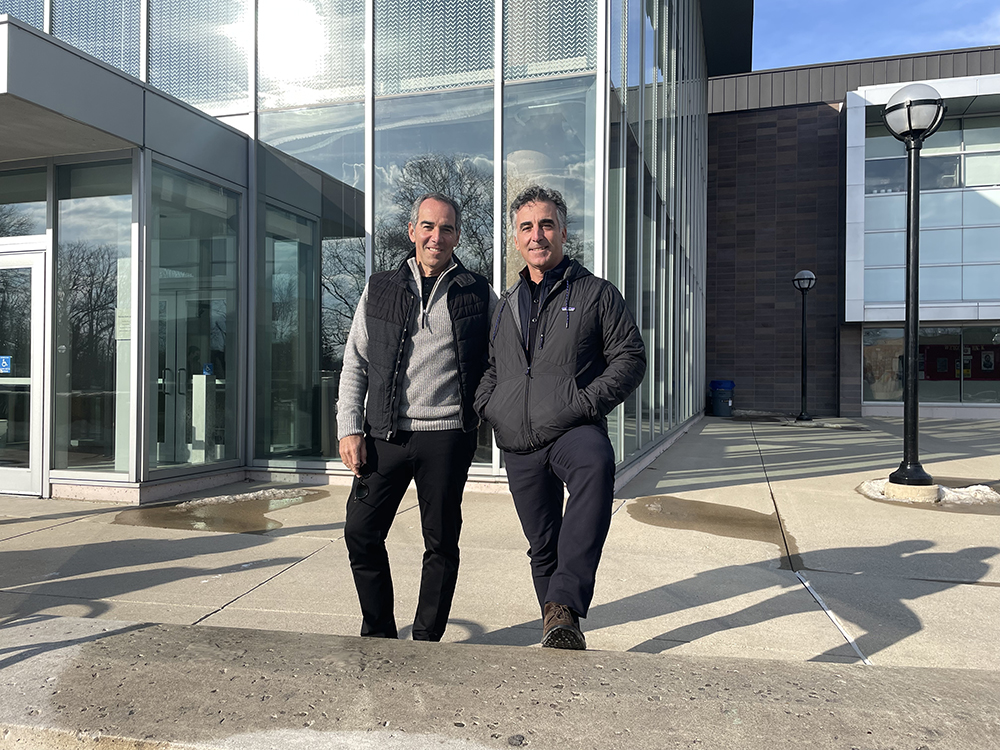 On one unseasonably warm day in February, the guests addressing the class represented one of the most potent of those forces, exceeding all expectations the students may have had. Monte and Avery Lipman, the founders of Republic Records, along with Republic’s newly appointed Chief Creative Officer Dave Rocco, came to North Campus to share their expertise, answer questions, and give an insider’s view of the recording industry. They were joined by Cameron Smoller and Sabrina Schwartzberg (a 2021 graduate of the U-M Penny Stamps School of Art & Design) of Two Bridge, a New York–based company that facilitates creative collaborations between founders and other companies or organizations.

Republic Records (a division of Universal Music Group) started more than 25 years ago at the Lipman brothers’ dining room table, in what is euphemistically described as a garden view (read: basement) apartment on New York’s Upper East Side. Powered by what Billboard magazine describes as “an insatiable drive to come out on top” and a commitment to honoring their artists’ creative vision, Republic has become a dominant force in the music industry, with a roster that includes such superstars as Drake, Ariana Grande, The Weeknd, Taylor Swift, and Post Malone, among many others. The Lipman brothers have remained at the helm of Republic Records since its inception, with Monte serving as CEO and Avery as COO. In a December cover story, Billboard named Republic the top label of 2021. 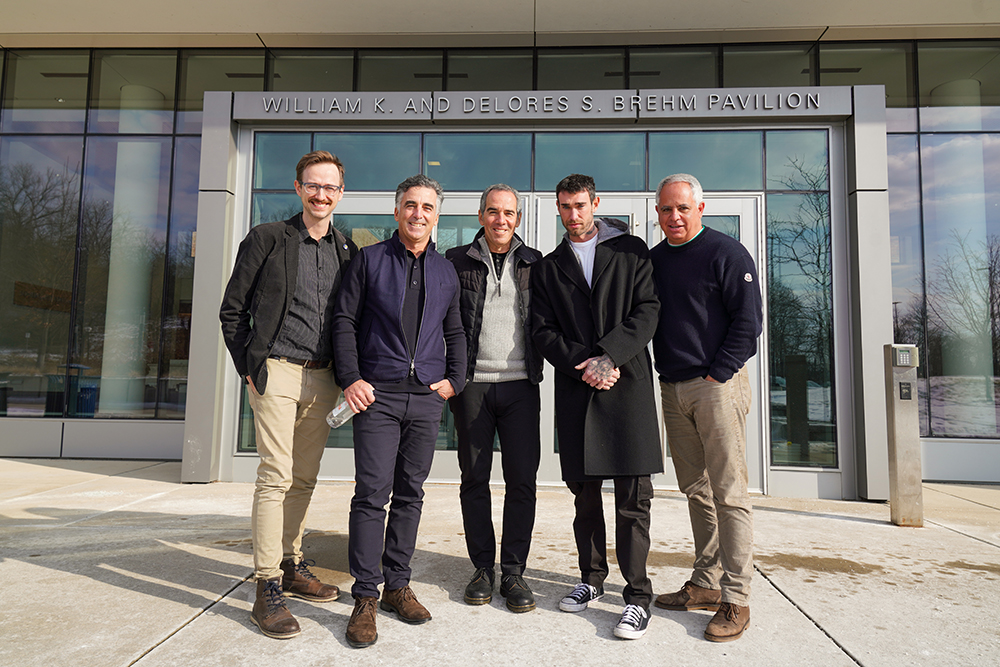 Republic Records’ visit to Ann Arbor came about thanks to Two Bridge and SMTD and U-M supporter Harris Schwartzberg. Kuuskoski recalled initial conversations in the fall of 2021 about planning an event, and he noted Schwartzberg’s motivation to connect Michigan students with professionals in the world beyond the university: “He really believes in the quality of our students,” Kuuskoski stated, “and he believes that if you can get the right people in the right room, amazing things can happen.” The right people, in this case, were Monte and Avery Lipman.

Advice for Students in the Business of Music Class

Eager to soak up as much information as they could, the students had abundant questions about what it takes to launch a record label successfully and responsibly, how the label works with artists, what the execs look for in both a new artist and a prospective employee, and what they see as the next frontier in a rapidly evolving industry. Kuuskoski had taught the students to question the stereotype of power-hungry labels mistreating business-ignorant artists, and the Republic executives emphatically underscored that point. They made it clear that the artist is the client. As Kuuskoski related, “they helped us understand more about how they view their job, which is to really support and elevate artists and to give artists a platform.” In the Billboard article, Monte Lipman recalled overhearing his seven-year-old son telling a friend, “Taylor Swift works for my daddy.” Lipman promptly stepped in to clarify, saying, “Kids, just so we’re clear: Daddy works for Taylor Swift.” 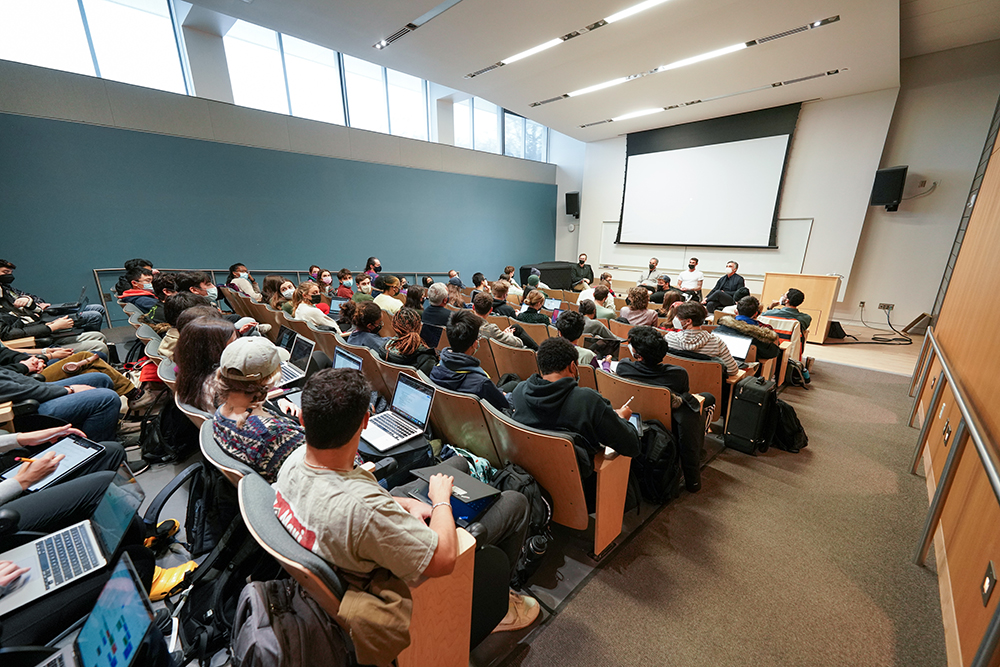 The Lipman brothers and Dave Rocco address students in the Business of Music Class.

When asked about the skills they have employed to build a successful label, the Republic executives spoke about the importance not just of discipline and drive, but also of empathy and trustworthiness. They advised the students to approach their first job in the music industry with openness and humility. Kuuskoski related a key piece of advice Rocco shared: “Don’t think about it as, you’re going to finish learning and then you’re going to start working. Think about it as, your learning is just beginning when you get the job.” That on-the-job learning is a daily reality for a former student of Kuuskoski’s; just before the visit, Kuuskoski learned that Taylor Silverstein (LSA ’21) – who majored in Film, Television & Media and took the Business of Music class as part of a minor in Performing Arts Management and Entrepreneurship – now works as Monte Lipman’s assistant.

The latter part of the Republic Records visit involved sitting in on a master class with a group of musical theatre students whose interests – whether in terms of writing or performing – extend beyond musical theatre into the pop music realm. The students performed for the guests and for Michael McElroy, chair of the Department of Musical Theatre and Arthur E. and Martha S. Hearron Endowed Professor of Musical Theatre, and Professors of Musical Theatre Vincent J. Cardinal and Cynthia Kortman Westphal. Each student performed a song once, was coached by one of the professors, and then performed again, demonstrating their ability to improve and evolve as artists.

Afterward, the students posed questions to the guests, who spoke about the perseverance and determination required to attain success in the music business. They spoke of the slow, painstaking process, and the many rejections and near-failures along the way. McElroy explained the important message implicit in such stories: “They helped our students see the significance of longevity in a world that values the immediate.” One aspect of the Lipman brothers’ success that made a distinct impression: the brothers, who are very close, have always had each other’s support. In the struggle to attain great heights in a cutthroat business, each of them knew they had someone they could trust and rely upon. With that kind of support, McElroy noted, “you can continually evolve while holding onto the core of who you are.”

Check out the Billboard article on Republic Records, as well as an accompanying video.