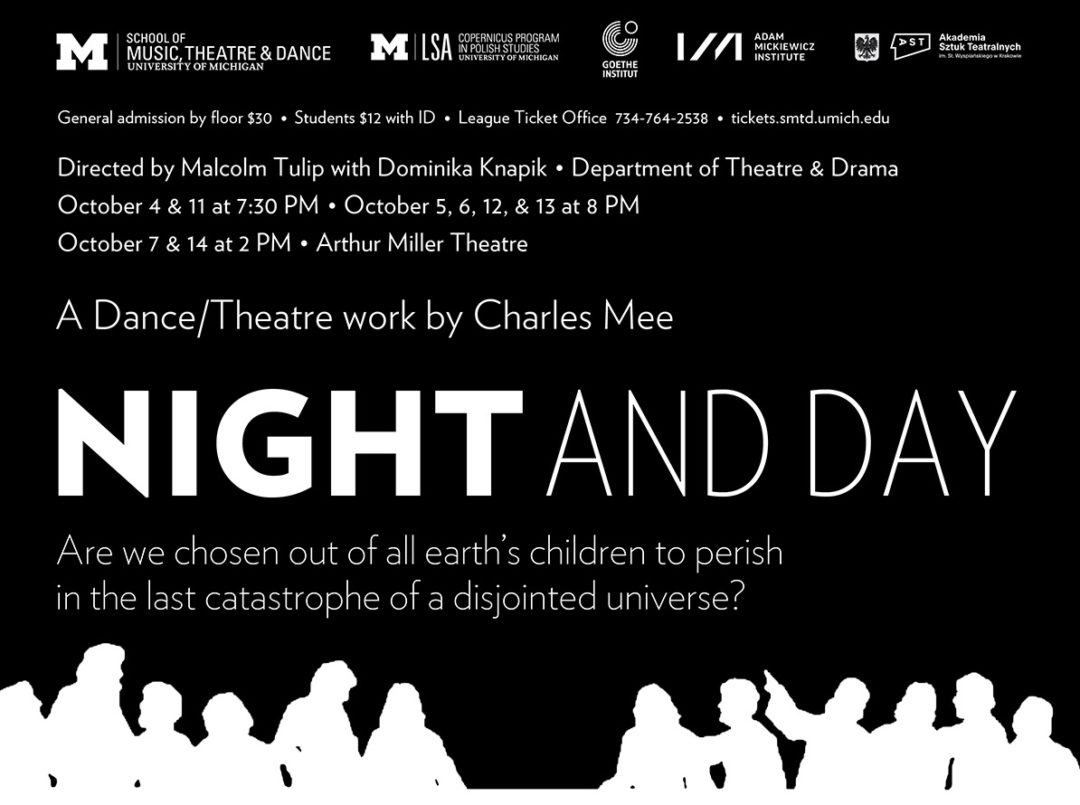 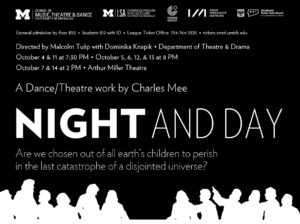 a dance/theatre work by Charles Mee

Night and Day are part of acclaimed playwright and author Charles Mee’s the (re)making project. Declaring “there is no such thing as an original play,” Mee uses past stories combined with new text in a radical reconstruction that brings together both history and current culture. His works are freely shared on the Internet for companies to use, prompting NPR to call him the “Public Domain Playwright” in 2000. Night, based on the tragedy Thyestes by Seneca, is a dark tale of twin rivalry, revenge, and darkness. In contrast, Day is a love story taken from Daphnis and Chloe by the Greek poet Longus. Classical drama and contemporary self-indulgence are side by side in these two dance theatre works that scrape away the veneer that denies our savage nature.

In partnership with the AST National Academy of the Arts in Kraków, Poland, Night and Day continue an international collaboration between Polish theatre artists and the Department of Theatre & Drama, which began in 2013. Offering a remarkable opportunity for students to learn contemporary European (particularly Polish) theatrical styles, practices, culture, and politics, Night and Day feature a cast pulled from both schools along with a mix of department and international design artists. From ancient texts to contemporary references, Night and Day reflect and comment upon what is happening during these tumultuous and unsettling times

Night and Day is sponsored in part by the Copernicus Program in Polish Studies, the Adam Mickiewicz Institute, and Goethe-Institut Chicago.

For five years, the Department of Theatre & Drama, with the support of the Adam-Mickiewicz Institute and the Copernicus Program for Polish Studies, has facilitated our exchanges with Polish artists. It hosted the Theatre of the Eighth Day, and Actor/Choreographer Dominika Knapik. Last summer it took a production of War by Lars Norén to Warsaw’s ITSelF festival. These exchanges have had a profound impact on the understanding by our students of non-US theatre practices, culture, and politics. This co-production was the logical next step. Following the lead of Charles Mee, we (re)made the plays. We are indebted to our dramaturgs Teresa Kovacs and Patrycja Kowańska for their contributions to the rewriting of scenes, the translations of texts, and the explanation of inexhaustible and continuous references. I am more than indebted to Dominika Knapik whose choreographic work is omnipresent.

The cast has been pushed very hard and their personal contributions are woven into the fabric of the production.

As with most European contemporary theatre, the text is only a starting point and the production is an opportunity for the participants to dissect and illuminate our social, political, and above all our human condition. The USA and Poland are living through tumultuous and unsettling times. But this is no polemic. The production is the needle in our cultural seismograph.

Before deciding what is wrong and what is right
first we must find out what we are
I
do not know myself
No sooner have I discovered something
than I begin to doubt it
and I have to destroy it again
What we do is just a shadow of what we want to do
and the only truths we can point to
are the ever-changing truths of our own experience
-Peter Weiss, Marat/Sade

“Are we chosen out of all earth’s children to perish in the last catastrophe of a disjointed universe?” If our civilization falls into ruins, what would be worth saving? What will outlive us? Charles Mee’s dance/theatre pieces Night and Day raise these questions without providing an answer. The pieces are not psychologically based narrative dramas. They lack any character, plot, and self-contained sphere of meaning. Instead, the fragmented single scenes open up free spaces, giving the actors and actresses the possibility to take ownership of language and discourses, while simultaneously questioning them.

Night and Day are part of Mee’s ‘(re)making project.’ Inspired by his belief that “there is no such thing as an original,” he generously leaves the creative team and the audience to find their own way through the text. The pieces archeologically excavate the interconnection of culture and violence, destruction and reconstruction by piling up discordant media: the ancient tales of Thyestes (Seneca) and Daphnis and Chloe (Longus), visual arts spanning from Matisse to current performance art, random YouTube clips, classical opera and current pop songs, German avant-garde and 20th- and 21st-century war memories. In so doing, the plays confront us with the deep historical layers that reach out into our present. Mee rejects well-made plays for their intactness, which promotes a normality that can’t be found in reality. “And so my plays are shattered and fucked up and full of wreckage and stumbling and awkwardness and making some effort not to be civilized. […] That feels like it works with me, and if I would get a lot of other people feel okay about that world too, then I’ve made the world a safe place for me to live in and I’m no longer threatened.”