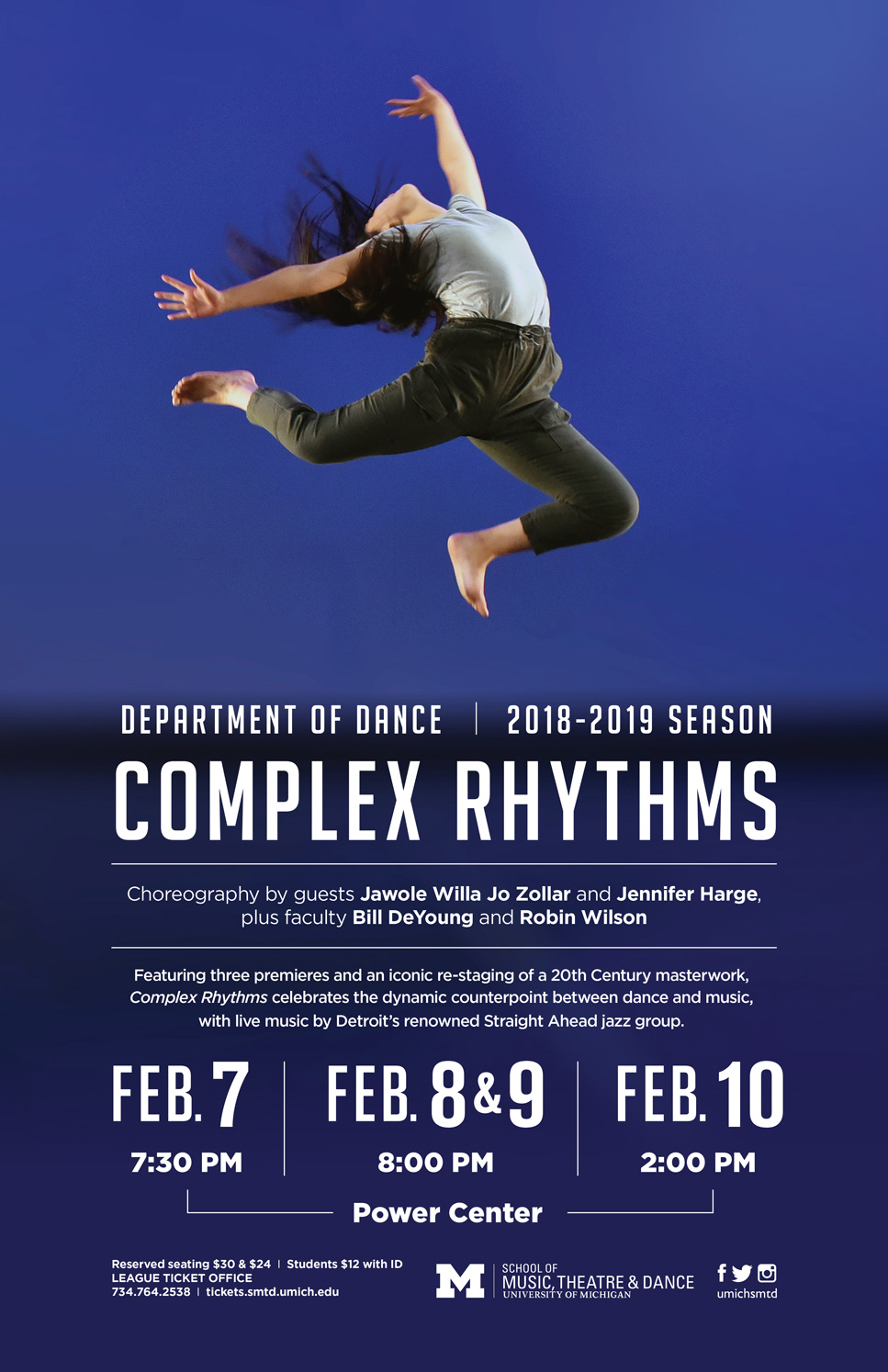 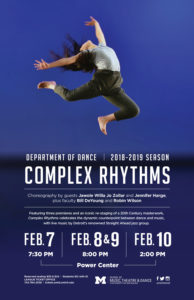 The Department of Dance presents an evening that celebrates the intricate way in which dance and music combine. Complex Rhythms features three new creations and the re-staging of a noted twentieth-century masterpiece. This dance concert explores the interaction between rhythm and bodies, as well as sound and expression.

Shelter, created in 1988 by Urban Bush Women founder Jawole Willa Jo Zollar, is an unsentimental commentary about homelessness and disenfranchisement that the New York Times says “is so filled with compassion and anger that it becomes a powerful incantation against the evils of obliviousness and neglect.” Jennifer Harge, Artistic Director of Harge Dance Studios, is an alumna, lecturer, and 2018 inaugural winner of the Eva Yaa Asantewaa Grant for Queer Women(+) Dance Artists in New York. She was also recently honored as a Visual Arts Fellow by Kresge Arts in Detroit. Harge’s work lies at the intersection of movement, performance art, African-American culture, and choreographies of protest.

Faculty choreographer Robin Wilson’s new work 7 x 12 and a Little Bit of Cha-Cha is full of color and life, inspired by Cuban rhythms. Wilson’s dance will include live music from Straight Ahead, an eclectic and innovative jazz group from Detroit.

Choreography by Robin Wilson, in collaboration with the dancers

From the Choreographer: The idea for creating 7 x 12 and a Little Bit of Cha-Cha came out of an evening at the Detroit Jazz Festival, listening to Straight Ahead perform.

I’ve always been fascinated in the dialogue between the utterance of sound and the generation of movement, and playing with the conversation between improvisation and previously-composed movement and sound.

Creating a tightly-woven relationship of dance and music scores has been central to much of my work – relying on the innovation of all of the collaborators “in the room” – the composer/musicians, the cast of dancers, and me in my role as director, choreographer, and contributor to the musical landscape.

“do you know what it’s like to live on land who loves you back?”
– Danez Smith, Don’t Call Us Dead

Studio A, will you die with me? is a fire ritual that works to disrupt the anti-black, heteronormative, and capitalist structures that live within the fabric of Western dance studios and dance curriculums. Throughout the ritual, we are working to re-fertilize the soil of any and all dance spaces that exist through the use of oppressive force(s). Our work is an offering to future generations of dance students to be able to move and create in a fully inclusive and liberated space.

To understand the physical functionalities of our ritual, please refer to the movement score that has guided our process:

From the Dramaturg: Shelter is a dance piece choreographed by Jawole Willa Jo Zollar, the Artistic Director of Urban Bush Women. Urban Bush Women is an African American women’s dance ensemble founded in 1984. The company’s mission is to give light to the voices of disenfranchised people through dance. Shelter was first staged in 1988 with the Department of Dance Chair Anita Gonzalez and Associate Professor Robin Wilson as original company members. While the intent of the first staging was to address the suffering and isolation of homelessness, the piece has been restaged multiple times. Each adaptation shifted the theme based upon the bodies and companies performing it. After Hurricane Katrina, the piece was adapted to address the lives of the people that the hurricane left homeless. This is the version of Shelter performed today.
– Efe Osagie

Welcome to Complex Rhythms, a concert of four dance works that embrace a range of rhythmic dialogues between dance and music, movement and idea. We celebrate the diversity of the dance field with our inclusion of three works by women of color.

Complicated rhythms abound in the themes of displacement, exclusion, and resilience explored in the works created by our guest artists. Images of a ceremonial fire ritual unfold in Detroit dance artist Jennifer Harge’s Studio A, Will You Die With Me?, developed collaboratively with her cast of 13 dancers. Set to music by American songwriter and rapper Frank Ocean and Harge’s grandmother, Ernestine Shockley, the work accumulates rhythms of purification, transformation, and renewal. Shelter, an eloquent work about homelessness created in 1988 by Jawole Willa Jo Zollar for her company Urban Bush Women, is as relevant now as it was at its premiere. The work features closely woven rhythms of dance, live percussion and voice, and recorded music. Our ties to this iconic work run deep. Professor Robin Wilson, the vocalist for the work, was a dancer in the original 1988 cast, as was our chair, Professor Anita Gonzalez.

These dances come to fruition not only through the dedication of our extraordinarily talented dancers, choreographers, re-stagers, and rehearsal directors, but also in collaboration with our superb team of lighting, costume, and set designers, and our larger production team. We are thrilled to share these powerful works with you and hope you enjoy the performance.

← Dances for Petersburg The Exonerated →