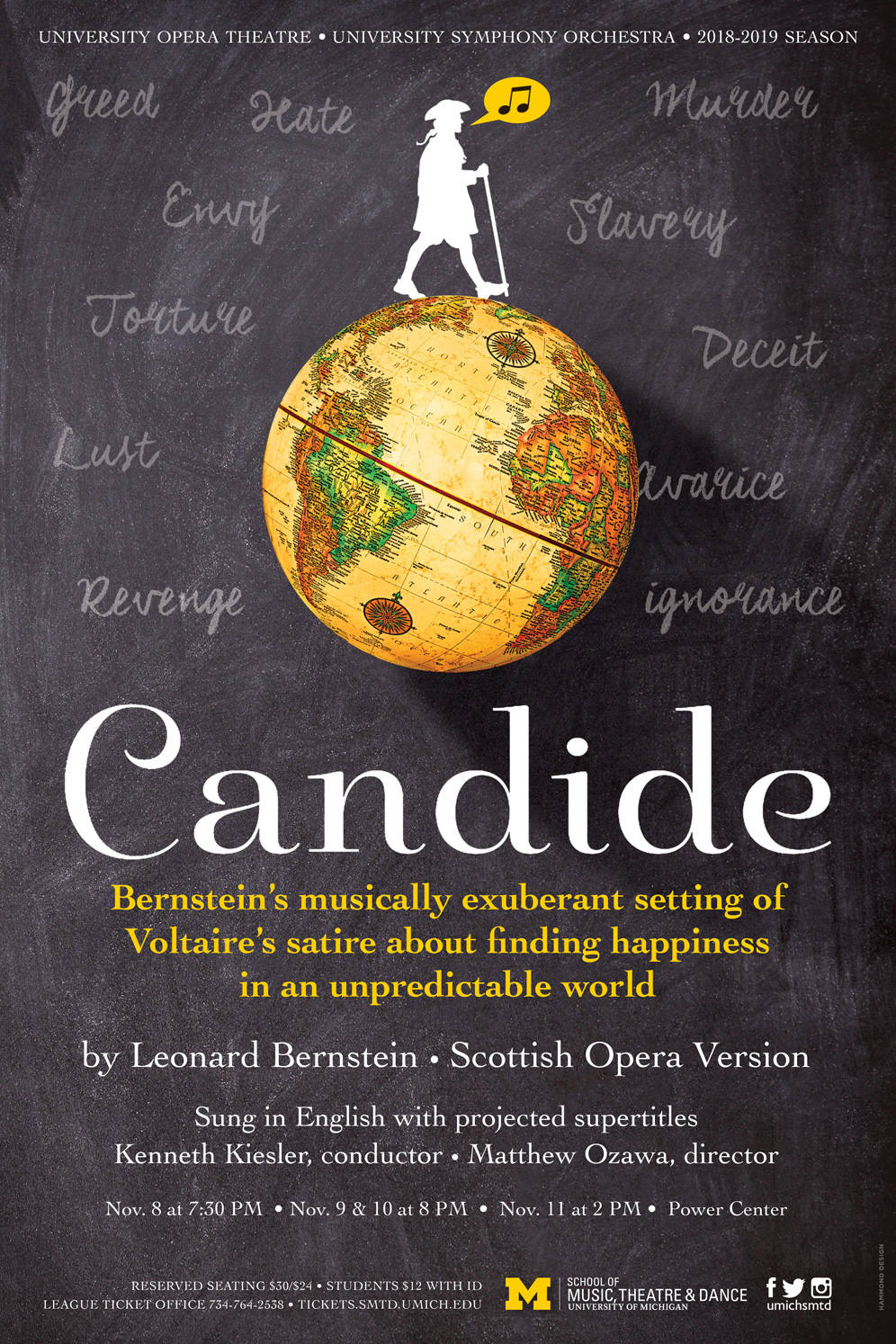 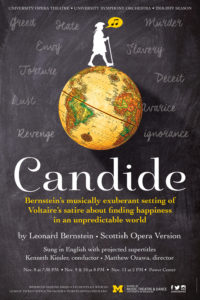 Adapted from the 1759 novella by Voltaire, the opera follows good-natured, naïve, young Candide on his adventures across the globe. Through war, earthquakes, and other sorts of calamities, the ever-optimistic Candide and his companions cling to the philosophy that they live in “the best of all possible worlds,” even when reality intrudes. Candide takes us on a buoyant journey, searching for what we perhaps may find “in our very own garden.”

Our production celebrates the 100th birthday of composer Leonard Bernstein, whose American music crosses over traditional music disciplines. His musical compositions are renowned for brilliantly uniting diverse musical styles. Candide, first conceived in 1953 by playwright Lillian Hellman, has been performed by opera and musical-theatre companies alike. The show has undergone numerous revisions and incantations including the 1988 Scottish Opera Version, being performed by U-M. Featuring Bernstein’s most inventive and melodic score, which includes such favorites as “Glitter and Be Gay” and “Make Our Garden Grow,” Candide is story filled with lively entertainment and exceptional emotional power.

Learn more and listen to excerpts from Candide at: leonardbernstein.com

Adapted from the 1759 novella by Voltaire, Candide is a satirical and comic operetta that takes us on a buoyant global adventure as Candide and Cunegonde, forced to leave the nest, must grapple with unpredictable experiences and difficult life decisions.

Making my UM directorial debut with Bernstein’s wildly exuberant operetta has been a treat, and collaborating with the students and Departments of Voice, Musical Theatre, Theatre & Drama, and Dance has been an unbelievably rewarding venture. What better way to bring our communities together than on a show that celebrates diversity, humanity, and our ability to cultivate a collective “garden.”

Our students have grown immensely from working across disciplines and with a diverse array of musical styles. We are immensely proud to celebrate Bernstein’s centennial with this show, and we hope you enjoy both the raucous entertainment and poignant emotional power found in Candide.

Voltaire’s satire begins in the country of Westphalia, an idyllic home where the scholar Pangloss tutors his four students in Optimism, where “all is for the best in this best of all possible worlds.” Maximilian and Cunegonde are the prissy children of the Baron, Paquette a servant girl, and Candide a bastard cousin. Candide and Cunegonde reveal their affection for each other and decide to marry. However, after their love affair is discovered, Candide is exiled from Westphalia and is tricked into joining the Bulgarian army. Westphalia is ravaged in the war but Candide survives to find an apparently dead Cunegonde. Despite losing his love, Candide carries on to Holland maintaining that it must be for the best. It is in Holland that Candide comes upon his old tutor Pangloss, who tells him about his affair with Paquette, from whom he contracted syphilis. Together they board a ship to Portugal where they are seized by the Spanish Inquisition, whipped, and Pangloss hanged.

Meanwhile in Paris, Cunegonde has come under the care of the Old Lady who prostitutes her out to the highest religious officials in Paris. Soon, Candide finds her and they are reunited, though changed. In the heat of the moment, Candide kills two of Cunegonde’s suitors so they must flee with the Old Lady to Spain. There the Old Lady recounts the horrors of her life, revealing herself as a resilient woman who has had to constantly adapt to her surroundings. In Cadiz, they learn that they are being chased by police, so the tour-guide Cacambo helps them begin their journey to The New World.

Voltaire continues his story in Buenos Aires, where Maximilian and Paquette find each other at a slave auction, but are quickly separated. It happens in that moment that Candide, Cunegonde, the Old Lady, and Cacambo arrive in Buenos Aires and are greeted by the Governor. He quickly falls in love with Cunegonde and takes her as a bride, with the Old Lady in tow. Candide and Cacambo must flee to Surinam, but on their way, they find themselves in the mystical, golden city of El Dorado. There they are gifted golden sheep and they continue on their way. Once in Surinam, Candide and Cacambo split up – Cacambo returns to Buenos Aires to ransom Cunegonde and bring her to Venice, while Candide goes straight to Venice.

Candide’s journey is thrown off by a shipwreck, but he is rescued by a slave ship with Pangloss aboard. Together, they make their way to Venice where they find Maxamilian, Paquette, and Cacambo, who leads them to the casino where Cunegonde is working as a prostitute. At the casino, Cunegonde and the Old Lady try to scam Candide of his fortunes, but they later recognize each other. Hurt by Cunegonde’s betrayal, Candide becomes disillusioned with the Panglossian ideal of optimism, but remains committed to Cunegonde. Despite all the terrible things that have happened, Candide and Cunegonde decide to cultivate their lives together.

[/accordion][accordion title=”The Many Versions of Candide“]

In 1953, the renowned playwright Lillian Hellman proposed to Leonard Bernstein that they adapt Voltaire’s Candide for the musical theater. Voltaire’s 1758 novella satirized the fashionable philosophies of his day and, especially, the Catholic Church whose Inquisition routinely tortured and killed “heretics” in a ghastly event known as an “Auto da Fé” (“act of faith”). Hellman observed a sinister parallel between the Inquisition’s church-sponsored purges and the “Washington Witch Trials,” fueled by anti-Communist hysteria and waged by the House Un-American Activities Committee. Charged with rage and indignation, she began her adaptation of Voltaire’s with lyricist John LaTouche and Bernstein, who wrote numerous musical sketches. Before long, LaTouche was replaced by poet Richard Wilbur. By October 1956, Candide was ready for performances in Boston, where Dorothy Parker contributed lyrics to “The Venice Gavotte” while Bernstein and Hellman had also added lyrics of their own to other numbers.

The original Broadway production opened at the Martin Beck Theater in New York on December 1, 1956 to mixed reviews and closed on February 2, 1957. Fortunately, the original cast album was recorded by Columbia Records, so the music thrived. The recording sold well, and Bernstein’s score gained a sort of cult status.

In 1958, a full-scale production in London, England, was prepared, with a revised book credited to Lillian Hellman assisted by Michael Stewart. Candide opened on the West End at the Saville Theater on April 30, 1959. In the United States, there was no major production until 1966, when Gordon Davidson directed Candide for the Center Theatre Group at the University of California at Los Angeles.

In 1971, the Los Angeles Civic Light Opera Association mounted a production in
which Sheldon Patinkin attempted a complete revision of Hellman’s book with a substantial shuffling of musical numbers. This version was performed in San Francisco, Los Angeles, and later at the Kennedy Center in Washington, D.C. Though this production was not successful, it seems to have stirred up interest in Candide. In 1973, Harold Prince and Hugh Wheeler devised a new small-scale version which drew the ire of Lillian Hellman, who at this time withdrew her original adaptation of Voltaire. Thus, the 1956 version of Candide is no longer available for performance.

This new version opened at the Brooklyn Academy of Music’s Chelsea Theater in December, 1973. Harold Prince directed a free-wheeling single-act production, which included some new lyrics by Stephen Sondheim, and a thirteen-instrument orchestration by Hershy Kay. The young and lively cast, and spirited musical direction by John Mauceri, helped make this production Candide‘s first critical and popular success. Known as the “Chelsea” version, this is the earliest version of Candide available for performance.

In October 1982, New York City Opera presented Candide in its first version for an opera house. As a full length two-act production, a great deal of music that had been cut in 1973 was reinstated, under Mr. Bernstein’s supervision, by John Mauceri. New scenes were adapted from Voltaire by Hugh Wheeler, and once again Harold Prince directed. As music director of the Scottish Opera in Glasgow, John Mauceri took the opportunity to examine Candide one more time in 1988, with a production that included even more music, including a new “Entr’acte” and a recurring chorale, “Universal Good,” created by Mr. Bernstein from a long-discarded aria. Jonathan Miller and John Wells directed and further adapted Hugh Wheeler’s script. After Mr. Bernstein had attended the final rehearsals and the opening in Glasgow, as well as a production later in the season devised by Jonathan Miller for the Old Vic in London, he decided the time had come for the composer himself to re-examine Candide.

This revised and renewed version of Candide was presented by the London Symphony Orchestra in concert at the Barbican Centre, London, England, in December, 1989, and was recorded by Deutsche Grammophon and taped by Video Music Productions. Leonard Bernstein and John Wells created a narration, performed at the time by Adolph Green, that moved the action swiftly from one musical number to the next.

In 1994, the engraving of the Scottish Opera version became available from Boosey & Hawkes, in a piano/vocal as well as in a full score (with engraved orchestral parts). While this publication encompasses the complete score, it by no means reflects a final, frozen show. Like its hero, Candide is perhaps destined never to find its perfect form and function; in the final analysis, however, that may prove philosophically appropriate. 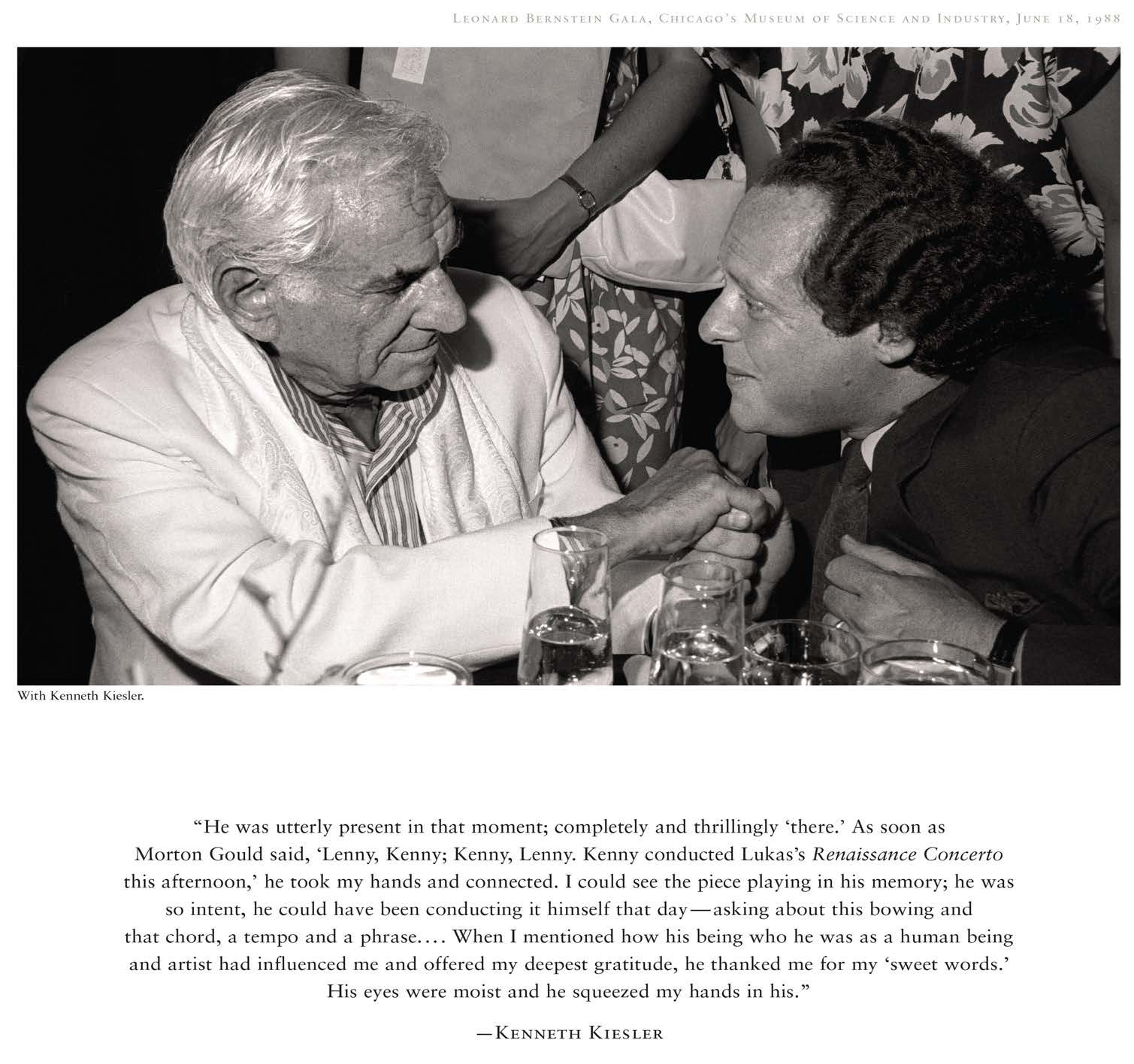