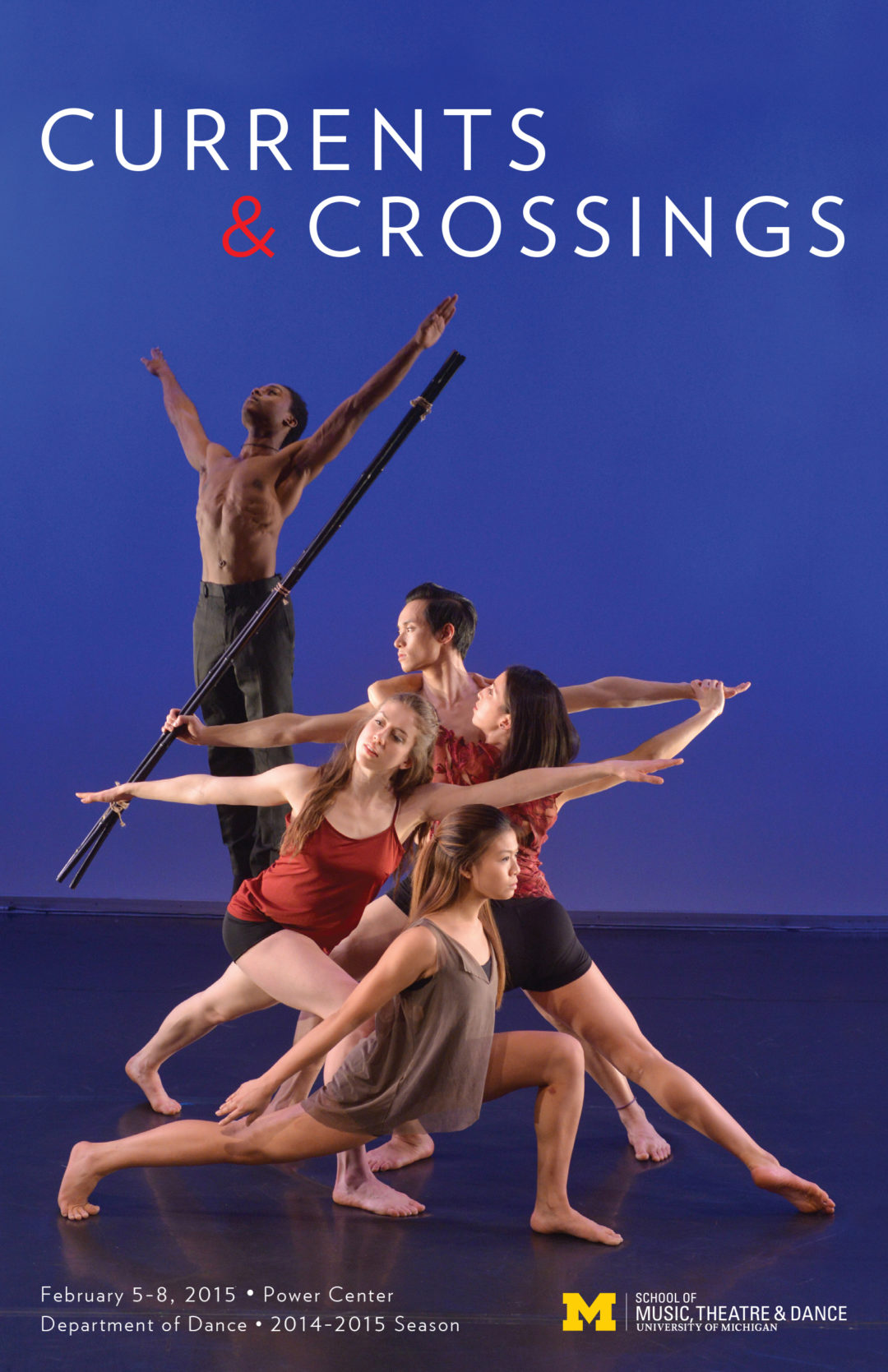 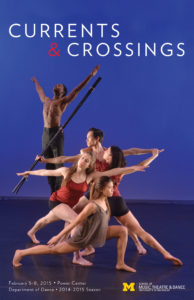 Highlighting Currents and Crossings, a concert of modern dance, is Brisk Singing (1997) by British choreographer Richard Alston, CBE. Brisk Singing is a lyrical and energetic dance set to excerpts of the opera Les Boréades by Jean-Philippe Rameau. Alston is internationally renowned for his instinctive musicality and pure dance aesthetic. The New York Times declared “…Alston’s style – the way he responds to sound, rhythm and phrasing; the way he sculptures a dancer’s body in space; the tripping intricacy of the footwork he gives is performers — is compellingly unusual. There are few choreographers who give you this density of movement and this sophistication of musical response.” Jessica Fogel creates a dance based upon the elemental force of wind —its mystery and invisibility, its congruence with our inner breath and spirit, its potential as a powerful energy source, and its ability to shape and transform. Intrigued by the African tradition of bottle trees, Robin Wilson explores the stories and spirits released from the bottles as they are shattered in the wind through dance and the spoken word. A work by Sandra Torijano rounds out the program.

Choreographer’s Note:
Adapted for the Power Center, Into the Wind premiered in Muskegon, MI in August 2014 near the grounds of the Michigan Alternative and Renewable Energy Center (MAREC), a prominent site for offshore wind energy research in the Great Lakes. Poised between a soon-to-be-closed coal factory and a renewable energy center, with an industrial past still lingering in its soil, the lakeside site captured my imagination as a place in transition, inviting new winds. One section of the dance speaks to the site’s legacy as the former location of the Continental Motors factory, which made engines for cars and airplanes from 1906-1993 and was the manufacturing heart of Muskegon. After the factory was razed, the site was designated a SmartZone by the state of Michigan with an emphasis on developing renewable energy technology. Envisaged as a green living and working community, the site has been slow to develop, thwarted by the recession. Muskegon’s story has resonance for communities across the country, working to rebuild their economies and move toward cleaner energy sources.

Interviews with former Continental Motors workers form part of the musical score. Another part of the score is based upon wind data gathered by a buoy launched by MAREC to study the potential for offshore wind development in Lake Michigan; Robert Alexander transformed this data into sound. Collaborator Keith Taylor’s poem Circle in the Wind comprises the epilogue.

Hughie Lee-Smith’s painting Après-Midi, owned by the Muskegon Museum of Art,
struck me as being remarkably similar to the Muskegon site and became a springboard for the dance. Aquatic ecologist and artist Sara Adlerstein, whose painting Schwush inspires some of the visual design, has been interested in the question of what influences our perceptions of beauty in a landscape, and it was her question that initially led me into the wind. Wind is one of the oldest sources of energy used by humans, and today there are rapidly evolving technologies for harnessing its power. The installations of wind farms in communities have been fraught with divisive arguments for and against these developments, with many protesting the visual aesthetic of the turbines. The choices are ours to make. Which way is the wind blowing?

Choreographer’s Note:
Uruguayan writer Mario Benedetti asks: “Where is my country?” (from a poem
with the same title). He wanders in his imagination… with many questions about what constitutes his place of being and where his country or home might be. He speaks of exile and hope for finding that place of unity and wholeness: “Is it below the cloud? “Over the gods?” “From this side of the wind?” My choreography Travesía del Papalote (Kite’s Crossing) explores these ideas.

The “kite,” in flight yearns for freedom and gives us hope to rise above… the kite that unifies our human condition, the dreams and the solidarity as an act of faith. The ideas sail, cross, suspend, land, their sorrows purified. The kite fills the soul with liberty and its sensitive gestures as it waves to us below, nurtures our aspirations, and gives peace with an Elegy as a lament for a special friend. In remembrance of William.

Choreographer’s Note:
Throughout the Carolinas and the Deep South, one can still find “bottle trees” in
the yards of African-American families. Often cobalt blue, the bottles dangle from tree branches – to confuse and capture “lost” spirits or “haints,” who might otherwise enter the homes of the living. Some people can sense their presence, as these disembodied spirits roam about, watching and waiting, inhabiting dreams or whispering and prodding us to go this way or that. Others feel almost nothing, save the occasional inkling as these lost souls reach out, cajole, and even encourage. The spirits captured by the bottle tree all have stories to tell. These are but a few.

First performed by the Richard Alston Dance Company at the The Gardner Arts Centre, Brighton, England, on Oct. 22, 1997

Choreographer’s Note:
Brisk Singing is first and foremost a joyful response to the brilliance of Jean-Philippe Rameau. Known in his own time as ‘le dieu de la dance’, Rameau’s flow of lyricism, made edgy with wonderfully odd phrasing and urgent rhythm, speaks to dancers in a similar way to Stravinsky in our own century; both composers seemed able to breathe movement into all their music. Les Boréades is a long opera about a rather obscure mythical subject. Suffice it to say that Les Boréades were the Hyperboreams, inhabitants of an imaginary kingdom at the back of the North Wind. Their lifetime spanned a thousand years which were entirely devoted to song, dancing and pleasure. From this opera I have purposely chosen not just the music written for set dances (of which there is plenty) but also choruses, recitatives and arias, all coursing with dance rhythm. There is darker music too – brooding choruses, stately entr’actes – but Brisk Singing centers around a lyrical duet to the entrée from Act IV, described by John Eliot Gardiner as “perhaps the most melting and gravely sensual writing for orchestra to emerge from the entire baroque era.”

Funding for the August 2014 premier of Into the Wind generously provided in part by the U-M Third Century Initiative, U-M Office of Research, Arn Boezaart and Grand Valley State University’s Office of the President, the Michigan Alternative and Renewable Energy Center, Muskegon Museum of Art, and West Michigan Jobs Group.

Brisk Singing is funded in part by an Internationalizing the Curriculum grant from the Center for Research on Learning and Teaching. 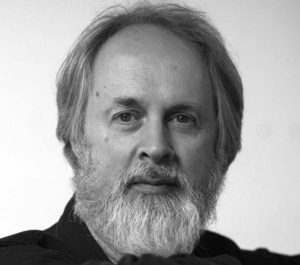 Welcome to Currents & Crossings. Tonight’s program introduces the work of London-based choreographer, Richard Alston, to the University of Michigan and to Ann Arbor. Developing transatlantic connections has been one of my curricular goals since joining the Department of Dance in 2007 and this has been supported by a $10,000 Center for Research on Learning and Teaching grant. The grant has enabled us to host several master classes and seminars through the 2014 Fall term and to expose our students to a wide range of British dance experiences. During a two-week residency in November, Alston’s 1997 work, Brisk Singing, was restaged by two former Richard Alston Dance Company members and, this past week, Richard has been working with both casts in the Dance building and here on the Power Center stage.

The restaging is both timely and poignant for me personally since this is my final year as Chair of Dance. Brisk Singing reconnects me with a favorite choreographer and with my former home city and dance scene. Most importantly, the restaging has reinforced to our students how an understanding of historical and cultural contexts – the interplay of currents and crossings – is critical to their embodiment of choreographic style. It’s been an incredible journey of discovery and transformation as they have embraced the rigor, clarity and musicality of Alston’s style and it’s been a joy to work with everyone involved in the restaging. 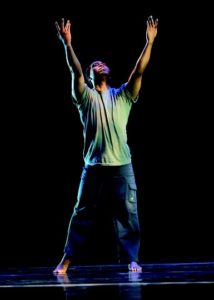 This year’s concert is dedicated to a former MFA Dance student, William B. McClellan, Jr.. William performed in our 2013 Power Center concert, Translation, and his powerful dancing on this stage lives on vividly. He passed last spring, just weeks after completing his Master’s program. In Memoriam William: both you and your family are in our thoughts and performances tonight.

Currents & Crossings celebrates the immense talents of our four choreographers, dancers and collaborators, in close partnership with SMTD’s University Productions team. It’s been an honor creating concerts with all of you these past
eight years.