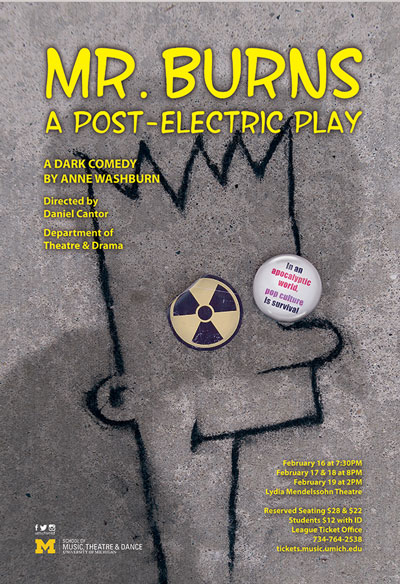 Imagine waking up to a world devoid of electricity – everything wiped out, with no backup in sight. That’s just the case for a group of nuclear catastrophe survivors gathered around a campfire attempting, for comfort and distraction, to recall an episode of The Simpsons, “Cape Feare.” Seven years on, with the grid still down, these recollections have become a booming theatrical business; transient theatrical troupes compete to dramatize retellings of TV shows, complete with commercials, in an effort to entertain and survive. As decades pass, will these stories from popular culture evolve into legendary new classics?

“When was the last time you met a new play that was so smart it made your head spin? Well get ready to reel…Anne Washburn’s downright brilliant Mr Burns: A Post-Electric Play has arrived to leave you dizzy with the scope and dazzle of its ideas” Ben Brantley, New York Times. Intrigued by the question of what happens to common culture after the death of civilization, playwright Anne Washburn gathered a group of artists in 2008 to retell a story simply by collective memory. These sessions formed the foundation for Mr. Burns, which premiered at the Woolly Mammoth Theatre in 2012. “Ms. Washburn makes us appreciate anew the profound value of storytelling in and of itself and makes a case for theater as the most glorious and durable storyteller of all (New York Times).” Join us for a fascinating journey into the end of the world. 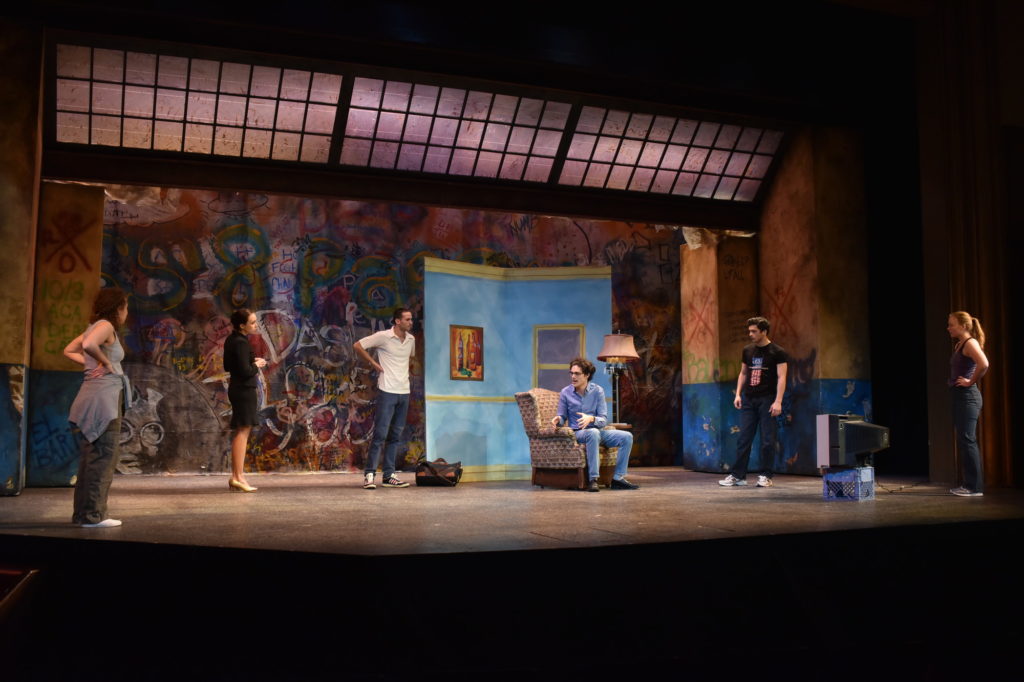 Act I and II

It’s important that I don’t tell you end of this story. It would ruin it. Suffice it to say that Mr. Burns: A Post-Electric Play – a great story in and of itself – examines the very nature of story-telling. Though I can tell you that the story begins, as the first human storytelling likely began, around the light of the campfire. And the story ends, rather more complexly, but still in relation to light.

Exactly why human beings represent their experiences and their fantasies in stories may be too complex to be completely understood. What we do know is that the need for story is universal – it is a pillar of the human experience, ubiquitous across time and culture. In his book, Three Uses of the Knife, David Mamet suggests that storytelling is fundamentally an exercising of our adaptive capacity – the very thing that has enabled us to survive. Certainly, for the characters in Mr. Burns, storytelling is tantamount to survival.

All cultures need to tell stories, and our stories themselves are connected – iterative variations of one another. Bugs Bunny was born from Br’er Rabbit, who in turn was born from African folklore. Many of Shakespeare’s basic story lines existed before he wrote his plays. The stories of the gods and heroes of 12th Century BC Greece were transmitted orally for four hundred years, written down in the 8th century BC (very appropriately for the purposes our play by Homer in The Iliad and The Odyssey), only eventually to be adapted into dramatic works in the 4th century BC by Sophocles, Aeschylus, and Euripides. The citizens going to see the plays at the Festival of Dionysus all knew these stories already. What they were going to see was Euripides’ latest spin. And that spin was, obliquely or directly, a response to present-day times.

Similarly, Mr. Burns is in some ways an age-old story, a variation on a theme. It is at once universal and a product of its times. It is highly referential, and its main reference – The Simpsons – is perhaps one of the most referential story forms ever, each episode packed with scores of references to popular culture, literature, and history. This kind of layered referentiality, sometimes ironic, sometimes sincere, creates its own unique aesthetic that our cave painting ancestors would be baffled by. What they would recognize in Mr. Burns, however, is this: sometimes the closest we human beings can get to expressing our awe – at the beauty and brutality of the world, at the inextricability of life and death – is by telling a story around the campfire.