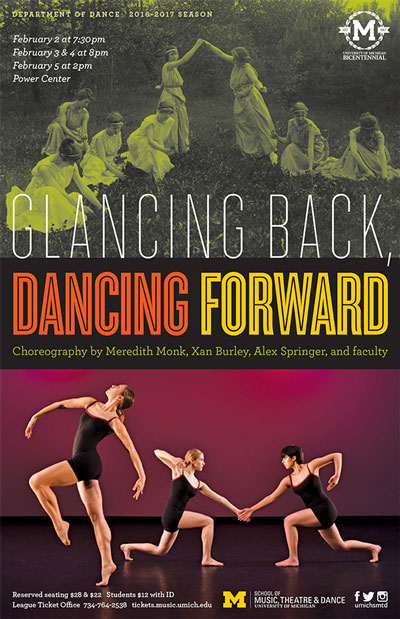 As part of the commemorations of U-M’s bicentennial year, Glancing Back, Dancing Forward celebrates the long presence of dance on campus through a fast-paced collage of dance works old and new. Faculty choreographers Missy Beck, Amy Chavasse, Bill DeYoung, Peter Sparling, Sandra Torijano, and Robin Wilson contribute short pieces that acknowledge Michigan’s distinctive dance tradition of experimentation and growth. With music ranging from Stravinsky to Reich to Piazzolla, this collage is a thrilling collaboration of dance styles. Alumni Xan Burley and Alex Springer return to create Spelled Like the Dawn, set to John Luther Adams’s vivid songbirdsongs. In addition to performances on stage, Dance Department chair Jessica Fogel curates a lobby installation chronicling the history of dance at the University.

Highlighting the concert are three excerpts from Quarry by National Medal of Arts recipient Meredith Monk (watch parts of the work on her YouTube channel: mmonkhouse.) First produced in 1976 at Brooklyn Academic of Music, Quarry confronts the paradox of human extremes during wartime. The work won a special citation at the Obie Awards that year. “Meredith Monk’s strange and beautiful creations are mixtures of music, dance, and theater. Images, both visual and aural, are arranged and paced with masterly theatrical craft to produce works that are strikingly original and hauntingly effective. (John Mueller, Dance Magazine).” This restaging by former company member Paul Langland marks only the second time parts of the dance have been performed since its premier.

Glancing Back, Dancing Forward:
A Dance and Photography Installation

A musical collage that includes excerpts from:
“12 Graz Waltzes, D.924, Op.91, No.4” by Franz Schubert
“Albumblatter, Opus 124, No 16, Schlummerlied in E Flat Major” by Robert Schumann
“Double Portrait” by David Borden
“Eight Pieces for Piano, Op. 88, Burlesque” by Alexander Tcherepnin
“I Want to Go Back to Michigan” by Irving Berlin
“Mountain Belle Schottische” by Charles Kinke

Notes: Inspired by the photographs and artifacts on exhibit, performers reenact creative investigations from dance courses dating from 1909 through the 1930s — an early history of dance at U-M which is not well known. Elements of courses in Swedish gymnastics, clogging, playground games and dances, aesthetic dancing, and natural dancing are on display. The piece includes phrases from Water Study, an iconic 1928 work choreographed by modern dance pioneer Doris Humphrey, first performed by dance students at U-M in 1934 at the Lydia Mendelssohn Theatre. Within the performance, the dancers bring activities into the present, performing studies they created in their composition course in Fall 2016. 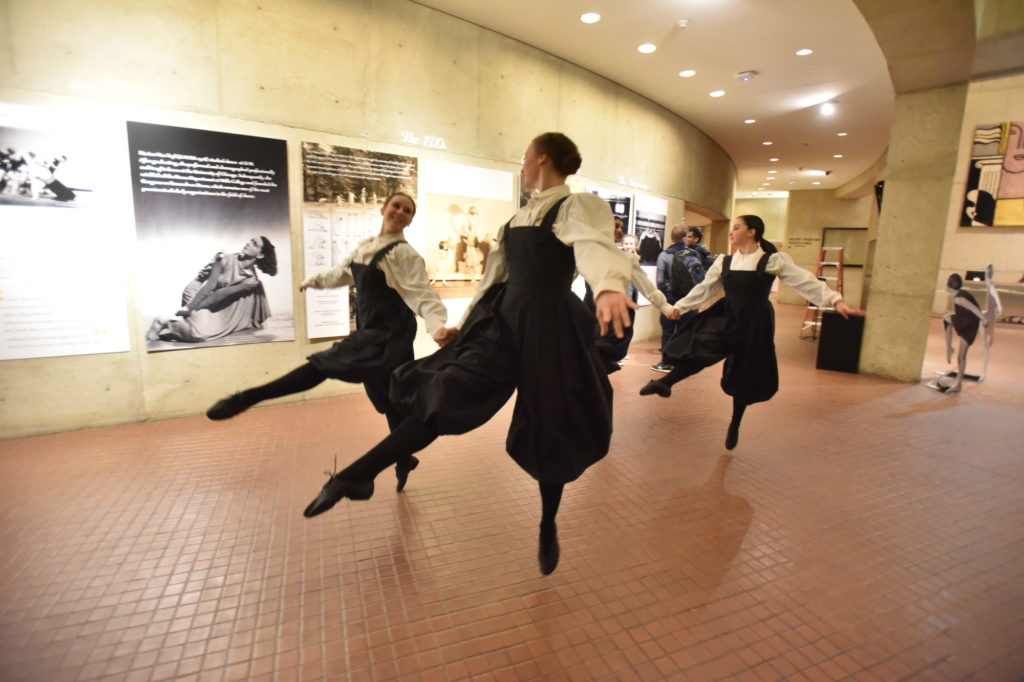 Choreographer‘s note: Thanks to 50 years of U-M dancers who sent me their 10-second iPhone video signatures from near and far to make this video tribute montage for U-M’s bicentennial.

Choreographer’s note: The dance is named for the Ndebele women of Zimbabwe and inspired by the elaborately painted interiors and exteriors of their homes and encampments. 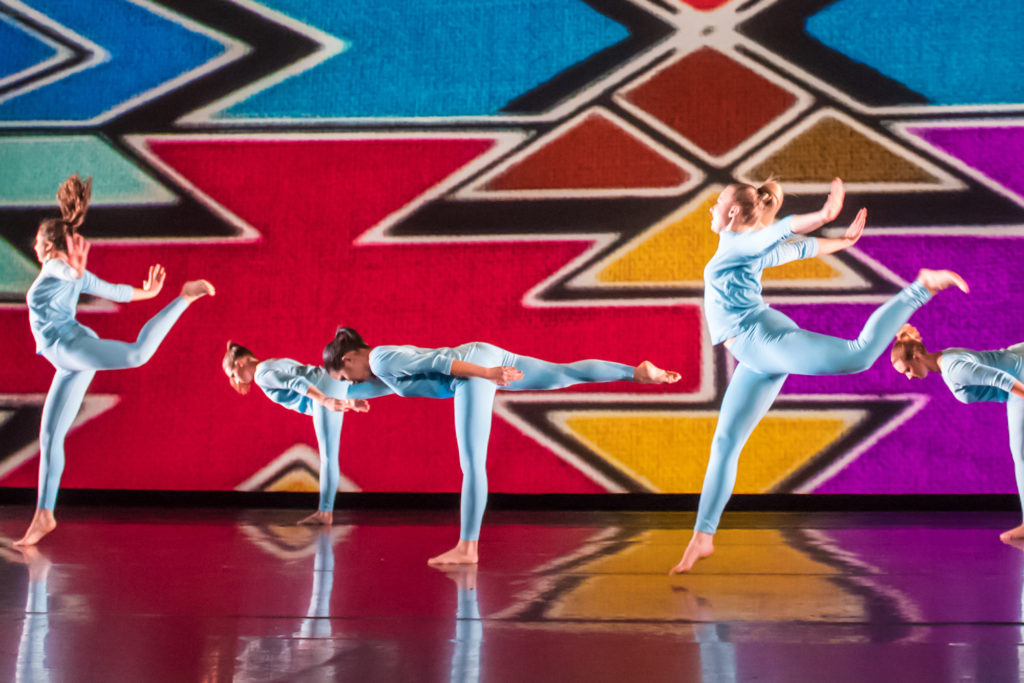 Choreographer’s note: Unlike artists who don’t tinker with their work once complete, I am a hopeless “tinker-er.” When revamping one of these living entities, I am challenged to create new material that both honors the original work and reflects my current creative voice. I first created this duet in 2006, as part of a larger work set to U-M composer Leslie Bassett’s Six Piano Pieces – an elegant and haunting work with deceptive simplicity.

In each of the four iterations I’ve done of this duet, the title, music, costumes, and dancers changed. I pull inspiration from my dancers and their unique chemistry. If something does not suit the new pairing, I’ll alter that material in conjunction with the dancers. Consequently, the duet is never the same work twice but instead is a variation on a theme. I vividly remember hearing that artist Pierre Bonnard couldn’t stop fiddling with his finished paintings, “He was known to go to great lengths to rework a painting, ‘using friends to distract guards in museums, or turning up at collectors’ houses with a small paint-box in his pocket.” What you’re seeing today is me with my paint-box in my pocket.

Choreographer’s note: Impetus: Etymology from Latin, the force of energy with which the body moves. In this work, I represent the force and spirit of the will when life challenges us to be strong; the decision to be present with passion and power without diminishing vulnerability and tenderness. Thanks to the cast for all their hard work and Peter Sparling. 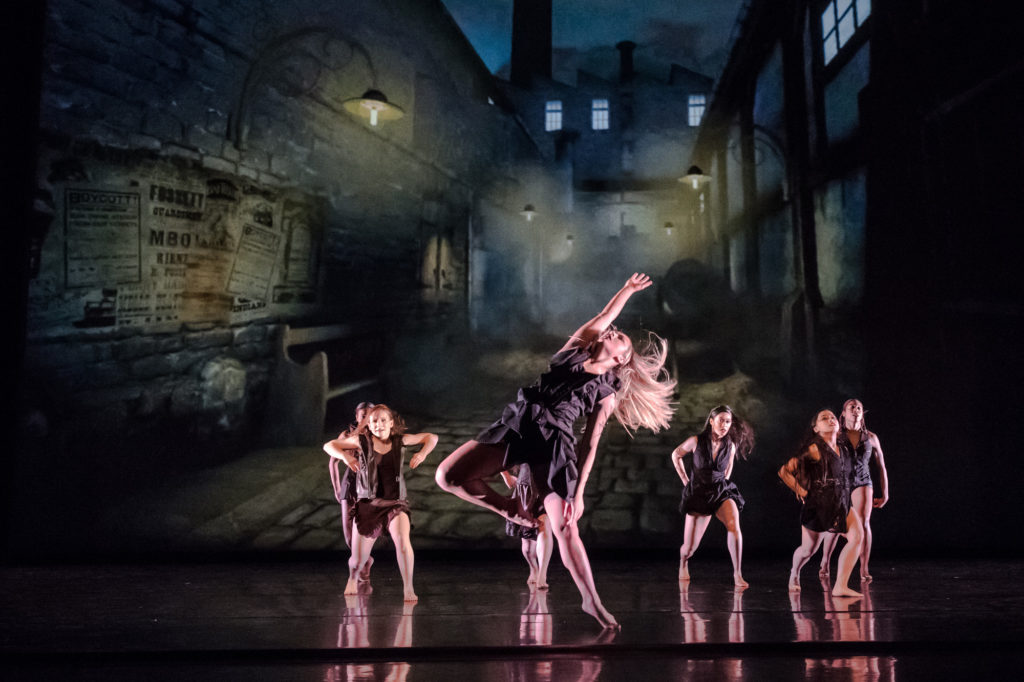 Choreographer’s note: In 1840, Robert Schumann composed the song “Widmung” as a love song to his wife for their wedding day. Franz Liszt later transcribed the song into a virtuoso piano solo. Both born in the same decade as U-M’s founding, Liszt and Schumann’s work was chosen in celebration of the Bicentennial. Motorium (the area of the brain involved in movement), is a look back to our roots in ballet, which then evolves into a more contemporary style. This progression is an artistic and visual parallel to the evolution of the 200-year history of U-M.

Motorium is my debut work for the Department’s Power Center concert. I am grateful to all of my colleagues for their support and encouragement over the years, with a special shout out to Angela Kane, Peter Sparling, Jessica Fogel, and Mary Cole. A special thanks also to Judy Rice for her input and ideas, as well as Soultana Schiavi who was the muse for the coming together of this work. A thank you to Desmond Richardson for his artistic input and coaching. I am grateful to Christian Matijas Mecca who supported my desire for live music and arranged for the pianists.

Choreographer’s note: The choreography is informed by two brief pieces composed by Igor Stravinsky; he honors those who were good friends and patrons of his work at their passing. 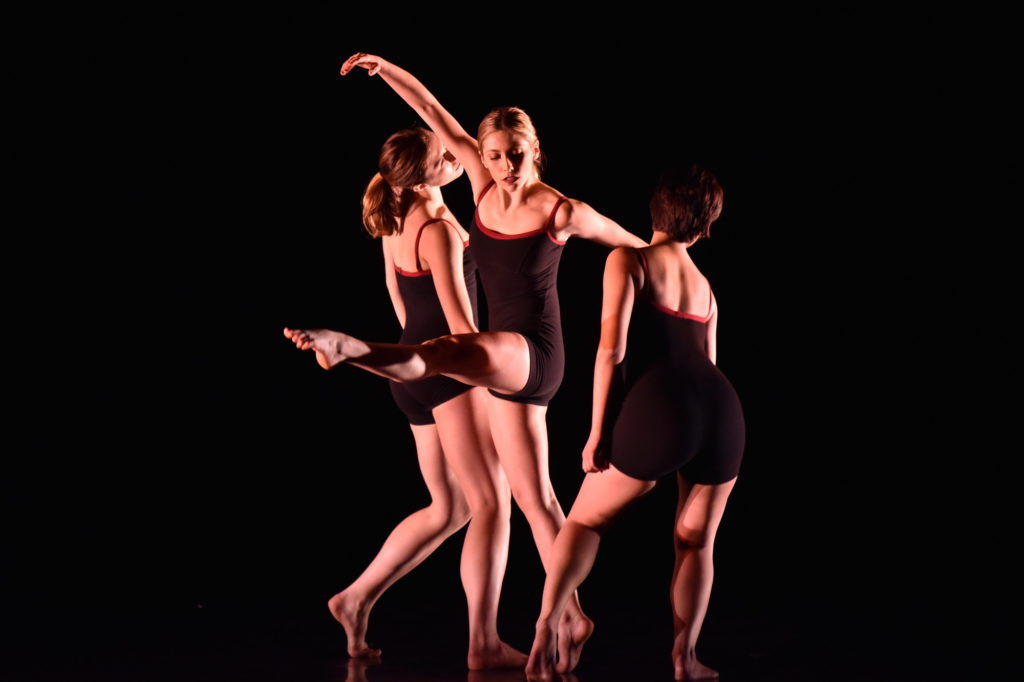 Choreographer’s note: Warm thanks to the cast, my collaborators for this three-minute adventure. I want to put my dancing arms around you. 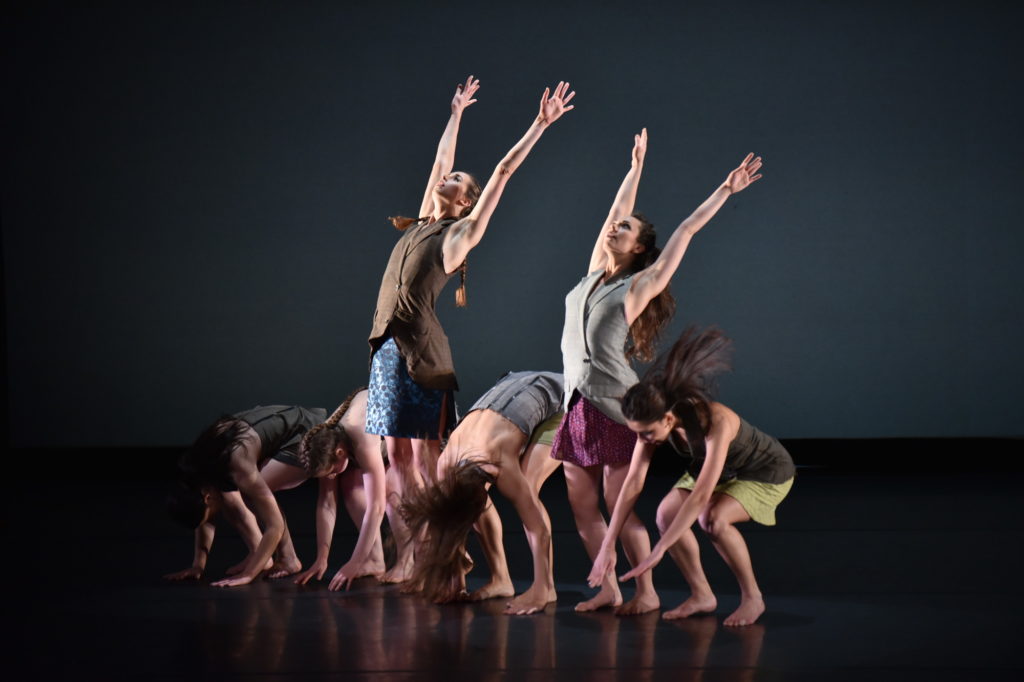 Choreographer’s note: A celebration of different dances from the south, west, and north of the Kongo. 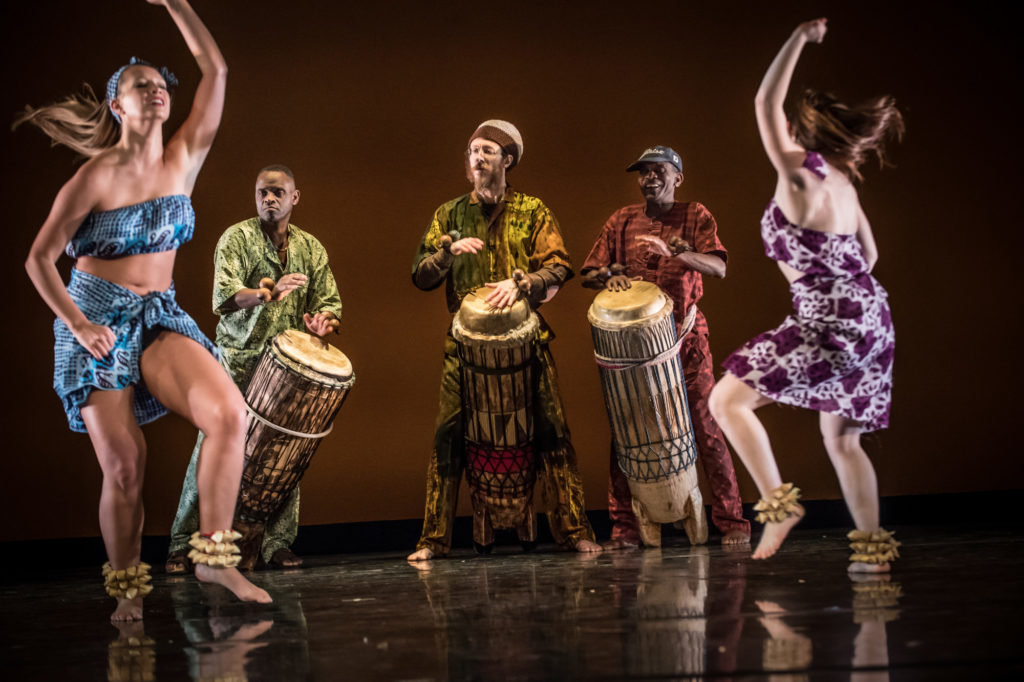 Suite from Quarry: an opera in three movements (1976)

Choreography and music by Meredith Monk
Restaged by Paul Langland

Choreographer’s note: “Quarry: an opera in three movements” composed, directed and choreographed by Meredith Monk, is a mosaic of music, images, movement, dialogue, film, sound and light, and premiered at La Mama ETC in New York City in 1976. It is considered by many to be a masterwork of the 20th Century, with revivals taking place in 1985 and 2003. Monk calls the three movements of the OBIE Award-winning work “Lullaby,” “March,” and “Requiem.” “Quarry” centers on the anguished reverie of a child sick in bed (the role Monk originated), a dream that gradually mutates into a nightmare. The child’s illness is a metaphor for the darkness of the world at war.

As described by Alan Kriegsman of The Washington Post in 2003, “’Quarry’ immerses us in the atmosphere and tenor of the period of World War II, the emergence of Nazism, and the Holocaust…by [evoking] feelings, imagery and sensuous characteristics that are associated with these roots through the power of Monk’s multimedia but non-literal treatment. What is most disturbing and urgent about seeing ‘Quarry’ today is that it resonates with the most fearful anxieties and perils of our time.”

Suite from “Quarry” is taken from the second movement, “March.”

Choreographer’s note: Spelled Like the Dawn was made in collaboration with our incredible cast of performers during the week of the 2016 election. The title represents the promise of waking up, both to the process of mourning and to the bright light of morning – a bright, but ever-challenging future undertaken by the generations alive now and those yet to come. We felt especially hopeful in the midst of our cast and their fellow classmates – people tirelessly embodying compassion, empathy, and the will to keep moving despite despair. Together we made a work that touches at times on the collective force of forward motion, on relentless turmoil, on willful convergence.

We are endlessly grateful to these young folks who generously came to each rehearsal with renewed passion, for their constant inquiry as artists and for their unwavering courage. It was a special gift to see the light of creative thought alive and well at our alma mater. We thank, with deep love and admiration, our professors who once instilled in us the fire to make art and continue to inspire us with their devotion to this field. We got to come home, and coming home was transformative. 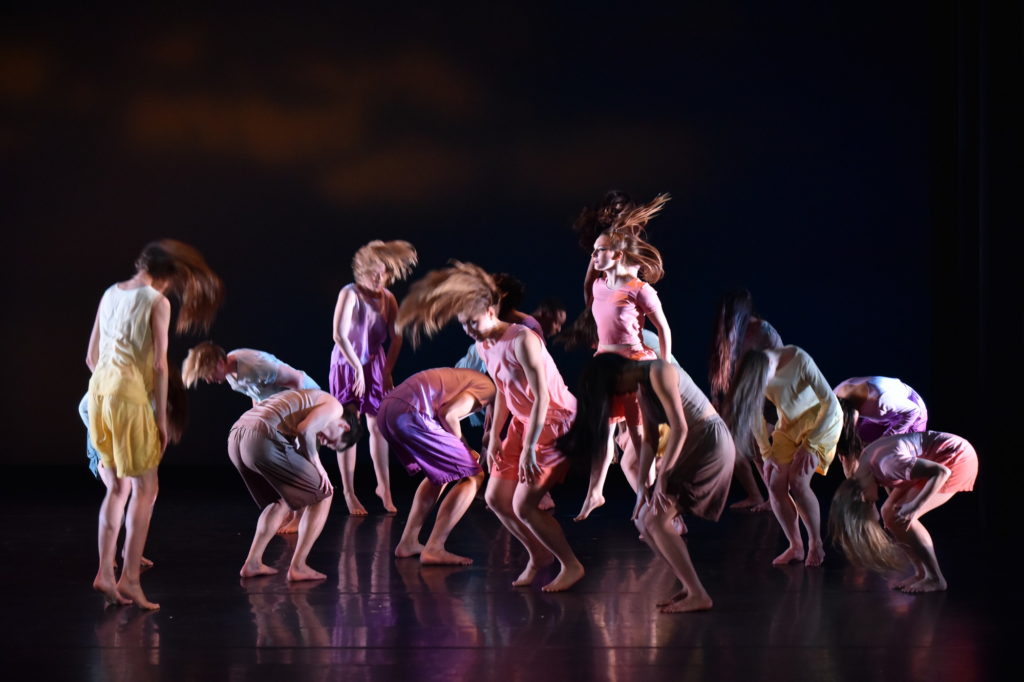 Lobby installation sponsored by the University of Michigan Bicentennial

It’s not often a 200th anniversary comes around, and what better way to celebrate than to dance? As displayed and embodied in Dance-Department-chair Jessica Fogel’s lobby installation, dance at U-M has a long history to celebrate. Dance had its beginnings at Michigan in women’s physical education and aesthetic dancing courses. As modern dance took hold through the 30s, 40s, and 50s and began to build its legacy as one of the great American inventions of the 20th century, U-M became an outpost and stopping point for many dance luminaries and companies. The old Barbour Gym housed a thriving population of eager dancers and invested faculty. When the Power Center was completed in 1971, the dance program graced its stage with its annual performances of faculty and guest choreographers’ works. By 1974, Dean Paul Boylan and U-M Regents deemed us worthy of a degree-granting department and a new building under the aegis of the School of Music.

Forty-three years later, we have cause to be both celebratory and newly committed to a deeper engagement with the world, and how the arts speak to global issues, events and the movements of isolated communities or entire populations. The Faculty Collage portion of this year’s concert features our stellar and eclectic faculty with an array of dance offerings ranging from elegiac and meditative to passionate and exuberant. We showcase the extraordinary talents of two alumni in the new creation by Xan Burley & Alex Springer, recipients of our School’s 2015 Emerging Artist Award. Together with their cast, they bring to the stage a different generational landscape, with hybrid movements and innovative choreographic construction that challenge the cast and the audience to look at human motion anew.

The centerpiece of Glancing Back, Dancing Forward is Meredith Monk’s searing and disturbing indictment of a not-so-distant totalitarian state and the toll it takes on its inhabitants. A demagogue dictates to his followers, and the masses morph in a highly controlled rhythmic frenzy, first rallying to his cause then becoming doomed victims awaiting their fate.

Dance has always lifted up a lens to the world: a prism of its glorious colors, refined gestures and exhilarating expressions, as well as a reflection of its darker side and of the full spectrum of the human condition. Our faculty’s mentors and inspirations — Martha Graham, José Limón, George Balanchine, Jerome Robbins, Pina Bausch, Bella Lewitzky, Donald McKayle, Robert Ellis Dunn, Elena Guttiérrez, Dianne McIntyre, and Susan Zaliouk, to name a few — set the standard of commitment and aspired towards making dance a legitimate art form. We proudly carry that legacy into U-M’s third century.

← Peter and the Starcatcher Mr. Burns: A Post-Electric Play →