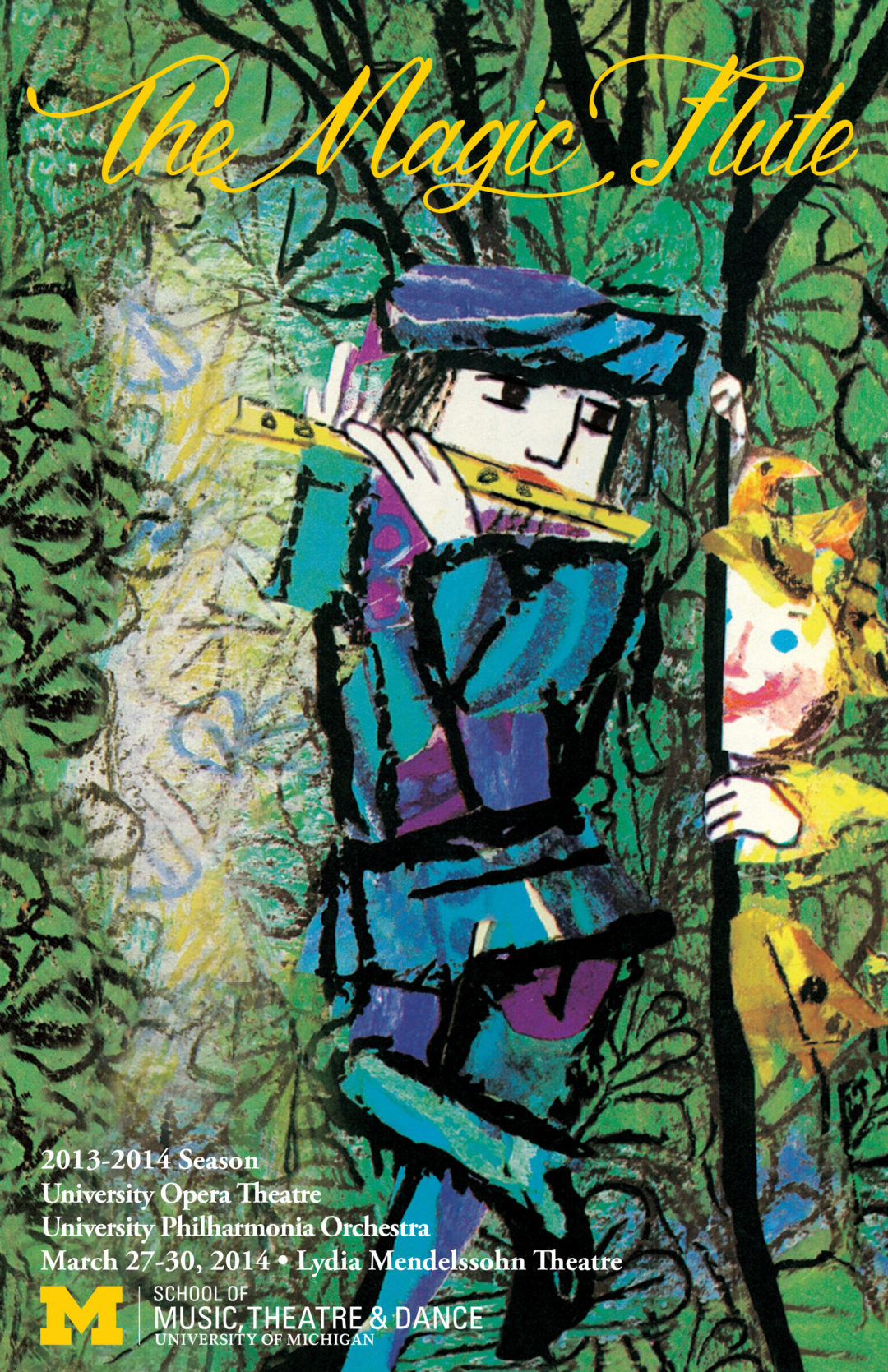 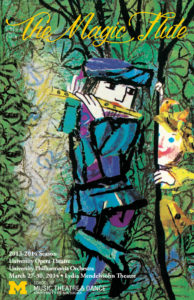 In the traditions of all the best fairy tales, a handsome youth is armed with magic devices to protect him form harm, and sets out to free a beautiful princess from a wicked sorcerer. He encounters abundant mishaps, deception and magic in a fierce battle of good versus evil. But The Magic Flute is more than an amazingly bewitching tale of danger and tenderness, suspense and romance. Completed only a month before his untimely death, The Magic Flute shows Mozart’s genius at its highest, for he fuses into one rich work beautiful arias with whimsical interludes, sweeping melodies with vocal fireworks, and the serious with the comic. And as all good fairy tales should end, love triumphs, with the youth and princess living happily ever after. 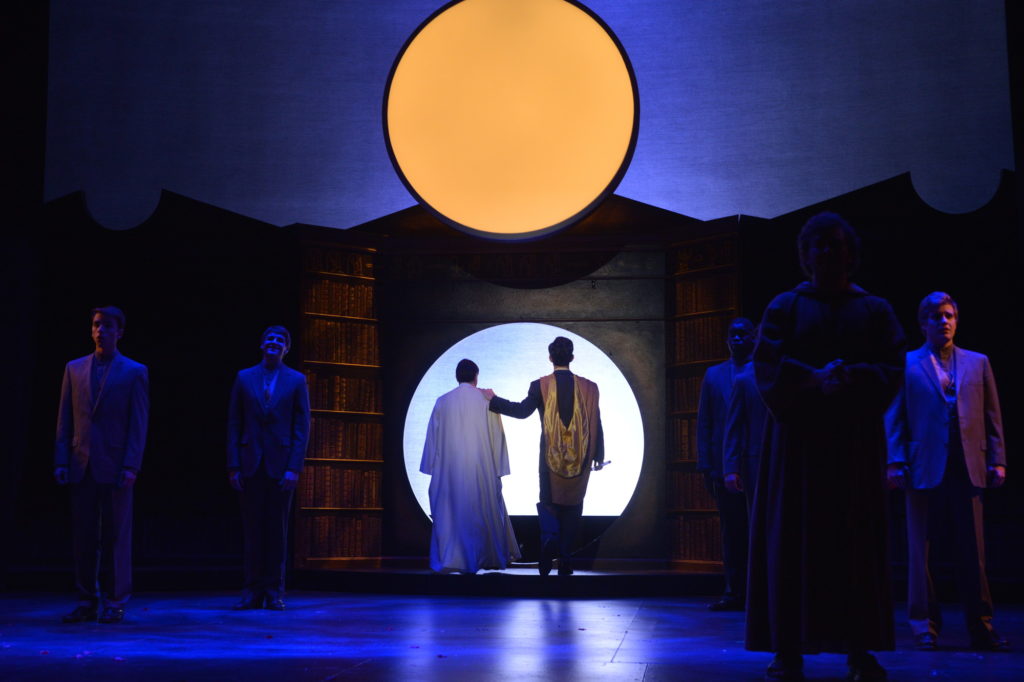 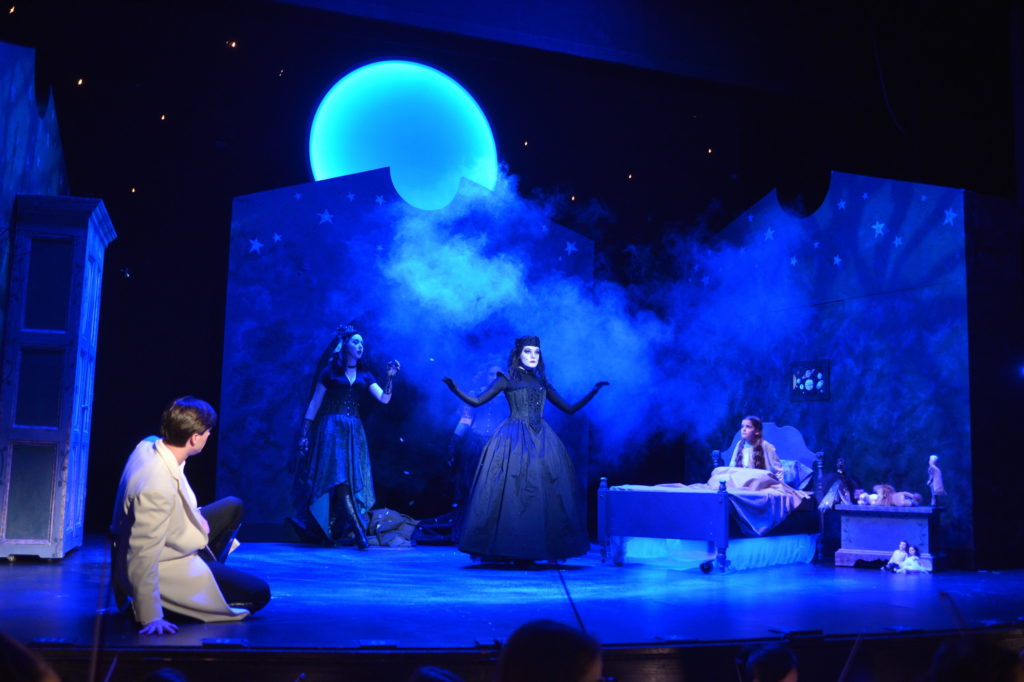 Alone in the middle of the night, a young child hears her parents fighting. She tries to find comfort and sweeter community in her books and toys, but is troubled by fears of monsters in the dark, loneliness, and the unknown. She tries to read under the covers for protection, and perhaps dozes off. From the armoire across the room, there is a rattle. A prince, Tamino bursts in, pursued by a dragon. Three ladies in the service of the Queen of the Night appear to save Tamino from the dragon. When they leave to tell the Queen, the bird catcher, Papageno appears. He boasts to Tamino that it was he who killed the creature. The ladies return to give Tamino a portrait of the Queen’s daughter, Pamina, who they say has been kidnapped by the evil sorcerer, Sarastro. Tamino immediately falls in love with the girl’s picture, and the magic image it produces. The Queen, appearing in a burst of thunder, tells Tamino about the loss of her daughter, and commands him to rescue her. The Ladies give a magic flute to Tamino, and silver bells to Papageno to ensure their safety on the journey, and appoint three spirits to guide them. Inside the realm of Sarastro, his slave Monastatos pursues Pamina, but is frightened away by Papageno. The bird catcher tells Pamina that Tamino loves her and is on his way to save her. Led by the three spirits to the temple of Sarastro, Tamino learns that it is the Queen, not Sarastro, who is evil. Tamino charms wild animals with his flute, then rushes off to follow the sound of Papageno’s pipes. Monastatos and his men chase Papageno and Pamina, but are left helpless when Papageno plays his magic bells. Sarastro enters in great ceremony as his people express their love and honor for him. He punishes Monastatos and promises Pamina that he will eventually set her free. Pamina and Tamino meet before he is led into the temple with Papageno.

Sarastro tells the priests that Tamino will undergo initiation rites, and that Tamino is the one mentioned in the writ of wisdom who is to take over the kingdom with his true love. Monastatos, after having been beaten for attempted rape, still tries to kiss the sleeping Pamina, but is surprised by the appearance of the Queen of the Night, who invades Pamina’s dream to give her daughter a dagger and command her to kill Sarastro. Monastatos tries again to seduce Pamina and is stopped by Sarastro, who finds the desperate Pamina and consoles her. In the Hall of Trials, Tamino and Papageno are told by the ancient priest that they must remain silent and are not allowed to eat. The three spirits reappear to guide Tamino through the rest of his journey and to tell Papageno to be quiet. Tamino remains silent even when Pamina appears. Misunderstanding his vow of silence for coldness, she is heartbroken. Tamino passes to the final tests, and faces death as he considers the Trial by Fire and Water. Although terrified, he boldly rushes to begin. Hearing Pamina’s voice, he stops and the lovers are reunited. Pamina enters in Initiate’s robes and they face the ordeals together, protected by the magic flute. In a final battle, the Queen of the Night, her three ladies, and Monastatos attack the temple, but are defeated. Sarastro blesses Pamina and Tamino as all Sarastro’s people converge in the child’s room for a morning birthday breakfast, and hail the triumph of courage, virtue, and wisdom as the dazzling morning sun wipes away the terrors of the night.