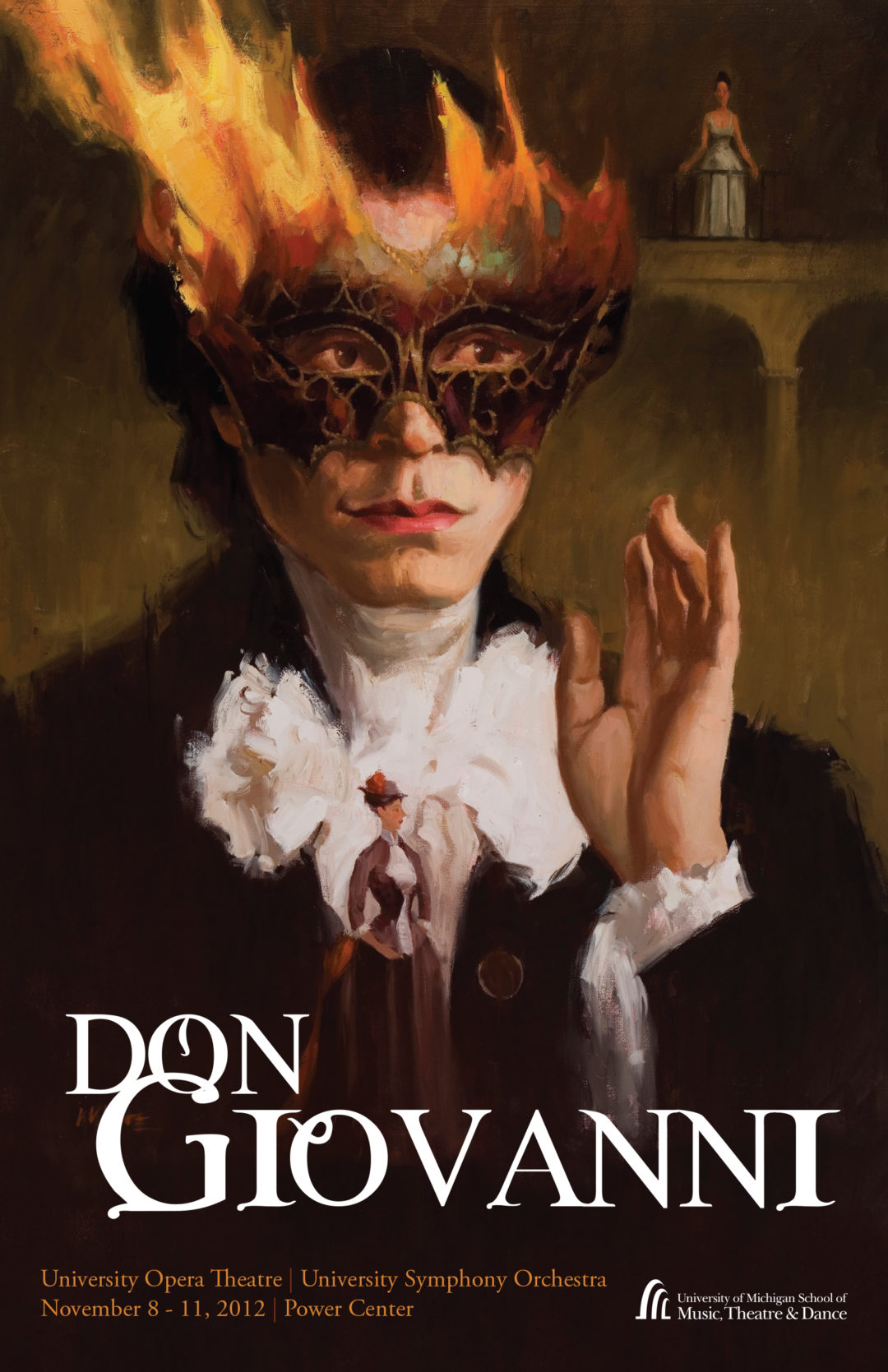 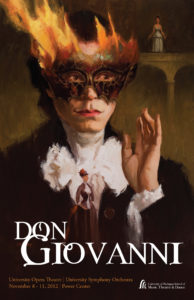 The Story: Based on the story of the libertine Don Juan, the opera tells the tale of Don Giovanni, a reckless philanderer who seduces women (more than 1000 according to his carefully detailed catalog) in total disregard for civil and divine authority. But in the wake of a life lived to excess, his day of reckoning finally approaches. Caught in the act of seducing the Commendatore’s daughter Donna Anna, Giovanni accidentally kills the Commendatore when he comes to defend his daughter’s honor. After more misdeeds and attempted seductions, Giovanni finds himself pursued by those he has wronged. Hiding in a churchyard, he unexpectedly meets the specter of the Commendatore in the form of a statue. Still unabashedly defiant, Giovanni invites the statue to supper, only to discover the irrevocable consequences for his dissolute actions as the statue exacts his revenge.

Background: From the commanding opening chords of the overture, through brilliant arias and ensembles, to the shattering music of Giovanni’s damnation, Wolfgang Amadeus Mozart displayed his highest operatic genius in this musical version of the Don Juan myth. Stunning orchestral composition supports the blending of stark tragedy and high comedy that was innovative at the opera’s premiere in 1787. George Bernard Shaw considered Don Giovanni to be the greatest opera ever composed: “…eminent in virtue of its uncommon share of wisdom, beauty, and humor.” Fusing melodies of exquisite beauty with comedy and dark rumblings of eternal damnation, Don Giovanni continues to captivate along with its engimatic leading man. 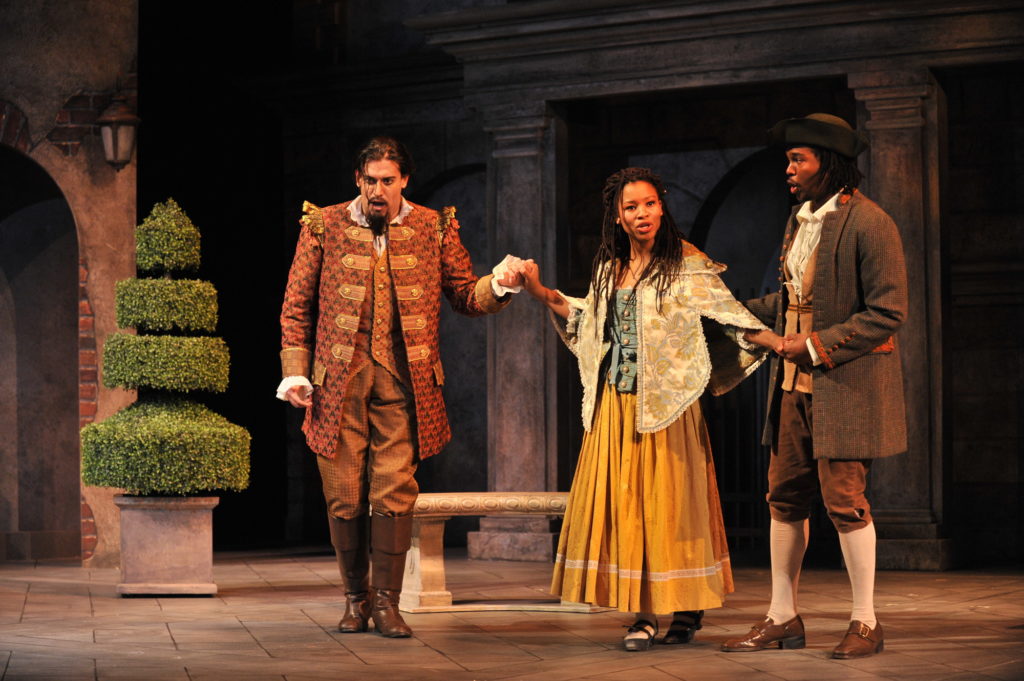 In the morning, Giovanni and Leporello encounter one of Giovanni’s former conquests, Donna Elvira, who is devastated by his betrayal. Leporello tells her she is neither the first nor the last woman to fall victim to Giovanni and shows her his catalogue with the name of every woman Giovanni has seduced.

Peasants celebrate the marriage of Masetto and Zerlina. Giovanni flirts with the bride, telling her she is destined for a better life. But Elvira tells Zerlina to flee her suitor. She also warns Anna, who is still unaware of the identity of her father’s murderer and has asked Giovanni for help in finding the man. Giovanni, for his part, insists that Elvira is mad, and Anna and Ottavio wonder what to believe. As Giovanni leaves, Anna suddenly recognizes his voice as that of the murderer. Devastated but determined, she once more asks Ottavio to avenge her.

Outside Giovanni’s home, Zerlina asks Masetto to forgive her. Giovanni enters and leads them both inside. Anna, Elvira, and Ottavio appear masked and are invited in by Leporello. In the ballroom, Giovanni dances with Zerlina, then tries to drag her into the adjoining room. When she cries for help, Giovanni blames Leporello. Anna, Elvira, and Ottavio take off their masks and, along with Zerlina and Masetto, accuse Giovanni, who is momentarily surprised but manages to slip away.

Having exchanged clothes with Giovanni, Leporello takes Elvira on a night-time walk, leaving his master free to serenade her maid. When Masetto arrives with a band of peasants to hunt down Giovanni, the disguised Don sends them off in various directions, then beats up Masetto. Zerlina finds her bruised fiancé and comforts him.

Later that night, Leporello—still believed by Elvira to be Giovanni—is surprised by Anna, Ottavio, Zerlina, and Masetto, who all denounce the supposed Don. Fearing for his life, Leporello reveals his true identity before making his escape. Ottavio proclaims that he will take revenge on Giovanni and asks the others to look after Anna. Elvira thinks about Giovanni, whom she still loves in spite of everything.

In a cemetery, Giovanni and Leporello meet the statue of the Commendatore, who warns Giovanni that by morning he will laugh no longer. Giovanni forces the terrified Leporello to invite the statue to dinner. The statue accepts. Once again, Ottavio asks Anna to marry him, but she replies that she will not until her father’s death has been avenged.

Elvira arrives at Giovanni’s palace and makes a last desperate attempt to persuade him to change his life, but he only laughs at her. The figure of the Commendatore enters and asks Giovanni to repent. When he boldly refuses he is consumed by flames. Elvira, Anna, Ottavio, Zerlina, Masetto, and Leporello appear, contemplating their futures and the fate of an immoral man.

Mozart and DaPonte’s Don Giovanni, based on the Don Juan character from earlier works of Tirso de Molina and Molière, is a classic tale of seduction and betrayal, originally set in 17th century Spain. Our production transposes the setting to New Orleans in the 1780s – during the time that Mozart wrote the opera, when The Big Easy was under Spanish rule. This provides us with a steamy, supernatural atmosphere exemplified by the swampy above-ground cemeteries, the lusty intrigue of the masked Carnivale (Spanish version of Mardi Gras), and the colorful contrasts between Spanish Colonial and Creole cultures – a perfect playground for Giovanni.

The libretto makes it clear what Giovanni does, but we don’t know from the text exactly what motivates him to do so. I think Giovanni is primarily a hunter, driven by the need to conquer. He says he must love all women so as to show no favoritism to only one, but his actions prove otherwise as with chameleon-like skill, he alters his looks and crafts an individualized strategy to provide what he believes will fulfill the wildest desires of each of his “prey” – going to whatever lengths necessary to add new data to his catalog.

The brilliance of this piece lies not only in the wonderfully sensual and colorful music that Mozart has created, but in the fact that such potentially touchy subject matter can still be balanced with such deliciously comic moments. No doubt, Giovanni has committed some violent and selfish acts – for which he certainly deserves the demise that comes to him – but we can still laugh at the way everything unravels on this one particularly bad day for him. Let us hope that better days lie ahead for all of us, and as they say in New Orleans: Laissez les bons temps rouler!

← Sunday in the Park with George Bat Boy, The Musical →