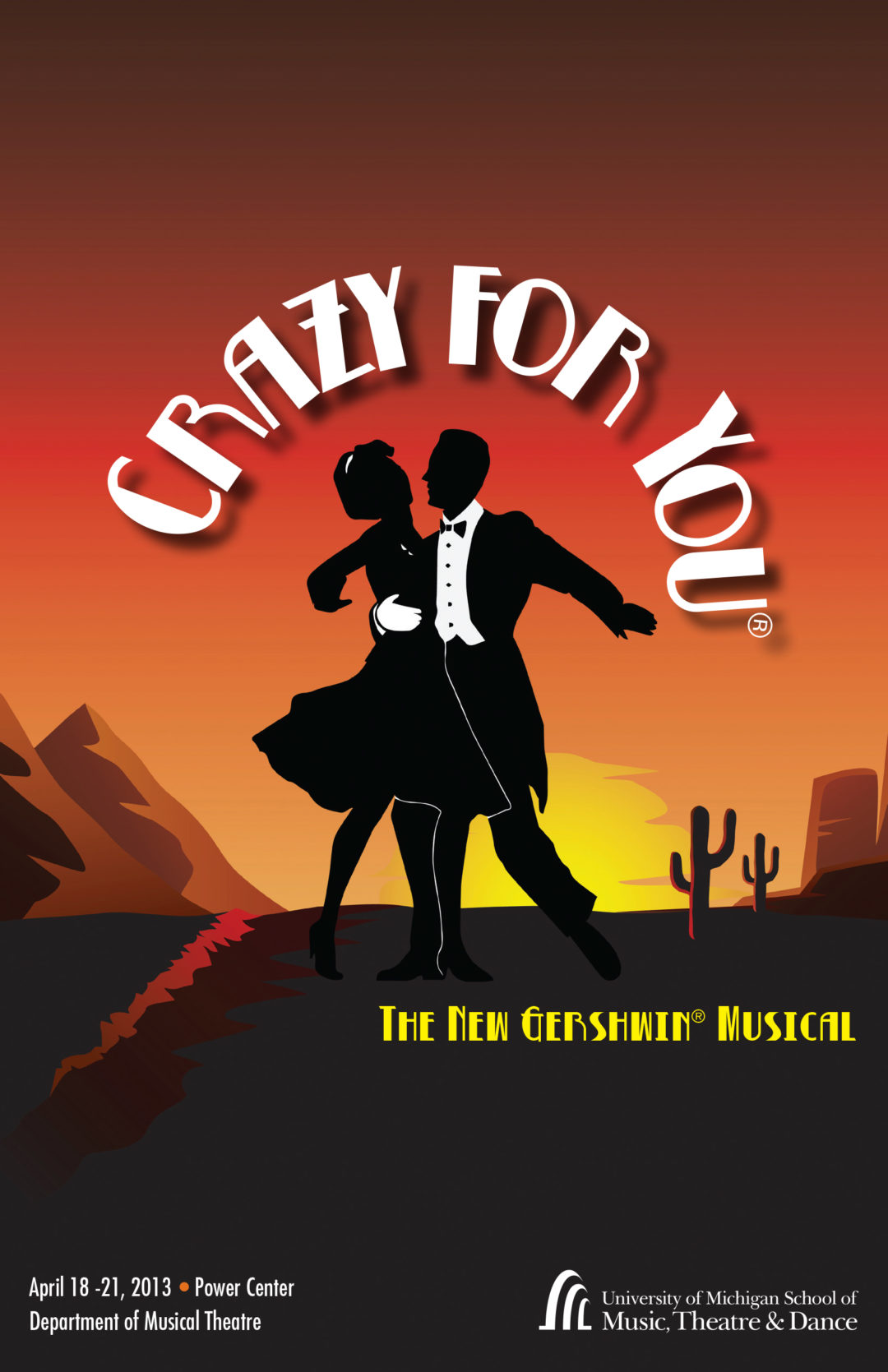 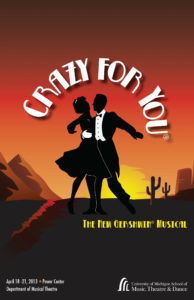 The Story: Bobby Child, a well-to-do playboy of the 1930s, yearns to dance on Broadway, but his mother expects him to join the family banking business. To get him away from the stage, she sends him to the small town of Deadrock, Nevada, to foreclose on the local theatre. Bobby arrives in Deadrock and promptly falls in love with the theatre owner’s daughter, Polly. Determined to fulfill all of his dancing dreams, Bobby hatches a scheme to save the theatre with a grand show featuring the townsfolk. However, the cowboys can’t dance, Polly hates him, and the show has no audience. Can Bobby save the theatre, become a star, and win Polly’s heart?

Background: When Crazy for You opened on Broadway in February, 1992, after a decade of British musical imports, Frank Rich of The New York Times declared “When future historians try to find the exact moment at which Broadway finally rose up to grab the musical back from the British, they just may conclude that the revolution began last night…A riotously entertaining show, Crazy for You uncorks the American musical’s classic blend of music, laughter, dancing, sentiment and showmanship.” Loosely based on the Gershwin’s 1930 musical Girl Crazy, playwright Ken Ludwig (Lend me a Tenor, The Beaux’ Stratagem) adapted the classic tale of boy gets girl after many obstacles and blended it with 19 of George and Ira Gershwin’s most beloved songs. The musical won the Tony, Drama Desk, and Olivier Awards for Best Musical. From “Embraceable You” to “I Got Rhythm” and “They Can’t Take that Away from Me,” Crazy for You is pure fun. 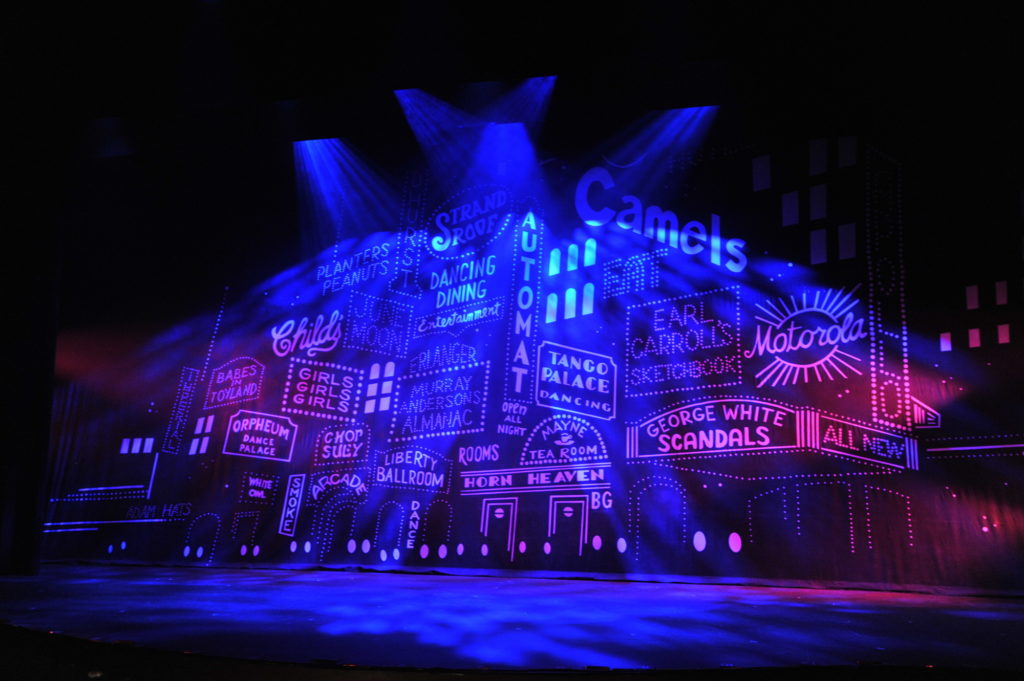 Funding for the recreation of the Stroman choreography made possible by generous support from the Benard L. Maas Foundation Guest Artist and Speakers Series. 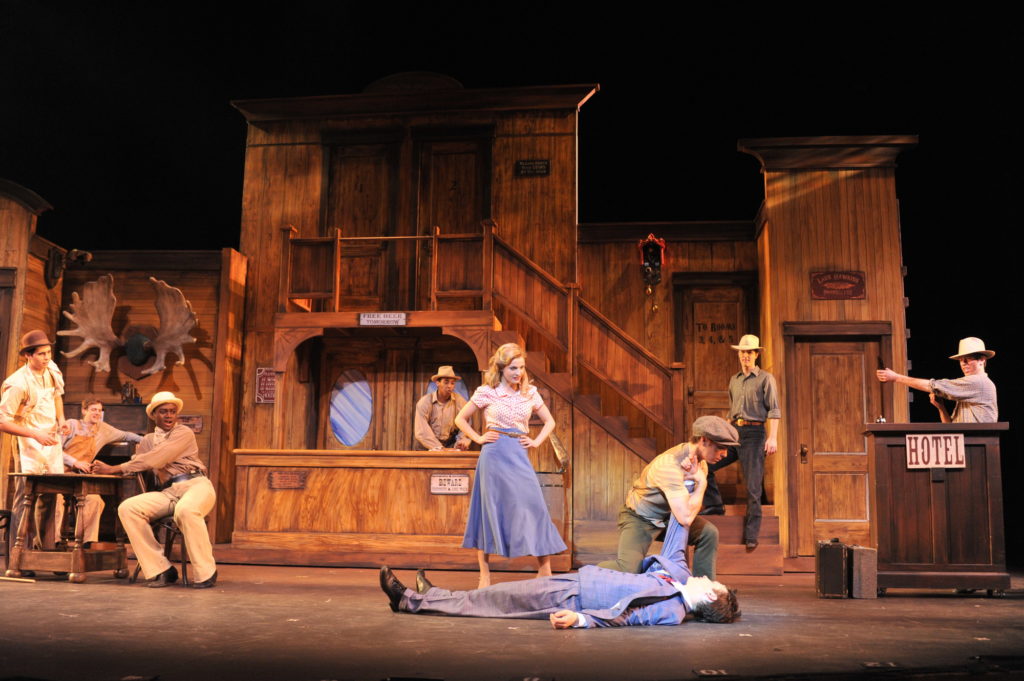 New York City, 1930s. Banking heir and show biz wannabe Bobby Child auditions for Broadway impresario Bela Zangler, but fails to make the grade. His mother demands that he give up his dreams of becoming a song-and-dance man and leave for Deadrock, Nevada, to foreclose on a long-empty theatre.

Once in Deadrock, Bobby meets Polly Baker, the only girl in town. In true musical theatre fashion, they sing, dance, and fall head-over-heels in love. When Bobby recognizes that Polly’s father owns the theatre he has come to claim, he convinces her they can put on a show to raise money and save the property. Polly is enthusiastic until she realizes that he is the banker who has come to foreclose on the property. She slaps him and runs away.

Bobby is determined to go ahead with the show, pay off the mortgage, and win Polly’s heart. He persuades his chorus-girl pals from Broadway to join him in Deadrock for the show. The town is soon swarming with Follies Girls, along with Bobby disguised as Bela Zangler. As rehearsals progress, “Bela” tries to persuade Polly to give Bobby another chance. Polly confesses she has already fallen in love with him – Bela! Not at all what Bobby planned.

On the opening night, the theatre is empty. Bobby, still disguised, apologizes for letting everyone down. Polly forgives him, saying he has brought a new spirit to their lives. As the townsfolk celebrate, the real Bela Zangler stumbles into the scene unnoticed and faints.

Later in the saloon, Bobby discards his disguise to show Polly that he is the man she loves, but the real Bela enters. Polly greets him with a kiss, as a despairing Bobby heads upstairs with a bottle of liquor. After Polly leaves, Bobby returns, falling down drunk, and, once again, dressed as Bela. There are now two Belas in the room, each too drunk to realize the other is there.

The next morning, Bobby and Bela awake with matching attire and hangovers. Bobby forgets he is still disguised and speaks in his normal voice. Polly storms out, furious that Bobby made her look like a fool.

Later, the company meets to discuss whether to attempt another performance. The vote is to give up, and Bobby leaves for New York. When Bela finally sees the theatre, he recognizes its potential and immediately starts working to bring the failed show back to life.

After a short time in New York, Bobby sees that he can’t live without Polly and heads back to Deadrock. Polly, now a star in Bela’s show, realizes that she wants to be with Bobby after all. They reunite and dance into the sunset together.

Ladies First – Opened at the Broadhurst Theatre, New York on October 24, 1918
“The Real American Folk Song (is a Rag)”

A Damsel in Distress – Released in November 1937 by RKO Pictures.
“I Can’t Be Bothered Now”
“Nice Work If You Can Get It”
“Stiff Upper Lip”
“Things Are Looking Up”

Shall We Dance – Released in May 1937 by RKO Pictures.
“Shall We Dance?”
“Slap That Bass”
“They Can’t Take That Away from Me”