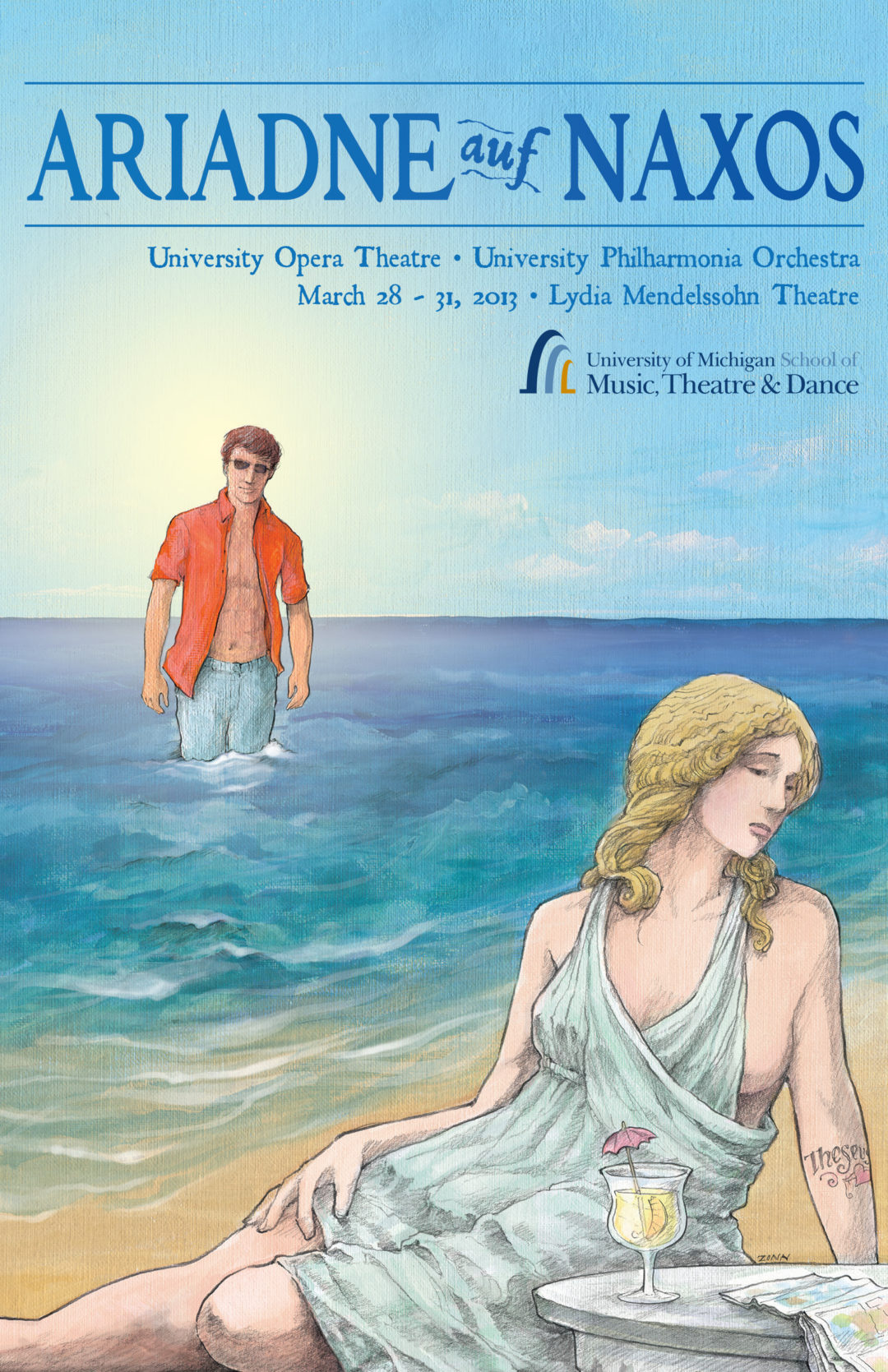 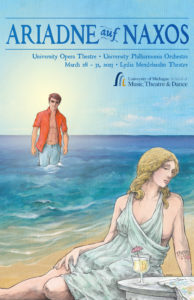 The Prologue: The richest man in Vienna has ordered a post-dinner entertainment for his guests. The Music Master complains that the new opera Ariadne auf Naxos is is to be followed by an Italian comedy, Zerbinetta and her Four Lovers. The Major Domo replies that his master has paid for what he wants. The young composer arrives, along with the two performing companies, and is made to feel distinctly unwanted. He is shocked to discover that Zerbinetta and the comedians are to perform after the premiere of his serious opera, and the Prima Donna objects to the rival female attraction. The Major Domo announces dinner has ended and that both opera and comedy must be played simultaneously so the fireworks can begin at 9 pm. The opera artists are horrified, but the comedians are happy to employ their improvisational skills. Zerbinetta is told the opera’s plot and devises a synopsis for the combined entertainment. She charms the composer, he passionately agrees on the compromise, and the performance begins.

The Opera: Three nymphs sing of the sadness of Ariadne, abandoned by Theseus. Ariadne bemoans her fate and Zerbinetta, with the comedians in the wings, suggests Harlequin sings a cheerful song. Taking no notice Ariadne calls for Hermes, the messenger of death. The male comedians attempt to divert her, but Zerbinetta sends them off-stage and confides with Ariadne about the plight of all women at the hands of faithless men, while declaring women should be just as fickle in love. Ariadne retreats into her cave and the comedians’ entertainment takes place with Harlequin winning Zerbinetta’s affections. The three nymphs herald the arrival of Bacchus, who has escaped the lures of the sorceress Circe. Ariadne believes him to be Hermes and offers herself up to him. Zerbinetta, in the wings, repeats her prediction: “a new god approaches and we surrender without a word,” while Ariadne and Bacchus declare undying love. 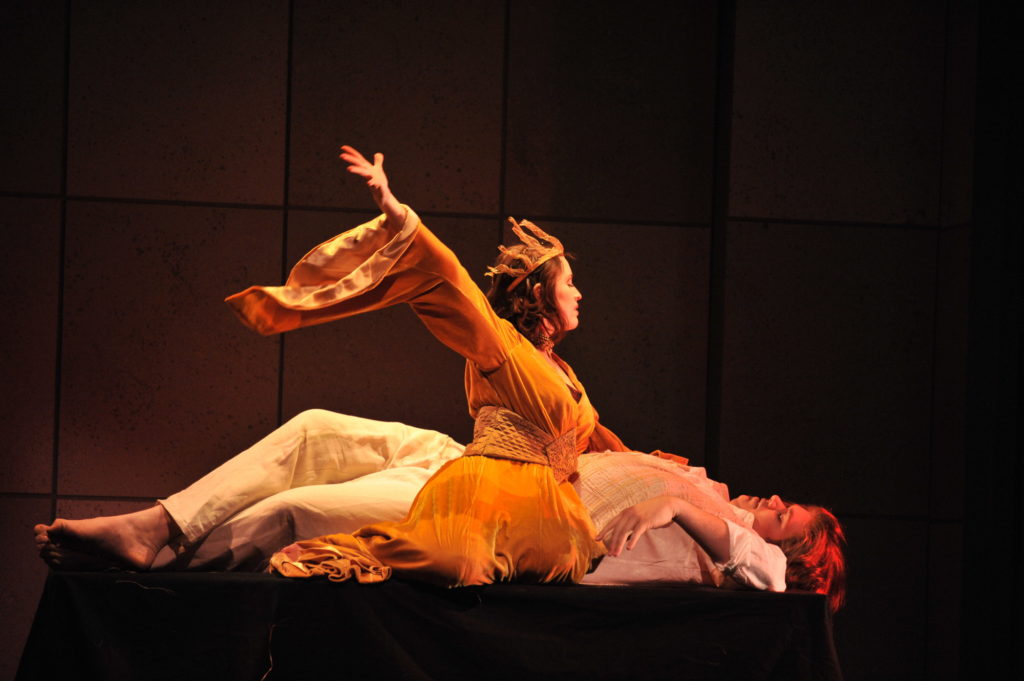 The cultural exchange that enabled Tshepo Moagi to participate in this production was made possible by generous support from the University of Michigan African Studies Center, the office of Senior Vice-Provost Lester Monts, and the SMTD.

Prologue: The Battlefield of Money & Art

The richest man in Vienna has commissioned a gifted young Composer to write a new opera, Ariadne auf Naxos, which will be presented this evening in honor of his newest art acquisition and for the entertainment of his guests. Preparations are under way as the opera singers discover to their consternation that a troupe of local hipster comedians is also scheduled to perform on the same program. How will the two shows possibly work together as one evening’s entertainment? Everyone’s confusion increases when they receive the news that since fireworks are set to go off at precisely nine o’clock that night, the two performances will have to take place simultaneously in order to save time. At first despairing of ever being able to present the opera as conceived, the Composer is eventually convinced by Zerbinetta, the free-thinking leader of the comedians, as the two of them collide and connect with each other. The Composer falls under her spell and, believing that music will always reign supreme, agrees to the proposed union of the two performances.

As the opera begins, three nymphs – Najade, Dryade, and Echo – sing of the sorrow of Ariadne, who has been abandoned on the island of Naxos by Theseus. He brought her there after she helped him defeat the Minotaur at her father King Minos’s palace on Crete. Ariadne mourns her fate. Zerbinetta and her colleagues, notably Harlequin, try in vain to cheer Ariadne. Ariadne has loved one man and one man alone, now that he has abandoned her, she can hope only for death. Zerbinetta urges her to forget the ex and find another lover. She sings at length about her own experiences with men – she loves each one passionately then another always shows up, each seeming like a god at first blush. Ariadne remains steadfastly miserable until the nymphs announce the arrival of the youthful god Bacchus, wounded from his experience with the sorceress Circe. Both mistake the identity of the other – Bacchus believes Ariadne to be another enchantress while Ariadne persists in believing that he is the messenger of death, come to free her. He agrees that he will transform her, but through love, not death. In their final duet, both express wonder at the change occurring within them. Bacchus is amazed as he becomes the god he was destined to become and the lovers find themselves and their reality transformed. Zerbinetta points out that “a new god” has indeed come, just as she predicted. A wondrous transformation has occurred through the power of music.

← August: Osage County Crazy for You →