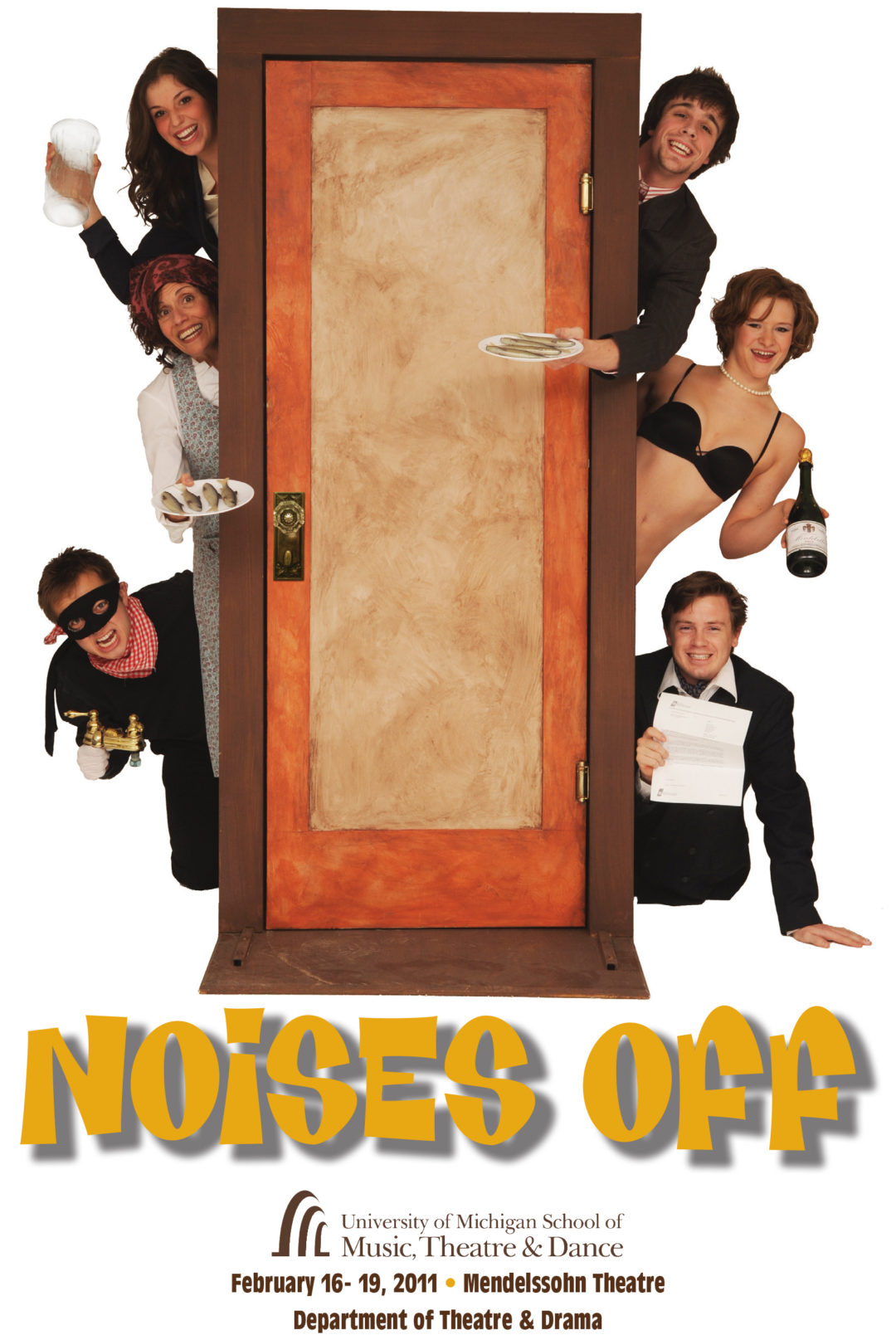 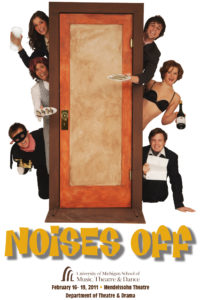 a comedy by Michael Frayn

The Story: In a provincial English town, a theatre troupe rehearses a touring production of a sex comedy, Nothing On. Unfortunately, almost nothing is going right – the cast can’t remember their lines, they mix up their blocking, misplace props, and they’ve lost sight of why they’re acting! Even the director is certain that the show will be a disaster. Somehow the cast pulls through, but by mid-tour the drama has moved backstage, as cast and crews’ personal lives start to mirror the insanity in the play, with sexual dalliances, jealousies, and chaos reigning overall. By closing night, the play is in complete shambles both onstage and off, with open “warfare” occurring among cast members and everyone simply trying to survive until the final curtain.

Background:  Masterfully constructed, Noises Off is the “most dexterously realized comedy ever about putting on a comedy” (NY Times). Playwright and novelist Michael Frayn (Democracy, Copenhagen) devised the concept for Noises Off while watching another one of his plays from backstage. “It was funnier from behind than in front and I thought that one day I must write a farce from behind.” With an ingenious structure that showcased the action both onstage and off, Noises Off premiered in London in 1982, garnering immediate acclaim. NY Times critic Frank Rich, who saw the premiere as well as the Broadway production in 1983, proclaimed the work “The funniest play written in my lifetime.” Join us for an evening of rollicking hilarity and virtuosic timing.

Noises Off is presented through generous support from the Office of the Vice President for Research, the School of Music, Theatre & Dance, and the Department of Theatre & Drama.

[accordion title=”Dedicated to the memory of Professor Glenda Dickerson”] 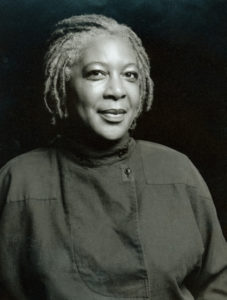 Glenda Dickerson (1945-2012), director, writer, folklorist, educator and actor, is one of those people who refuses to die. Her body rests in peace but her soul lives on in the art she created, in the students she has inspired over the years and in her writings that continue to enlighten us. Her book, African American Theater: A Cultural Companion, is, she wrote, a combination of history, fiction, drama and myth. In that book she invites us to learn how to fly, how to continually strive to unchain the long suppressed innerselves that were burdened with 256 years of slavery and 100 years of slavery after slavery in a country that claimed to be Christian, but often fell far short of that noble goal due to the desire for the wealth that slavery generated. To me her book is her way of continuing the Underground Railroad. It’s an encouragement, a challenge to run away from self-denigration, to escape the severity of continuing racial and gender biases that nurture self-doubt and that lead to political unrest and social decay. She resuscitates the cultural stories that recall, inform and revive the internal African souls that yet linger in the deepest recesses of the African-American psyche. Instead of dismembering African-American cultural history, she “re-members” that history, gives it wings to soar beyond the centuries old racially inspired stereotypes, to fly free at last, free at last, thank God almighty, free at last. Thank you, Glenda. Amen.

It is only hours before the opening of a British adult farce, Nothing On, and the touring company is hurriedly running through a final dress rehearsal in the Grand Theatre, Weston-super-Mare, before the first audience arrives.

ACT I (Grand Theatre, Weston-super-Mare, Monday, January 14th)
During the first act, we are an audience to this production of a play within a play. The Nothing On cast is lovable, but mainly inept; however, we cheer for them under our breath and hope that they can pull it together and get the show on the road. Trying to pull this all together into some semblance of a presentable show is the director, Lloyd Dallas, who is sitting in the darkened auditorium shouting out directions and trying to get everybody ready for opening.

ACT II (Theatre Royal, Aston-under-Lyne, Wednesday matinee, February 13th)
For this act, we, the audience, are sitting backstage; the entire set has been turned 180 degrees. We can hear the actors performing out front, but what we see is the back side of the scenic flats, the stage manager trying to keep the action flowing and everybody happy, and the various antics of the actors offstage between their exits and entrances. The play has been on the road for one month now, and relationships between cast members, as well as the quality of Nothing On, have deteriorated. Most of the company is in a continual state of agitation, and this disorder is carrying over into the play, causing missed entrances, flubbed lines, and general hilarity. Act 3 is even more frenetic.

ACT III (Municipal Theatre, Stockton-on-Tees, Saturday, April 6th)
It is seven weeks later, and the tour is reaching an end. We, the audience, are out front again, watching a performance of Nothing On that has reached the point of complete and hilarious deterioration. The business of performing the show has become subordinate to the business of solving personal problems. Ultimately, however, they carry off the show – in some semblance.

— Synopsis courtesy of and excerpted from the Utah Shakespeare Festival

IF IT’S TUESDAY IT MUST BE SCUNTHORPE!
After having been involved as an actor and director with numerous productions of Noises Off, I can quite safely say it is one of the most complex and difficult shows to perform or direct. However, the reward for all the arduous work, pitch perfect timing and the flawless precision required to make the show appear effortless is the audience’s reaction, frequently continuous and uproarious laughter. Even though I have sworn more than once never to be involved with this grueling show again, there is more than one reason I would plunge right in “one more time.” Apart from being a joy to perform or direct, Noises Off was where I first met my wonderful, brilliant, and beautiful wife, Pamela. When we returned to the Olney Theatre in Maryland for a tenth-anniversary revival of the show, I proposed to her on stage, during the curtain call, in front of four hundred patrons. I’m immensely pleased she didn’t say no.