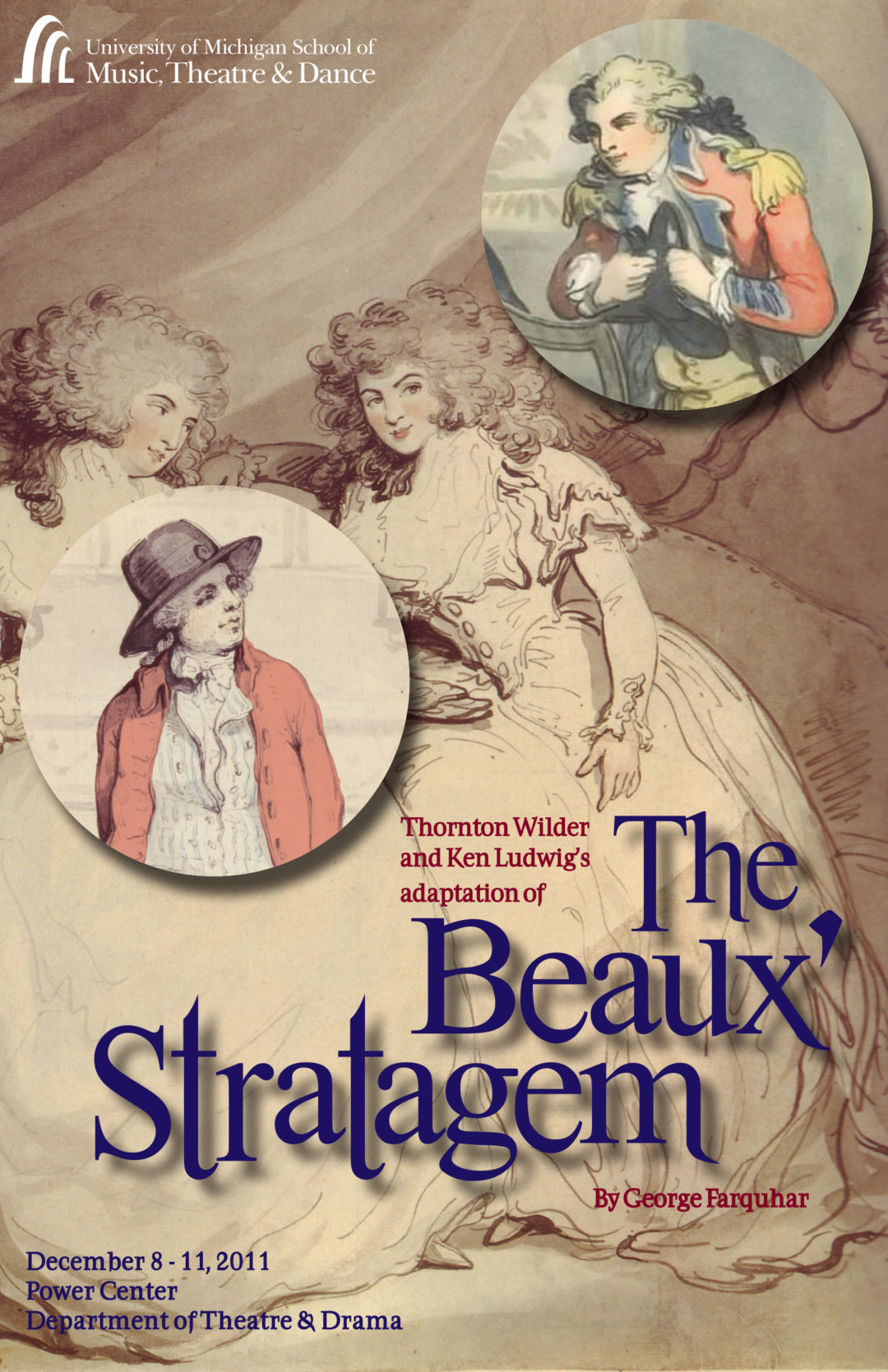 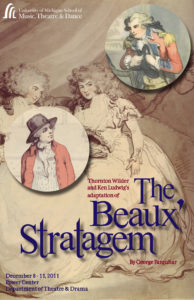 The Story: Having blown their fortunes, two young minor aristocrats (the “Beaux”), Archer & Aimwell, set off to the countryside to try to marry into wealth in order to continue their lives of pleasure. In the town of Lichfield they find their targets – the daughter of a wealthy widower and her unhappily married sister-in-law. Posing as master and servant, the two men quickly find that their carefully planned caper runs afoul due to an unexpected twist – true love. When an innkeeper’s daughter takes a fancy to Archer and the local “parson” tries to recruit them into his neighborhood highwayman gang, their plans quickly go awry. The play is filled with bawdy humor, spirited dialogue, hilarious characters, and romantic charm; our unlikely heroes get exactly what they wanted, if not what they bargained for.

Background: Irish playwright George Farquhar (The Recruiting Officer, the play performed in Our Country’s Good) wrote The Beaux’ Stratagem while on his deathbed in 1707. An instant success, the play was performed frequently, with constant revivals. In 1939, Thornton Wilder, fresh from his success with Our Town, received a request from famed producer Cheryl Crawford for a new look at Beaux’. Wilder worked on the adaptation for nine months before declaring himself “stuck” and abandoning the project. In 2004, Wilder’s nephew rediscovered the forgotten manuscript and asked Ken Ludwig (Crazy for You, Lend me a Tenor) to complete the project. The new Beaux’ debuted in 2006 at the Shakespeare Theatre in Washington D.C. and was declared by Variety to be a “laudable remake of a historically significant play.” Created by three theatrical voices centuries apart, The Beaux’ Stratagem melds classic and modern sensibilities in a seamless whole that continues to delight.

This celebrated late Restoration comedy, with its timelessly wicked and witty observations about society and differences between the sexes, was one of England’s most popular and performed comedies for more than 200 years. First produced in 1707, The Beaux’, as it is known familiarly, is still produced occasionally in England. But in this country, while routinely included in anthologies of Restoration drama, The Beaux’ is rarely seen on stage outside a university setting. In the fall of 1939, with the goal of making it more accessible to a modern audience, Thornton Wilder began, but never completed, an adaptation of The Beaux’ Stratagem. In 2004, Ken Ludwig accepted the invitation offered by the Wilder estate to finish the work. The completed play, sixty-seven years in the making, was produced with great success in 2006 by the Shakespeare Theatre Company in Washington, D.C.

Once upon a time, I was reading Thornton’s manuscripts in Yale’s Beinecke Rare Book and Manuscript Library, where it’s so quiet you’re afraid to even breathe, when I came across the script of his unfinished adaptation of The Beaux’ Stratagem. It’s always been there, but nobody seems to have paid any attention to it. I started laughing so hard as I read it that a starchy scholar working on Medieval illuminated manuscripts at a nearby table gave me a public dressing down. Welcome, ladies and gentlemen, to The Beaux’ Stratagem.

Thornton Wilder entered the decade of the ‘30s, which was his 30s, determined to achieve Broadway standing. He had all sorts of resources to help make this happen. He was, for example, a world-famous novelist by this time, which meant that many a door was open to him. But he had also been writing drama from boyhood on and publishing plays from college on. And destroying them, too. By nature, Wilder wasn’t a “keeper.” Starting young, he threw away tons of material.

He was prodigiously well-read, knew his French, German, Italian and Spanish, and thus seemed to know the language and literature of drama from everywhere in the original. So it is no surprise that he first got to Broadway by way of translation and adaptation. It is no surprise that his first Broadway success was another adaptation/translation—a new “stage version” of A Doll’s House for Jed Harris and Ruth Gordon. The production set the record for the longest running Doll’s House on Broadway – 144 performances – which stood until 1997.

We now come to Our Town, which opens February 4, 1938; that play has never closed. Wilder closes out 1938 with an adaptation from a Johann Nestroy comedy he calls The Merchant of Yonkers. It died a quick death, but everyone who mattered knew it would be a success – someday. In 1952 Ruth Gordon picked it up again and two years later turned it into The Matchmaker. The rest is happy history.

At the end of the ‘30s, Wilder is exhausted. He gets to mid-1939, and he says, “I’m going to enjoy people this fall. I’m going to do little tasks. I’m not going to write my own plays.” Then, out of left field, he gets slammed by Sol Lesser, the producer trying to make a film out of Our Town. Wilder had not counted on this diversion. His free time is shrinking away to work on a task promised to theatre producer Cheryl Crawford; an adaptation of The Beaux’ Stratagem. He starts work on it in September, just as war is declared in Europe. By early December, he realizes that he has lost his way with The Beaux’ Stratagem and must give it up. Given Wilder’s propensity for destroying paper, it speaks well for his view of the fragment’s merits that he did not, thank heavens, destroy it.

I carried The Beaux’ Stratagem around in my head for several years, thinking what fun it would be to finish it. We could laugh and see still another example of the trenchant social stuff wrapped up in a great big ball of wild and crazy entertainment that my uncle liked to write about. In the context of the “realism” of much of the America stage before World War II, he stood out when he called for (as he put in ‘40) “the great theatre of enchantment and ecstasy.”

Thornton Wilder’s work on The Beaux’ Stratagem is extraordinary in many ways, but particularly because it does something that few, if any, other playwrights have ever done before. Normally, when a dramatist chooses an underlying work to adapt, the underlying work is in a different language; or it is in another medium altogether, be it a novel, a poem or, lately, a movie. What Thornton did was take a play in English and create an adaptation into another play in English, set in the same time period with almost all of the same characters. And the work he chose to adapt was already a minor classic.

Thornton must have said to himself: “Here is a great piece of theatre with remarkable comic exuberance, gloriously funny characters and an abundance of genuinely witty dialogue; and it sits on the shelf, unperformed for decades at a time, because it is too long, contains many turgid, unedited passages, and features two minor characters who are given far too much stage time and whose 18th-century stereotypes leave us cold today. So why don’t I pick this piece up and shake it a bit? I’ll keep the exuberant storyline, the major characters and the great speeches, and I’ll cut out all the boring bits. And to make up for the cuts, I’ll add some new plot twists and write some new scenes. Then, perhaps, I can restore this play to the glory it deserves as a true classic of the 18th century, ready to stand beside its only peers: She Stoops to Conquer, The Rivals and The School for Scandal.”

This play has been called a delightful romp: sheer laugh-out-loud fun, with witty dialogue and characters that engage the audience’s sympathy while disarming them at the same time… in short – a perfect holiday offering for a cold winter’s night in Ann Arbor, in the Power Center. We have had great fun and games during the rehearsal process, and I am thrilled to have this superb cast of actors with which to play. Each one has shown me a delicious sense of humor and a natural affinity for the text. Vince Mountain has given us a playful, charming world in which to stage our shenanigans. Jessica Hahn’s period choice of the 1780s for costumes provides us with relaxed, romantic silhouettes. As if this were not enough, we have original music, written by Colin Fulton, for oboe, bassoon, and harpsichord – to set the stage, provide transitions from scene to scene, underscore our fights, and send us dancing off the stage at the end of the evening. We hope you enjoy this new take on a classic tale.