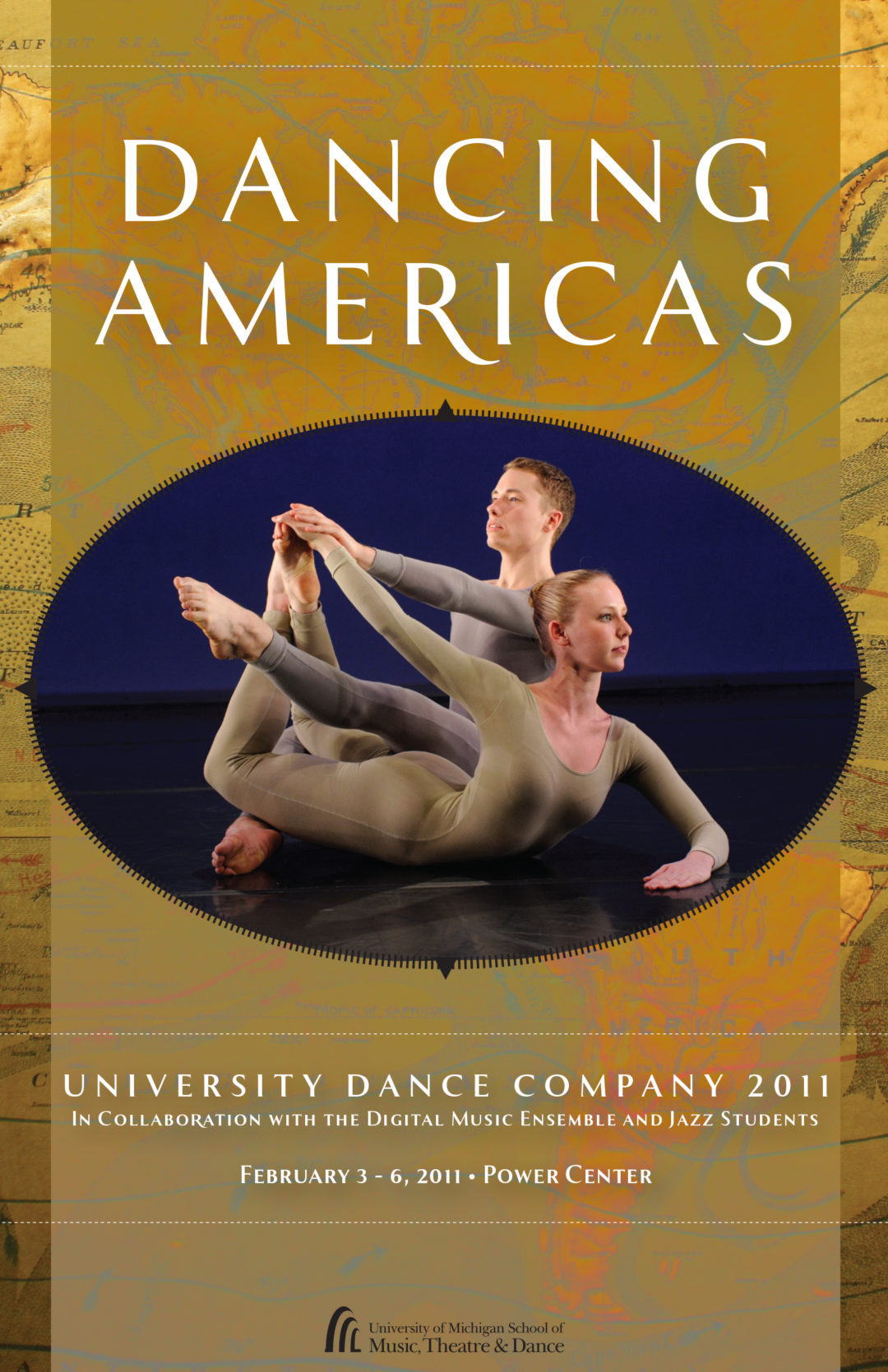 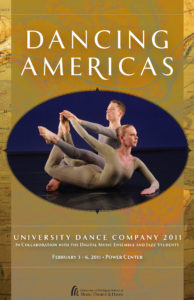 Premiere choreography by guest Dianne McIntyre and faculty Missy Beck and Sandra Torijano, and a MinEvent by Merce Cunningham

The University Dance Company’s 2011 concert celebrates the intertwining of music and culture throughout the Americas. Acclaimed dance artist Dianne McIntyre creates a new work set to music inspired by Bo Diddley, Eric Dolphy, and Dizzy Gillespie played by students in the UM Jazz Department. McIntyre’s extensive career has stretched from performing to choreographing for modern dance, theatre, television, and film, as well as winning numerous awards, including the 2009 American Dance Festival Award for Distinguished Teaching. “One of the most engaging [dancers] you’ll see anywhere…McIntyre whips together narrative, exceptionally fluid dancing, and music.” (Sarah Kaufman, The Washington Post) Sandra Torijano premieres Tango con la vida, a work examining the deep, shared spirit underlying Latin America’s rich dance and music cultures. Towards a sudden silence by Missy Beck is inspired by the poems of American poet, UM graduate, and Hopwood Award winner Marge Piercy. Rounding out the evening will be a MinEvent, presenting an uninterrupted sequence of excerpts from masterworks by Merce Cunningham, accompanied by John Cage’s “Cartridge Music” played live by the Digital Music Ensemble. 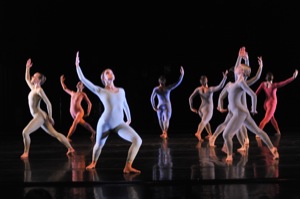 Note: A leader of the American avant-garde throughout his seventy-year career, Merce Cunningham (1919-2009) is considered to be one of the most important choreographers of our time. Through much of his life, he was also one of the greatest American dancers. With an artistic career distinguished by constant innovation, Cunningham expanded the frontiers not only of dance, but also of contemporary visual and performing arts. His collaborations with artistic innovators from every creative discipline yielded an unparalleled body of American dance, music, and visual art.

Of all his collaborations, Cunningham’s work with John Cage, his life partner from the 1940s until Cage’s death in 1992, had the greatest influence on his practice. Together, Cunningham and Cage proposed a number of radical innovations. The most famous and controversial of these concerned the relationship between dance and music, which they concluded may occur in the same time and space, but should be created independently of one another. The two also made extensive use of chance procedures, abandoning not only musical forms, but narrative and other conventional elements of dance composition – such as cause and effect, and climax and anticlimax. For Cunningham, the subject of his dances was always dance itself.

A MinEvent is an uninterrupted sequence of excerpts drawn from the work of Merce Cunningham. Constructed and staged by Jean Freebury (MCDC 1992-2003) expressly for U-M, the material for this MinEvent was drawn from the following dances: Scramble (1967), Inlets 2 (1983), Ground Level Overlay (1995), and Pond Way (1998). 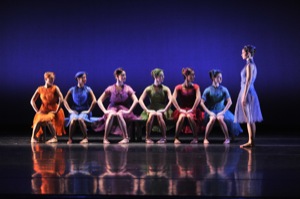 Music: “In a Lonely Place,” “Only the Lonely” by Roy Orbison and Joe Melson, “In a Silent Way” by Joe Zawinul, “Goodbye” by Stephen F. Earle

I. My worst enemy is encoded in my body
II. Old punishments still smoulder like a tire dump
III. Of the patience called forth by transition
IV. Core memory 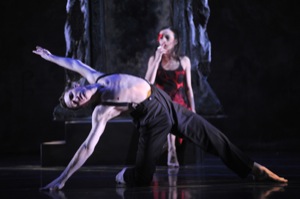 Choreographer’s Note: The last piece that I created for Power Center in 2010, La Luna Nueva, was a mystical, spiritual, and transcendent choreography to embrace faith and hope, to blossom and to be alive after confronting a diagnosis of leukemia. After finishing two years of chemotherapy, now is the time to “dance with the life” – to revive the passion of living, the blessing to be present, the joy of the music, to move and dance. Tango con la vida is a celebration of life. 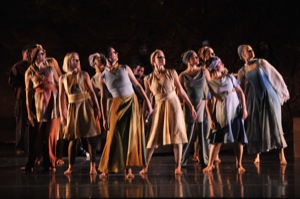 The music for The Summit was inspired by “Spanish Guitar” by Ellas McDaniel (Bo Diddley), “You Don’t Know What Love Is” by Gene de Paul, arranged by Eric Dolphy, and “Kush” by John Birks “Dizzy” Gillespie.

I. A gathering of nations
II. A sacred blending
III. An ancient divide

Choreographer’s note: Inspiration for the dance comes from Dizzy Gillespie’s composition “Kush” in which he recalls that ancient African civilization also known as Nubia.

A century ago, modern dance pioneer Isadora Duncan proclaimed, “I see America dancing … from the Pacific, over the Plains, over the Sierra Nevadas, over the Rocky Mountains to the Atlantic.” As our 2011 concert title suggests, we envision many Americas dancing – to tango rhythms from Argentina; danzóns from Central America; jazz inspired by music of the southern United States and New York City; 1960s pop songs; and, in-keeping with Merce Cunningham’s dance aesthetic, choreography co-existing in the same temporal and spatial moment as its accompaniment but independent from it. Dancing Americas celebrates a multiplicity of styles across time, continents and cultures. Our students have embodied them with gusto, embraced the concept of artistic collaboration enthusiastically, and thrived through the experience. Tonight’s program is a testament to dance-music legacies being preserved through live performance and a prism through which to enjoy the rich array of talent and expertise within the School of Music, Theatre & Dance. Go dancers, musicians, and production team!

The University Dance Company’s 2011 concert, Dancing Americas, celebrates the diversity of talent, dance, music, culture, and creativity across the decades and throughout North, Central, and South America.

Our acclaimed guest artist Dianne McIntyre premieres The Summit, a new work created in collaboration with dancers from the Department of Dance, musicians from the Department of Jazz, and Professor Stephen Rush. In her tradition of creating dance set to live music and her philosophy that dance is music moving, Dianne’s work honors the music of blues/rock and roll “originator” Bo Diddley, bebop master Dizzy Gillespie, and free jazz innovator Eric Dolphy, all major contributors to American and world music. Inspired by Gillespie’s “Kush,” McIntyre takes the music of all three artists and theatricalizes it with and through the skill and focus of the dancers and the dynamics of the costumes, sets and lighting. Associate Professor Robin Wilson, who worked with McIntyre in New York City during the late 1970s and early 1980s, is also a collaborator for this work.

Missy Beck creates Towards a sudden silence, based on poems by Marge Piercy – American poet, UM grad, and Hopwood Award-winner. Set in the late 1950s and early 1960s, the costumes and the movement connote both constraint and the struggle to break the societal restrictions of the era. Missy’s choreographic vocabulary is resonant with emotional gestures and their role in the “core memory” of an individual and a community.

The evening opens with a MinEvent by master American choreographer Merce Cunningham. A pioneer in the American avant-garde throughout his lengthy career, Cunningham is considered one of the most influential choreographers of our time. In the 1960s, Cunningham created the Event – evening-length performances consisting of fragments from dances in the company’s repertory so intermingled such as to constitute a new work. Often site specific, no two Events are the same. Our shorter MinEvent (a mini Event) has been constructed and staged by Jean Freebury, a dancer in the Merce Cunningham Dance Company from 1992-2003 and now an official re-stager of Cunningham’s works. It is a wonderful lead-in to the University Musical Society’s presentation of the MCDC’s Legacy Tour later this month.

We hope you enjoy this varied program indicative of the diversity of the Americas.

← Much Ado About Nothing Arms and the Man →