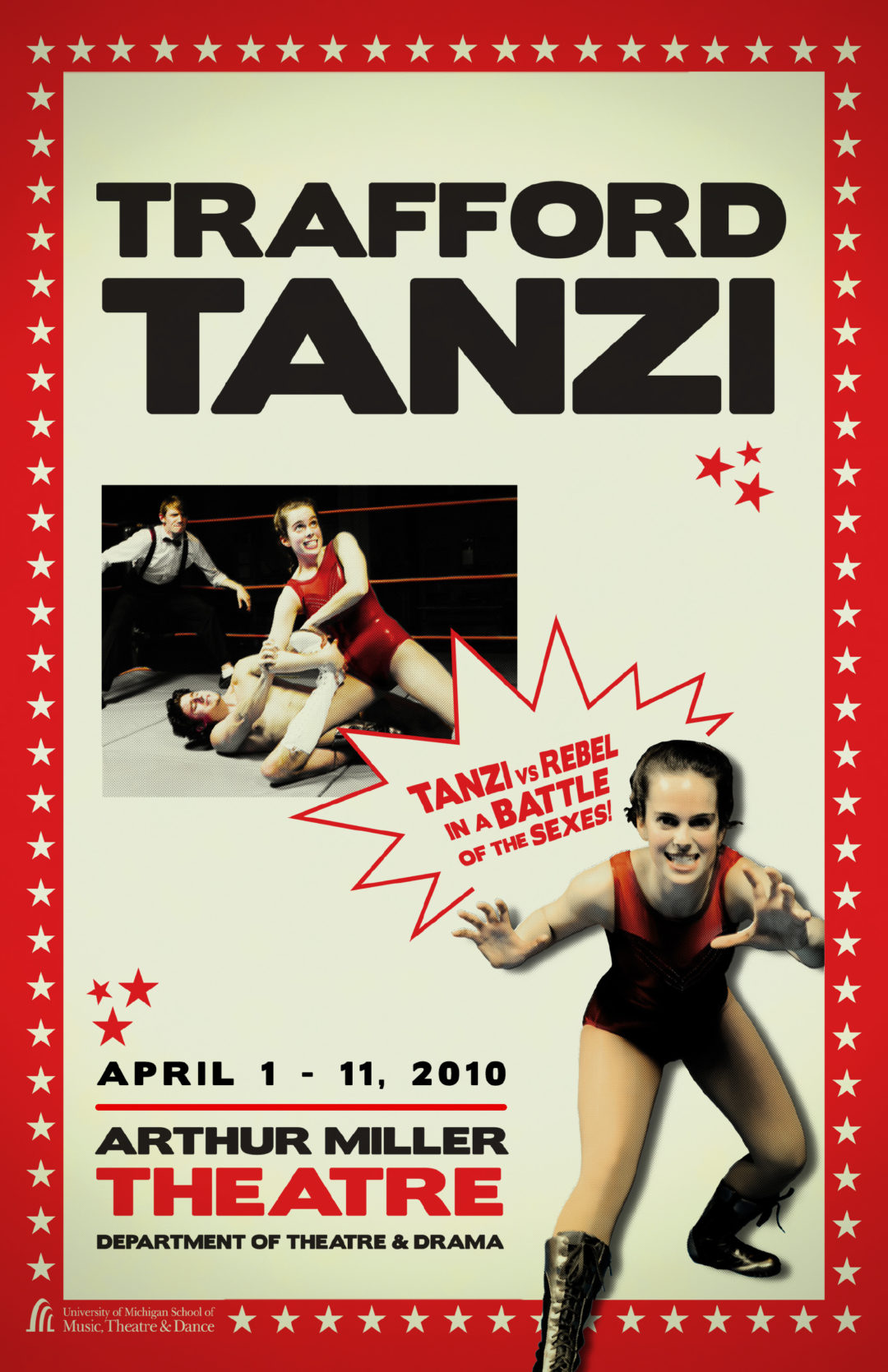 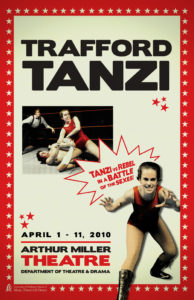 The Story: Set in a WWE style wrestling ring, Trafford Tanzi tells the story of Tanzi, a young woman from a working class English area of Manchester, as she – literally – wrestles her way through life. Tanzi faces her Dad, Mum, best friend, school psychiatrist, and ultimately her husband in round after round for the right to set her own destiny. Will Tanzi beat the odds and win her independence in this winner-take-all bout?

Artistic Significance: English playwright Claire Luckham wrote Trafford Tanzi in 1978 for Liverpool’s Everyman Theater, which was temporarily performing in local pubs while their theatre was under renovation. “[Wrestling] is amazing entertainment,” stated Luckham, “and worked perfectly for a pub show. …To me the really amazing thing about wrestling is the attitude of the audiences. They have come to enjoy themselves, not just to be entertained, but to provide some of the entertainment themselves.” Tanzi ultimately transferred to London’s West End and Toronto’s Free Theatre, garnering critical and audience acclaim as “one of the most delightful theatrical events of the year” (Canada’s The Globe and Mail ). Gather round the ring as Tanzi combines music, comedy, drama, and physical action in what is sure to be the rowdiest event of the season.

In Lancaster, England, in the seventies, I was a teenage actor in the Duke’s Playhouse Youth Theatre. We met every Sunday and played for 3 hours. We rehearsed plays, we did exercises, we devised original material and once in a while were invited to participate in a main stage professional production. I was in the chorus of the Christmas pantomime one year: Aladdin. Aladdin was played, if I remember rightly, by Fiona Victory and a comic duo by Harriet Walter (recently here playing Cleopatra with the RSC) and Noreen Kershaw. After I left for University I lost track of some of the actors from my home town but Noreen popped up again on my radar screen in 1980 when I heard from an old friend of this play being produced in Manchester with wrestling and singing, with the curious title of Trafford Tanzi. Tanzi was to be played by Noreen.

For many years, this has been a play that I have had on my list of must-do productions. I am so happy to be able to do it here with these students. Claire Luckham said, “you don’t have to be an athlete [to do this play] but you do have to be fit and brave.”

The cast of this production has worked all semester to learn how to wrestle, coached by Charles Fairbanks, a graduate filmmaker in the school of Art & Design. Their dedication to training with Charles has been a source of pride and joy. Whatever happens with the production, I believe this experience will have an immeasurable impact upon them as performers.

I am sorry that we are unable to serve pints of lager and bitter (as suggested in the script) to help you enjoy the full experience of Trafford Tanzi, but I think the fruits of the labors of the cast, designers and composer/arranger Carlos Valdes will be enough to satisfy your thirst for theatre.

In the late 1970s, the Everyman Theatre implemented a new policy that would require their acting company to employ an equal amount of men and women. Claire Luckham was commissioned by the theatre to write a new play that would utilize the troupe’s increased female presence. In 1978, she brought them Trafford Tanzi, which uses a wrestling match to metaphorically describe the struggles of its working-class Mancunian heroine. In the 1960s and 70s, women moved outside the home; and fought for their equal rights in the workplace, on the athletic field, and elsewhere. Women in the world of wrestling have had an especially difficult time finding acceptance. While fans admire male wrestlers as performers and their bouts are viewed as a spectacle of physical strength and athletic skill, the women are not treated with such respect. Oftentimes, matches featuring female wrestlers are intended simply to titillate the male audience. The female wrestler’s body is on display for audiences to objectify and ogle while the male wrestler’s body is appreciated for what it can do. Even when female wrestlers are taken seriously they still fail to find themselves in the spotlight. Women may appear in the early rounds of a tournament but prize fights and final matches are almost exclusively the territory of men. In the wrestling ring of Luckham’s play, issues of objectification and marginalization, which working women are forced to deal with regularly, are made especially prominent.

Luckham’s setting also underlines some of the choices working women face. The female wrestler may find that balancing her athletic career and her family life is especially difficult. Wrestling often involves months-long tours abroad. While on the road, a wrestler has a choice between leaving her children at home with relatives and carting them around from venue to venue. A female wrestler who wishes to have a family must either put her career on hold or sacrifice quality time with her children. To compete with the men, and to share in some of their glory, a female wrestler must also sacrifice some of her femininity. To hold power in the wrestling ring, women are often required to be more brutally aggressive than their male counterparts. These issues exist for women working in many fields. The choices faced by a female wrestler like Tanzi parallel the decisions of a young professional who must choose between motherhood and advancement, and who must choose between being likable but walked over, and being respected but viewed as harsh and icy.