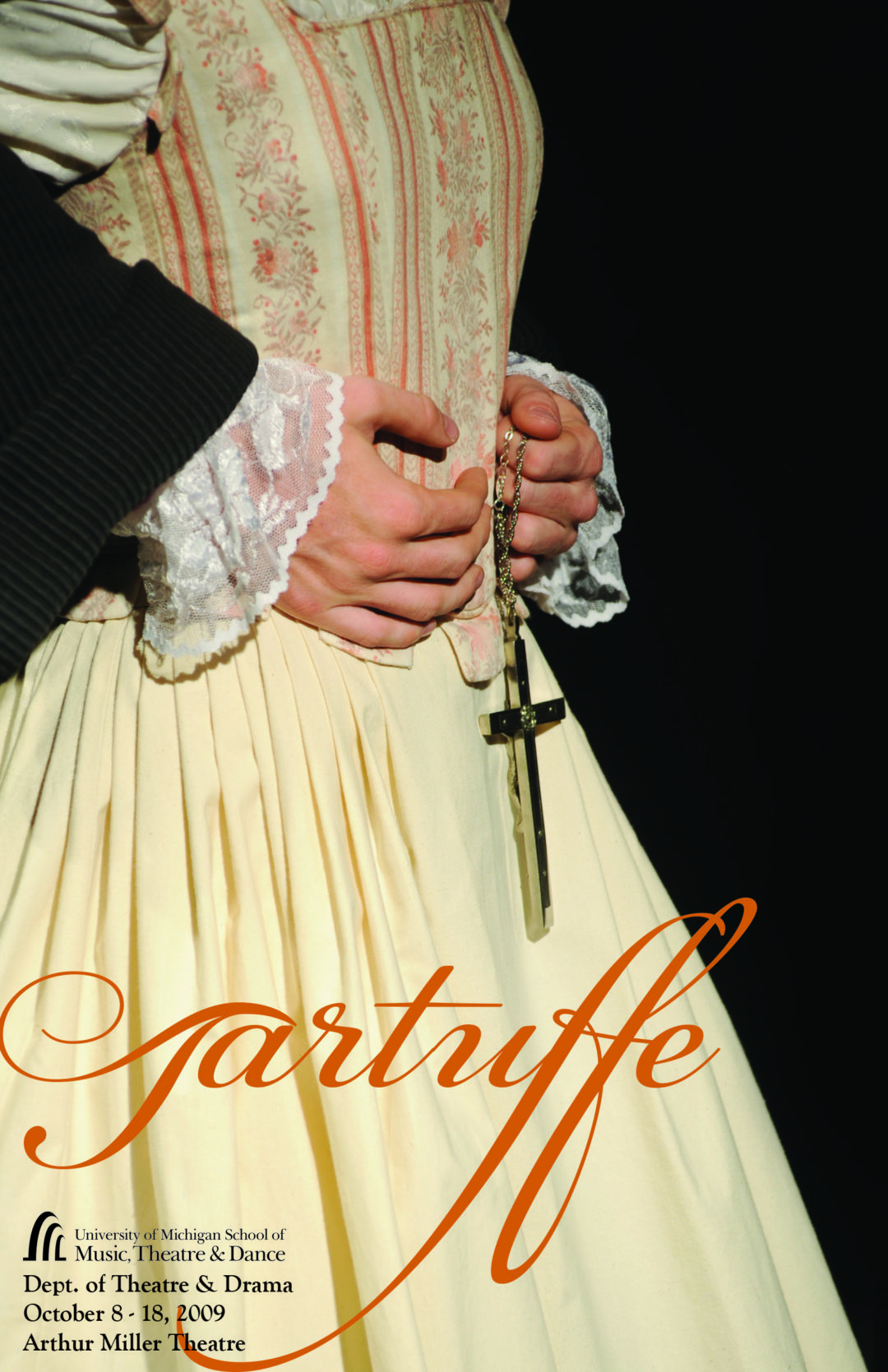 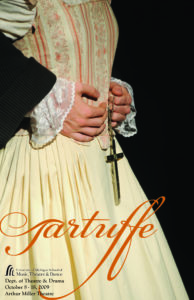 By Molière
Translated by Ranjit Bolt

The Story: Under the religious cloak of piety, Tartuffe befriends Orgon, a rich man who is swept away by Tartuffe’s charisma and his message of the uncomplicated holy life. While his family and friends easily recognize Tartuffe as a con man, the more they protest, the more Orgon stubbornly embraces the charlatan — giving him money, the deed to the house, and even his daughter’s hand in marriage. Exasperated by Orgon’s folly and lack of discernment, his family tries various schemes to expose Tartuffe’s hypocrisy. Will they succeed in ridding the house of the scoundrel or will Tartuffe’s masquerade prevail?

Artistic Significance: English playwright Ranjit Bolt is one of the foremost contemporary translators of Molière’s work, having rendered eight of the French playwright’s works to wide acclaim. His translation of Tartuffe retains Molière’s spirit and rhyming couplets while injecting an immediacy that makes this 346 year-old satire amazingly relevant. The Ashland Daily Times called this version for the Oregon Shakespeare Festival, “sparkling and sprightly.” Priscilla Lindsay, who directed the Department’s enchanting You Never Can Tell in March 2008, returns to direct this delightful romp. Rich with biting wit and spiraling absurdity, Tartuffe pokes outrageous fun at religious hypocrisy and human foibles.

Hypocrisy in anything whatever may deceive the cleverest and most penetrating man, but the least wide-awake of children recognizes it, and is revolted by it, however ingeniously it may be disguised. — Leo Tolstoy

This is a play about parents and their children, husbands and wives, lovers and loners, but ultimately it is about moderation versus extremism. Fanaticism of all kinds is subject to ridicule at the least and damnation at the worst. We expose ourselves to dangerous consequences when we abandon reason for obsession. Straying from the path of moderation jeopardizes hearth and home. Putting our personal and communal wealth in the hands of a zealot, a charismatic rogue, leads to destruction of the delicate balance of households, communities, and the status quo. If we believe these statements, then we should be forewarned and fortified to identify the presence of such a crafty and deceitful presence in our midst. But alas, this is not the case. History has proven that Tartuffes have fooled man and womankind throughout the ages, with false piety and subversive purposes. We see in these charlatans, these manipulators who pass for truth-tellers, a chance to obtain grace and to find answers to unanswerable questions. We want to believe.

It’s a scary scenario, played over and over in our religious, political, and social arenas. Tartuffe is the quintessential embodiment of opportunism gone bad. He never really lies, he admits his crimes, and he waits for us to punish him, knowing full well that we will be taken in by his “honesty” and accept his confessions as proof of innocence.

Plays can end with the welcome intervention of kings, gods, or the cavalry, but life is not like that very often. This is, of course, Molière’s point. We could do worse than to learn from his own infectious combination of horror and delight at the endless variety of human duplicity, and from his courage in facing it without a trace of self-pity. — David Copelin, Dramaturg, Oregon Shakespeare Festival

Thank goodness Molière gives us our medicine with a smile, a chuckle, and a belly laugh.

Currently the Associate Artistic Director of the Indiana Repertory Theatre, guest director Priscilla Lindsay is no stranger to Ann Arbor. A graduate of the Theatre Department, she and her husband Richard are also the proud parents of 2009 theatre graduate, Maggie Ferguson-Wagstaffe, whom Lindsay had the honor of directing in the Department’s production of You Never Can Tell in March 2008. Backstage caught up with Priscilla to ask about her return to guest direct the Department of Theatre & Drama’s October production of Tartuffe.

This will be your second show as a guest director with the Department. What excites you most about working with the students?
I had such a lovely time directing You Never Can Tell in 2008 – for so many reasons – not the least of which was that I was back in Ann Arbor! After graduating in 1971 and finishing up an MA in Theatre through a Professional Theatre Program Fellowship in 1972, I took off for life in regional theatre. It has been an amazing ride, culminating with my Associate Artistic Directorship at the Indiana Repertory Theatre for the last ten years. My relationships with fellow UM students, professors, and Ann Arbor friends have stayed strong, true and meaningful. I count many of my UM friends as valued colleagues. I consider the quality of my education to be the reason for success in my field. And I can say now, from first-hand experience, that today’s graduates from UM’s theatre, music, and dance departments are even better equipped to meet the professional world with confidence and expertise. Go Blue!

Why did you choose this play for the Department?
I chose Moliere’s Tartuffe because it is a comic masterpiece that allows the actors to play with heightened language, wonderful plot twists, and exacting characterizations. Our production uses a translation by Englishman Ranjit Bolt, who worked with director Peter Amster and Oregon Shakespeare Festival’s dramaturg, David Copelin in 2007, to change some British words and expressions to American ones while retaining the rhymed couplets. Some of the choices are definitely in the modern American vernacular with some vulgarities, but they make the verse very user-friendly and provide our young actors with a “window” into the text. Our job will be to maneuver through the plot points in fluid fashion, seldom if ever standing around, and never without a provocative thing to say: in the dining table seduction scene, Orgon’s wife, in extremis, tries to ward off the randy holy man, saying in the middle of the action, “And now you’re rushing to the sweet before we’ve had the soup and meat!” The result, we hope, will be witty, charming, naughty and accessible.

Rather than update the play, I chose to keep it in the 17th century French world, giving the actors a chance to learn the style of the period while at the same time exploring the old adage, “The more things change, the more they stay the same.”

What is your fondest memory from your time as a UM theatre student?
I’ve been asked to offer up a memorable experience during my time at UM….and of course this has proven difficult. Should I talk about the joy of sailing out over the heads of the Power Center audience in a swing, wearing a Wateau gown and singing “When daisies pied” in Loves Labours’ Lost? Or cooking a seven-course dinner with my theatre pals to host a thank-you celebration for our professors at the end of the semester? Or, as a freshman, staring up at Dr. Claribel Baird as she instructed me on how I might play Miranda in The Tempest, and knowing in my heart that I would never touch her brilliance? Or maybe the time the time Dr. Richard Burgwin played the overture from Les Troyens for us, and knew immediately what the size and scale of my Cleopatra needed to be.

Name your favorite scene or bit of dialogue from Tartuffe?
One of my favorite moments in Tartuffe has to be the entrance of the title character! The audience has heard about the rascal, pro and con, for two solid acts (in our case, scenes) and they are on pins and needles to finally meet him face to face. At first, we are teased by hearing only his voice “My hair shirt may need wringing out, also my scourge, Laurent. No doubt, when that is done, you’ll wish to pray. If anybody wants me, say I’m at the prison.” Every production of Tartuffe has the delicious opportunity to make this entrance memorable. When you see ours, see if you agree!