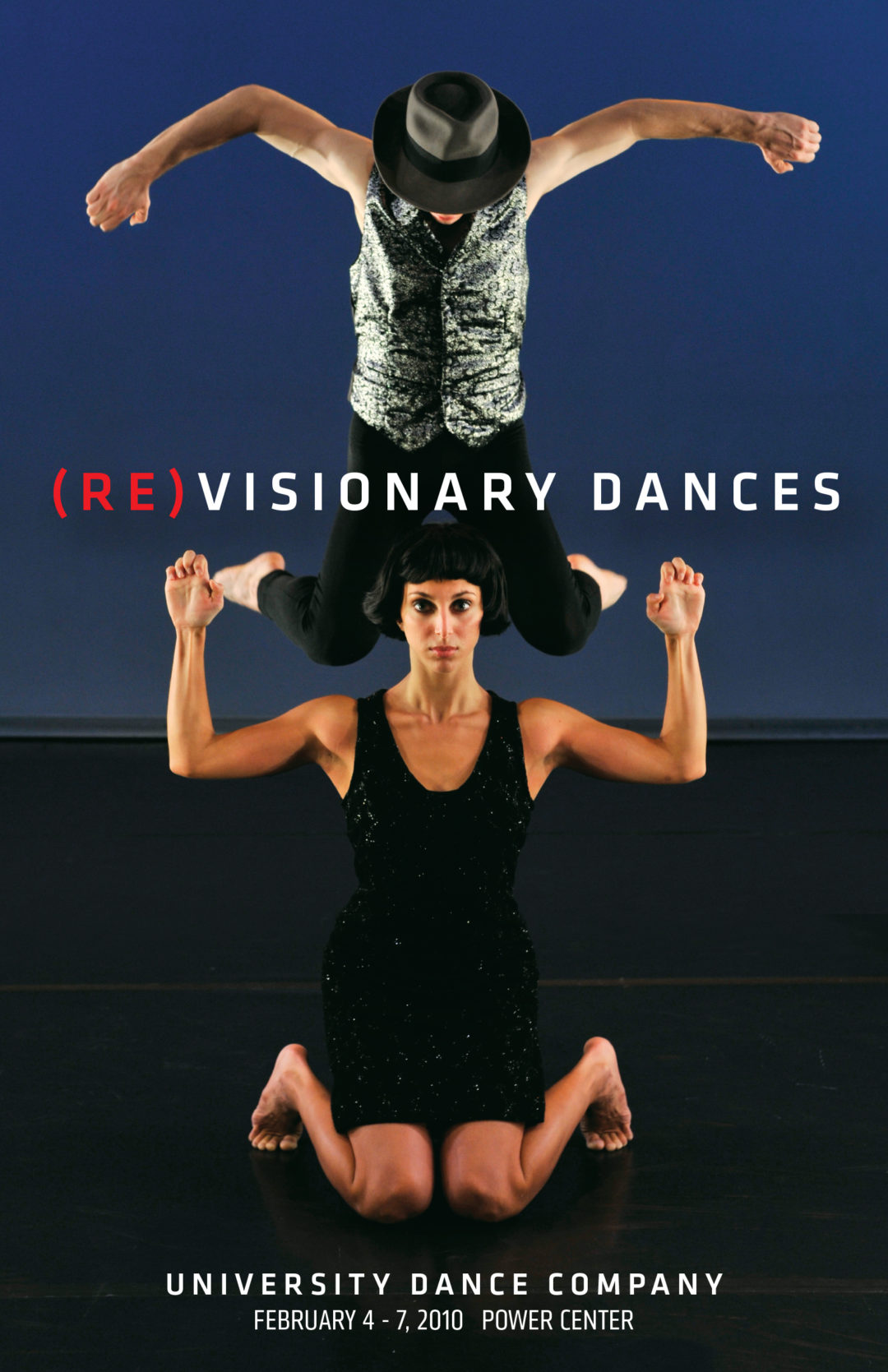 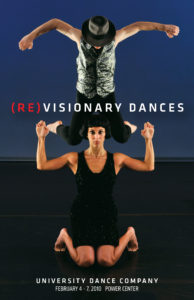 With (Re)Visionary Dances, the University Dance Company celebrates its protean capacity both to consistently generate new visions for the stage and re-envision landmark moments from its extraordinarily rich legacy.

Le Sacre du Printemps (The Rehearsal) by Paul Taylor highlights the concert. This 30th anniversary staging of Taylor’s irreverent and brilliant work is in celebration of the foremost American modern choreographer’s 80th birthday. A delicious double-narrative, the dance tells a Runyonesque detective story juxtaposed against the daily rituals and intrigues of a touring dance company. Premiered in 1980, Taylor’s Le Sacre is set to Stravinsky’s eminent piano score of the same name, in the original version for four hands to be played live. According to the San Francisco Examiner, “Paul Taylor is without question the greatest living American choreographer. Taylor’s emphasis on emotion within actual movement, the rhythmic vitality of his accents, his all-American youthfulness and optimism, all have set standards for American dance.”

Faculty member Amy Chavasse creates Hunger for the Longing for the Craving for the Aching. Using four very different versions of Woody Guthrie’s 1940 seminal folk song, “This Land is Your Land,” Chavasse has collaborated with her cast to construct a Busby Berkeley-like pastiche in homage to things that are true and right and ours. Out of Thin Air – Lightness by Jessica Fogel is inspired by recent discoveries about the deep quantum world of particle physics. The dance is set to a layered digital sound collage of text and music. Sandra Torijano’s La Luna Nueva envisions the overcoming of adversity as a process of personal transformation supported by friendship and love, embodied in a radiantly choreographed epiphany. 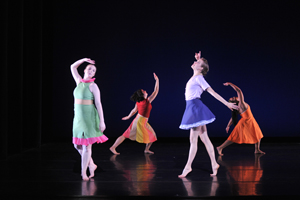 Choreography by Amy Chavasse in collaboration with the dancers

Choreographer’s Note: As “God Bless America,” with its themes of overt patriotism, saturated the public conscience in the 1930s and 40s, Guthrie created “This Land is Your Land” to counter what he viewed as misleading representations of nationalism and common good. We explored the various ways seduction plays out in our culture; whether through ideological persuasion, a bending of wills towards a biased point of view, or in the good old-fashioned physical sense. We found fertile ground to examine these ideas through movement and song. There are so many ways to be led astray. 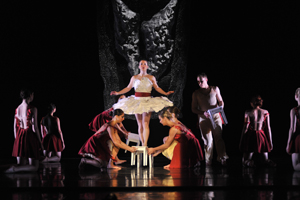 …I am one who will leave my fingerprints
on the water.
If I go against the wind
I’ll be followed by birds’ tracks.
Maybe this summer sun
that dries my eyes
will have mercy upon me.
Silence is a tool
to put back together all the pieces
a temple’s door
always open
to talk with God
Blood knows it is
the soul’s mate
forgetfulness redeems it
I want clearness
I want to shelter
in rain bottles
gardens and utopias.
I want bells songs
to dissolve in them
the salt of my wounds.
I use the white chalk of time
to draw the outline of the soul
as well as an ant’s shadow.
I spend it unmercifully
Because they are stealing everything
I do collect blue fish
and hide a piece of sunshine
in a small wooden box
Despite the scars
of a woman that I carry on my body
I have a torch of fire.
By persisting
I have become the dawn.
— Nidia Marina Gonzalez 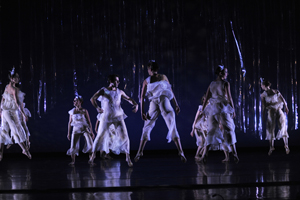 “[K]nowledge of the world tends to dissolve the solidity of the world, leading to all that is minute, light, and mobile.”
— “Lightness,” from Six Memos for the Next Millennium by Italo Calvino 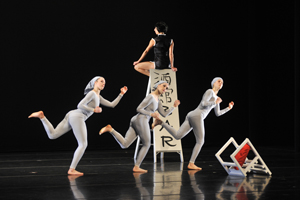 Music by Igor Stravinsky, in the composer’s original arrangement for Piano Four-Hands

Notes: Paul Taylor’s Le Sacre du Printemps (The Rehearsal) is a radical interpretation of the Nijinsky-Stravinsky production which scandalized Paris in 1913. Taylor transports the original scenario of a pagan Russian sacrifice to 20th century America – and specifically to the on stage/off stage activities of a dance company. The action moves back and forth between a rehearsal studio and a series of Chinatown locations in which a Runyonesque detective story about a jewel heist and a kidnapped baby unfolds.

Taylor’s Sacre is ingenious in its telling of a double narrative, with almost all of the dancers assuming double-roles, and in its command of Stravinsky’s complex music. In movement style and design, the dance is taut and two-dimensional and, like all of Taylor’s choreography, it capitalizes on the phenomenal physical and performance abilities of his dancers.

The re-staging of Paul Taylor’s Le Sacre du Printemps (The Rehearsal) is made possible by a grant from the National Endowment for the Arts.

Welcome to our annual Power Center concert, the second highpoint in a year-long series of anniversaries for the Department of Dance. Last summer, the University of Michigan celebrated a century of credit-bearing dance courses on its campus and this academic year, we pay tribute to four faculty members – Mary Cole, Bill DeYoung, Jessica Fogel and Peter Sparling – each of whom has devoted a quarter-century of service to the Department. In June 2010, Ann Arbor Dance Works, UM’s resident professional company comprising faculty and alumni choreographers and students presents its 25th anniversary season.

(Re)Visionary Dances features an ambitious re-staging of Paul Taylor’s Le Sacre du Printemps (The Rehearsal). Part-funded by the NEA and with supporting events made possible through our Friends of Dance, Le Sacre launches multiple projects through 2010 by UM and the Paul Taylor Dance Company marking the choreographer’s 80th birthday. A student production of Le Sacre has long been on my Taylor wish-list and it has been made possible through the wealth of dancer talent, musicianship, faculty expertise and exceptional technical support here at UM. The project could not have been realized without our re-stager, Ruth Andrien – a favorite Taylor muse, insightful and inspiring teacher, and wonderful colleague. Taylor alludes to more than one ‘sacrifice’ in his Sacre but the physical and emotional demands of a dancer’s daily rehearsal ritual trumps all. An unwavering commitment to the art of dancing and dance-making imbues all four works in tonight’s program – relentless preparation, remarkable artistry and (Re)Visionary performances.

With (Re)Visionary Dances, University Dance Company celebrates its protean capacity both to consistently generate new visions for the stage and re-envision landmark moments from its extraordinarily rich legacy. For our 38th season, we build a program of new dances by three UM faculty choreographers around a master dancemaker’s re-envisioning – or better, reinvention – of the most radical, defining moment in 20th century music and dance.

On May 29, 1913, Serge Diaghilev’s Ballets Russes premiered Le Sacre du Printemps in Paris, with a tumultuous score by Igor Stravinsky and stark, spasmodic choreography by the unrivaled male dancer of his time, Vaslav Nijinsky. The score became the bedrock of Modernist movements in music, but Nijinsky’s original vision was largely abandoned after its premiere performances, left to fade into dance history until it was painstakingly re-constructed in 1987 for the Joffrey Ballet from first-hand accounts, photographs, and illustrations. By that time, other choreographers had begun to re-imagine dances to Stravinsky’s implosive rhythms: Martha Graham, Pina Bausch, Maurice Béjart, Doug Varone, to name a few… and the enfant terrible of his own generation, Paul Taylor. Taylor’s 1980 vision re-frames the barbaric rituals of the original with its mid-century equivalent: gangster movie violence and Grade B film noir intrigue. With a cinematic vision for multiple story plots, splices, jump cuts, cross-dissolves, Taylor superimposes the one plot upon another: of the ritual he knows best, a typical dance company in rehearsal under the stern vision of the rehearsal mistress.

Everything old is new again. To open a triptych of faculty works, Amy Chavasse re-frames Woody Guthrie’s democratic vistas with an updated version for her cast of 21st century youth. Is it optimism, savvy humor, strange seduction or cheeky irony that we detect in these loopy reiterations? Through Chavasse’s lens, we re-evaluate iconic geographies of the American body and spirit. Sandra Torijano envisions the overcoming of adversity as a process of personal transformation supported by friendship and love, and guided by an opening to spiritual forces and values. The result is a flourishing, a radiant epiphany: a New Moon. Jessica Fogel looks at the poetry of lightness and the effervescent medium of space as a particle physicist might observe, in the swirl of a particle accelerator. The invisible becomes visible, and lightness suggests light, seeing the light, i.e. vision, as in visionary, or (re)visionary experience: the very matter of modern dance. We hope you enjoy the spectacle! 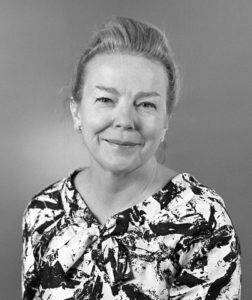 The Department of Dance dedicates (Re)Visionary Dances to the memory of a true and loyal friend of (the) dance, Trudy Huebner. Gertrude Veneklasen Huebner, 94, died Nov. 13 at home in Ann Arbor and her loss will be deeply felt by her dance family. We remember her not only for her generous named scholarship given annually to a worthy dance student but for her worldly-wise irreverence and her steady attendance at all dance performances. We are also grateful for her years of service as a UM regent and as a role model for a successful woman in a man’s world. Working thirty-five years in advertising, she created award-winning copy and jingles that became advertising icons for decades, and also created the first live national television commercials, including Gillette’s “Look sharp every time you shave,” “The Heinz Aristocratic Tomato,” and “Indescribably Delicious” for Peter Paul Mounds. She loved to travel to exotic places and danced with the penguins in Antarctica. No wonder she loved the lively art of dance! Trudy, we dance for you.