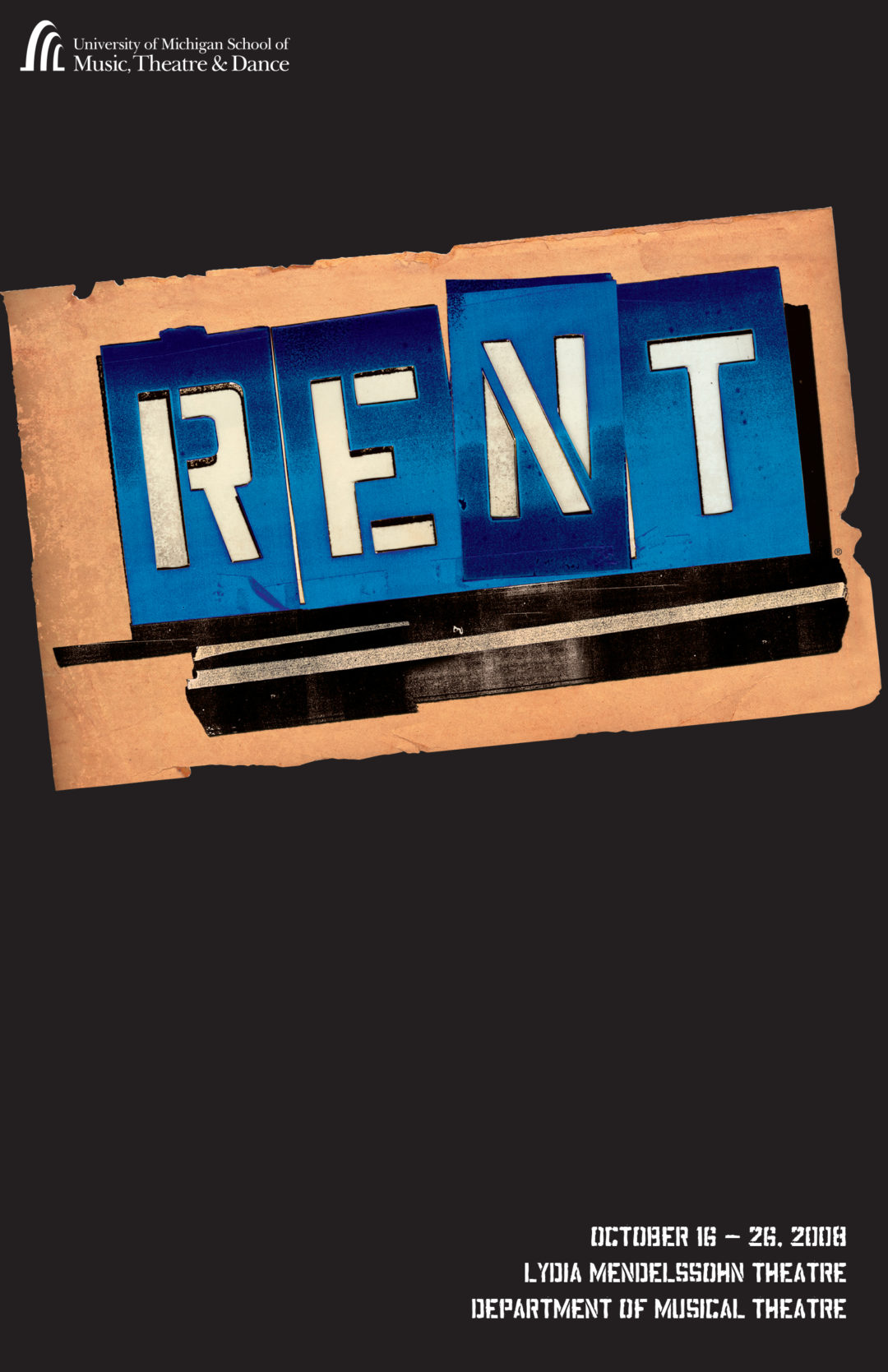 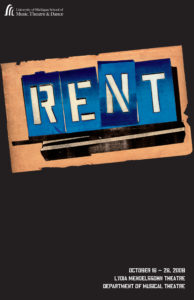 The Story: Set in a bohemian community of artists in New York City’s East Village during the 1990s, Rent follows eight impoverished young artists and lovers struggling to survive and create under the new specter of AIDS. They embrace their uncertain futures, facing each day with enthusiasm and humor, living life to the fullest as if there were “no day but today.” Rent features an inventive score that combines a rock sound with intricate choral work and dexterous lyrics that shine in songs such as the poignant “One Song Glory,” “Seasons of Love,” and the exuberant “La Vie Bohème.” Ben Brantley of the New York Times declared Rent “an exhilarating, landmark rock opera… [that] shimmers with hope for the future of the American musical.”

Artistic Significance: Thirty-five-year-old composer Jonathan Larson spent seven years perfecting his show that would “bring musical theatre to the MTV generation.” From its beginning at the New York Theatre Workshop through its move to Broadway, Larson’s contemporary version of Puccini’s La Bohème was embraced with an immediate critical and popular frenzy far beyond the normal Broadway success story. Rent swept the 1996 musical awards for both Off-Broadway and Broadway productions and earned Larson the coveted Pulitzer Prize for Drama, only the seventh musical to do so in the award’s 90-year history. Tragically Larson died unexpectedly of an aortic aneurism on the eve of the show’s first public performance at the NYTW, never to know that his dream had been realized. As part of its 25th Anniversary season, the Department of Musical Theatre is thrilled to be one of the first regional companies to produce this theatrical phenomenon.

When I first saw the Broadway production of Rent I thought it was great fun. The energy was thrilling, the music terrific and the excitement infectious. Now, twelve years later I also see it as a retrospective look at the 1980’s and 1990’s in New York when the entire city seemed to be shrouded by a cloud. Rent deals with a NYC in the midst of an AIDS epidemic, massive drug addiction, streets littered with homeless, and the “normal” people who perished and survived these times. Then a New Yorker, I lived in a building featured on the cover of New York magazine captioned as a, “Westside apartment building longtime famous for drugs, prostitution and white slavery.” I like any youth, found joy and excitement in these times and the horrors of the present were only a part of the city’s social landscape. Working on Rent surprised me with memories both good and bad, brought up anger and sadness and sorted out many mysteries of my past. We, as the characters in Rent, dealt with a frightening future surrounded by a disease that killed indiscriminately. Jonathan Larson, before his unexpected death, wrote a timeless musical and a loving tribute to his friends combining injustice, fear, community and hope into a theme greater than the tragedies of the time. As the characters in this story our cast’s youthful idealism clearly tells this tale with the same infectious enthusiasm I remember from my first viewing of this amazing piece of musical theatre.

Mark, a filmmaker, is spending a cold Christmas Eve in the Lower East Side industrial loft he shares with Roger, a musician. They receive several phone calls. The first is from Mark’s mother consoling him over the loss of his girlfriend Maureen, a performance artist, to Joanne, a Harvard Law School graduate. The second is from their friend Tom Collins. The last is from their landlord Benny demanding the rent. The power blows and so do Roger and Mark’s tops (Rent).

Outside, Collins, reeling from a mugging is comforted by Angel, a street musician, who offers him a helping hand (You Okay Honey?). Both HIV+, Angel and Collins head out for a night on the town and a life support meeting.

In response to a call for help, Mark sets out for the lot where Maureen is performing a protest against Benny’s eviction of the homeless from a nearby lot. He urges Roger, who has not left the apartment in six months due to the suicide of his girlfriend, to come along but he refuses. Roger tries to write a song but the only melody he finds is “Musetta’s Waltz” from Puccini’s La Bohème (One Song Glory). Mimi, an S&M dancer who lives below, knocks with a request: Light My Candle. The attraction between she and Roger is immediate, but Roger shies away and shows her the door. Mimi knocks again. She has lost her stash. Roger helps her look and Mimi eventually finds it.

Joanne’s parents call, pleading with her to come to Washington. Collins arrives at the loft with a bag full of goodies which include Angel, transvested into Angel Dumott Shunard. In Today 4 U, Angel explains how he earned $1,000: a woman hired him to play the drums until her neighbor’s dog barked itself to death.

Benny enters with a proposal (You’ll See): if Mark and Roger stop Maureen’s protest, he will forgo the rent. He entices them with plans for Cyber Arts, a state-of-the-art, multimedia studio that will realize all of their dreams. Unsuccessful, Benny leaves. Mark, Collins and Angel leave for the life support meeting without Roger.

Mark reaches the lot where Maureen will perform her protest and encounters Joanne. Though they dreaded meeting, they have a lot in common (Tango: Maureen). Once he finishes, Mark joins Angel and Collins at the Life Support meeting.

Mimi appeals to an imaginary Roger to take her Out Tonight. She barges into his apartment and continues her appeal to Roger himself but after a passionate kiss he vehemently rejects her. They fight, her words blending with the affirmation of the support group that emphasizes the importance of living the moment (Another Day).

Discouraged by life in New York, Mark, Angel and Collins dream of opening up a restaurant in Santa Fe. Alone at last, Angel and Collins express their love for each other (I’ll Cover You). Meanwhile, Joanne has her hands full juggling work, parents, and the ever-demanding Maureen…(We’re Okay).

The scene changes to St. Mark’s Place where vendors hawk their wares to the bohemians of the East Village (Christmas Bells). Angel buys a new coat for Collins. Roger spots Mimi looking for drugs. Roger apologizes and asks her to dinner. Maureen finally appears to perform her protest, Over The Moon.

Following the protest, all convene at the Life Café, including Benny who announces that Bohemia is dead. Thus ensues a makeshift mock-wake that quickly segues into a celebration of La Vie Bohème. Benny confronts Mimi and threatens to reveal their past affair to Roger. Beepers go off to remind the revelers to take their AZT. Roger and Mimi each discover that the other is HIV+. Frightened, excited, they vow to be together (I Should Tell You).

Joanne tells Maureen that their relationship is over and announcing a riot in the lot: Benny has padlocked the building and called the cops but the homeless are standing their ground. The artists rejoice, and Roger and Mimi share a small kiss.

The second act begins with the company posing the question, “How do you measure a year in the life?” (Seasons of Love). One week later, New Year’s Eve, and they are having a breaking-back-into-the-building party (Happy New Year). Once inside, Mark listens to a phone message from his mother and one from Alexi Darling, a tabloid TV producer. Benny crashes the party, angering Roger and alienating Roger from Mimi. Dejected, Mimi wanders outside and into the arms of her drug dealer.

By Valentine’s Day, Maureen and Joanne are rehearsing another show, but it is not going well (Take Me Or Leave Me).

Seasons Of Love marches time forward to spring. Roger and Mimi have a fight and Roger walks out. Alone, Mimi reflects on life without Roger (Without You). At the same time, Collins nurses a sick Angel; Maureen and Joanne reconcile; as do Mimi and Roger.

At the end of the summer, Alexi is still courting Mark for her TV show. Roger and Mimi, unsatisfied by love’s complications, break up, as do Maureen and Joanne. Angel dies (Contact). At a memorial service, his friends remember his spirit (I’ll Cover You Reprise).

Outside the church, Mark phones Alexi to accept the job. Mark ponders how life has changed since last year (Halloween). As the mourners leave the church, Mimi confirms that Roger has sold his guitar and is leaving town. Roger confirms that Mimi is now with Benny. A fight erupts amongst the friends. Collins interrupts them with the sorrowful reality that the family is breaking up. Joanne and Maureen reunite. Mimi and Benny leave.

Mark tries to convince Roger to stay in New York and face his pain and the fact that Mimi is very sick. Roger attacks Mark, accusing him of hiding from his feelings. Mimi enters, having overheard the entire angry exchange, and bids Roger farewell (Goodbye, Love). Roger leaves town. Mimi turns to Mark for help. Benny offers one helping hand to Mimi and extends the other to Collins to help him pay Angel’s funeral expenses. Mimi refuses the help and flees. Collins accepts and he and Benny go out for a drink.

Mark considers the events and faces the last year, as does Roger, who is on his way to Santa Fe. Roger begins to discover his own song and Mark turns down the television job to finish his own film (What You Own).

Back at the loft, Mark tells us it’s Christmas again and he now has a rough version of his film. Roger has returned, but cannot find Mimi. Collins enters with money he has gotten from an ATM rewired to give money to anyone with a special code, ANGEL.

Maureen and Joanne suddenly arrive holding Mimi, whom they found collapsed and near death. Roger begs her not to die and sings her the song it has taken him all year to write, Your Eyes. Mimi dies as Roger wails her name over a blast of Puccini’s music. Suddenly Mimi awakens, it seems that a guardian Angel was watching over her.

The company joins in a reprise of the affirmation that love is all and that there is “no day but today” (Finale).