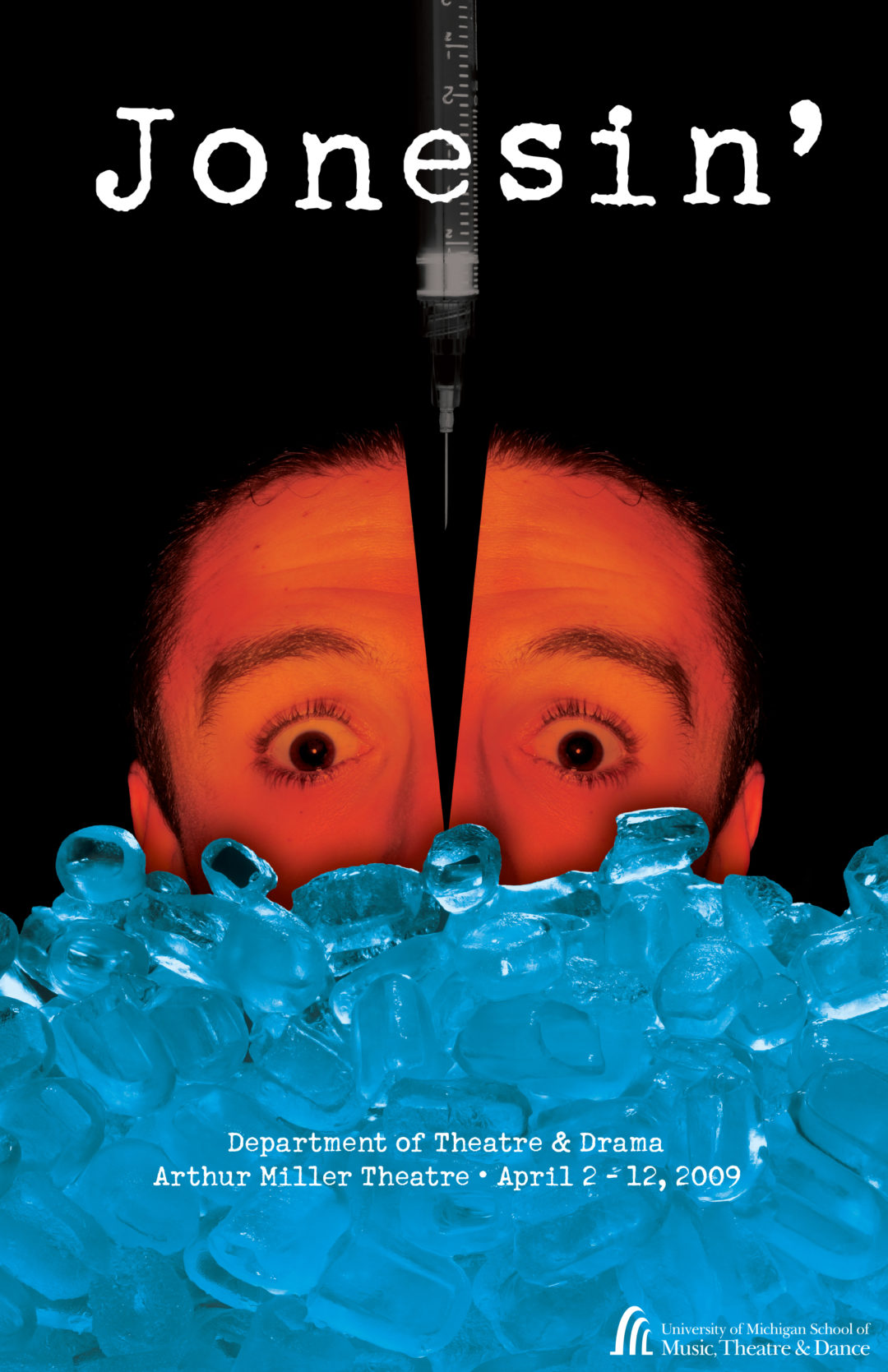 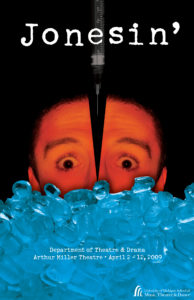 The Story: Drug dealer Terry and his girlfriend Riki have hit the big time with an alluring new product guaranteed to eliminate all your addictions without the pain of withdrawal. But the prospect of starting clean comes at a cost – a harrowing and terrifying two-day hallucinogenic journey of psychological turmoil. As Terry nurses his “clients” through the process, his own demons and insecurities emerge, particularly those in regards to his fledgling romance with Riki. Terry begins to question if feelings such as joy, power, depression, and love, which form our personality and soul, are addictive in and of themselves. When love changes from being a simple pleasurable emotion to a painful, paranoid obsession, Terry must make some difficult choices to be free of dependency.

Artistic Significance: Jonesin’ won the top prize for the 2008 Hopwood Award for Undergraduate Drama and also garnered the McIntyre Prize and Saferstein Literary Award. Department of Theatre & Drama senior Seth Moore has written plays and poetry since a young age. A number of his works have been presented in New York City by his two-man group, Prophet in your Pocket, and his most recent play, CATCH, debuted this past summer at the Cinci Fringe Festival with Transit Five Productions. The Cincinnati Conveyor declared Moore “A writer chock full of ideas and perspective.” Bleak and disturbing, Moore utilizes raw, expletive-charged language to capture a street-wise world where addiction rules. Don’t miss a gritty drama that Hopwood judges declared had “real verve, vision, and passion” by this developing playwright.

The School of Music, Theatre & Dance acknowledges the generosity of McKinley Associates, Inc., whose support has helped make this production possible.

Playwriting Professor OyamO surely must be one of our hardest-working faculty members. He accepts more than his share of students into his playwriting classes, all of whom have a weekly quota of pages to fulfill, and he reads all of their work. When time came to choose a play for this season, I approached OyamO to see if there might be a current student whose work merited production. He steered me towards Seth Moore. Seth came to our first meeting with a folder of work. On my first reading of his current work, Jonesin’, two factors were evident. One: it was too long. Two: the writing was fresh and exciting. After receiving the go-ahead and support from the Department, we began the preparation process.

The first step was to have a reading to hear the play aloud. This reading gave me a clearer idea of how the material might be shaped, cut, rewritten, and adjusted to be closer to a performance script. Seth listened patiently and openly to my suggestions, gently corrected me on some mis-readings, and defended other ideas that were under siege. Over the summer and fall, he wrote a new draft and we had another reading.

The second reading confirmed some ideas I had been considering. All the locations within the play were specified in the script; the staging did not necessarily have to do so. There was a risk of making the concerns of the play local rather than allowing their universality to emerge. Together with scenic and video designer Justin Lang and lighting designer Craig Kidwell and inspired by the use of video by Complicité, we hope to create “spaces not places” – not only for the action to take place in but also to reflect the shifted perspective and reality of the characters. Rachel Jahn has had her work cut out for her preparing blood effects as well as designing the costumes. Henry Reynolds, with two Performing Arts Technology students, will provide the soundscape for the production: an oft overlooked though highly manipulative element of production.

Finally, the language: this is an expletive-laden play. I believe this is as much a rhythmical device as a form of contemporary expression. If it did not put off the Hopwood Committee, I think we can live with it!

From seed, to scribble, to page, to two, to script, to reading, to design, to speech, to movement, to sparks, to more seeds, to rewrites, to conversation, to argument, to exploration, to first steps, to dance steps, to music, to more rewrites, to rehearsals, to lights, to costumes, to tech, to performance, to, hopefully, more seeds – more sparks.

To me, the production of a new work lends power and integrity to a group because it will forever be their work, their child. In previous weeks I have watched my colleagues become a force of pure innovation, which has been equally humbling and inspiring. I no longer feel like I am part of a school, but part of a company of artists working to create a whole, of which I am but one small part.

Realizing this play has been, to say the least, a journey and a dream. Much like Terry’s, it has been one of self-discovery and feeling around in the dark. I feel honored to have an amazing team who has been able to shine light on these words, make sense of the these rhythms, and help me to clarify aspects of my own craft which I’m still attempting to wrangle.