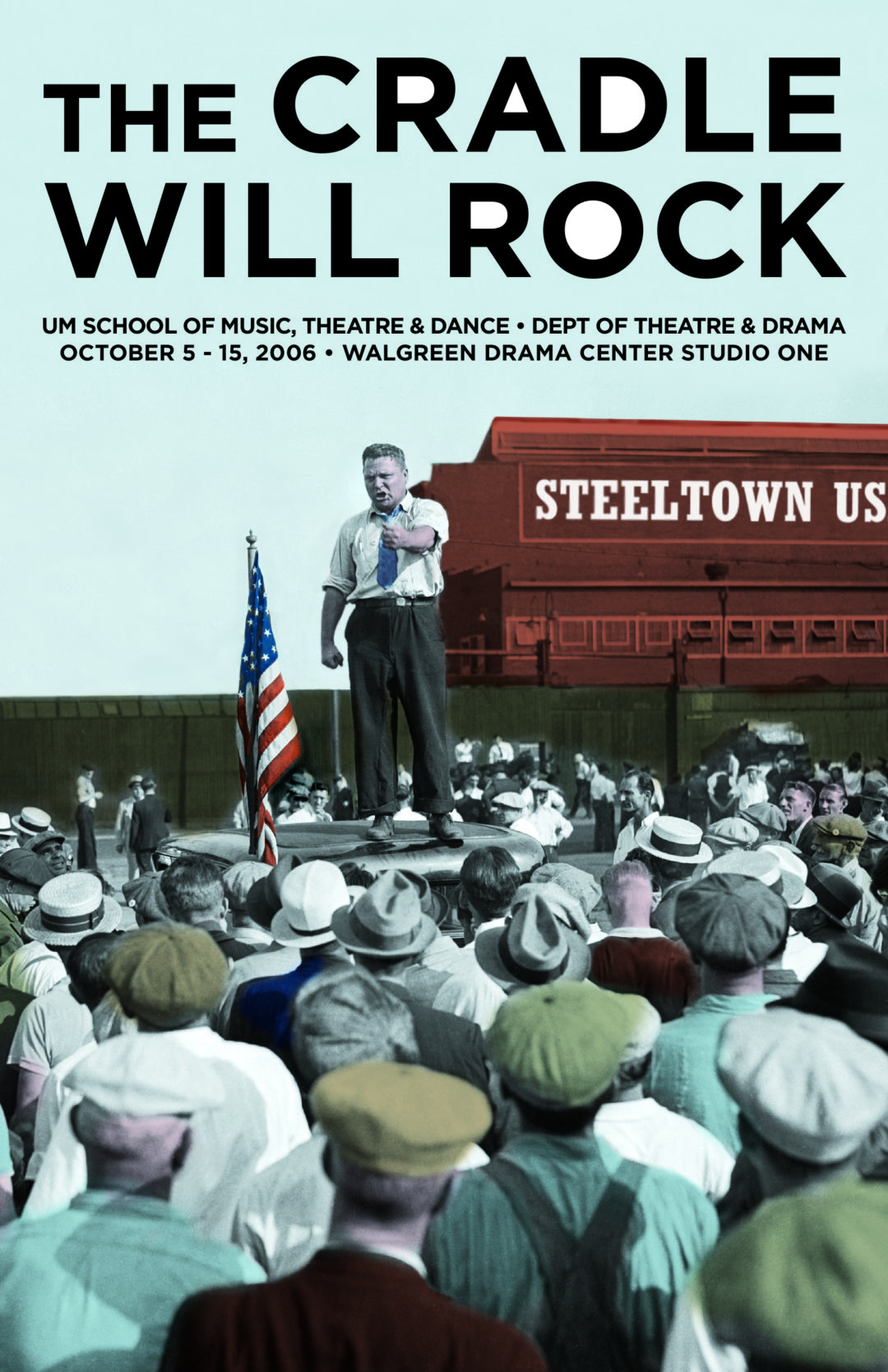 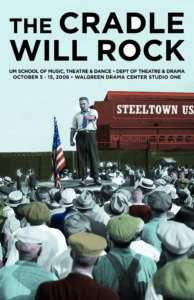 The Story: Written in 1937 by Marc Blitzstein, The Cradle Will Rock is a music drama. An extraordinary example of socially conscious theatre, Cradle depicts a conspiracy to subjugate workers and their calls for a union uprising. Set in fictional “Steeltown, USA,” Cradle has a disturbing relevance to the issues affecting labor today.

Artistic Significance: The Cradle Will Rock is best known for the events surrounding the play’s opening in 1937. In the context of frequent bloody clashes between unions and corporations of the 1930s, Cradle’s subject matter was politically incendiary. Part of the Federal Theatre Project, a program of the WPA, the play was put ‘on hold’ at the last moment due to “budget cuts,” a move generally believed directly to target Cradle due to its political viewpoint. The efforts of producer John Houseman, director Orson Welles, actors, and the composer to open on time and the audience who witnessed that first performance has become as much a part of the play as the original composition. Brooks Atkinson of The New York Times wrote “the show raises a theatregoer’s metabolism and blows him out of the theatre on the thunder of the grand finale.” As Hallie Flannigan, head of the Federal Theatre Project said of Cradle, “the theatre, when it’s good, is always dangerous.” Our production will recreate the energy that many called the most moving theatrical experience of their lives. Don’t miss this theatrical legend.

[accordion title=”About The Cradle Will Rock“]

“It is clear to me,” composer Blitzstein wrote in 1935, “that…Music must have a social as well as artistic base; it should broaden its scope and reach not only the select few but the masses.” Shattered by the sudden death of his wife Eva in 1936, and in order to escape his grief, Blitzstein threw himself into his work, beginning composition of a political opera, suggested to him by Brecht some months earlier, which would demonstrate the various ways in which people sell “themselves, their art, their ideals.” In a creative frenzy, The Cradle Will Rock was completed in six weeks. 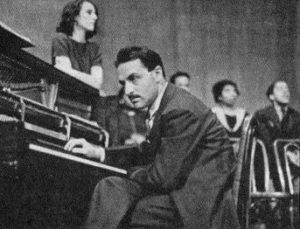 Marc Blitzstein at the piano during rehearsals for The Cradle Will Rock, 1937

In 1937 producer John Houseman and a 21-year-old director named Orson Welles decided to produce The Cradle Will Rock for the Federal Theatre Project – part of the Works Progress Administration, President Franklin Roosevelt’s jobs program during the depression. Welles had grand plans for the The Cradle Will Rock, envisioning a visually and technically ambitious production design for the show. His expectations for the actors were no less ambitious. It was not uncommon for Welles to start a rehearsal at 10 AM and keep the actors working until 4 o’clock the next morning.

Meanwhile, the labor movement – after nearly 50 years of struggle – was gaining momentum during the months just before The Cradle Will Rock was scheduled to open. In addition to the steel industry, the labor movement was building support with workers from a number of other industries including the auto workers, miners, farm workers, textile workers, metal workers, and seamen. As the number of volatile confrontations between labor and management increased, Congress blamed the WPA and decided to implement financial cuts to the program.

On June 10, 1937, Flannigan was ordered to cut 10% of the FTP budget and all new shows in New York City were forbidden to open until July 1, effectively canceling the scheduled June 16 opening of Cradle. Welles and Houseman pleaded their case to open as scheduled to no avail – over 14,000 advance tickets had been sold for the run of the show. With the governmental edict, both the Actors’ Equity Union and the Musicians Union imposed restrictions on their members performing. Ironically, unions themselves were undermining a show about unions. Welles and Houseman determined that the show would go on – no matter the consequence.

On opening night, hundreds of ticket-holders showed up outside the padlocked and guarded Maxine Elliott Theatre anticipating a night of musical entertainment. As the actors entertained the crowd, Welles and Houseman desperately telephoned theatres all over the city looking for another location to open the show. Finally, after securing the Venice Theatre, they led the audience on a 20-block march uptown, piano in tow, gathering additional audience members on the way.

As the audience filed into the theatre Blitzstein sat alone, at a piano, on the stage. In the true spirit of “the show must go on…” he began to play and sing the score himself. Then, seemingly out of nowhere, actress Olive Stanton began singing her part from her theatre seat. Her voice trembled at first when the spotlight flashed on her. But as she stood and continued her voice grew stronger and louder. Other actors were inspired to do the same and the entire show was performed by a company sitting in the theatre seats and accompanied by a single piano. When the performance ended there was thunderous applause and a theatre legend was born.

The Cradle Will Rock ran for a further 18 performances at the Venice Theatre. It then re-opened at the Windsor Theatre in January 1938, produced by Sam Grisman, although still without props, and with Blitzstein playing the piano, where it ran for 108 performances.

Welles resigned from the Federal Theatre Project over the controversy and Houseman was fired under a WPA rule which forbade the employment of non-American citizens. Blitzstein went on to compose Regina, The Airborne Symphony, and Reuben Reuben. Blitzstein died on January 22, 1964. Aaron Copland wrote of Blitzstein, “His purpose was not merely to write the words and music of effective theatre pieces; he wanted to shape each piece for his own ends, to shape it for human ends. He took a certain pleasure in needling his audiences, in telling unpleasant truths straight to their faces. To sing these truths only gave them greater poignancy. The moral fervor that fired his work in the depression-haunted ‘Thirties resulted in the writing of The Cradle Will Rock. The opening night of Cradle made history; none of us who were there will ever forget it.”

As America emerged from the Great Depression, the WPA provided the highest level of governmental support for the arts in our history. The Federal Theatre Project alone created over 3000 theatre groups across the country, and the country responded; for an all-too-brief period the theatre was an active force in the lives of ordinary working people like my parents. The extraordinary opening night of The Cradle Will Rock was in many ways the point at which this great wave of socially active and publicly-funded theatre broke, and the point from which it has rolled steadily back into the murky shallows in which we find ourselves floundering today. I was fortunate to know John Houseman and to talk with him about that night, and to interview also several people who were in the audience. We hope tonight to recreate not just the play, but its social setting as well, and we invite your participation. The piece remains relevant: though unionism, once a burning issue, is today barely an ember, nevertheless the deeper issues of integrity and justice driving the play are more important than ever. Our shifting economy and governmental policies have created a greater chasm between the “haves” and the “have-nots” than existed even in 1937. Mr. Mister is alive and stronger than ever, though today he sits in the boardrooms of multinational corporations.

← The Laramie Project The Pajama Game →