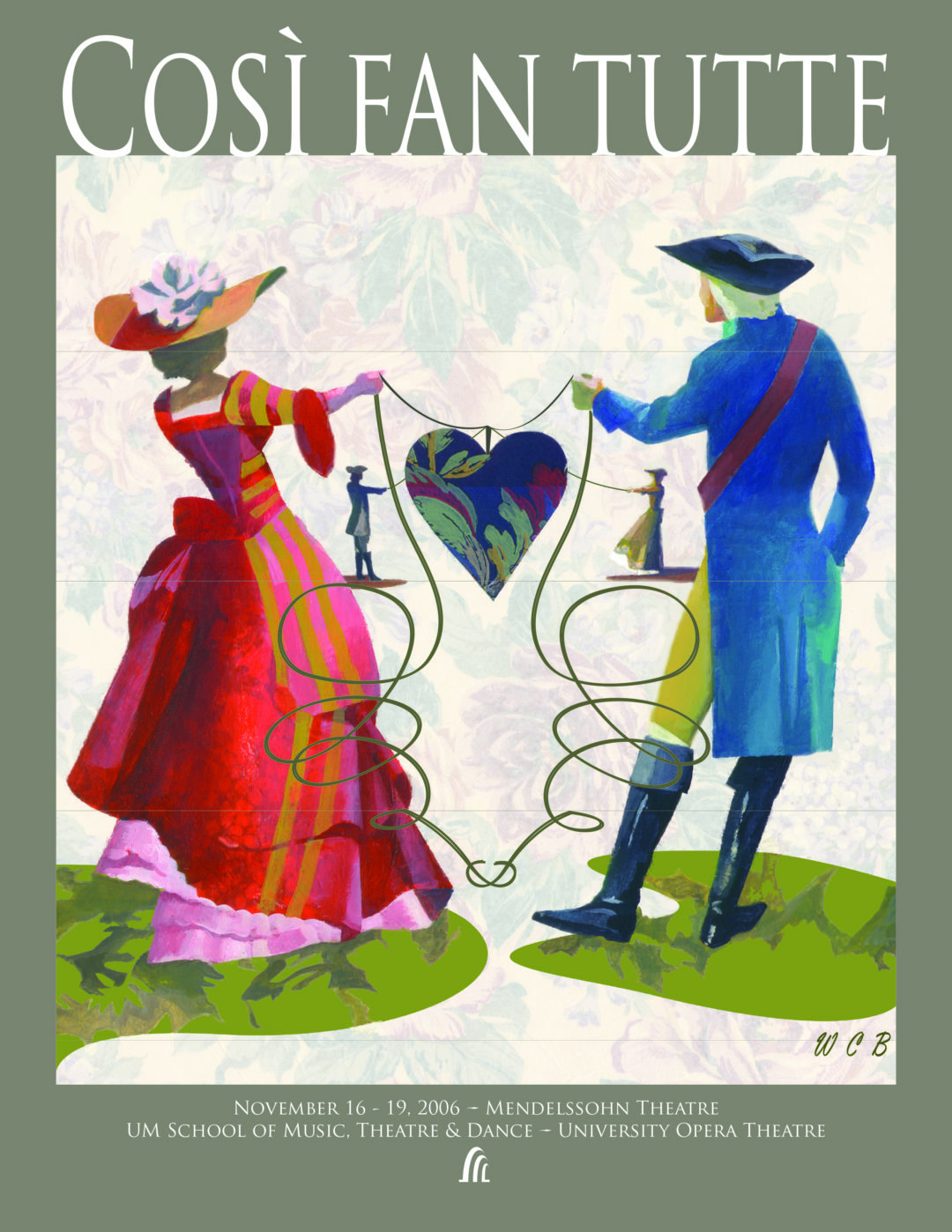 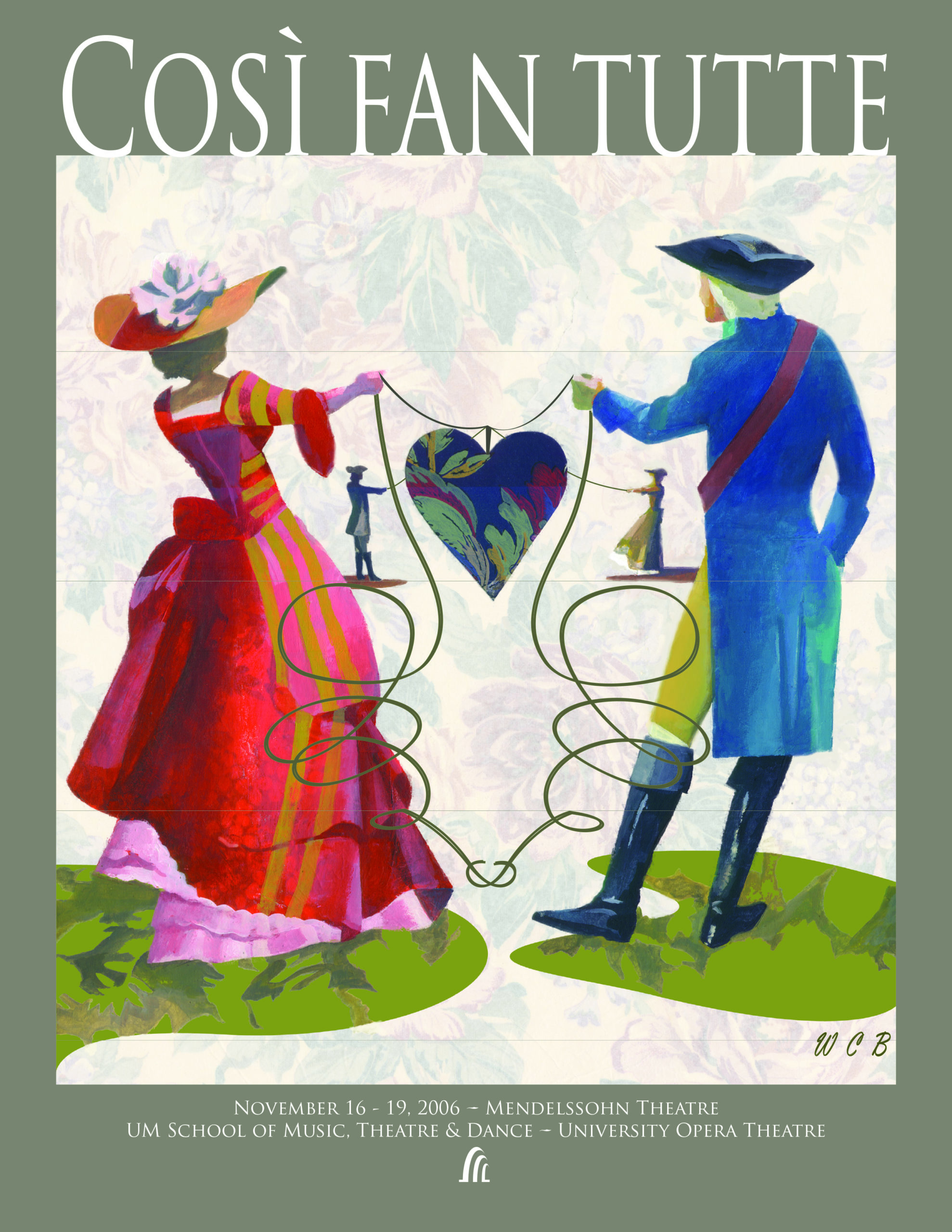 or The School for Lovers

The Story: Egged on by a cynical misogynist, Don Alfonso, who claims that women are by nature unfaithful, two young men bet that their girlfriends, who are sisters, will remain loyal. Drawn away by a trumped up call to arms and aided by Alfonso and a maid, the men return in disguise to woo the girls in an intriguing and often comic game of fiancée swapping. The sisters initially resist the advances, but eventually break down after a series of tricks, and declare their adoration for their new loves. But sometimes a joke can go too far and the young men begin to regret their actions as they find their own hearts are equally susceptible to change. When the young men reveal their deception to the sisters and their own disloyalty, all bets are off as the capriciousness of love muddles who really loves whom.

Artistic Significance: Così fan tutte is the third and last of Mozart’s great operas written with librettist Lorenzo da Ponte, following closely on the heels of their success with Don Giovanni. The score is one of unsurpassed tenderness and perception – a complete union of words and music. Così features beautiful arias including “Come scoglio,” “Smanie implacabili,” and “Per pietà” and incomparable ensembles that highlight both the laughter and pathos in the story. The opera’s plot was considered scandalous during its time and only gained international popularity in the 20th century. Presented in honor of the 250th Anniversary of his birth, Così fan tutte is a exquisite and intimate opera written at the summit of Mozart’s creative genius.

Don Alfonso, an old bachelor, debates women’s constancy with Ferrando and Guglielmo, young officers who insist their sweethearts – the sisters Dorabella and Fiordiligi – are faithful. Alfonso bets that if they give him one day and do everything he asks, he will prove the sisters are like all other women – fickle. Fiordiligi and Dorabella are comparing pictures of their boyfriends when Alfonso pays a visit, bringing news that Guglielmo and Ferrando have been ordered away with their regiment. The two men appear, and the sisters, overwhelmed with grief, bid them farewell. Alfonso is delighted with his plot and feels certain of winning his wager. The chambermaid, Despina, consoles her mistresses and advises them to forget their old lovers with the help of new ones. The girls, scandalized by Despina’s depiction of men as swaggering liars, depart. Alfonso convinces Despina to help him introduce new suitors into the sisters’ favor, then brings in exotically attired “Albanians” – Ferrando and Guglielmo in disguise. Fiordiligi and Dorabella don’t warm to the newcomers at all, Fiordiligi likening her constancy to a rock in a storm, and they take their leave again. The men, confident of winning their bet, are thrilled, and Ferrando sings amorously of his steadfast sweetheart, but Alfonso reminds him the day is not yet over. The sisters have retreated to a garden. Alfonso brings in the “Albanians,” who claim to have taken poison. The women call Despina, who urges them to care for the men while she fetches a doctor. She returns disguised as the doctor, pretends to draw off the poison with a magnet, then watches with Alfonso as Fiordiligi and Dorabella waver under renewed protestations of love.

In the afternoon, Despina urges Fiordiligi and Dorabella to choose their favorite, and each picks the other’s suitor, according to Alfonso’s plan. After the “Albanians” serenade the sisters, Despina and Alfonso give lessons in courting and leave the young people together. Guglielmo, courting Dorabella, succeeds in replacing her portrait of Ferrando with a new charm. Ferrando has no such luck with Fiordiligi, who still thinks guiltily of Guglielmo. Comparing notes later, Ferrando is furious over Dorabella’s betrayal, Guglielmo smug about Fiordiligi’s steadfastness. But Alfonso is not finished yet. Under Despina’s supervision, Dorabella tries to persuade Fiordiligi to give in, but Fiordiligi decides that she and Dorabella must join their lovers at the front. Ferrando appears, however, and wins her over. Now Guglielmo is furious, but the officers still owe Alfonso time: as night falls he plans a double wedding. The couples are married by a “notary” – again Despina in disguise. As they sign the contracts, the women hear a military march that heralds the return of their original suitors. They force the “Albanians” into hiding and try to compose themselves for Ferrando and Guglielmo, who shed their disguises and enter, dressed as soldiers. Confessions are made by the sisters, and forgiveness is begged. Alfonso bids the lovers learn their lesson, and with a hymn to reason and enlightenment, the day comes to a close.

← The Pursuit of Persephone You Can’t Take it With You →