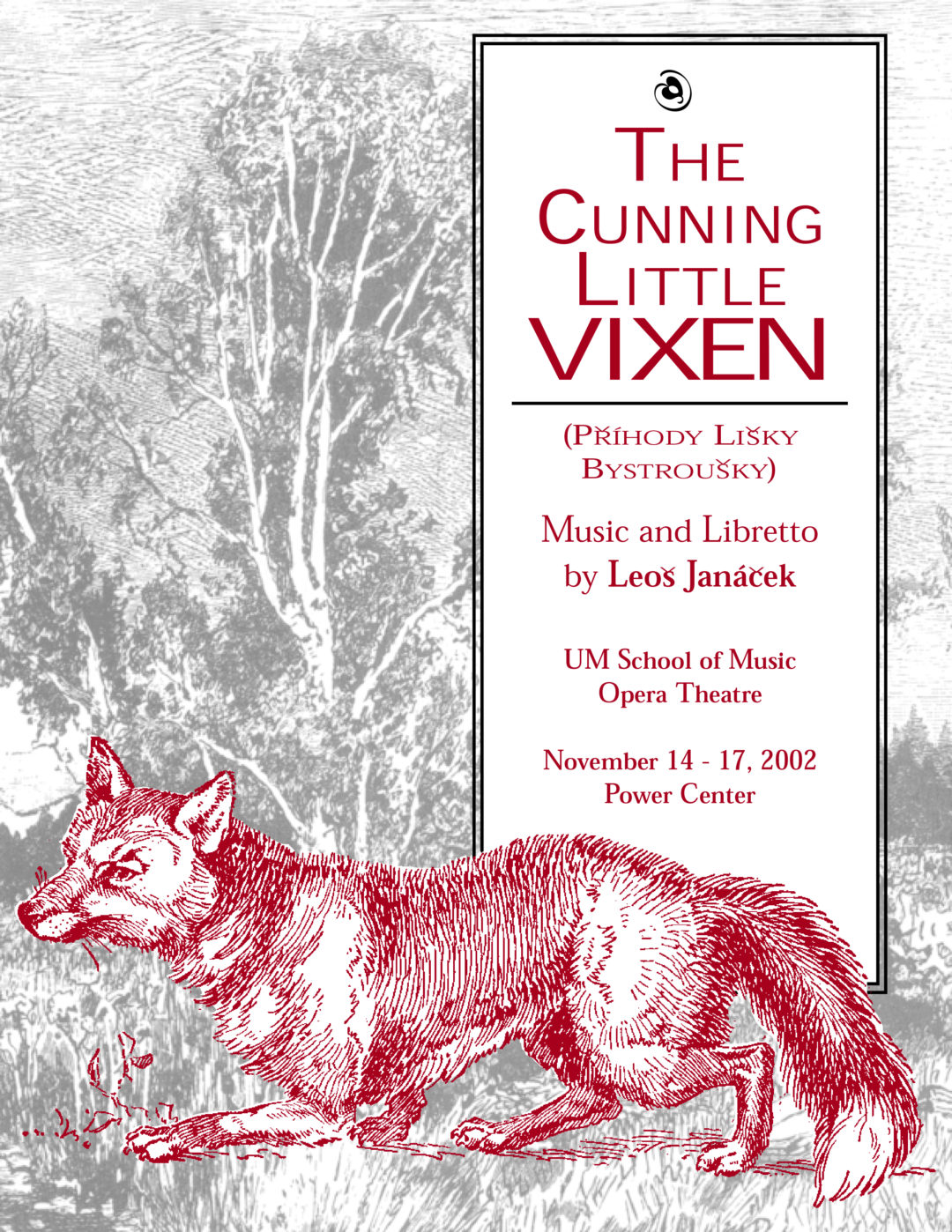 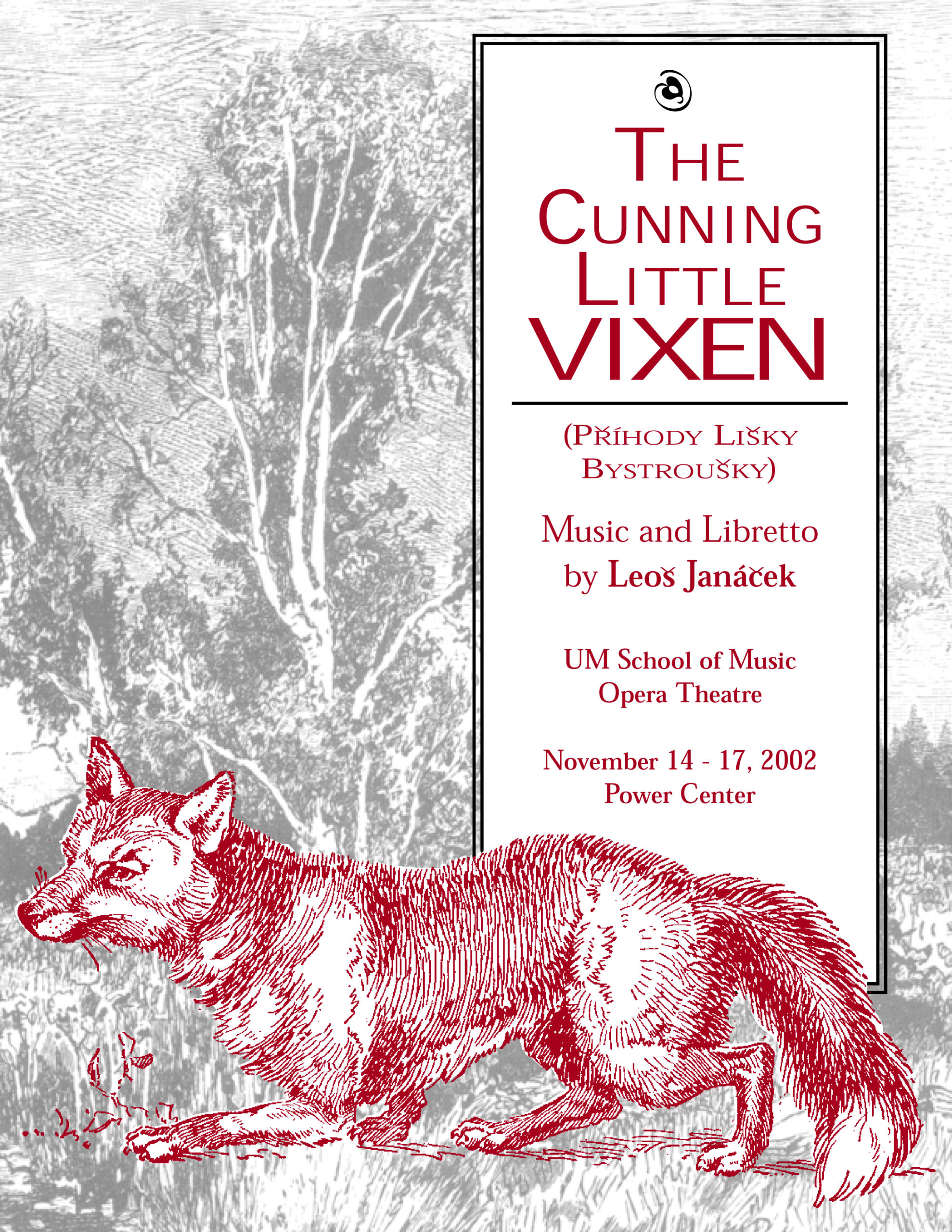 Summer; the forest in the afternoon – The animals play in the forest. The Forester, on his way home, stops for a nap. While he is asleep the Cricket and the Grasshopper make music. A young Frog, trying to catch a Mosquito, attracts the attention of a vixen cub. The Frog lands on the Forester, waking him. The Forester grabs the Vixen and takes her away. Dusk falls. The Blue Dragonflies search for the Vixen.

Autumn; the farmyard – The Vixen, now being reared as a pet, befriends the dog and rebuffs his advances. When she defends herself against the teasing of the Forester’s son and his friend, she is tied up. Night falls and the Vixen sleeps. In her dreams her spirit soars to freedom. At dawn the Vixen scoffs at the hens: they are exploited by humans and by their leader, the Rooster. The Vixen appeals in vain to the hens’ feminist feelings and, shocked at their conservatism, feigns suicide. Her plan has worked: when the Rooster is sent to investigate, she kills him, then polishes off all the hens. Confronted by the Forester and his wife, the Vixen bites through her rope and escapes.

Autumn; the forest in the late afternoon – The Vixen taunts the Badger, ruthlessly evicts him from his comfortable home and takes it over.

Autumn; the forest in the moonlight – As the Schoolmaster stumbles drunkenly home, the Vixen peeps out through some sunflowers. The Schoolmaster mistakes her for Terynka and pours his heart out. The Priest, also the worse for drink, catches sight of the Vixen and confuses her with a girl he was wrongly accused of seducing when he was young. The Forester takes both men by surprise and fires two shots after the Vixen.

Summer; the forest in the moonlight – The Vixen meets a handsome Fox and tells him the story of her life. The Fox woos her, they mate, and, having scandalized the gossiping birds, are married. The forest creatures celebrate.

Autumn; the forest at midday – Harasta, a poultry-seller, is about to pick up a dead hare when he sees the Forester, who suspects him of poaching it. Harasta explains that he is on his way to see Terynka, whom he is to marry. The Forester, realizing that the hare is one of the Vixen’s victims, uses it as a trap for her. The Vixen, the Fox and their cubs poke fun at the clumsily laid trap and the parents happily watch their growing family. Harasta returns to collect the hare. The Vixen lures him away so that the cubs can rifle his bag. But her gloating triumph at outwitting Harasta angers him and he shoots her.

The Inn – The Schoolmaster weeps when he hears that Terynka is to marry. He and the Forester both regret that the Priest has moved away. The Forester reflects on his age and sets off for the forest.

Summer; the forest in the afternoon – The Forester muses on the beauty of the forest, where life is continually renewed. He recalls his courtship and wedding. As he daydreams, the forest creatures appear, including a little vixen. The Forester tries to catch her but catches a Frog instead – grandson of the Frog who attracted the Vixen’s attention at the beginning of her adventures. Dropping his gun, the Forester surrenders to the forest.