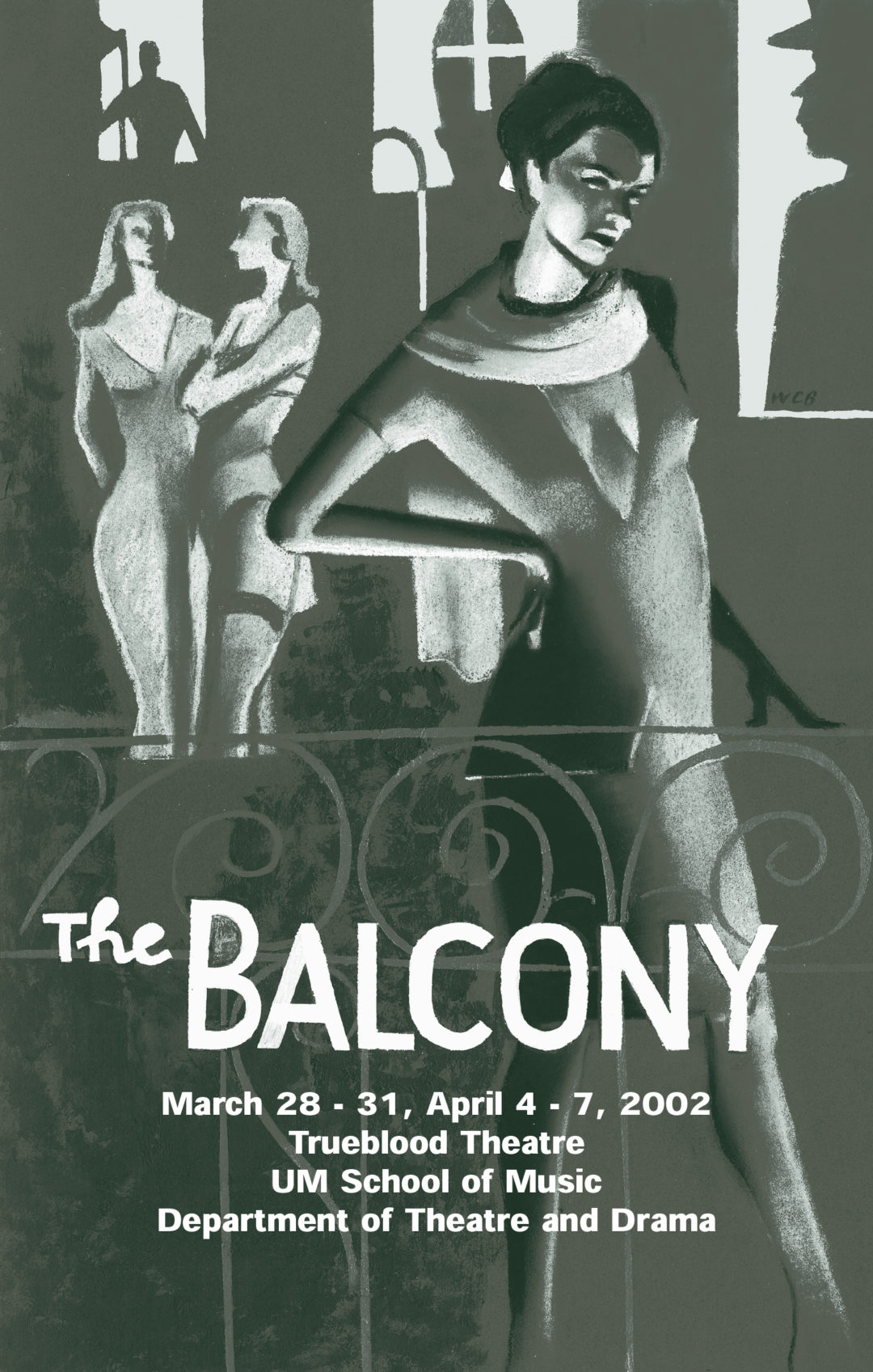 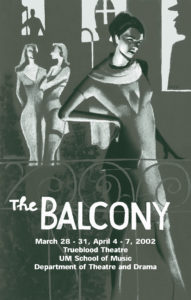 First staged at a private club in London because it was considered too scandalous for Paris audiences in 1956, The Balcony is set in the Grand Balcony, a brothel in a contemporary European city aflame with revolution. The Grand Balcony is a palace of illusions where men come to indulge in their secret fantasies. Inside, prostitutes assist patrons in play acting a variety of roles: a judge inflicting punishment on a beautiful thief, a bishop dealing with a penitent sinner, a general meditating on his relationship with his horse (played by a bridled prostitute). However, fantasy and reality become clouded when the insurgents in the street overthrow the Royal Palace and presumably kill the country’s queen and her court. It is then that the Police Chief replaces these dignitaries with their simulacra from The Grand Balcony, including the bordello’s Madame Irma assuming the role of Queen. As the masqueraders warm to their roles, they convince even the revolutionaries that the illusion created in the bordello is preferable to reality.

Ignoring traditional plot and psychology, the play relies heavily on ritual, transformation, illusion and interchangeable identities. Genet believed that virtually anyone could bear a name or a title and wrote all of his full-length plays – including The Balcony, The Blacks, The Maids, and The Screens – in order to expose and reveal how fraudulent liturgical, legal, and royal titles can be.

Seventeen young actors are gathered tonight on this Trueblood Stage to perform Jean Genet’s The Balcony. This is a challenge. And it has been one throughout the staging process of this “mythology of the whorehouse.” Genet wrote a mythology in which abstraction of reality became the leit-motiv of his artistic creation. The plot, the characters, the space, time, everything is an abstraction in this play. The abstraction attains the point of confusion, of bewilderment, and of embarrassment. The kind of embarrassment and uneasiness, but also the kind of self-enjoyment one feels when facing their own image reflected by the mirror. It can be an enormous mirror. It can also be a distorted mirror that reflects a twisted, deformed, and why not, tainted image of the individual.

This situation becomes more confusing when power and sex get involved with the mirror of a brothel. Thus, the individua1 character loses its individuality to encompass that of the others, those we dream of all the time of becoming. Sex… power … domination… possession… The individual, the actor for the matter, becomes possessed by those wandering spirits of vice and virtue. The mirror… the mirror… always the mirror reflects that change of status. Who are we? Who are they? This mythology poses the issue of our identity as a question of being or doing, and as a mode of existence or a function to fulfill.