Roshanne Etezady‘s music has been described in Fanfare magazine as “fresh, effusive, and immediately likable,” and she has been hailed by the Detroit Free Press as “a promising and confident composer.” Her music ranges from clever and colorful to sublimely subdued; it combines lyricism with rhythmic intensity and engages performers and audiences alike.

Etezady’s works have been commissioned by the United States Military Band at West Point, the Albany Symphony, Dartmouth Symphony, eighth blackbird, Music at the Anthology, and the PRISM Saxophone Quartet. She has been a fellow at the Aspen Music Festival, the Norfolk Chamber Music Festival, and the Atlantic Center for the Arts. Performers and ensembles including the American Composers’ Orchestra, Rêlache, Amadinda Percussion Ensemble, Ensemble De Ereprijs, and the Dogs of Desire have performed Etezady’s music throughout the United States and Europe. Etezady’s music has earned recognition from the American Academy of Arts and Letters, the Korean Society of 21st Century Music, the Jacob K. Javits Foundation, Meet the Composer, and ASCAP. 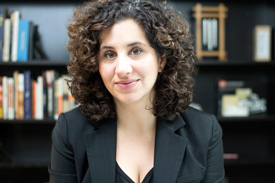