Hurst has performed on over 200 diverse and critically acclaimed productions. His contributions on a select group of these recordings have yielded seven GRAMMY Awards and several RIAA-certified­ multi-platinum and gold records. His own eight recordings as a leader have all garnered top ten and five-star recognition around the globe. You may also recognize him as the inaugural bassist in the house band of NBC’s The Tonight Show with Jay Leno, where he played for eight seasons from 1992 to 1999. His nightly performances and contributions in the form of arranging, composing, acting, and occasional music directing for the NBC program was highlighted with four EMMY® Awards in 1995, 1996, 1997, and 1999.

Hurst’s music transcends genre while keeping the improvisational genius and fascination of jazz glowing at its center. He has penned original music scores for several films including The Wood (MTV/ Paramount Productions) and Brown Sugar (Fox Films). Hurst appears on over 30 major motion film and video soundtracks, including featured solos and performances in many blockbusters including Ocean’s Eleven, Twelve and Thirteen, as well as Good Night, and Good Luck, featuring Dianne Reeves, on Concord Records (a 2006 GRAMMY Awardee for Jazz Vocal).

As a result of Hurst’s virtuosity, improvisational prowess, and unique multi-lingual styling, he has been recognized as an authoritative presence in the music industry. His ability to blend hip-hop backbeats, definitive gritty swing, and nuanced African and Latin textures is boundless and heralds Hurst as a sophisticated conceptualist and the ideal contemporary jazz bassist. Adored by students, critics, master musicians, and fellow educators alike, Hurst has expanded his reach of influence and presently serves as a dedicated associate professor of music, with tenure, and the director of Small Jazz Ensembles in the Department of Jazz and Contemporary Improvisation at the University of Michigan’s School of Music, Theatre & Dance (Ann Arbor). In addition to his activities as a full-time professor, worldwide touring and recording bandleader, premier sideman, and special guest performer and visiting arts fellow to over 40 institutions and counting, Hurst has released four critically acclaimed CDs on the Bebob label. Unrehurst Vol. 2 and Bob Ya Head received 2011 Critic’s Top Pick recognition, with Bob Ya Head reaching #9 on the CMJ charts. BoB: a Palindrome (2013) became his third consecutive release to receive a Critic’s Top Pick of the Year.

In 2014, the Presidential Scholars Foundation and Alumni Association invited Hurst, in recognition of achievements in his field and contributions to society, to serve as an honored speaker-panelist at the 50th Anniversary Presidential Scholars Summit in Washington D.C. This inaugural summit celebrated the past accomplishments of its program, its seven thousand alumni, and their ongoing work toward the advancements of its mission. Additionally, the Jazz Education Network has selected Hurst to present his clinic “Expanding Musical Ideas Through Rhythmic Variety” at their 6th Annual 2015 JEN Conference in San Diego, CA. Hurst maintains membership on the ISIM Advisory Council, has written skill and exercise material published for the Woodshed Master Class Series for DownBeat Magazine (Dec. 2013), and since 2002 has thoughtfully served on the board of directors for the John and Alice Coltrane Foundation. 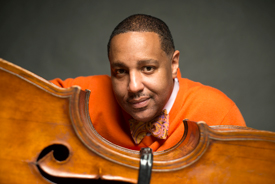