Joan Raeburn Holland is Associate Professor of Harp for the SMTD of the University of Michigan. Along with her position on the faculty at Michigan, Professor Holland is resident harpist and Instructor of harp at the Interlochen Center for the Arts. In addition to her strong commitment to teaching, she maintains an active career in solo, chamber, concerto performances and orchestral performing. She is currently principal harpist for the Midland (MI) Symphony Orchestra, co-principal of the Traverse Symphony Orchestra, Traverse City, MI, and substitute harpist for a number of Michigan orchestras. Before joining the faculty at Interlochen, she was principal harp for the Phoenix Symphony Orchestra and the Cleveland Ballet Orchestra. She has performed as substitute harpist for the Cleveland Orchestra, the Pittsburgh Symphony, the Baltimore Symphony, and the Ohio Chamber Orchestra.

An avid chamber musician, Professor Holland frequently performs with her colleagues, with appearances at the SMTD, Interlochen Chamber Music Concerts, at the Lexington Bach Festival, the Manitou Music Festival, the Thunder Bay Arts Council Series, the Dancing Bear Series, and in faculty chamber music series at various Michigan universities.
She has participated in recital programs for the regional and national conventions of the American Harp Society (AHS), appearing in their June 2008 concert honoring Alice Chalifoux, as recitalist for the Philadelphia Harp Festival, recitalist for the Toledo (OH) Chapter of AHS, and recitalist for the opening meeting of the Philadelphia Chapter. She performed the Sonata for Viola and Harp by Arnold Bax for the World Harp Congress and again for the International Viola Congress in Austin (TX), with violist David Holland.
Concerto performances include collaboration with the Midland Symphony Chamber Orchestra, the Great Lakes Chamber Orchestra, the Traverse Symphony Orchestra, the Lexington Bach Festival Orchestra, the Interlochen Arts Academy Orchestra, the Sault Symphony, Sault Ste. Marie (ON), the West Shore (MI) Symphony, the Ithaca Chamber Orchestra, and the Chamber Orchestra of Akron.
As a Board member of the American Harp Society, Joan served two terms and was instrumental in creating an online list and educational resource for the study of theory.
Ms. Raeburn Holland began her harp studies under the tutelage of Eileen Malone in the preparatory department of the Eastman School of Music. From the age of twelve and continuing through college, she studied with Alice Chalifoux, earning a Bachelor’s in Harp Performance from the Cleveland Institute of Music.
Joan and her husband David Holland, professional violist and conductor, have two children, Jennifer and her family, and John, both actively involved in music and visual arts. 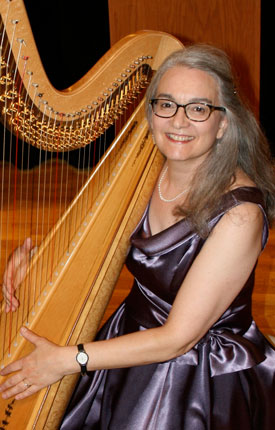