Fred Ormand, clarinet, retired in 2007 from the School of Music, Theatre & Dance after 23 years on the faculty.  As a performer he has played with the Chicago, Cleveland, and Detroit symphony orchestras and has performed as soloist with orchestras in the United States, China, and Europe. He founded and has toured extensively with the Interlochen Arts Quintet and the Dusha Quartet. Formerly a faculty member at several leading American universities, he was visiting professor at the Shanghai Conservatory in 1988. In 1995 he presented master classes in England, Denmark, and Sweden.

Since 1989 he has been a member of the summer faculty at the Music Academy of the West. From 1990 to 1992, Mr. Ormand served as president of the International Clarinet Association (ICA) and is often invited to perform at the international conferences of this group. In 2008, he was presented an Honorary Membership by the ICA for his lifetime achievements in performance, teaching, and service.

Ormand has published editions of the music for winds of Amilcare Ponchielli. In 1996, he released a CD on DANACORD Records titled Il Convegno, a premiere recording of Ponchielli’s solo works for winds. Additional recordings with soprano Julia Broxholm and collaborative pianist Martin Katz include Of Shepherds, Romance, and Love and Transients. 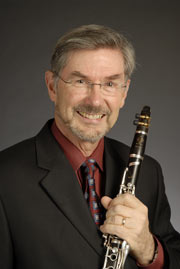