Chair of Conducting and Arthur F. Thurnau Professor of Music

Ellen Rowe, a jazz pianist and composer, is currently professor of jazz and contemporary improvisation at the University of Michigan. She is a graduate of the Eastman School of Music, where she studied with Rayburn Wright and Bill Dobbins. Prior to her appointment in Michigan, she served as director of jazz studies at the University of Connecticut.

Winner of the Hartford, CT Advocate readers’ poll for “Best Acoustic Jazz,” Rowe has performed at jazz clubs and on concert series throughout the U.S., as well as touring in Germany, Holland, Switzerland, Ireland, Poland, and Australia. Her CDs as a leader include Sylvan Way (2001), Denali Pass (2005), Wishing Well (2010), and most recently, Courage Music (2014) all on PKO records. Also active as a clinician, she has given workshops and master classes internationally at the Melbourne Conservatory, Hochschule fur Musik in Cologne, Royal Academy of Music in London, Wits University in Johannesburg, Rhodes University in Grahamstown, S.A. Grieg Academy in Bergen, and HEMU in Lausanne. Master classes and residencies in the United States include the Eastman School of Music, University of Wyoming, University of Wisconsin, Western Michigan, and the University of Kentucky as well as many high schools including New Trier, LaVilla School for the Arts, and Community High School.

When not leading her own trio or quintet she is in demand as a sideman, having performed with a wide variety of jazz artists including Kenny Wheeler, Tim Ries, Tom Harrell, John Clayton, Ingrid Jensen, Frank Morgan, and Steve Turre. She was also a guest on two installments of Marian McPartland’s Piano Jazz on National Public Radio.

Having been selected to conduct the MENC All-Eastern and All-Northwest Jazz Ensembles as well as All-State jazz ensembles throughout the country, Rowe has also been an invited clinician at the Music Educators National Conference Eastern Division Convention, International Association of Jazz Educators, Jazz Education Network Conference, and many state music education conferences. Her quintet has performed at clubs and concert halls around the country as well as at the 2008 and 2013 Detroit International Jazz Festival and the 2012 Jazz Education Network Conference. 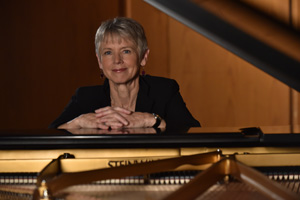