Bright Sheng is a composer, conductor, and pianist. In April of 1999, he received a special commission from the White House to create a new work for a state dinner, hosted by the president, honoring the Chinese Premiere Zhou Rongji. In October 2001, Sheng was named a MacArthur Fellow. He was also invited to compose music for the opening ceremony for the 2008 Beijing Olympic Games.

In addition to many national and international awards, Sheng has received fellowships and awards from the National Endowment for the Arts, American Academy and Institute of Arts and Letters, Guggenheim Foundation, Rockefeller Foundation, Naumberg Foundation, Copland Foundation, Michigan Arts Award, and a Rackham fellowship and a fellowship from the Institute for the Humanities from the University of Michigan.

He is married to Pam Sophie Chen and lives with their daughter Fayfay between Ann Arbor and Manhattan. 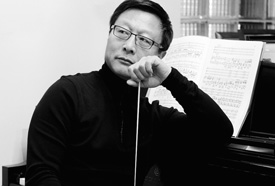