Born in Taiwan, pianist Amy I-Lin Cheng has appeared on concert stages in the United States, Germany, Switzerland, Denmark, Taiwan, Brazil, Canada, France, and Israel. She has been described by the New York Concert Review as a pianist whose “control of the keyboard is complete, technique easy and relaxed, with a wide range of touch.”  Late pianist Claude Frank described her as “a brilliant, sensitive, imaginative and most beguiling pianist.” Amy’s performances have been heard on WGBH, KCSC, WHYY, La Radio Suisse Romande-Espace 2, WFMT, and NPR. Amy has presented recitals at venues such as the Isabella Stewart Gardner Museum, Merkin Concert Hall in New York City, Weill Recital Hall in Carnegie Hall, and National Concert Hall in Taipei, as well as on concert series across the United States. Amy made her Boston concerto debut at the age of 17 in Jordan Hall under the direction of Benjamin Zander. Since then, she has appeared as a concerto soloist with the ‘Musica Viva’ Moscow Chamber Orchestra, Taichung Philharmonic, Orchestra of the Pines in Texas, University Symphony Orchestra (University of Michigan), and the Oklahoma City Philharmonic, among others. In 2015, she gave the North American premiere of the Kaprálová Piano Concerto at the Hill Auditorium in Ann Arbor as part of the week-long Kaprálová Festival, hosted by the University of Michigan’s School of Music, Theatre & Dance.  In Summer 2017, she gave the US premiere of Improvisation on Misirlou, a single-movement piano concerto by Israeli-American composer Daniel Rein, with the Sewanee Symphony Orchestra during the Sewanee Summer Music Festival. In 2019, she gave the world premiere of the Double Concerto for YangQin and Piano by Taiwanese composer Chun-Da Huang, collaborating with the National Chinese Orchestra Taiwan (NCO), at the University of Michigan, Ann Arbor. Her recording of the Kaprálová piano concert was released in Summer 2021 on Naxos, with outstanding reviews. Her recent video recordings include solo piano works by French composer Fernande Decruck, released on the Éditions Billaudot’s youtube channel in fall 2022.

A dedicated chamber musician, Amy enjoys collaborating with others from a very young age. Amy is the co-Artistic Director of the Brightmusic Society of Oklahoma in Oklahoma City, a non-profit organization commissioning and presenting chamber music concerts since 2003. Formed in 1999, Duo Clarion (with clarinetist Chad Burrow) has performed in venues such as Zankel Hall in Carnegie Hall and National Concert Hall in Taipei, as well as venues across the US and Asia. Duo Clarion has released recordings through CDBaby, Albany, and WeiStudio. Duo Clarion’s recording of music by Brahms and Schumann received an outstanding review in the ICA publication. Violinist Sean Yung-Hsiang Wang joined the duo to form Trio Solari in 2006. Trio Solari released its debut CD through Centaur Record in 2016. Trio Solari has commissioned and performed trios by Edward Knight and Joseph Tyldesley. Amy has toured as a guest pianist with the American Chamber Players, and America’s Dream Chamber Artists, and performs frequently on the Detroit Chamber Wind and Strings concert series and Michigan Chamber Players Series at the University of Michigan. Amy has been part of many commissioning and premiering initiatives and has recorded chamber music works by composers such as Edward Knight, Laura Schwendinger, Stephen Rush, and Adolphus Hailstork on Centaur, Albany, and the Block M Record. Most recently she gave the world premiere of The Plus One (2022) for Two Pianos by Jorge Variego with pianist Stephen Beck at the 2022 Sewanee Summer Music Festival.

Amy enjoys a career in teaching and has given piano and chamber music masterclasses across the USA, Brazil, Taiwan, and Germany for both college and pre-college students. Her university students have been awarded top prizes in MTNA competitions (Chamber Music), solo and concerto competitions, scholarships to graduate programs, and summer festival programs, and many of her former students hold college appointments in the US and abroad. Committed to piano education of the younger generation, Amy devotes her time to instructing young pianists. She has worked with young pianists and youth chamber music groups in summer festivals, at the Franklin School for the Performing Arts Massachusetts, and at the Community Music School of Ann Arbor. Currently, she maintains a small studio of private students in Ann Arbor.

A graduate of The Curtis Institute of Music (BM), Yale University School of Music (MM and Artist Diploma), and the New England Conservatory (DMA), Amy holds degrees in Piano Performance. Her principal teachers were Claude Frank, Wha-Kyung Byun, Rolf-Peter Wille, and Yi-Hsien Chang. She studied chamber music with Robert McDonald, Peter Frankl, Michael Friedmann, and Boris Berman. Prior to moving to Ann Arbor, Amy was the Head of the Piano Area at Oklahoma City University Wanda L. Bass School (06-09), and the Assistant Professor of Piano at Oklahoma State University (02-06). After serving as a collaborative pianist for the School of Music, Theatre & Dance at the University of Michigan for two seasons, Amy joined the Piano Department faculty in 2012 as a Lecturer in Piano where she teaches studio piano and coaches chamber music. Since fall 2022, she continues her college teaching career as an Assistant Professor of Music – Piano and Piano Chamber Music Coordinator. In the summer, Amy is on faculty at the Sewanee Music Center. Amy lives in Ann Arbor with her husband Chad Burrow, two children, and a family dog. 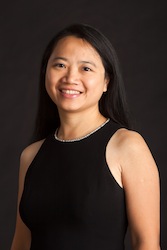