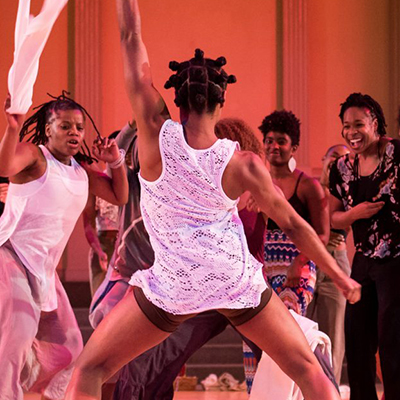 Exploring Social Justice Through Movement in Ann Arbor and Detroit

A multifaceted initiative, launched by the Department of Dance this winter, is forging alliances in Detroit while exploring the ways that dance can imagine and realize a more equitable society.

Featuring performances, workshops, an artist-in-residence program, and student fellowships, Daring Dances was created and curated by Clare Croft, associate professor of dance and American culture. In developing the project, Croft built upon her 2017 curatorial work on “EXPLODE! Queer Dance Festival,” which explored relationships among dance and politics, gender, race, and sexuality. That project began in Ann Arbor, toured to New York, and will tour nationally later this year.

A dance scholar with a focus on 20th- and 21st-century American dance, Croft wanted to continue to curate themed dance events, and was also motivated by the desire to get dance students to connect with, understand, and be more involved in the Southeast Michigan community and its arts landscape.

“Our students are often on the frontlines of gentrification in the communities in which they settle after graduation,” said Croft. “I want them to truly consider the places where they live – who’s making art there now, who has lived there before? How does knowing where you live help you to be a more ethical neighbor? We need to introduce these ideas to students while they are in school so they will practice them when they move on. At the same time, this project is creating a community infrastructure for our students.”

The Daring Dances initiative, with one year of planning and three years of implementation supported by the University, offers a platform for presenting dance work that invites “difficult, but necessary conversations” and encourages community engagement. The first season focuses on issues of race and feminism; over the next two years, Croft hopes to explore issues related to Arab Americans, and will also look at questions of consent.

“I think dance offers us languages and strategies for trying to understand really complex problems, and the opportunity to try to understand them from where we live,” said Croft. “These aren’t just issues that are out in the world – they are affecting lives in Southeast Michigan, too.”

This geographic area, then, is the anchor for the program as it seeks to support emerging new work by choreographers based in the Midwest. It is also encouraging U-M students to make dance related to social justice, and conduct “Experiments in Coalition” – the community engagement aspect of the project – with the aim of bringing communities together around dance making and viewing. 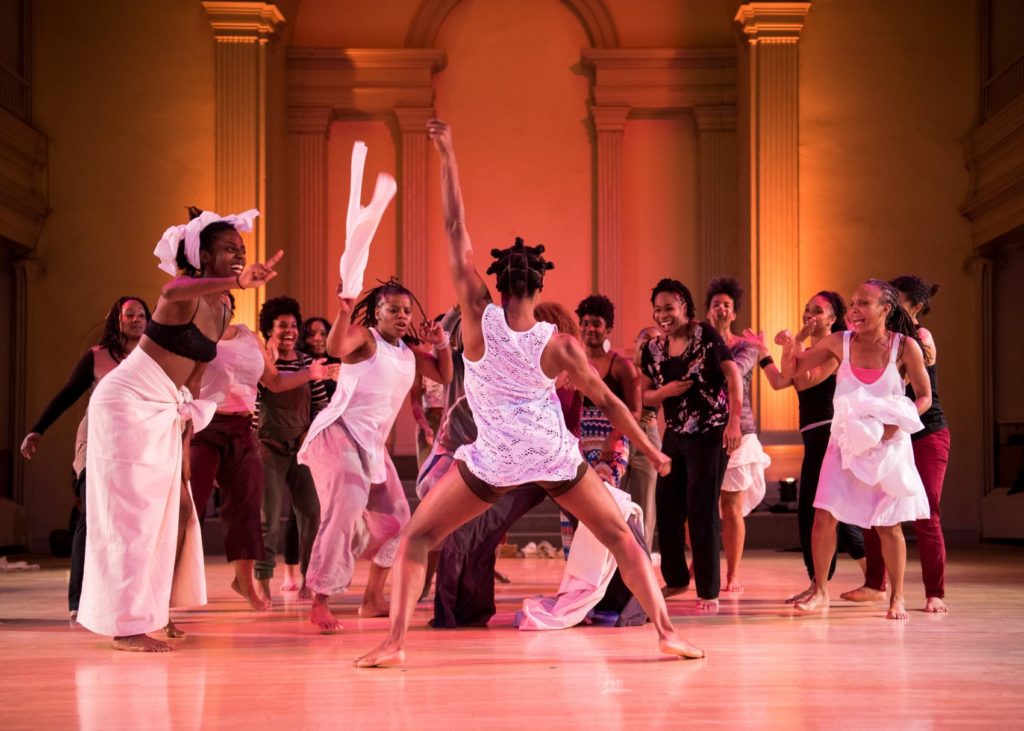 Skeleton Architecture at a performance in New York

Filling the “Experiments in Coalition Winter Residency” was New York City-based Skeleton Architecture, a Bessie Award-winning collective that describes itself as “black womyn and gender-nonconforming artists rooted in the rigor and power of the collective in practice and improvisation.” Five artists from the group kicked off the residency with a free public workshop at U-M’s Alice Lloyd Hall titled “Listening on the Pleasure Boundary,” exploring the intersections of race, gender, and sexuality in dance.

Skeleton Architecture then reunited with The Gathering, an intergenerational collective of black women-identified dance artists in Detroit, assembled by SMTD alumna Jennifer Harge, BFA ’08. The two groups had partnered last fall
for a week-long residency that included working with student activists at U-M and artists in Detroit. The public showing in March, “Choreographing Black Space,” was the culmination of collective investigations explored during the residency. Harge described it as “working through questions and strategies to create future worlds by attending to emergent tools that surface when existing and dancing together.” 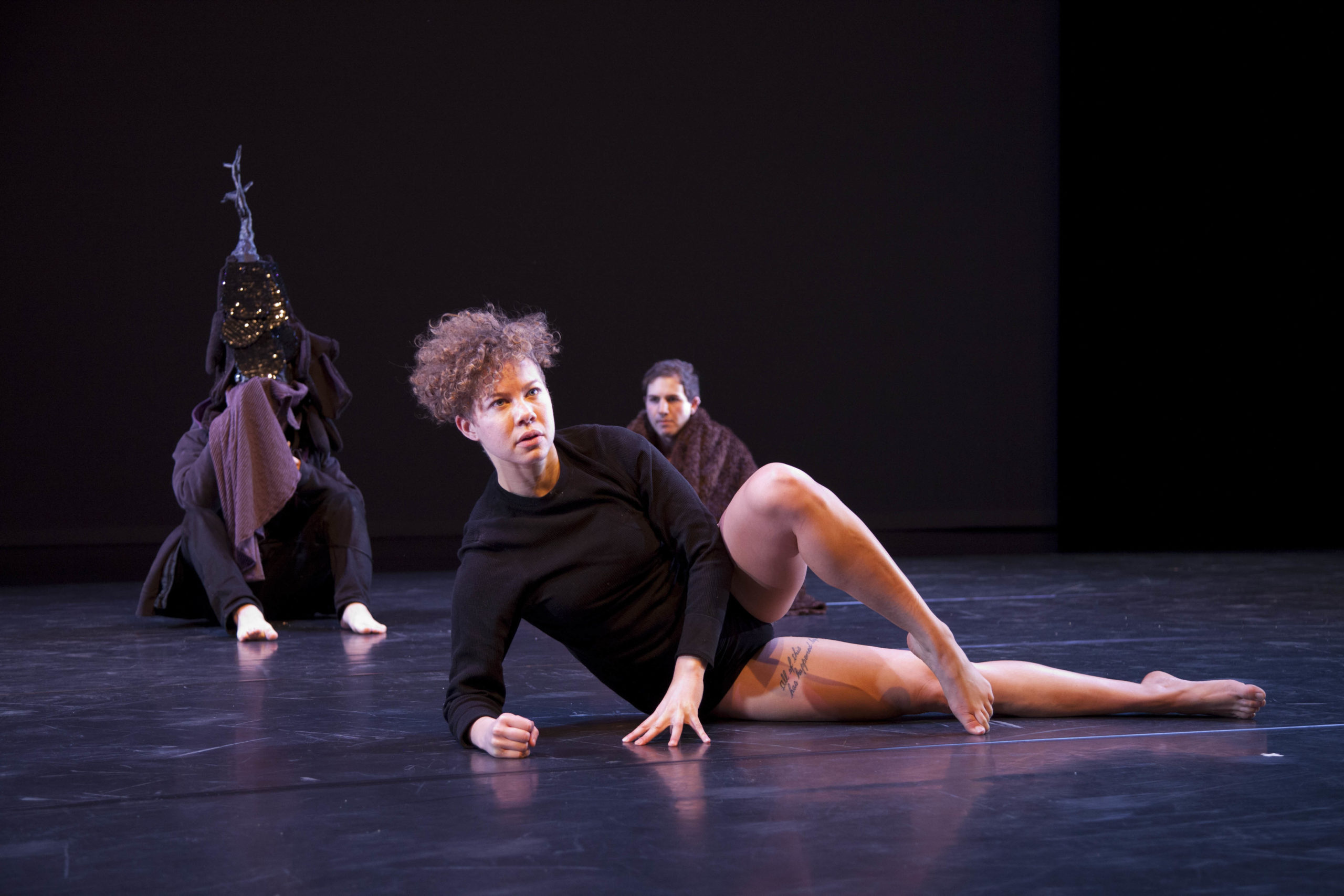 Daring Dances also appointed an inaugural artist-in-residence, Chicago-based choreographer Anna Martine Whitehead and her collaborator Damon Locks, a sound artist. That two-part residency began in Ann Arbor in Summer 2018 and concluded in Detroit in Winter 2019 with three events at the Jam Handy, a Detroit venue with a rich history and raw industrial ambience.

The culmination of the week-long winter residency was a soft premiere of Notes on Territory, a performance work that uses “the prison as a prism to consider architecture, surveillance, and freedom.” The work uses video, sound installation, text, and language-play, in addition to set choreography and improvised movement, as it makes connections between Gothic cathedrals, colonial fortresses, American public housing, and prisons.

In addition to the performance, Whitehead created the installation “Freedom Futures Lab,” an open space for collectively imagining a world without prisons, and led the workshop, “How Can Dance Help Imagine a Just City?” Both were organized in collaboration with the Detroit Justice Center, a nonprofit law firm working alongside communities to create economic opportunities, transform the justice system, and promote equitable and just cities.

Whitehead and Locks also spent two days in Ann Arbor, where they performed an excerpt of Notes on Territory, visited with students in Croft’s “Dancing Women/Dancing Queer” course, and led a workshop on dance and social justice for the Daring Dances Student Fellows.

The Fellows represent the third prong of the Daring Dances initiative, along with performance and community engagement. Open to current undergraduate and graduate students, the Fellowship grants are intended to support students and student organizations interested in both dance and social justice and to provide financial support and community-based mentorship.

“The student fellowships were really inspired by the desire to connect SMTD students with the thousands of U-M students who dance regularly in extracurricular dance clubs on campus,” said Croft. “We wanted to bring dance and social justice issues together across the arbitrary dividing line that sometimes gets drawn between the students who major in dance and those who dance regularly on campus, but major in other areas. Many of those exploring dance outside the department are working in forms not offered in the current dance curriculum, so bringing the various groups together helps us experience a richer picture of the full spectrum of dance practices. ”

The first cohort of Fellows includes: Regained: Healing Through Dance, led by dance majors Shannon Nulf and Victoria Briones, who are committed to using dance as both a method of resistance and a means to uplift the stories and healing of marginalized groups; Amala Dancers, a group that creates a collective dance space for all students of African descent to engage in a cultural sharing between the African diaspora and the African continent; and South Asian Awareness Network (SAAN), which focuses on the concerns, needs, and traditions of the South Asian community and explores social justice concerns using the arts, poetry, music, storytelling, and Bharatanatyam (classical Indian dance) as its catalyst.

In using dance as a means of exploring issues of social justice and/or heritage, each of these groups is ultimately seeking to eradicate boundaries and unite people – a primary goal of Daring Dances.

“I’m always intrigued by the power of performance to bring people together,” said Croft. “Even if two audience members have nothing in common, once they’ve watched a performance together, they have that in common. I don’t want to erase difference – our differences are important and very real. But I do want us to have shared experiences that allow us to talk about how we are different and why that matters. Those are conversations that we need to have, and I know that dance – both watching it and making it – can help us have them.”