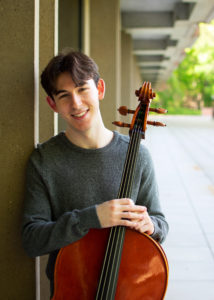 Cellist Alon Hayut (BM ’23) has been named the winner of the 2022 Presser Undergraduate Scholar Award at the School of Music, Theatre & Dance (SMTD). Established by the trustees of the Presser Foundation, this award is given annually to undergraduate students at participating music schools throughout the United States. The winner is selected by each school’s faculty and is honored for a high level of musical and academic accomplishment as well as leadership and citizenship. Hayut, who studies with Professor Richard Aaron, will be awarded a $4,000 prize to advance his musical studies.

“I feel extremely honored to be this year’s Presser Scholar Award winner and am excited for the opportunities this award will enable me to pursue,” said Hayut. “These past three years feel even more rewarding as I continue to work hard toward my cello studies and career goals.”

Originally from New Jersey, Hayut moved to Ann Arbor in 2014, when he began his studies with Horacio Contreras (DMA ’16, cello) through the String Preparatory Academy and later at the Music Institute of Chicago Academy. He began formally studying with Aaron when he chose to attend SMTD for his undergraduate studies.

In the second semester of his freshman year, Hayut was acting principal of the University Philharmonia Orchestra, and since then he has played in the University Symphony Orchestra. In addition to being a Presser Scholar, Hayut has also been named a James B. Angell Scholar throughout his time at Michigan.

“Alon is a remarkable student at SMTD,” said Aaron. “He is a stellar cellist and a thoughtful, scholarly student. He brings to our school a wonderful energy in chamber music and solo performances. It is so fitting that our school awards Alon this prestigious Presser Award.”

During the summer of 2021, Hayut was invited to the Aspen Music Festival and School as a fellowship recipient, where he continued his studies with Aaron. “Studying with Professor Aaron has been an immense privilege,” Hayut noted. “In each lesson, I am always pushed hard, encouraged, and inspired to be the best cellist I can be while enjoying many laughs along the way. Professor Aaron’s teaching also reaches far beyond the technique and the music. I will always be grateful for his support and for the growth I have made while studying with him.”