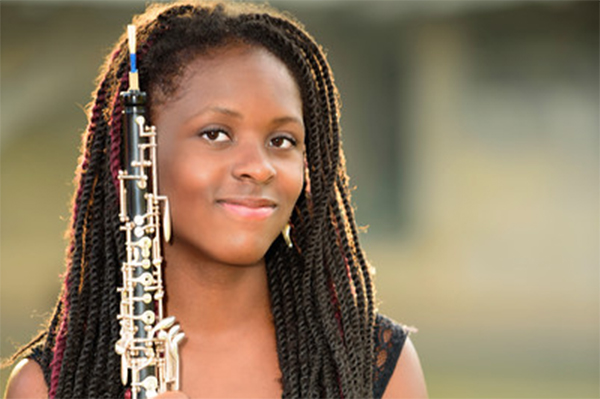 SMTD is pleased to share this feature article written by student Mattie Levy, BM ‘22 (oboe performance), as part of our celebration of Women’s History Month. 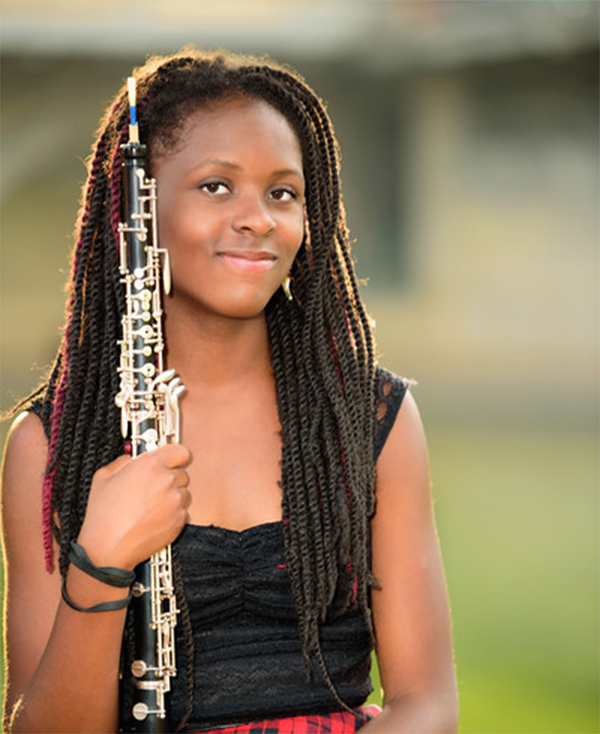 My life as an oboist has been hallmarked by the celebration of white men. In middle school, it was a white man who was leading the band. In solo and ensemble, it was a white man who scored me. In district and state musical competitions and festivals, I played for white male adjudicators. I played solos under white male conductors. I studied, learned, and performed music by white composers. Despite all of this, there were moments where my career was influenced by women. My first private oboe lesson teacher, Lisa Larsen was a woman and a talented musician. My current oboe professor, Dr. Nancy Ambrose King, is an incredible teacher and an empowering inspiration. In my lessons with both of them, I was able to talk about not just oboe performance but my life outside of it and what it means to be a woman with a career in the arts.

These experiences got me thinking about what other women in the arts are doing, and since March is Women’s History Month, I wanted to recognize some of the women in the SMTD community making history. I interviewed faculty members Dr. Louise Toppin, Professor of Music, Voice; Dr. Christi Anne Castro, Associate Professor and Chair of Musicology; Dr. Fangfei Miao, Assistant Professor of Dance; and Dr. Courtney Snyder, Associate Director of Bands and Associate Professor of Music, in an effort to showcase their thoughts on uplifting women’s history, and learn about their hopes for the future of the performing arts.

While I am not a voice student, I have worked with Dr. Toppin before. She recently participated in The Future of Blackness in the Arts, a panel discussion hosted by Black Leaders in Art Collective, an organization I co-founded that works to provide a safe-space for Black students in SMTD and the Stamps School of Art and Design. Dr. Toppin, in addition to being a Professor of Voice at SMTD, also is director of Videmus which she says was “created with a vision to bring to light the compositions created by women, African American, and under-represented composers through concerts, lectures, educational programming, and recordings.” When asked about the reason why uplifting women’s history is important, Dr. Toppin emphasized the importance of bringing marginalized voices to the table. In regards to this topic, she said:

“Uplifting the history of women, African Americans, and any marginalized group is important as it helps us understand fully the American story,” said Dr. Toppin. “Without acknowledging the contributions of all of us, we are only telling and understanding a part of our shared American experience.”

Dr. Fangfei Miao is a dance professor who I probably wouldn’t have met if it weren’t for this project. Her research centers around dance and performance studies, transnational corporeal politics, and Chinese arts and culture. Like Dr. Toppin, she also believes in the importance of uplifting marginalized voices, and she talked about how her own story contributes to that effort.

“I am the first, and currently the only, dancer from the People’s Republic of China who has received a Ph.D. in critical dance studies in the U.S.,” said Dr. Miao “I hope my personal story contributes to uplifting women in our history, especially in troubling stereotypes about Asian women that still prevail in society.”

Not only did I explore the importance of uplifting women’s history, but I also asked about how Dr. Castro, Dr. Snyder, and Dr. Miao uplift women in their own careers. Dr. Castro, who I have known since my freshman year here at U-M, is a musicology professor whose research interests include identity and cultural politics, nationalism, and embodiment. I’m taking a class with her now titled “Music in Everyday Life” where we examine the ways in which music affects our work, political movements, identity, and more. Dr. Castro works to uplift women within her career through her curriculum and teaching style. Of this work, she said:

“My job has included learning where we have failed women in the past and addressing those inequities vigilantly in my own professional spaces. In not trying to conform to an imagined ideal faculty person with only qualities traditionally coded as masculine, I can also show that qualities some might code as feminine are necessary and effective in professional life. People of all genders and with different self-presentations and personalities can lead, teach, and mentor without having to perform according to one model. For the past several years, I have quite enjoyed teaching a Music, Gender, and Sexuality course with ethnomusicological perspectives. To promote women is not to teach only about women, but instead to teach about larger structures of thought and power that maintain gender inequities. Further, I try to include these topics in all the courses I teach.”

Like Dr. Castro, Dr. Snyder has also proved to be a role model by uplifting women in her work. I’ve also known her since my freshman year when I joined Concert Band, which she directs. Concert Band is where I had my first long-term experience with a woman conductor. A conductor on a podium is a symbol of authority and unparalleled artistry, and to see a woman on the podium was inspiring to me because before that time, I had only seen men occupy that space. Dr. Snyder stands out as a leader in the SMTD community by not only directing many ensembles throughout her career, including the “Maverick” Marching Band and the Nebraska Wind Symphony, at the University of Nebraska-Omaha but also by her leadership as president of Women Band Leaders International.

In my conversation with Dr. Snyder, she discusses how she works to program both women and BIPOC composers when white men typically dominate the concert sphere. Of these efforts, she said:

“In my second year at U-M, I made a goal to program a composition by a woman for every concert. That grew in the following year to include BIPOC composers. The most meaningful project I embarked on here at U-M was organizing the ‘Let Women Choose Her Sphere’ concert to celebrate the centennial of the ratification of the 19th Amendment This concert was less than one week out when the university shut down because of Covid-19. Through organizing this concert, I worked with truly amazing women scholars and artists throughout the university. In all, 12 female faculty and staff and 12 students joined me to be a part of the planning and performance of this concert in addition to the students in the Concert Band. I look forward to the day when we can finally put this concert on the stage and bring it to the public!”

Dr. Miao, in addition to expressing how her own story emphasizes the importance of women’s history, also described how her current projects are working to uplift women, and shatter stereotypes. She said:

“In my recent solo work Across, which will be featured in the Power Center Dance Concert recorded this March, I take a semi-autobiographical approach to play with the gaze and expectations of my audiences. Across integrates spoken words, dance movements, and Chinese culturally symbolic props to explore the conversation between ancient Chinese art philosophies and postmodern avant-garde concepts. In doing so, I aim to interrogate the politics of reading a gendered and racialized body, that a female Chinese dancing body is capable of self-representation and speaking intellectually, instead of being entertaining, exotic, sexy, and laborious.”

After discussing the importance of uplifting women’s history, and learning about how each of these women work to uplift women in their careers, I wanted to hear their thoughts on intersectional feminism, and what their hopes were for the future of the arts.

In regards to this subject, Dr. Castro pointed out the importance of celebrating difference in the arts. She said:

“If scholars and artists commit at least some part of their time to educating the public through and about the arts, we can put social justice ideals into practice. We can help people to imagine a better world through our art and our teaching and perhaps even point to a way forward. As so many others have pointed out, people that identify as women are not a homogenous group. The concerns of individuals with diverse backgrounds and life experiences cannot easily be addressed when we imagine that one solution based only on gender identity fits all. Celebrating difference is better than ‘tolerating’ difference, but equity and inclusion despite difference is even better than both.”

Dr. Toppin also highlighted the importance of amplifying the voices of people in diverse communities. She said:

“I am hopeful that we are moving toward an arts profession that finds the narratives and compositions of women and diverse communities a necessary part of a university curriculum and professional performance. My dream is that the voices of all of us are valued and celebrated equally.”

Dr. Snyder pointed out that both the people performing music in the arts and the music itself needs to embrace diversity. She said:

“In my research to prepare for the ‘Let Woman Choose Her Sphere’ concert I came to realize just how much truth women, in particular women who experience intersectional inequality (inequality experienced in more than one form such as race, gender identity, sexual preference, and ability) have been speaking for decades. Their perspective is essential. Their words can no longer be silenced, they should ring loud for all to hear and heed. I don’t see how music in the academy will survive if it doesn’t embrace diversity and inclusivity not just of the performers–which is an absolute necessity–but of the music itself.”

All four professors are doing the work to change the future, and I look forward to a day where every area and every person in the performing arts works to be inclusive. Even though my experience as an oboist has primarily been punctuated by the celebration of white men, I hope that by showcasing women and their stories I can work to change that narrative. I hope that in my own work, as an oboist, composer, and writer, I can work to amplify women’s voices, especially those of BIPOC women and create a path toward a world where all young artists and creatives can see their faces in the arts they engage in.

Mattie Levy is a writer, poet, oboist, and composer. At the University of Michigan she is in her third year, pursuing a BM in Oboe Performance and a minor in Creative Writing. Mattie also works as a Diversity Peer Educator for Michigan Housing, a Student Assistant for the SMTD Office of Diversity, Equity, and Inclusion, and as a contributor to the column arts, ink. where she publishes poetry weekly. She is also the co-founder and vice president of Black Leaders in Art Collective, an organization that works to support Black students in the School of Music, Theatre, & Dance by providing a safe-space along with performance and collaborative opportunities.

Outside of her work and extracurriculars, she recently recorded and mixed a song titled “Fireflies.” Mattie is currently working on the manuscript for her poetry book titled Lost Thoughts and is writing a musical. You can connect with Mattie by subscribing to her YouTube channel @Mattie Levy or following her on Instagram @mattie_tvc15.