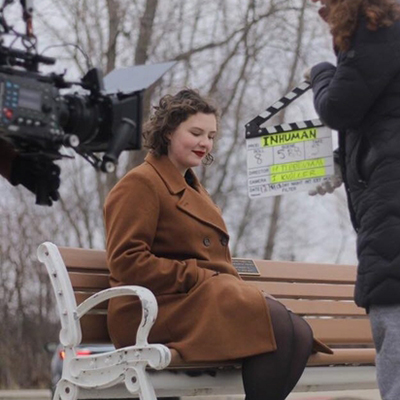 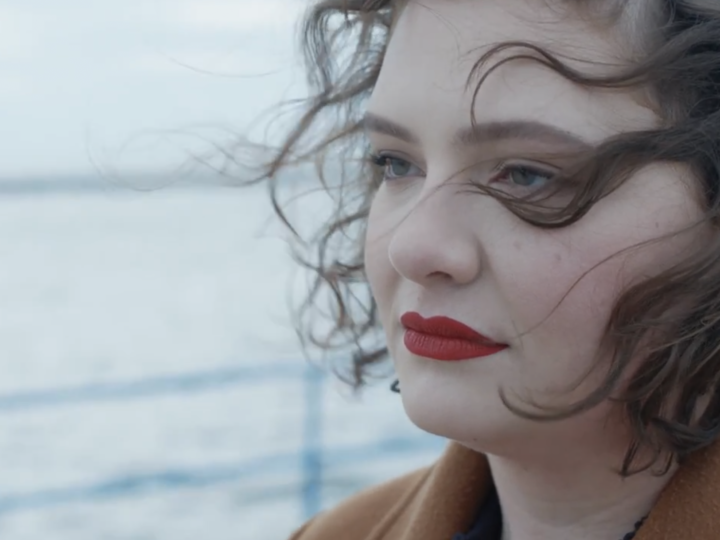 Hayley Tibbenham as Alice in “Inhuman.” Photo by director of photography Joshua Knoller.

A debut film by SMTD voice student Hayley Tibbenham was invited to be part of the upcoming 2019 Cannes Film Festival Short Film Corner.

Last spring in a creative writing course at the U-M, Tibbenham began writing a scene that would become the beginnings of a short film. After creating one scene for class, her creative writing professor, Jamien Delp, connected her with filmmakers from Interlochen Center for the Arts who advised in the process of creating a short film.

“When I was writing this, I had not taken a single screenwriting class prior, but I was fascinated by filmmaking,” says Tibbenham, a rising senior. “As a person who doesn’t really see themselves represented in a way that is complex or meaningful, in lots of different art forms – and especially in film – I was inspired to turn my scene into a short.”

According to Tibbenham, “Inhuman” is about a a plus-sized woman named Alice who moves to a small town in northern Michigan. She appears to be a jaded, seemingly insecure teenage girl, but her budding romance with Elliot, a sunny high school golden boy, leads to the discovery that she is not some washed-out stereotype – she is actually just a vampire.

“The film asks a lot of questions and leaves people hanging,” she said. “I definitely think it starts a conversation about the assumptions we make in our daily lives, as well as attempts to redefine the genres we think of as ‘feminine.’”

After spending the summer of 2018 writing the script, Tibbenham sent it to some friends and started preparing the short for production last fall. Shooting began in December 2018 in various locations on campus, such as Mason Hall and the Art and Architecture building. Other scenes were shot in Holland, MI. 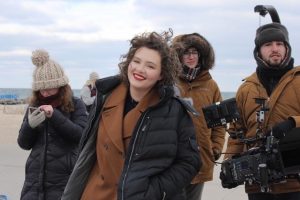 Tibbenham and her team take a moment to relax and celebrate after an afternoon of filming in sub-zero temperatures off the coast of Lake Michigan. Pictured (from left to right): first assistant director Charlotte Beggs, writer and lead actress Hayley Tibbenham, second assistant director Mitchell Salley, and director of photography Joshua Knoller. Photo by producer Lauren Guido.

In total, between 25-30 student actors and actresses, filmmakers, producers, and designers were involved. Students from the musical theatre and voice departments in SMTD took on acting roles, while student filmmakers from the Film, Television, and Media department in the College of Literature, Science and the Arts were tapped to produce the short.

Genres Tibbenham loved while growing up helped shaped the film – from John Hughes’ rom-coms and soapy television dramas to gothic vampire lore. She cites being inspired by female writers in film and TV, including Shonda Rhimes, Mindy Kaling, Phoebe Waller-Bridge, and Issa Rae.

“I’m inspired by female writers who create interesting, complex, flawed women not typically seen, as well as women who are able to be both in front of and behind the camera,” says Tibbenham.

Not only is Tibbenham the writer and director of the short, but she also plays the lead actress, Alice.

“As I was writing it, I was seeing myself as Alice. It felt a little bit selfish, but it also felt powerful seeing a part of myself represented on screen,” says Tibbenham.

While Tibbenham is a voice major, she reckons that a musical background has only helped her experience as a filmmaker.

“Music is a huge part of a film. Being able to sit down with my composer, Brad Gurwin, and really be able to communicate with him under a common language we both understood as musicians was super beneficial,” she added. 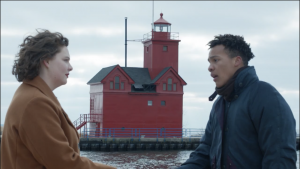 Hayley Tibbenham (Alice) and Mason Reeves (Elliot), a rising senior in the Department of Musical Theatre, in the final scene of Inhuman. This portion of the film was shot in December of 2018 on the beach of the Holland State Park in Holland, Michigan. Prominent in the scene is Holland’s iconic “Big Red” lighthouse. Photo by Joshua Knoller.

The Short Film Corner at Cannes Film Festival was a particular goal for Tibbenham, not only because the date lined up the end of the film’s editing process, but also because it’s particularly geared towards young, first-time filmmakers. Tibbenham, who plans to attend the festival, says that the invitation will present networking opportunities with notable filmmakers, producers and distributors, as well as provide visibility in the industry.

“It’s really exciting to be invited,” remarks Tibbenham. “It’s one of the biggest, oldest, most renowned festivals in the world. It’s sort of like a gold standard in the film industry.”

Tibbenham received support through grants, including a grant from SMTD’s EXCEL Lab, Arts at Michigan, and donations through a GoFundMe she set up herself. The biggest factor for her, though, was finding a community of support through the university.

“A huge part of this was being able to have support from my fellow students,” she said. “If you want to do something at this university, the people and opportunities are there – you just need to take advantage of them. There are so many resources.”

As for her future in filmmaking, Tibbenham hopes to continue combining her love for performing and writing.

“It’s so incredibly exciting and there are so many unique opportunities to be in front of and behind the camera – who knows, maybe I’ll do a musical next,” she said.

“Inhuman” is currently being submitted to film festivals across the U.S. and abroad. The short is invited to the Cannes Film Festival Short Film Corner, which will take place May 20-25.