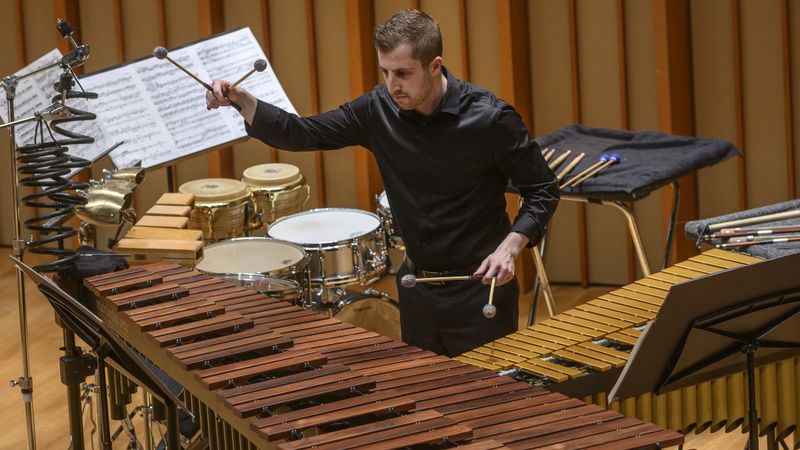 Jeff Grant (MM ’12, percussion) saved the day for French new music ensemble TM+ on Friday, May 3, stepping in at the last minute to perform William Kraft’s Concerto for Percussion and Chamber Ensemble.

TM+ was scheduled to take part in Los Angeles’ Hear Now Music Festival for new music by LA composers, but their percussionist was unable to obtain a visa. Grant learned the incredibly difficult piece in just four days and earned rave reviews. “[Grant] was terrific hitting mallets and drums and junkyard automobile springs deconstructing a Revolutionary War tune… A career awaits,” wrote Mark Swed in his review for the Los Angeles Times.

After leaving SMTD, Grant earned a graduate certificate from the University of Southern California, studying with the principal timpanist of the Los Angeles Philharmonic, Joseph Pereira. TM+ performed Pereira’s “Glimpse” during the same concert, and he was the one who recommended Grant for Kraft’s concerto.

Grant, an Ann Arbor native, is a freelance percussionist based in LA. He regularly performs with the Los Angeles Philharmonic and other orchestras, and serves as the percussion instructor for the Esperanza Azteca Youth Orchestra of Los Angeles, which provides free music education to children in the Cypress Park community.

Photo by Nick Agro for the Los Angeles Times