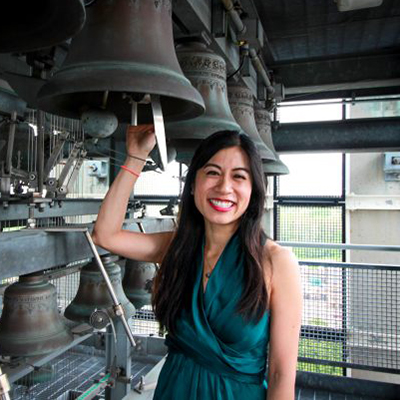 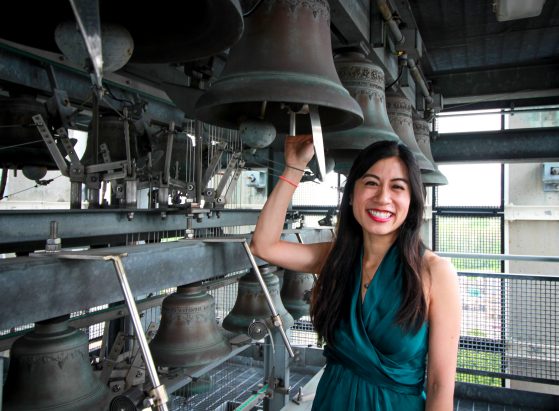 What is the role of the arts in creating social change? According to Tiffany Ng, an assistant professor of carillon and university carillonist at the University of Michigan, artists have all different roles. She has found that the most productive and satisfying role is that of the social impact artist – someone whose artistic practice and choice of repertoire aims to actually change society for the better. Social impact artists look for ways to change the world and then encourage a little bit of that change through the arts.

I caught up with Ng to talk about her scholarship and artistic endeavors. This interview has been edited for clarity and length.

Describe your scholarship and artistic endeavors.

My PhD is actually in a scholarly discipline: musicology and new media studies. So, it’s an unusual path, then, to become a practitioner of the arts instead.

From a scholarly perspective, I work towards questioning the discourses that have gotten the carillon built throughout the 20th and 21st centuries. There are all these very utopian ideas or such conversations about the carillon providing music for everybody – “it’s for the everyman on the street, it’ll be so edifying for people to listen to classical music all the time.” Whatever the utopians mythologies are, people used to build carillons in particular communities.

It’s useful now to look back and ask, who was it serving? Was it serving the institution? Was it serving the people? And how it did go about accomplishing the institution’s goals if that was what was going on. And once you develop that kind of understanding of the history of carillon building, then you can look at your own institution. Who does the carillon serve on this campus, then? At this university, we have so many different people that come together, so playing traditional carillon repertoire that assumes a Western European Christian audience leaves out so many people, through the symbol of our university.

My job is to question that, even though it seems threatening to my own profession, right? To question the basis of why you should build a carillon in the first place. But I think it’s necessary for us to survive because carillons were built in churches that were in very homogenous communities at some point.

That’s really important for me because I want to make sure that, in my daily performances, that I’m not just reproducing power structures, for example, but also undermining them to bring in more voices who have been marginalized traditionally in carillon repertoire.

In your practice, how do you disrupt the canon or common repertoire?

It took awhile for me to figure out some strategies to disrupt the canon. Initially, I mostly relied on the published repertoire. One of my responsibilities as the University’s carillonist is to give a daily concert at noon.

It’s the fact that I was playing so much every day during my first year, with all that music stacking up – stacks of paper several feet tall – I would look on what I had played over the past year and realize that mostly white male composers are represented here. I finally had the wake up moment that my music really does just represent one or two identities.

I’d never thought about it very much before. It was really quite invisible to me before that I was playing almost all male composers. That I was playing almost all white composers. Most carillon appointments do not require daily concerts. When you play a special concert maybe once a month like many of my colleagues, you don’t notice as much. But when you’re playing every day, you really do start to become cognizant of being the mouthpiece of maybe just one segment of the population.

It’s due to the really unusual nature of this job that I started then to become more cognizant of looking for voices that were missing, and started asking for a lot of Jewish repertoire, for example, East Asian repertoire, Latinx repertoire, more compositions by women. Part of that was just digging deeper into the library and also working with our librarian to purchase more diverse music. But the other half of that has really just been commissioning composers to write new music.

What prompted your journey as a carillonist?

My training was on piano, but I was attracted to the carillon because it was just such a magnificent instrument. It’s architectural. It’s historic. It’s just a magical building to enter into and climb up all those stairs towards these huge, echoing bells that weigh tons, to play music for the entire neighborhood. It’s absolutely magical.

I became interested in playing the carillon as an undergraduate at Yale University, where there actually is no faculty member or staff member involved with the carillon directly. It’s an entirely student-run organization. Sort of like an a capella group, except they play the bells every day. It was a pretty remarkable experience. I essentially became in charge of an entire instrument and tower as I became one of the student leaders. And so, I felt very deeply professionally invested by the time I graduated. I had helped oversee the renovation of the carillon and the renovation of the tower and the planning of a national convention. And I really loved that the university entrusted the students to rise to the responsibility of doing those things.

Although I had no intention of ever making music performance my professional goal, I went on to carillon school from there and it just continued to be an overwhelming interest. After I studied at the Royal Carillon School in Belgium, I went to the Eastman School of Music and got a master’s degree in organ. But my ulterior motive while I was there even was that they had a carillon that had gone silent for six years. So, as a graduate student, I actually rebuilt the program there and found a successor who took over after I left. So, there’s now a flourishing program there and then I went on to a couple of other places and then came to the University of Michigan.

I think because I had that model of can-do leadership at Yale, it didn’t even occur to me that I couldn’t just go to a university and build a carillon program. Here, I try to give some measure of the same opportunity to my students. To invite them to take on leadership responsibilities and to organize their own concerts and their own group.

What are some key points you want to share with readers?

One… I would love for audiences to come up the tower and actually visit during the concerts. Most people don’t realize that the towers are open to the public during the concerts. I think part of that is even the imposing architecture of this tower. It’s fortress-like and people assume they can’t come in. This is really a community resource, and the more that I can actually talk to audiences, the more I can also learn about what they want to hear. What would make them feel welcome and represented on campus.

Two… I would love for people to help me spread the word that students can take carillon lessons. Right now, it seems like most people learn about the class through word of mouth, and I think to a certain degree then that confers an advantage on the privileged who are within the circles already connected to classical music. I think many students who maybe are first-generation students, for example, could really benefit from feeling like they are the master of one of the symbols of this campus and it could be a transformative experience and also inspiring to other first-generation students.

Three… For students not enrolled in the School of Music, Theatre, and Dance, they have to pay a $250 course fee, so I am working on finding ways to raise the money to be able to provide a scholarship for students who have demonstrated financial need to be able to the take the class as well. Or it might just been a student can save up to the course once, but then can’t continue to advance, so I’d really like to take away that barrier.

What are some of your future artistic endeavors?

I’ve been successful in diversifying our repertoire in certain directions that I’ve already mentioned, but I have a much greater learning curve when it comes to finding ways to arrange and involve Native American musicians with the carillon, as well as Arab American musicians. So, I think both of those segments on our campus really need more representation in our campus soundscape and so, anyone who specializes in performing arts in those cultures, I would love to connect with them and brainstorm.

Are you interested in Dr. Ng’s work? Feel free to reach out to her. You may also hear Dr. Ng’s carillon concerts from anywhere on the University of Michigan central campus every day at noon. Visit Dr. Ng’s profile here.