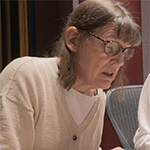 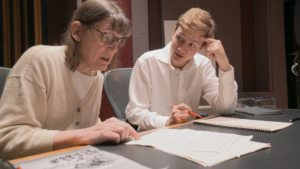 A new recording by U-M students will bring to life, for the first time since WWII, music that was arranged and performed by Auschwitz prisoners.

Last summer, University of Michigan music theory professor Patricia Hall traveled to the Auschwitz-Birkenau State Museum to conduct research on the music manuscripts in their collection. She became interested in a music manuscript arranged and performed by prisoners in the Auschwitz I men’s orchestra.

According to Hall, very few manuscript parts from works arranged and performed at Auschwitz have survived.

Ironically titled “The Most Beautiful Time of Life” (Die Schönste Zeit des Lebens), the piece is a light foxtrot based on a song by Franz Grothe, a popular German film composer. It was likely performed as dance music for the Auschwitz garrison. 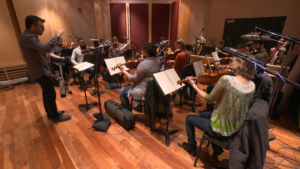 Upon returning to Michigan, Hall shared the work with Professor Oriol Sans, conductor of the U-M Contemporary Directions Ensemble, and together they set out to make a professional recording.

“This recording is highly significant,” Hall said. “We’re bringing this work to life, hearing it as closely as possible to what it would have sounded like at Auschwitz I in 1943.”

Hall worked with Josh Devries, a graduate student in music theory, who transcribed the parts from their handwritten form into Sibelius music notation software, making them more legible for the performers.

The recording took place at the U-M Duderstadt Center in October and will become part of the Auschwitz-Birkenau State Museum’s collection.

Hall, so far, has been able to identify two of the three prisoners who arranged the piece, based on their prisoner numbers, with which they signed the manuscript. Both Polish political prisoners, they were Antoni Gargul, who was released from Auschwitz in 1943, and Maksymilian Piłat, who was transferred to Sachsenhausen in 1944. He played in the Baltic Philharmonic in Gdańsk after the war.

The Contemporary Directions Ensemble will perform the work at a free concert at 8 p.m. Friday, Nov. 30, in Hankinson Hall at the E.V. Moore Building, 1100 Baits Drive, on U-M’s North Campus. Watch a livestream of the performance on SMTD’s website.