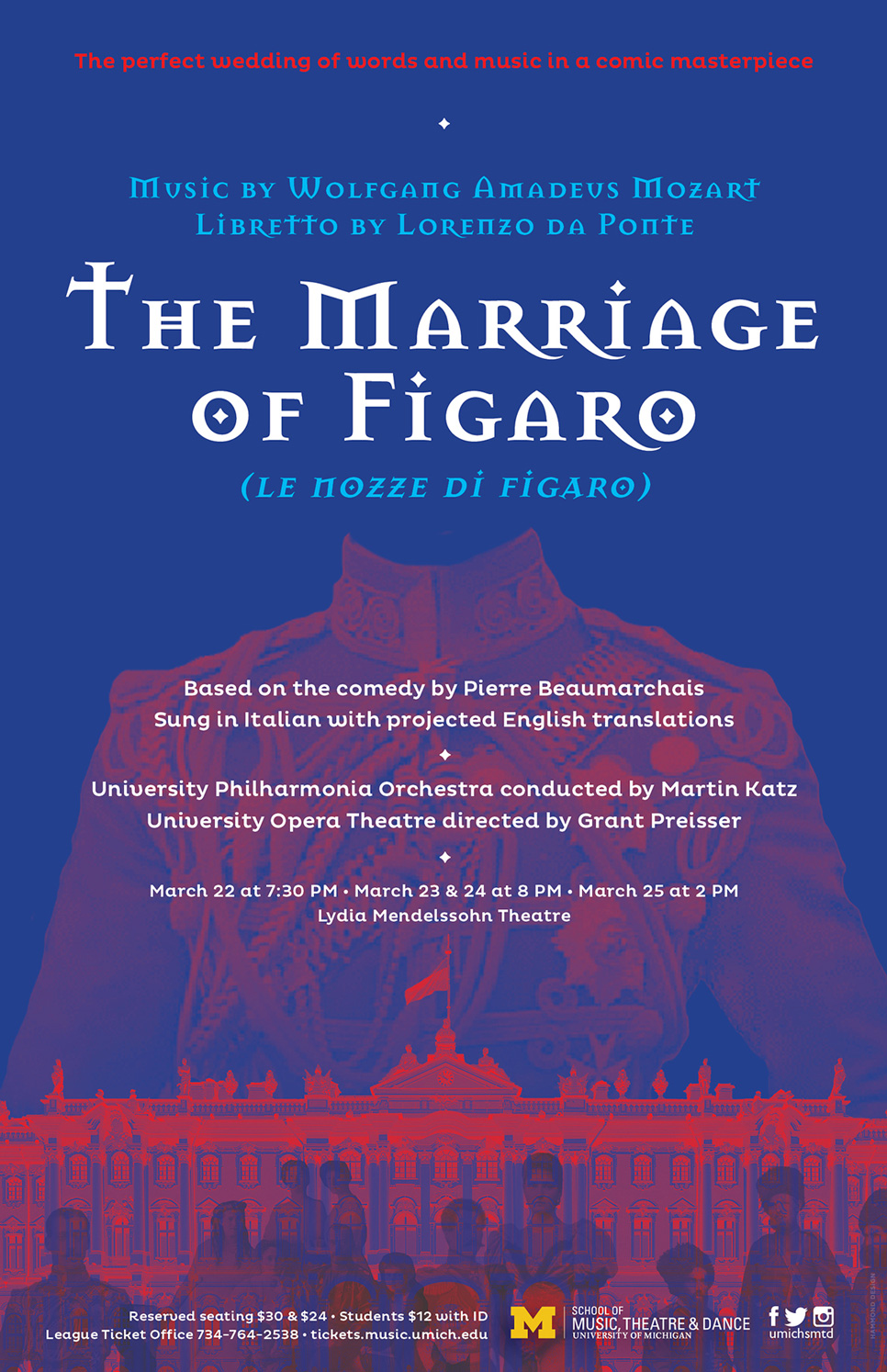 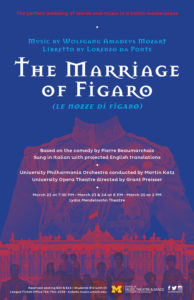 The Story: Count Almaviva’s valet Figaro is looking forward to his imminent wedding with the beautiful Susanna. Unfortunately, his lascivious employer is also intent on bedding the young chambermaid. Aware of the Count’s intentions, the Countess, with Susanna’s help, intends to teach her husband a lesson on the dangers of infidelity. Add in a love-sick teenager who causes unexpected confusion and hilarity abounds as multiple love interests vie for the perfect pairing. Through subtle intrigue, scintillating sexual games, and mistaken identities, Figaro and Susanna must outmaneuver and outwit the entire household to end up finally in each other’s arms.

Artistic Significance: Called “the world’s most perfect opera,” The Marriage of Figaro has delighted audiences since its premiere in 1786. The first collaboration between Mozart and librettist da Ponte, Figaro is the successful sequel to The Barber of Seville. Da Ponte’s witty libretto melds humor with humanity and is paired with Mozart’s groundbreaking score in a true marriage of music and drama. From the instantly recognizable overture to the rousing ensemble finale, the opera is filled with one brilliant melody after another. A celebrated operatic tour de force, The Marriage of Figaro sparkles with genius. 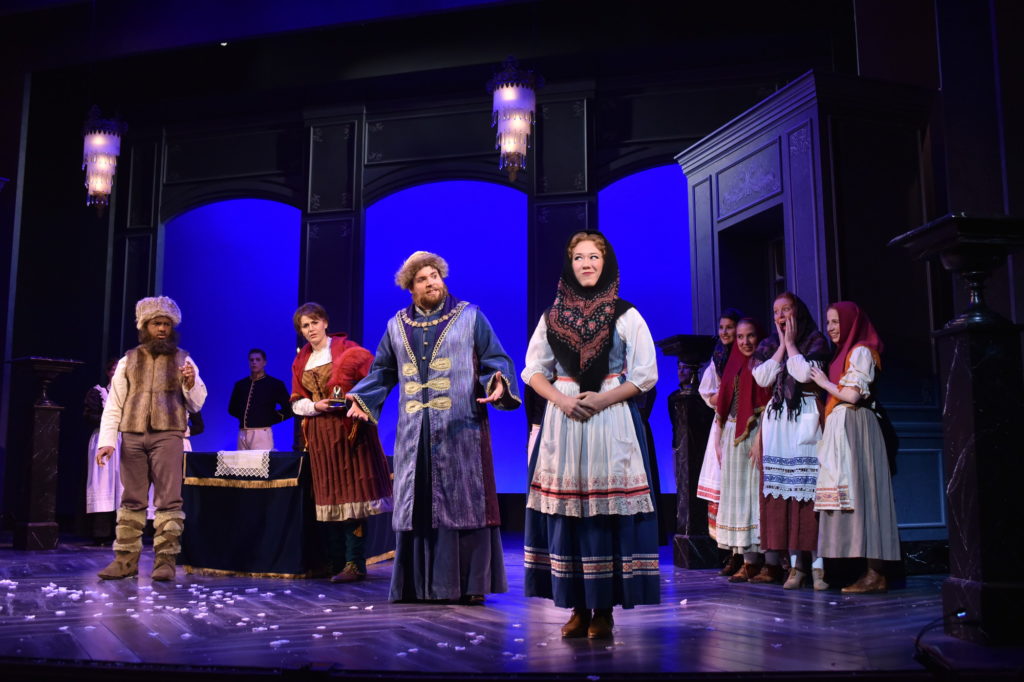 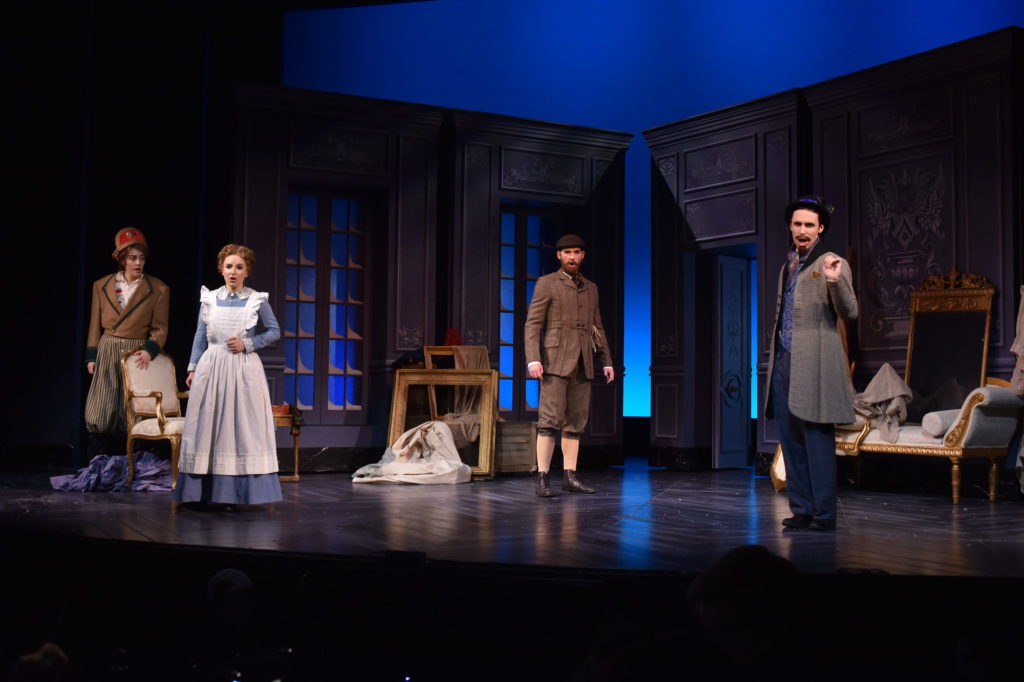 While preparing for their wedding, the valet Figaro learns from the maid Susanna that their philandering employer, Count Almaviva, has designs on her. At this the servant vows to outwit his master. Meanwhile the scheming Bartolo encounters his housekeeper, Marcellina, who wants Figaro to marry her to cancel a debt he cannot pay. After Marcellina and Susanna trade insults, the amorous page Cherubino arrives, reveling in his infatuation with all women. He hides when the Count enters what will be Figaro and Susanna’s new quarters. He pursues Susanna but conceals himself when the gossiping Don Basilio enters. The Count steps forward, however, when Basilio suggests that Cherubino has a crush on the Countess. Almaviva is enraged further when he discovers Cherubino in the room. Figaro returns with fellow servants, who praise the Count’s progressive reform in abolishing the droit du seigneur – the right of a noble to take a manservant’s place on his wedding night. Almaviva assigns Cherubino to his regiment and leaves Figaro to cheer up the unhappy adolescent.

Later in the morning the Countess laments her husband’s waning love but plots to chasten him, encouraged by Figaro and Susanna. They will send Cherubino, disguised as Susanna, to a romantic meeting with the Count. Cherubino, smitten with the Countess, appears, and the two women begin to dress the page for his farcical rendezvous. While Susanna goes out to find a ribbon, the Count knocks at the door, furious to find it locked. Cherubino quickly hides in a closet, and the Countess admits her husband, who, when he hears a noise, is skeptical of her story that Susanna is inside the wardrobe. Susanna, having observed everything in secret, helps Cherubino out a window, then takes his place in the closet. Both Count and Countess are amazed to find her there. All seems well until the gardener, Antonio, storms in upset about his crushed plants. Figaro, who has run in to announce that the wedding is ready, pretends it was he who jumped from the window, faking a sprained ankle. Marcellina, Bartolo and Basilio burst into the room waving a court summons for Figaro, which delights the Count, as this gives him an excuse to delay the wedding.

Susanna leads the Count on with promises of a rendezvous in the garden. The nobleman, however, grows doubtful when he spies her conspiring with Figaro. Marcellina is astonished but thrilled to discover that Figaro is in fact her long-lost natural son by Bartolo. Mother and son embrace, provoking Susanna’s anger until she too learns the truth. Finding a quiet moment, the Countess recalls her past happiness. The Countess enlists the aid of Susanna in composing a letter that invites the Count to the garden that night. Later, during the marriage ceremony of Figaro and Susanna, the bride manages to slip the note, sealed with a hairpin, to the Count.

Barbarina, after unsuccessfully trying to find the lost pin, tells Figaro and Marcellina about the meeting between the Count and Susanna. In the moonlit garden, Susanna and the Countess are ready for their masquerade. Alone, Susanna rhapsodizes on her love for Figaro, but he, overhearing, thinks she means the Count. Susanna hides in time to see Cherubino woo the Countess – now disguised in Susanna’s dress – until Almaviva chases him away and sends his wife, who he thinks is Susanna, to wait for him. By now Figaro understands the joke and, joining the fun, makes exaggerated love to Susanna in her Countess disguise. The Count returns, seeing, or so he thinks, Figaro with his wife. Outraged, he calls everyone to witness his judgment, but now the real Countess appears and reveals the ruse. Grasping the truth at last, the Count begs her pardon.