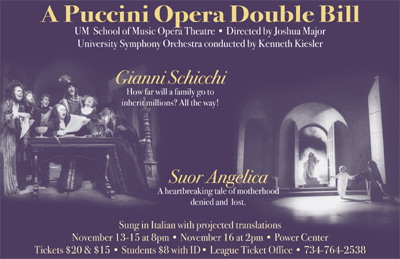 Suor Angelica (or Sister Angelica) and Gianni Schicchi (pronounced “Johnny Skeekee”) are two of the three one-act operas featured in Puccini’s “Il Trittico” (The Triptych). Writing a trio of short operas had always been an aspiration for Puccini, but his publisher, Ricordi, opposed to the idea. In 1916, near the end of his career, Puccini collaborated with librettist Giuseppe Adami to create “Il Trittico.” Written as an operatic answer to Dante’s Divine Comedy, “Il Trittico” features the tales of three separate lives, each headed either toward heaven, hell or purgatory. Director Joshua Major chose to produce Suor Angelica (heaven) and Gianni Schicchi (hell), as “the operas have completely different sentiments. The contrast between the two pieces is brilliant.”

Suor Angelica, a tale of loss and repentance, will be performed as the first piece in the “Double Bill.” After bearing an illegitimate child in late-17th century Italy, Angelica is sent to a convent by her family. Seven years later, Sister Angelica receives the news that her child has died. Devastated, she sings the lament, “Senza mamma” (“Without mamma”), mixes poison, and resolves to kill herself. After drinking the poison, Sister Angelica realizes that her suicide is a mortal sin, and therefore she will not go to heaven. As she dies, Sister Angelica prays for forgiveness, and in her last moments, has a vision of the Virgin Mary bringing her lost child to her.

Gianni Schicchi, the finale to the U-M production, is an emotionally lighter piece. Gianni Schicchi tells the story of a greedy family trying to gain control of the estate of their dying relative, Buoso Donati, in mid-13th century Florence. The family turns to Gianni Schicchi, a cunning con artist, to help secure the inheritance. But Schicchi has plans of his own: he turns the con around on the family, keeping Buoso’s riches for himself. Gianni Schicchi was Puccini’s only comic opera, and features the popular aria, “O mio babbino caro” (“Oh my dear daddy”), sung by Schicchi’s daughter Lauretta.

To highlight the contrast between the two operas, director Joshua Major presents Gianni Schicchi as a physically comedic romp with the Donati family. The set includes trap doors and a 13th century version of a Murphy bed. Staying true to the sentiment of Suor Angelica, Major sets this tragedy in the traditional, somber convent setting. Both operas will be set in the time periods for which they were originally written.

Setting: A convent in the latter part of the 17th Century.
Years earlier, a young noblewoman had given birth to an illegitimate son. To avoid further embarrassment, her scandalized family forced her to enter a convent and take the veil. Now known as Sister Angelica, she tends to the health and well being of her sisters. She spends her days in prayer and atonement for her sin, waiting for word about her family and her adored child. The Abbess announces a visitor for Sister Angelica. It is her aunt, the Princess. The old woman has come to obtain Angelica’s release from any claim on her dead parents’ estate in favor of her younger sister. Angelica pleads for some word about her little boy and finally learns that he had died from fever a few years earlier. The news is more than Angelica can bear and in her distraction, she drinks a deadly poison. Suddenly realizing the full implication of what she has done, she begs the Virgin to forgive her mortal sin.

Setting: The home of Buoso Donati, Florence, Italy, 1299.
The story begins when the wealthy Buoso Donati dies. It is rumored that old Buoso has willed all his money to the Church in repentance for his sinful life. After a brief period of feigned grief, his relatives conduct a feverish search for the will. They soon discover that there is much truth to this loathsome rumor. So, in an effort to extract what they consider to be their lost legacy from the clutches of the clergy, the family must resort to some sort of deceit. But what is to be done? There is only one man in all of Florence who is clever and cunning enough to help the greedy relatives gain an inheritance: the ever-resourceful peasant Gianni Schicchi! They call on Schicchi and he hatches a plot. They explain that no one outside of the immediate family knows Buoso is dead, nor has any outsider, as yet, discovered the real contents of the will. Therefore the family must call the notary to take the last will and testament of the “dying” Buoso Donati and all will be right again. But not without a price!