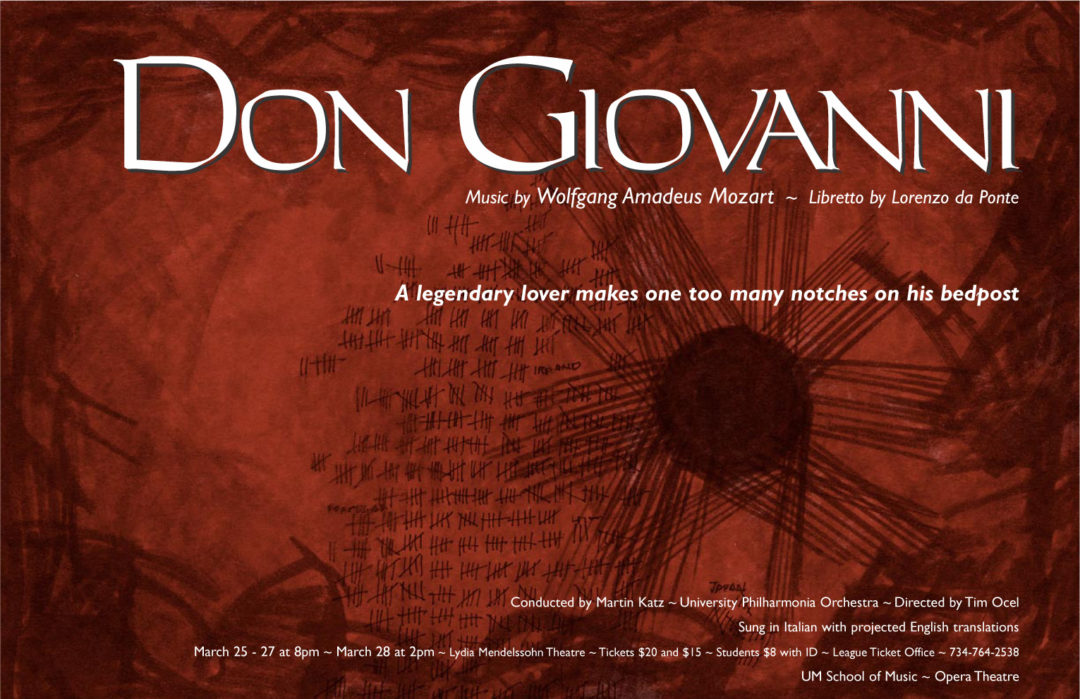 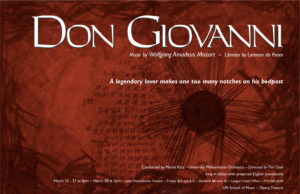 Don Giovanni, a “dramma giocoso” in two acts, received its premiere on October 28, 1787, at the National Theatre in Prague. Its popularity has never diminished to this day and it is rightly regarded as one of the greatest operas of all time.

Set in Seville, Spain, the opera tells the tale of Don Giovanni, who is a reckless seducer of women, and of his comic and perpetually ill-treated valet Leporello. Caught in the act of seduction, the Don accidentally kills Donna Anna’s father who comes to defend his daughter’s honor. Don Giovanni is pursued, and, after a series of misdeeds and attempted seductions, he meets unexpectedly with the specter of the murdered father in the form of a statue while hiding in a churchyard. The Don invites the statue to supper, and the statue accepts. At dinner, the statue exacts his revenge as he drags the defiant Don into hell. The opera concludes as the Don’s victims gather to plan their future and provide a moral to the story. 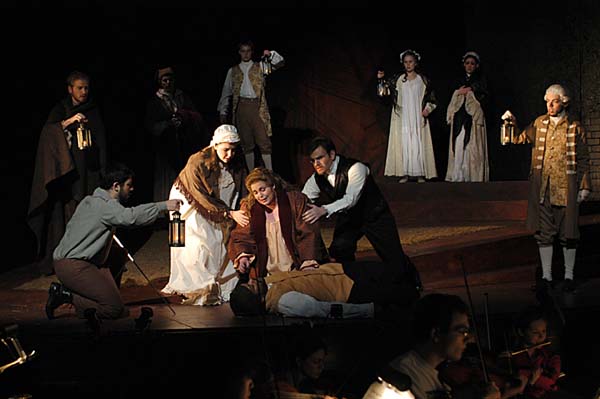 Don Juan: A budding love holds inexplicable delights, and all of love’s delights are found in change. One can almost savor the sensation of a young beauty’s heart melting under a hundred compliments, of the progress one is making, day after day, in combating with tears and sighs the innocent modesty of a soul struggling not to be taken, and of the success one has had in vanquishing her qualms and in guiding her gently to where we have longed for her to be. But when the time comes where one is the master, nothing more can be said, nothing more can be wished for, the beauty of passion is over, and we fall asleep in love’s tranquility, until some new object rouses our desires and offers our heart the winning charms of a new conquest yet to be made.

— Don Juan by Moliere, translated and adapted by Richard Nelson

Don Juan: Hypocrisy is a vice in fashion, and whatever is in fashion passes for virtue…take a good look at all those who under such a guise have hid their true nature, and have veiled their corruption, their greed, their cruelty, and decadence, and incompetence, and cowardice and ambition; and who with religious smiles and religious airs have shielded themselves from being seen for whom and what they really are.

— Don Juan by Moliere, translated and adapted by Richard Nelson

Women sense that I search out the beauty that dwells within them.

Leporello is keeping watch as Don Giovanni attempts to seduce Donna Anna. When confronted by the Commendatore, her father, Don Giovanni reluctantly duels and slays the older man. Don Ottavio, who is Donna Anna’s betrothed, tries to comfort her and swears to avenge her father’s death. Having escaped, Giovanni and Leporello coincidentally meet Donna Elvira, one of Giovanni’s abandoned conquests who is seeking her own revenge. Don Giovanni quietly slips away as Leporello lists his master’s accomplishments. Near Giovanni’s palace, he and Leporello come upon a wedding party. Giovanni attempts to seduce the bride, Zerlina, but she is rescued by Elvira. Meanwhile, Donna Anna and Don Ottavio arrive to ask Don Giovanni’s help in finding the Commendatore’s murderer. As Giovanni leaves, Donna Anna recognizes the voice of her seducer and her father’s murderer. Don Giovanni gives a party for the peasants, at which Elvira, Anna, and Ottavio arrive masked. His attempt to rape Zerlina is foiled. Elvira, Anna, and Ottavio accuse him of murder, but Giovanni again escapes.

In order to seduce Elvira’s maid, Giovanni switches clothes with Leporello. Elvira, mistaking Leporello for Giovanni, forgives him and goes off with him. Masetto arrives in search of Giovanni, but Giovanni beats him. Zerlina arrives to comfort the wounded groom. Leporello’s disguise is discovered by Anna, Ottavio, Elvira, and Zerlina, and they berate the servant. Ottavio repledges love and vengeance, but Elvira vows to save him. Giovanni and Leporello meet in a churchyard, where the statue of the slain Commendatore speaks. Giovanni orders Leporello to invite the statue to supper. As Giovanni dines, Elvira arrives and begs him to repent. Her efforts fail, and as she leaves, the statue appears. He orders Giovanni to repent. He refuses, and is damned to Hell. In the epilogue, all the others listen to Leporello’s tale of Giovanni’s end. Each person speaks of future plans, and we are exhorted to learn our lesson from Giovanni’s fate.