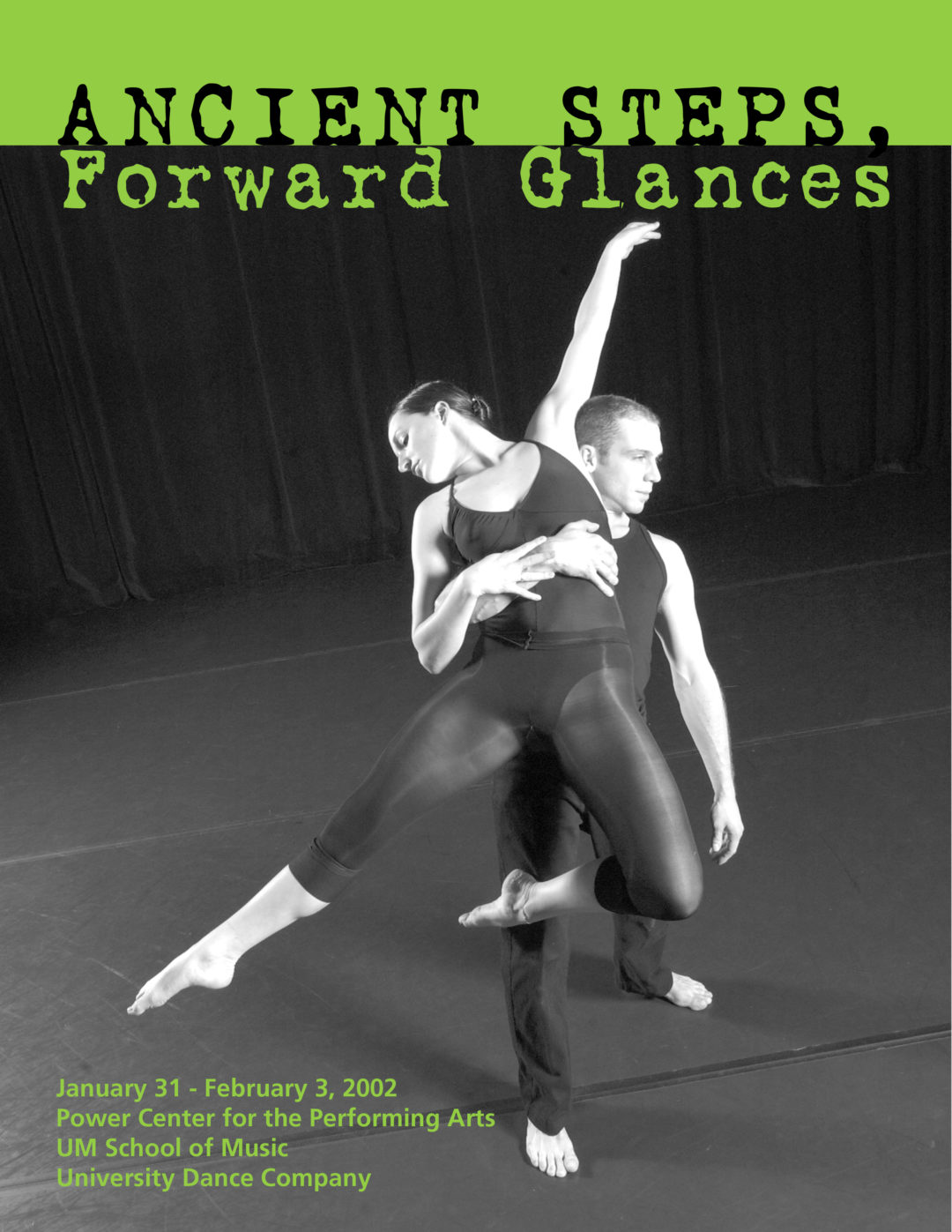 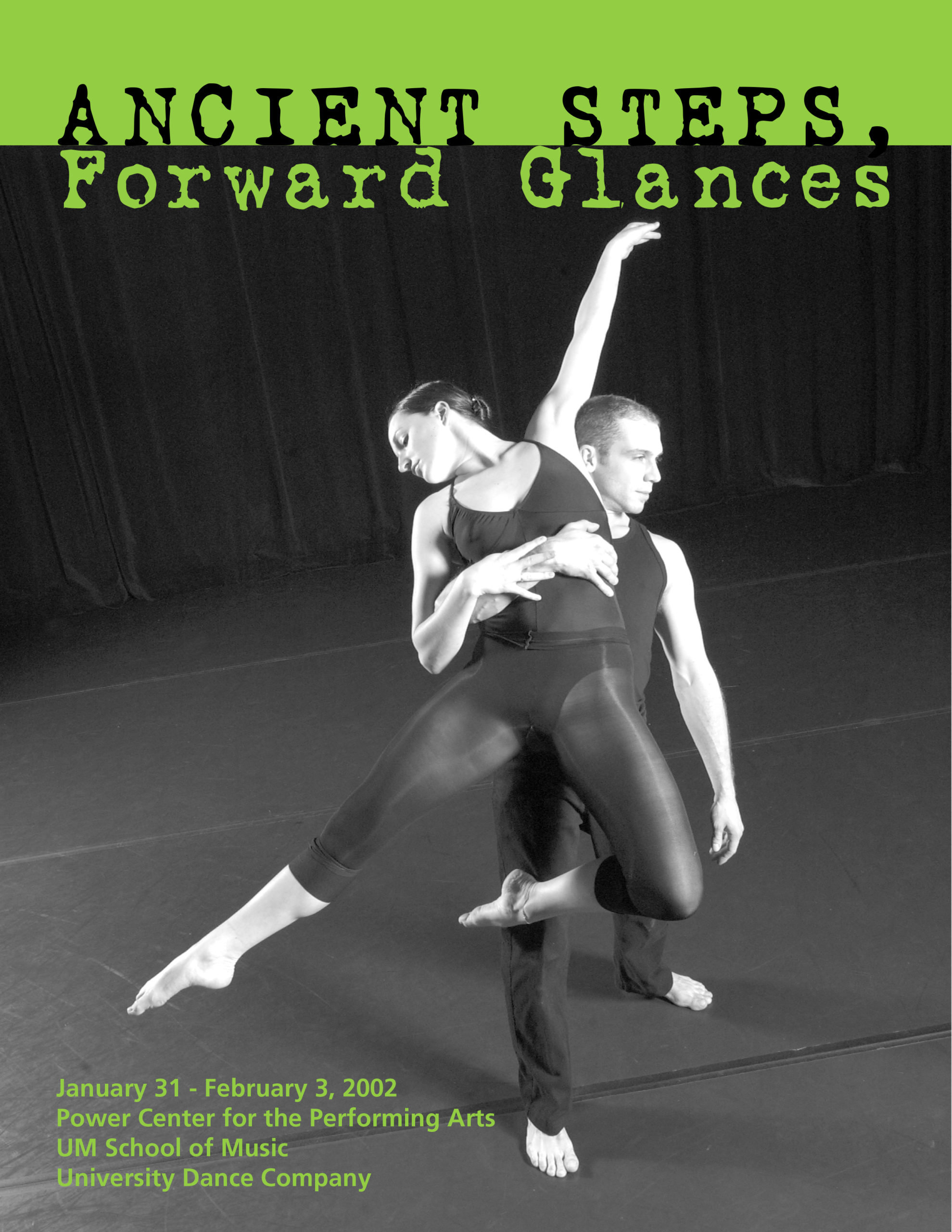 The University of Michigan’s Dance Company presents an evening of modern dance flavored by traditional performance in Ancient Steps, Forward Glances. As the show’s title implies, the common thread in the concert’s four pieces is history. It is the history of time-honored dances giving way to new movement. It is the history of a society coping with its own development and morality.

Visiting artist David Dorfman is one of the world’s most successful post modern choreographers. He is the recipient of numerous awards including two New York Foundation for the Arts fellowships and an American Choreographer’s Award. Dorfman is known for his collaborative approach to creating dances. He choreographs by learning his dancers’ personalities, then he incorporates their moods, attitudes, even their words into his work. By combining these elements with his own vision, he creates a finished product that is reflective of the world in which his performers live.

Artists-in-residence Bambang Irawan and Noor Forida Rahmalina are two of the most accomplished classical Javanese dancers of present-day Indonesia. Brought to the UM by the School of Music and the Center For World Performances, their original work, World of Birds, combines ancient royal Javanese court dance with contemporary Indonesian movement. Javanese dance was first seen in the central Java’s Borobudur Temple, one of the seven wonders of the world, as far back as the eighth century. While the art form began as a court ritual, it developed into a form of entertainment and storytelling. The guest choreographers’ dance style is called sendratari (literally art-drama-dance), a twentieth-century art form which draws on ancient Indian epics for its themes, but presents them in a Javanese style. Their dance will be accompanied by the UM’s Gamelan Ensemble, a group of performers that studies and performs on the gamelan instruments from the School of Music’s Stearn’s Collection.

Choreographer’s note: Walt Whitman’s poem, “A Noiseless Patient Spider,” evokes a soul’s yearning, ceaselessly venturing, “Till the bridge you will need be form’d, till the ductile anchor hold/Till the gossamer thread you fling catch somewhere, O my soul.” Likewise, Bach’s music for solo violin sets forth to weave a sonic architecture in space, evoking for the choreographer a tensile web of human movement and emotion and a floating window unto itself. Suspended on this intricate web, a soul may cross with grace from yearning to jubilation.

Choreographer’s note: Brave Souls was commissioned by the UM Museum of Art for an exhibit titled “Women Who Ruled: Queens, Goddesses, Amazons 1500-1650.” The exhibit, which opens on February 17, 2002, examines a complex system of gender relations during the Renaissance and Baroque periods, showing how women rulers of that period cast themselves visually as goddesses, warriors, seductresses, virgins, or matrons, in order to construct and negotiate their leadership. Brave Souls takes images of women warriors contained in the exhibit as a springboard for its ideas. Drawing on discoveries from a contemporary archaeological dig, Renaissance and Baroque visual art, and shaded by the events of September 11th, the dance is structured in a series of seven brief scenes that shift between ancient, Baroque, and contemporary time frames.

Choreographer’s note: This work is inspired by the everyday life of the diverse bird communities which follow the human life and natural rhythms existing in the Ann Arbor area. These bird communities are very interesting because they run their lives as a group identified by their own uniqueness. They look for food, fly, and are joyful together. Their lovely feathers, beaks, flying, and jumping feature their natural beauty. Towards morning they awaken from a light sleep, accompanied by a soft wind and cold weather. Then, after passing a beautiful day, a mild wind and soft cold air conveys the sunset. A quiet night begins, and without annoyance the communities fall asleep. Thus, the rhythm of the bird community follows the music and the rhythm of the universe.

World of Birds is dedicated to the University of Michigan for its very commendable efforts on improving and preserving Javanese arts, especially Javanese traditional dances.

← The Grapes of Wrath The Tavern →