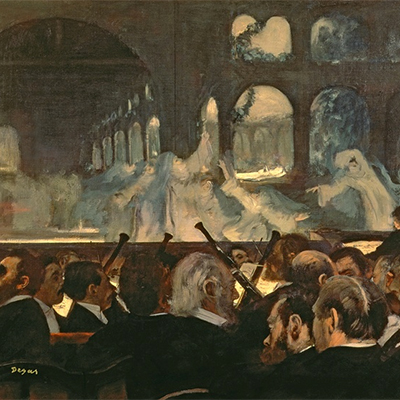 Grand Illusion: Phantasmagoria in Nineteenth-century Opera, the forthcoming book by Gabriela Cruz, associate professor in SMTD’s Department of Musicology, breaks new ground by examining the visual impact of 19th century opera. Cruz traces how technological innovation combined with influences from popular forms of entertainment to revolutionize the way opera – and, ultimately, society – was seen and understood over the course of the century.

At the outset of her project Cruz started, as many musicologists do, from the texts. She knew she wanted to consider opera not just as music and words on a page, but as a stage performance. In her reading of 19th-century operas, she began to notice a pattern of references to things that weren’t really there: ghosts, mummies, phantoms, and the like. She grappled with these occurrences for many years, trying to ascertain what the reason for this pattern might be. Her “lightbulb moment” came when she realized she needed to consider the actual lightbulbs – or, more accurately, the gas-powered lights that became fixtures in opera houses beginning in the 1820s.

When theatres were lit by candles and oil lamps, the expense and labor involved in illumination meant that performances were often dimly and heterogeneously lit, and the light level (such as it was) was constant throughout the show. Gas lighting made stages more brightly and homogenously lit, which had a large effect on opera. But the real innovation, Cruz argues, was the ability to modulate the available light by decreasing or increasing the gas flow to the lanterns. Suddenly the opera stage could be a place of light or a place of darkness, sometimes in quick succession. 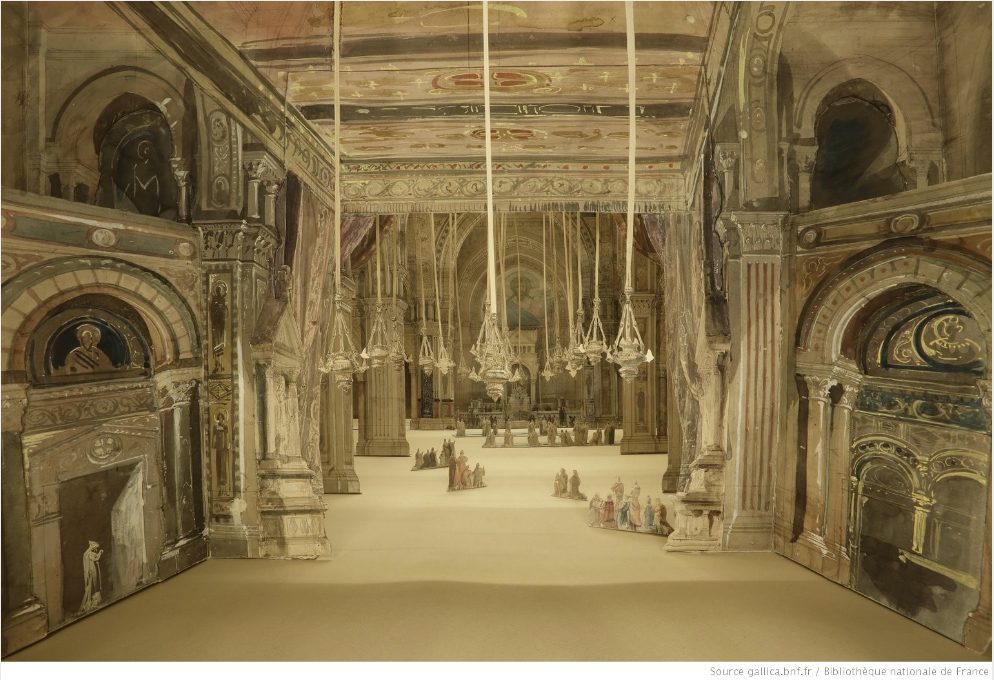 A maquette (scenic design model) from Act V of Robert le Diable, showing the prominent gas-powered chandeliers that lit up the stage.

Almost immediately after the installation of gaslight in in the Paris Opéra in 1822, scenic designers and technicians began experimenting with new visual methods that would take full advantage of this novel lighting. This process was spearheaded by Louis Daguerre (later a pioneer in photography and namesake of the daguerreotype process), who had already developed a type of life-sized diorama painting that would change its appearance based on the direction of the light source. He incorporated these dioramas into the opera, and later designers also used magic lanterns to project ghosts and phantoms.

At first, these illusions were entirely separate from the opera singers, almost a show-within-a-show. But opera composers and librettists quickly began to adapt as well. Singers learned new techniques to make the singing voice a much more homogenous instrument, hiding the difference between vocal registers and singing with as little grain as possible. In effect, they learned to create disembodied voices to echo the ghosts on stage. Similarly, composers tinkered with orchestration, calling for larger dynamic ranges and different kinds of sounds to mirror changes in lighting, and merging the timbers of different instruments to create phantasmagorical effects. By the later part of the 19th century, orchestras began to move beneath the stage, echoing gaslight itself as an invisible machine that worked behind the scenes. Opera librettos, too, began to reflect the new longer-lasting light source by becoming longer and more connected, rather than the collection of shorter scenes that candles and oil lights had necessitated.

Cruz argues that the roots of these developments lay in phantasmagoria, a pseudo-scientific entertainment popular at the turn of the 19th century that used magic lantern projections and drew on the public’s taste for the gothic to evoke ghosts and spirits. Authorities continuously attempted to close down these shows as superstition, and so phantasmagorists learned to begin their shows with a speech that disavowed the illusions they were about to produce: despite what audiences might perceive, their work was merely science. In fact, during the French Revolution phantasmagoria was considered an explicitly republican art that actually defended the people against superstition through the use of science. Even after the Revolution, phantasmagoria continued to have a connotation of revolutionary politics: an art of the people. Choosing to incorporate phantasmagoric elements in grand opera, therefore, was a way of making what was previously an elite art form more accessible to the masses.

Ultimately, Cruz contends, the idea of spectacle, of appearance mattering more than reality, became a part of everyday life and culture in the 19th century. By the 1840s, Karl Marx was already writing about economics in the same terms: how things are perceived is where their value lies. Thus in the developments within opera in the 19th century, Cruz identifies the seeds of a modern way of looking at the world. 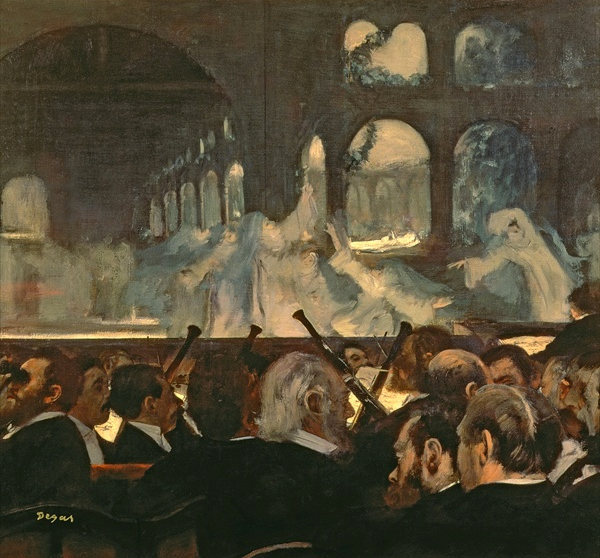 Edgar Degas, The Ballet Scene from Meyerbeer’s Opera Robert Le Diable, 1876.
The ballet depicted in Degas’s painting, from the 1831 production of Robert le Diable, was in itself revolutionary: in order to depict ghosts rising from the dead (a scene drawn from an earlier phantasmagoria), the ballerinas dressed all in white and occasionally danced unnaturally en pointe – a novel technique at the time. This was the inauguration of the romantic ballet blanc on stage, which became extremely popular throughout the 19th century. Meanwhile, in 1876, a young Degas used an early form of impressionism to depict the otherworldly quality of the ballet, contrasted with the realism of the audience and orchestra members. The painting also evoked ghosts in another way: the opera house that had introduced gas lighting and originated so many developments in the art form had closed by the late 1870s, so Degas had painted the scene from memory – a fact of which his contemporaries would be well aware.

Cruz was able to trace all of these developments through a variety of sources. On a SMTD-funded research trip to Paris, she gave herself a crash-course in historical technology to learn about the introduction of gaslight to the Opéra. She then tried to take a holistic view of the innovations that stemmed from that change. For her chapter on Giacomo Meyerbeer’s Robert le Diable (1831), for example, she explored not only the opera’s text and its ideas of light and darkness, but also the notes of the librettists, Daguerre’s drawings from the first production, and newspaper articles and reviews to examine the public’s reception of the piece. From there, she returned to the text itself to explore more fully how these ideas are expressed through words and musical phrases. Cruz also drew from a novella by Honoré de Balzac, Gambara, in which an aristocrat brings a worker to see Robert le Diable and while the former is confused by its meaning, the latter understands it right away. Balzac himself was connected to the Saint-Simonian socialist movement, and clearly understood the popular appeal of the new illusion-based opera.

Meyerbeer was an early proponent of the spectacle of opera, and in later chapters Cruz’s book also traces how Richard Wagner and Giuseppe Verdi pushed the art form further. In fact, Cruz chose to start writing by working on the final chapter, on lurking mummies in Verdi’s Aida – examining the consolidation of phantasmagoria in opera before moving earlier (through time and in the book) to trace its roots.

As she puts the final touches on Grand Illusion, Cruz is already thinking ahead to her next project, which will examine the parodies of opera performed in popular theatres in the 19th century. These parodies were performed by actors, not trained singers, and were very popular with audiences before operetta established itself worldwide in the 1860s. She is looking forward to shedding the ghosts of her last project and turning to comedy!