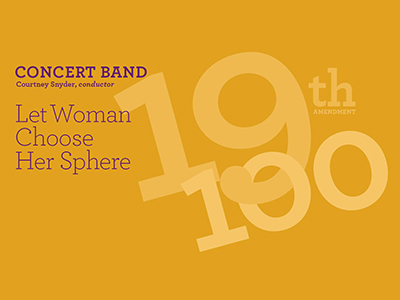 More Than a Concert: “Let Woman Choose Her Sphere” Explores Women’s Rights through Words and Music 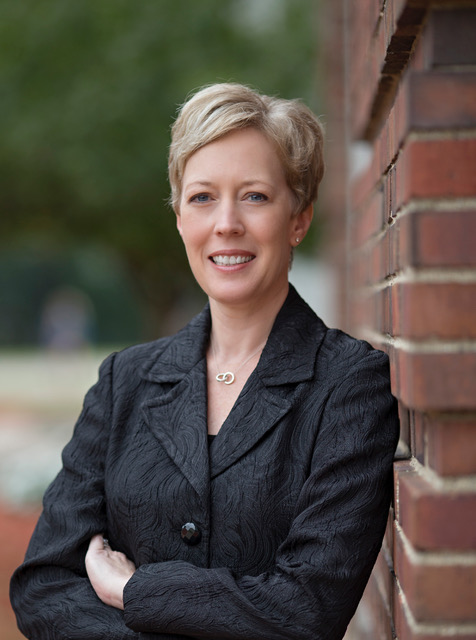 Sometime around the beginning of 2018, Professor Courtney Snyder began thinking about commissioning a new work that would ultimately be premiered by the University Concert Band on the Ann Arbor campus. Determined to showcase an underrepresented composer, Snyder – associate director of bands and associate professor of music in the School of Music, Theatre & Dance – realized that the centenary of the 19th Amendment, passed in 1919 and ratified in 1920, was fast approaching. Suddenly, it became clear: she would commission a piece specifically focused on the anniversary of women’s suffrage.

Snyder approached Valerie Coleman, a Grammy-nominated flutist and a noted composer named one of the “Top 35 Women Composers” by the Washington Post. She knew Coleman had experience composing for winds, as she had written pieces for her own ensemble, Imani Winds, founded in 1997. She knew Coleman’s music was accessible and would be fun to play. “When I reached out to her to do it,” Snyder recalled, “she was on board right away.” Seeking others to form a commissioning consortium, Snyder reached out to women college band directors, ultimately forming a group of 13 women to collectively commission this new work. 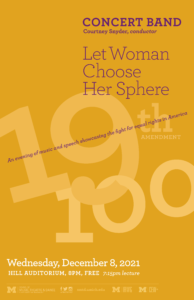 Attend the concert or watch the livestream!

Wanting to include a song from the period of the women’s suffrage movement, Snyder combed through the Library of Congress archives and found a song, with lyrics by D. Estabrook and set to the tune of “Auld Lang Syne,” called “Keep Woman in Her Sphere.” Its lyrics seemed tailor-made for this event: In the first two verses, men being questioned about the women’s suffrage movement say, “Keep woman in her sphere.” In the final verse, an “earnest, thoughtful man” says, “Her rights are just the same as mine, let woman choose her sphere.” Those resonant final words would eventually become the title of Coleman’s new piece as well as the name of the concert.

From that point on, the project expanded and evolved beyond its initial concept. Snyder decided that the concert would exclusively feature music composed by women and would explore many facets of women’s rights, not just the right to vote. She wanted the event to explore the complexities of women’s ongoing fight for equality, to address the fact that the 19th Amendment only granted white women the right to vote, and to acknowledge the fragility of voting rights in the 21st century. “I wanted to…make sure that [the concert] didn’t just celebrate the centenary,” she recalled, “but was trying to move it forward, to recognize this was an accomplishment, but it wasn’t the accomplishment.” Snyder decided to incorporate the text of speeches and writings by prominent women during the suffrage movement and in the decades since, arranging for faculty and students from the Department of Theatre & Drama to recite them during the concert. Excerpts from these texts range from Sojourner Truth’s “Ain’t I a Woman” to Betty Friedan’s The Feminine Mystique, to Vice President Kamala Harris’s post-election victory speech.

An additional performance grew from conversations that Snyder had with Tiffany Ng, associate professor of carillon and university carillonist, about presenting a carillon concert from the Charles Baird Carillon in Burton Memorial Tower as part of the event. A passionate advocate of highlighting the work of underrepresented artists, Ng was enthusiastic about the project. As she was on leave at the time, Dr. Pamela Ruiter-Feenstra organized a carillon student program featuring pieces by women composers.

The many facets of the event came together into a cohesive whole, and it was scheduled for March 17, 2020. Just days before, however, the entire campus – indeed, much of the country – shut down due to the COVID-19 pandemic. The concert band performance was canceled, but on the evening before the campus shutdown took effect, the carillon concert was performed (and livestreamed via Facebook), with the bells ringing out across an emptying campus.

Unsure of when this event might be rescheduled, Snyder spent the many intervening months refining and enlarging the concept of the event, finding some silver linings along the way. She dove deeper into research about notable women’s rights activists, making changes to the lineup of writings. She asked SMTD music professor Lynne Shankel to create a new arrangement for the “Keep Woman in Her Sphere” lyrics; that new work, “The Sphere,” was written for three voices and piano, and will be performed by students in the Department of Musical Theatre. And, with pandemic-related funding support from the Center for the Education of Women (CEW), Snyder was able to bring additional composers to Ann Arbor for the event. Eventually, the concert was rescheduled for December 2021.

Having returned to campus, Ng put together a new program of carillon pieces composed entirely by women to be performed before the rescheduled concert. The timing for this carillon concert is fortuitous, as it isn’t only women’s right to vote that is experiencing a hundred-year anniversary. “We’re coming up on the centennial of women’s involvement in the carillon,” Ng explained. For hundreds of years after it originated around 1500 in the Netherlands, women were not permitted to play the instrument. Ng listed some of the objections to women being carillonists: “they’re not strong enough, it’s not appropriate, they have to wear pants (heaven forbid!).” Each piece in the program Ng has assembled represents a different “first” for women carillon composers, including a piece by Adèle Colson, the first woman to earn a carillon diploma, and another by Catharina Van Rennes, the first woman to publish a carillon score.

In addition to the carillon concert and the concert band performance, the evening will include a lecture led by Snyder and featuring Coleman and several other composers in the program: Margaret Brouwer, Felicia Sandler, and U-M faculty members Shankel and Roshanne Etezady. To commemorate the event, audience members will receive a 48-page, full-color program, designed by Hannah Smotrich, an associate professor in art and design in the Stamps School of Art & Design. With Snyder’s extensive program notes, biographical notes and photographs for each composer, the text of the featured speeches and writings, and an extensive timeline of notable events in the women’s rights movement, this program helps provide a fuller picture of the fight for women’s equality – providing an understanding of how much has changed, and how much has stayed the same. “What’s really important about this is who actually [spoke these words] and when,” Snyder explained. “Because the when is shocking…. What I’ve learned is how many times women have said exactly what needs to be said, but no one was listening.”