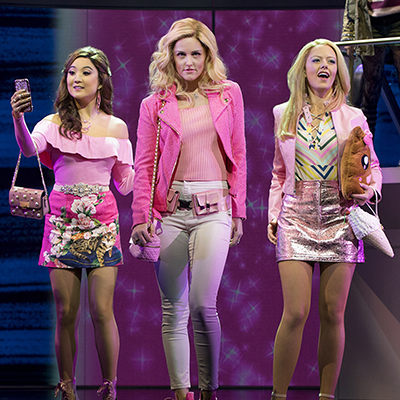 Meet the (not remotely) Mean Girls 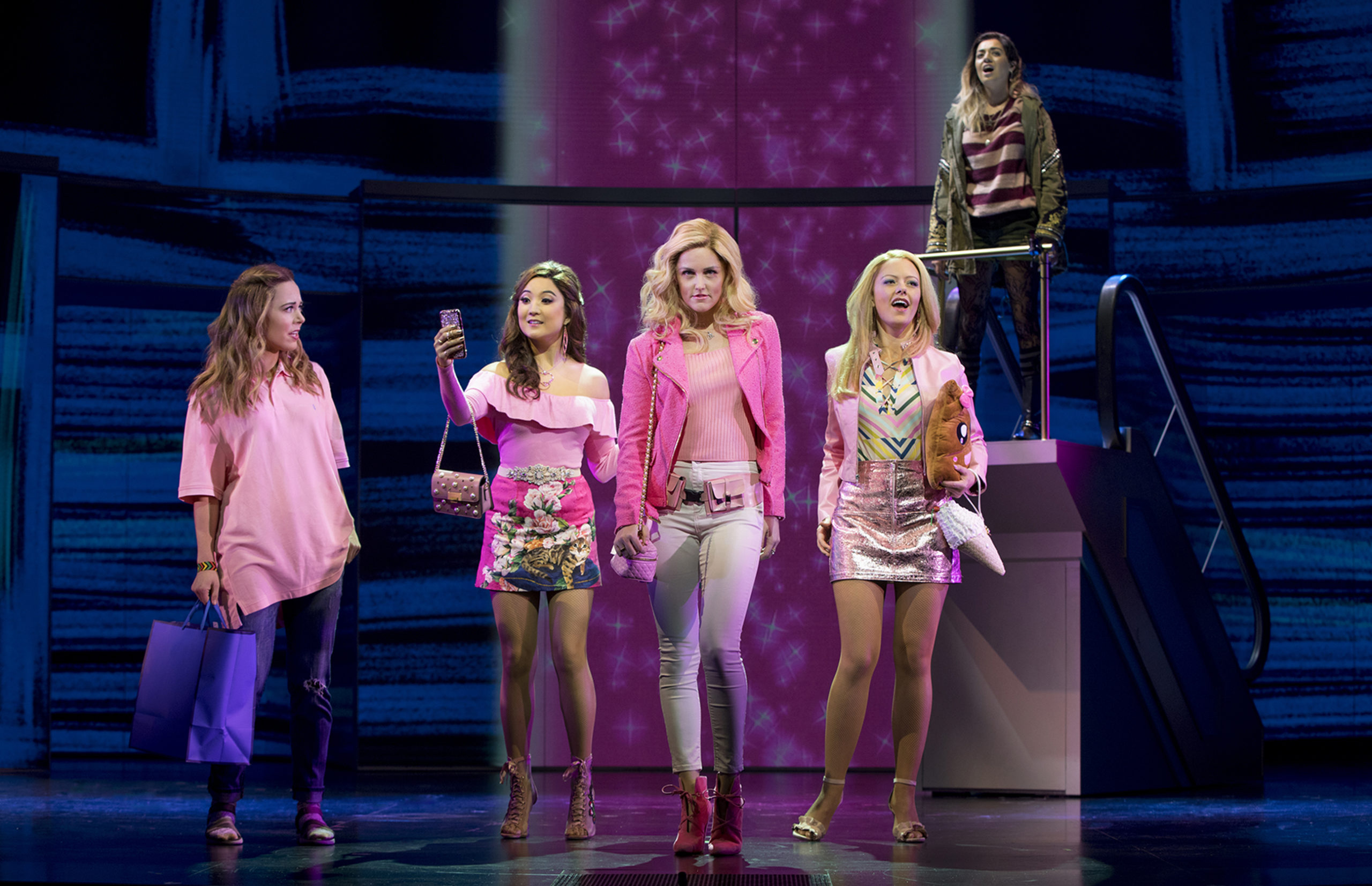 When Erika Henningsen arrived at Michigan as a musical theatre freshman in 2010, she viewed her classmates Taylor Louderman and Ashley Park—both seasoned sophomores—as the ultimate in cool. Seeing them on stage, she thought: “I just want them to like me, I just want to be friends with them.”

Her wish came true: over the next year, the three became fast friends, connected by their shared experiences and a mutual love of their chosen genre.

Eight years later, the three women (who live within blocks of one another) are performing together on Broadway as friends of a jarringly different type. Along with actress Kate Rockwell, they are the stars of Mean Girls, based on Tina Fey’s wildly popular 2004 film. The show features a book by Fey, music by her husband Jeff Richmond, lyrics by Nell Benjamin, and is choreographed and directed by Casey Nicholaw. It opened on April 2 and was immediately proclaimed a hit.

Playing friends on stage is a surreal experience for them, and also for friends and family. “My one big song in the show has me singing to Erika about Taylor,” said Park. “When our parents saw the show, they said, ‘It’s just so bizarre!’” The cast and crew, meanwhile, refer to the trio as “the sorority.”

Louderman stars as Regina George, the queen bee at her public school in Evanston, Illinois, who reigns over her closest friends, Gretchen Wiener (“that’s so fetch”), the insecure rich girl played by Park, and the adorably dim Karen Smith, played by Rockwell.

Joining the clique—derisively known as “The Plastics” by their schoolmates—is new girl Cady Heron, a role made famous in the film by Lindsay Lohan and filled by Henningsen in the musical. Cady has just moved back to the United States after spending most of her life in Africa, where she was homeschooled by her zoologist parents, making her an innocent in this snake pit of an American high school. As she falls under the influence of the pretty mean girls, the fun begins.

The Michigan alumnae, who also starred in the Washington, DC tryouts last year, were all big fans of the movie. “It was kind of our 16 Candles,” said Louderman. “It defined our generation and our lingo.” As teens, she said, she and her friends would caption photos of themselves with famous lines from the film, such as “On Wednesdays we wear pink.”

Louderman, from Madison, Wisconsin, is something of a legend at SMTD, having been cast in 2012 as the lead in Broadway’s Bring It On at the end of her sophomore year.  The show about competitive cheerleaders (also based on a popular teen film), was a hit, so she did not return to school. She’s since played multiple roles in prestigious Off-Broadway and regional productions, and in 2014 was cast as Wendy in NBC’s Peter Pan Live! She returned to Broadway in 2017 as Lauren in Kinky Boots before landing the coveted role of Regina. 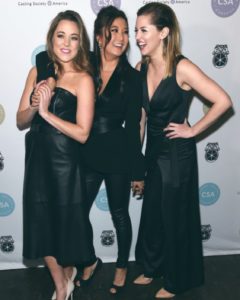 A native of Maraga, California, Henningsen also found early success, first in the Signature Theatre (DC) world premiere production of the Sheryl Crow-Barry Levinson musical Diner, based on Levinson’s 1982 film. It opened just six months after Henningsen graduated in 2014. A few months after the show closed, she was cast as the Fantine replacement in the Broadway revival of Les Miserables, just 11 months after she played the role in SMTD’s production.

Park, who grew up in Ann Arbor, launched her Broadway career when she joined the ensemble of the long-running Mamma Mia less than a year after her 2013 graduation. After touring as Gabrielle in Rodgers & Hammerstein’s Cinderella, she landed the role of Tuptim in the 2015 revival of The King and I, which won the “Best Revival of a Musical” Tony Award. Last year she appeared with Jake Gyllenhaal and Annaleigh Ashford in the revival of Sunday in the Park with George as Celeste #1/Theresa.

All three are thrilled to now be originating roles in a brand new musical where they have creative input.

“Even the littlest things,” said Henningsen, “like in the stage directions, if it says that my character has to walk stage left, I’m like, ‘Oh I got to make that up!’” She said the experience has been vastly different from Les Miserables. “That was a really quick rehearsal process. It was all about ‘We just need you to slot in, and do the job and keep the show running.’ At a certain point, the creative flexibility isn’t always there for shows that have been running a long time.”

“This is a whole different thing,” agrees Park, “and it makes all the difference that we’re doing this very high profile show with people that we really trust and feel safe around.”

That support is critical. Louderman recalls her first experience of working on a brand-new show, with Bring It On. “I had conjured in my mind what it would be like to originate a role on Broadway,” she said. “But once I got there, it was like: Okay, it’s not all sparkly ponies and unicorns; it’s hard work!”

Park was the last of the three to be cast in Mean Girls. She rehearsed lines with Louderman before the audition, and her friend assured her she’d get the part. Park got the good news when she was about to fly home from Dallas, calling Louderman from the airport to let her know.

“She picked up the phone and I said, ‘Taylor…you can’t sit with us’”—another famous line from the film. The three laughed uproariously at the memory. “We just squealed on the phone and jumped up and down!”

For Park and Louderman, playing characters so different from themselves is a blast. “This is the first time I get to play in that world and it’s a dream,” said Louderman. “But it is weird being mean to my friends!”

“Taylor very much put her own stamp on Regina,” said Park. “It’s not a caricature of a mean girl, she’s not just an evil person, you really kind of get into her head and can see why she is the way she is. And that’s what’s so fun about the musical as a whole:  you’re getting into the heads and the hearts of these high-schoolers.” 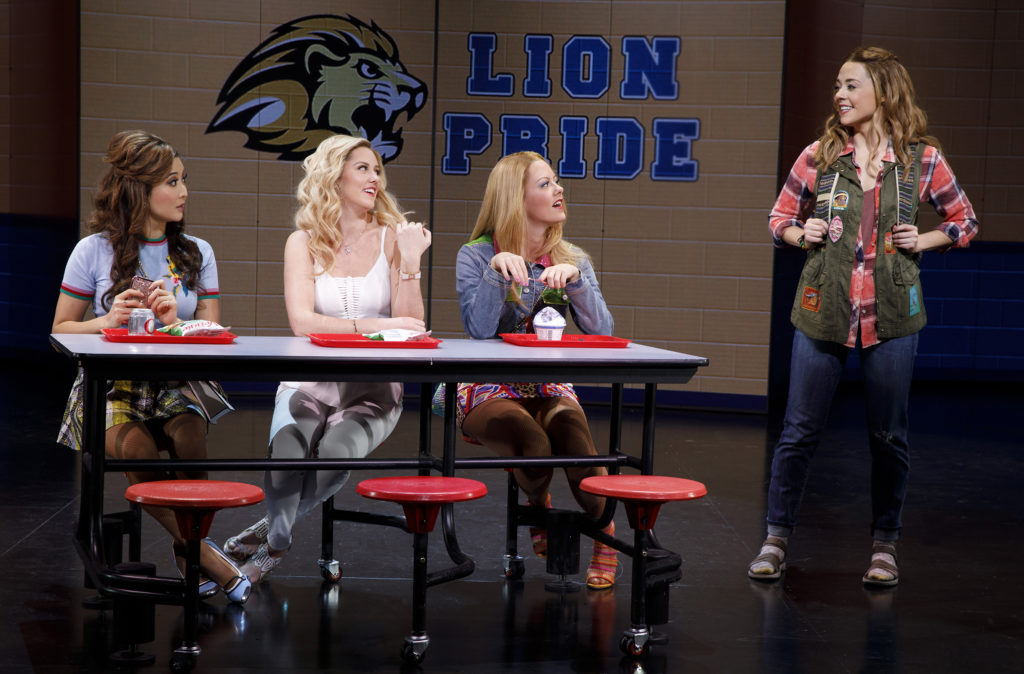 That experience, she adds, is also a bit strange, especially with her character Karen, who is riddled with insecurity. “But we all still carry a little bit of those insecurities with us every day,” said Park.

Though insecurity, and its evil twin, competitiveness, tend to be part and parcel of being a performer, this trio has flipped that paradigm, and they give much of the credit to their SMTD training. Park cites what she calls “the motto” for the Department of Musical Theatre as devised by former chair Brent Wagner: “You can’t move forward if you’re looking side to side.”

“It’s really about, ‘How can we lift each other up, how can we be nice girls, how can we make each other look good so that the whole thing looks good,’” said Park.

All three agree that “being a star” is not the goal. Louderman said she “hit a wall” after Bring It On, and came to realize that her goal was to focus her career on “finding fulfilling creative work, and finding other ways to find happiness outside of work.”

“A big thing our program taught us at SMTD was that you’ll be a better artist if you’re well-rounded, but you’ll also probably be a happier human,” said Henningsen.

The women find it delightful that the show is at the August Wilson Theatre, where the mega-celebration of Brent Wagner took place in 2015, in which all three performed.

They’re now eagerly looking forward to recording the original cast album for Mean Girls­—a major milestone—as they settle into the hard work of performing eight shows a week of a hit musical with no end in sight. But they’re not complaining.

“We’re back in high school with our college friends,” said Louderman. “Isn’t that the dream?”