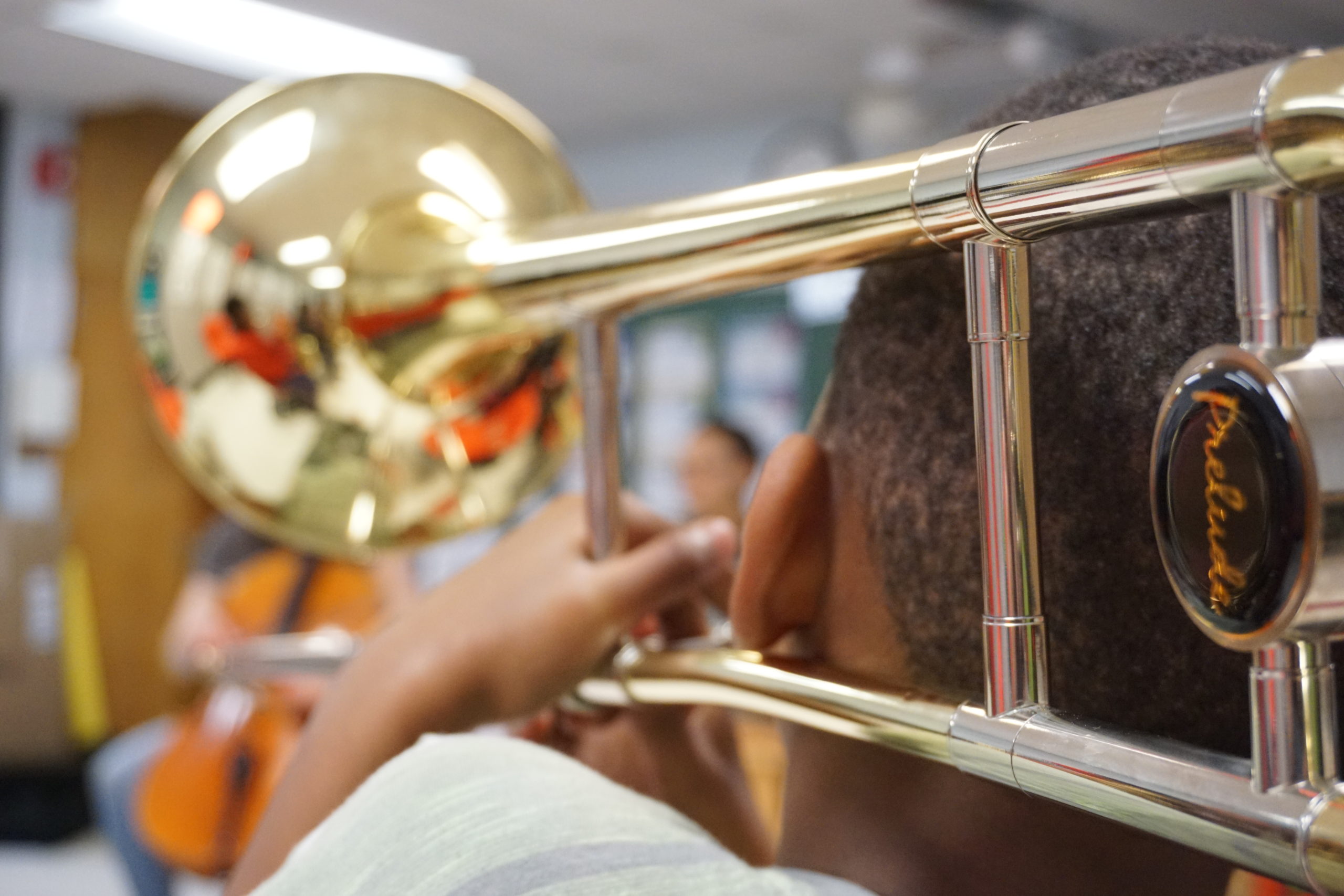 Learning Beyond the Classroom: Community Engagement with SMTD’s PEERs Program

The University of Michigan has long included public engagement in its educational mission, aiming to reinvest its resources in the communities it serves. Such engagement also contributes to the University’s Diversity, Equity and Inclusion (DEI) strategic plan by increasing awareness and access among underserved populations in the state of Michigan. At the same time, U-M students’ participation in community outreach is essential to the University’s goal of “developing leaders and citizens.” SMTD’s sponsorship of frequent public performances already make it one of U-M’s most outward-facing units, but many students seek to make more of an impact. “So many of our students seek to be ‘artist/citizens’ whose work makes a difference,” says SMTD Dean David Gier. “They can learn and grow through their interactions outside the curriculum in ways that are not possible through other means.”

Enter SMTD’s PEERs (Performance Engagement Educational Residencies) program. Now in its fourth academic year, the program provides mini-grants as well as logistical and programmatic support that allow SMTD students to partner with underserved communities throughout Michigan to create mutually beneficial arts experiences. Every project must include some element of performance and some element of education, and SMTD students must return to the community at least twice. The goal of the latter requirement is to encourage students to consider the longer-term implications of their work in the community, says Rikki Morrow-Spitzer, SMTD’s DEI coordinator. Students are not simply giving a single performance and leaving, but developing a sustained relationship that can grow and evolve over time.

Equally important to PEERs’ mission is the mutuality of each community partnership. The partnering organizations have their own culture, talent, and resources to contribute to each project. Often the only element they lack is access to and opportunities in the arts, which is precisely what SMTD students are able to provide. Meanwhile, the U-M students themselves learn that they can use their art to make a difference in the community, something Morrow-Spitzer calls an aha moment. “When the students forge that human connection and realize they can make an impact, it’s really special,” she says. “We really believe that our students are getting just as much as the community members” from their PEERs experiences.

That sentiment is echoed by Damien Crutcher, MM ’96 (conducting), the CEO of Crescendo Detroit, an after-school arts enrichment program in Northwest Detroit’s Dexter-Davison neighborhood. For the past two years, members of U-M’s Phi Mu Alpha (PMA) music fraternity have provided mentoring, music instruction, and inspiration to Crescendo’s students. “Having young, smart, talented musicians come to be role models for the kids is great,” Crutcher emphasizes, but he adds that the fraternity members also learned valuable lessons. “They quickly became comfortable coming into a place that doesn’t look like where they’re from,” he says, and soon discovered that “kids are kids. Building relationships with kids is the same everywhere.” The PEERs project leader, fraternity president Luis DaCosta, BM ’19 (trombone), agrees that working with the Crescendo kids dovetailed nicely with PMA’s mission of building character through music education. “We enjoyed sharing the lessons we learned throughout our lives, both in terms of character and music, and finding new ways to use our own backgrounds to help others,” DaCosta explains. 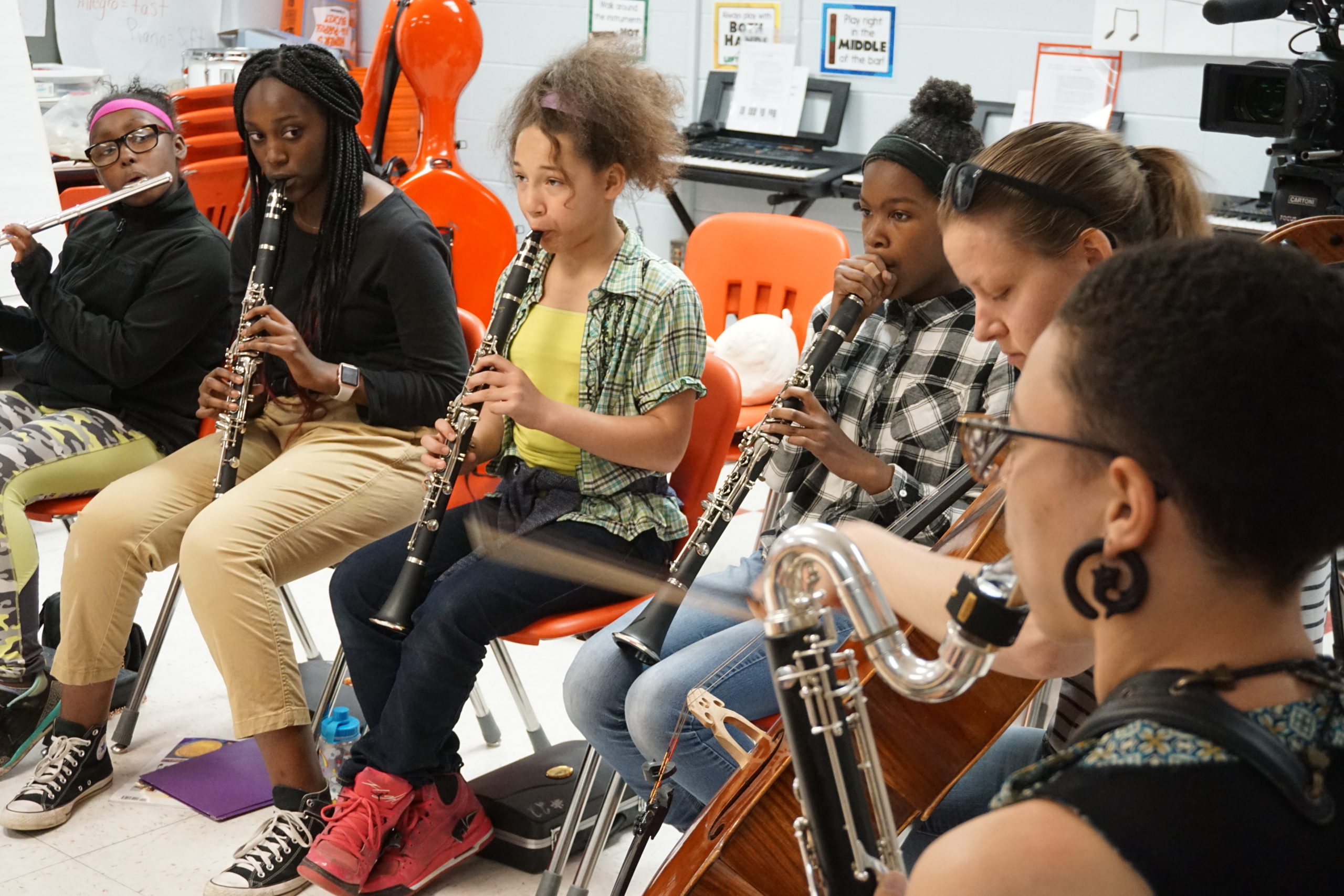 Participation in PEERs projects also led SMTD students to discover new things about their own art. Members of the all-female sextet Virago, composed of undergraduates Sofia Carbonara (percussion) and Ellen Sirower (piano), graduate student Megan Rohrer (violin), and alumnae Wesley Hornpetrie, MM ’15 (chamber music), MM ’15 (cello), SM ’18 (cello), BethAnne Kunert, MM ’19 (saxophone), MM ’19 (chamber music) and Kaleigh Wilder, MM ’19 (improvisation) on baritone saxophone and bass clarinet, led four free-improvisation workshops during Salina Gill-Bowie’s after-school band classes at Dailey Elementary School in Flint. “This workshop encouraged the students to expand their perception of what music is and how it could be created, developing a deeper understanding of how emotion can affect music,” says Gill-Bowie. “It definitely left a positive impact on my students and I am certain that they are becoming better musicians having had this experience.” Even as the members of Virago taught the children how to generate musical ideas, listen critically, and provide feedback to each other, the kids also inspired their PEERs mentors with their creativity and enthusiasm. “It really helped us to reflect on why we improvise,” says Kunert. “It was amazing to hear what the students were coming up with—they really took what we were offering and ran with it. It was more rewarding than we ever thought it could be.”

PEERs began in the 2016–17 school year with a three-year grant from the U-M Provost’s Office. After a year spent developing the program from scratch, PEERs funded 17 projects in the second year and 14 in the third, defraying the costs of travel, materials, marketing, and other expenses. In the current year—its fourth—the program is relying on the internal SMTD DEI budget, but the hope is to fund a similar number of projects by providing smaller direct awards and helping students locate additional funding through other sources. PEERs itself sponsors four application cycles throughout the academic year, each evaluated by a rotating committee of seven SMTD faculty and staff members representing a diverse range of art forms.

In addition to monetary support, the SMTD DEI office provides guidance to students during the entire process, from the initial application to the development and implementation of the project. “Rikki was really helpful in navigating the logistical side of things but also in developing a repertoire and plan for our visits,” says DaCosta. Each application must also designate a faculty sponsor, and these sponsors often continue to mentor their students throughout the project’s lifespan.

All PEERs participants receive training about how to respectfully and ethically enter, engage with, and exit a community. For Virago’s members, this workshop led to conversations about how to present improvisation to the students. “This band program had its own life already, and we’re just coming in to offer a different option, a different way of playing that is no better or worse than what they already do,” Kunert says.

Many students approach Morrow-Spitzer with fully formed projects in mind, and simply need help making them a reality, she says: “Sometimes a student walks in with ideas about how to use the funding that we had never even thought about!”  However, for those who have only a vague sense of what their project could be, Morrow-Spitzer works with colleagues at U-M’s Center for Educational Outreach and the Edward Ginsberg Center for Community Service and Learning to locate potential community partners. “We care a lot about who we partner our students with and it being the right fit for both sides,” Morrow-Spitzer adds.

Undergraduate directing major Sam Estrella knew that her PEERs project would dramatize the children’s book Chrysanthemum to encourage literacy and engagement, but she relied on Morrow-Spitzer’s help to find community partners. The Ginsberg Center connected Estrella with the Community Family Life Center Youth Enrichment Program in Ypsilanti, where she spent four weeks developing and rehearsing the play with children aged 7 to 12. “None of them had really done anything with the performing arts before, so the whole idea was foreign to them,” Estrella says. “A lot of these kids had to grow up faster than most because of their environment, so it was exciting to see them discover how fun it can be to play pretend and be someone other than yourself for a while.” The decidedly inexperienced actors caused some challenges for the production, which received technical assistance from undergraduate Bri Reed (design & production). Even so, the final performances in front of kindergarteners and first-graders at Ypsilanti’s Pittsfield Elementary School still made an impact. “A lot of the kids came up to me afterward and said how great it was,” says Estrella. “It really reminded me how important these programs can be.” 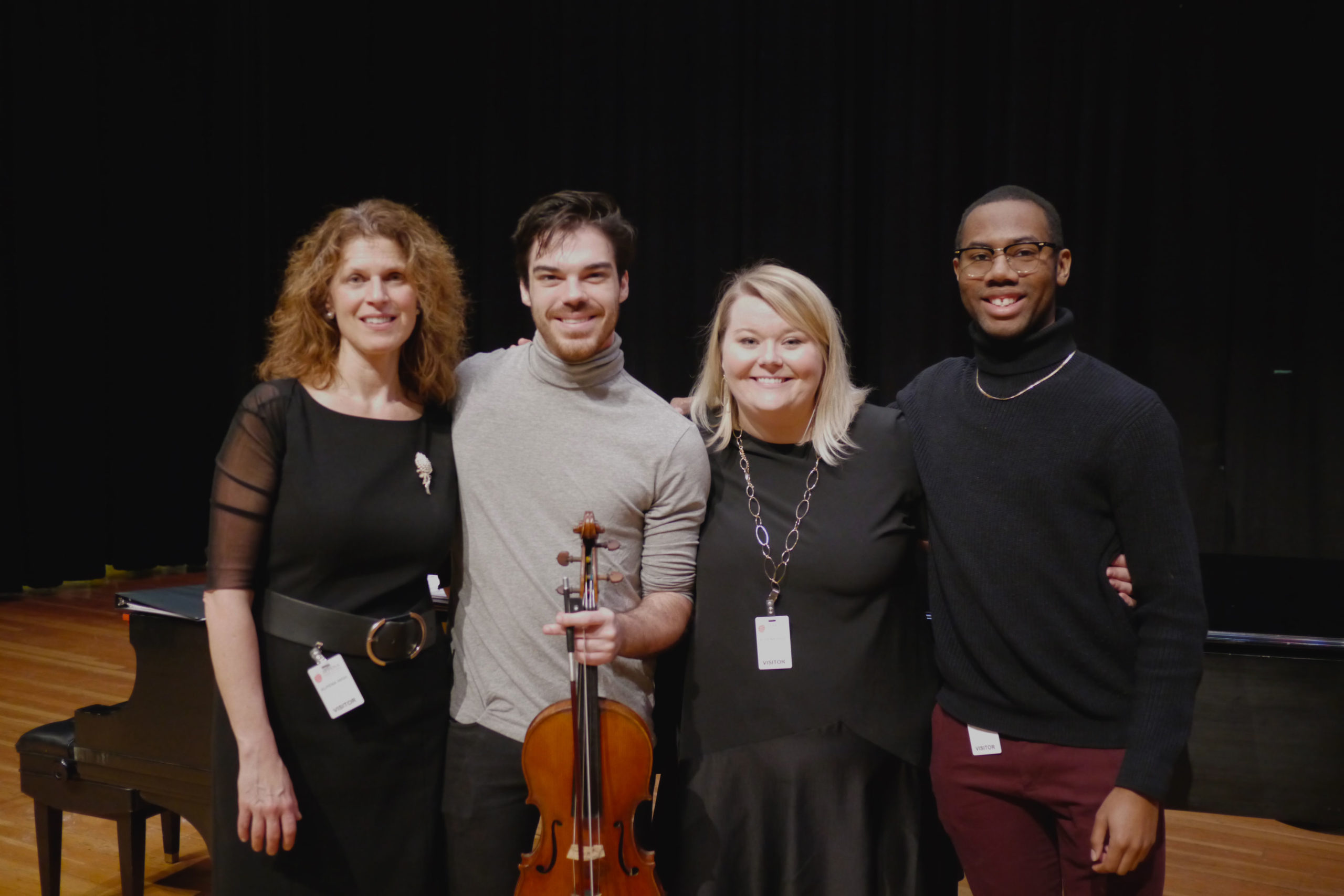 For doctoral student Elise Eden, MM ’18 (voice), the choice of community was simple: her hometown. The northern Michigan community of Alpena, where more than half of families live below the poverty line and the opioid crisis is in full effect, has seen multiple cuts to arts funding in recent years. Eden says that the sacrifices her parents made to allow her to pursue music enabled her to gain an education and escape the cycle of poverty, and she was eager to pay it forward to others in her community. In each of the last two years, she has used PEERs funding to travel back to Alpena and provide workshops and performances to inspire others. She went by herself the first year, but for the second iteration of the project, she was able to bring another vocalist,  music education junior Jack Williams III, and a violist, Sam Koeppe, BM ’18 (viola) as well as SMTD staff accompanist Kathryn Goodson, MM ’89, DMA ‘05 (collaborative piano). Each concert was a huge event in the community, with packed audiences and coverage by the local newspaper. More important for Eden, however, was the reaction from local kids. “They were on the edge of their seats, and almost fighting with each other for the chance to work with us,” Eden exclaims. “Music is so important, but having someone believe in you can really make a difference in your life.”

As the PEERs program continues to develop, Gier would like to see it grow deeper roots within SMTD, connecting to other programs that do similar work such as the Department of Music Education and the Office of Engagement & Outreach. He also envisions more partnerships with faculty who are interested in providing their students with opportunities to take classroom lessons out into the real world. “To truly be among the Leaders and Best,” he says, “you have to get out of the classroom.”

← Connecting Through Theatre Why Awards Matter →