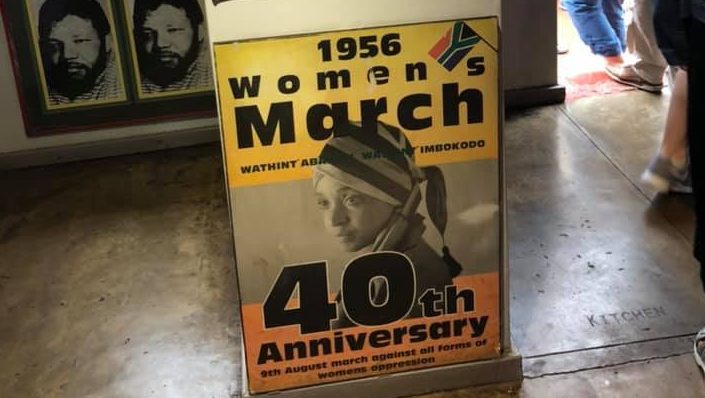 Story and Photos By Eli Rallo

A LIFE-CHANGING TRIP TO SOUTH AFRICA

In early March 2019, 10 SMTD students traveled to Johannesburg, South Africa for a cultural immersion experience at the Market Theatre and Laboratory as well as other local theatres. Professor Anita Gonzalez (theatre and dance) led the trip, accompanied by Associate Professor Christina Traister (theatre) and Rachel Francisco, SMTD’s special events producer. The students were sophomore and junior theatre majors (one directing, six acting, and two Bachelor of Theatre Arts [BTA] candidates) and one graduate student in dance. Sponsored by SMTD, the trip also received support from the African Studies Center, the Department of Dance, and the Office of the Provost.

Eli Rallo, a BTA student who was on the trip, reflected on the experience: 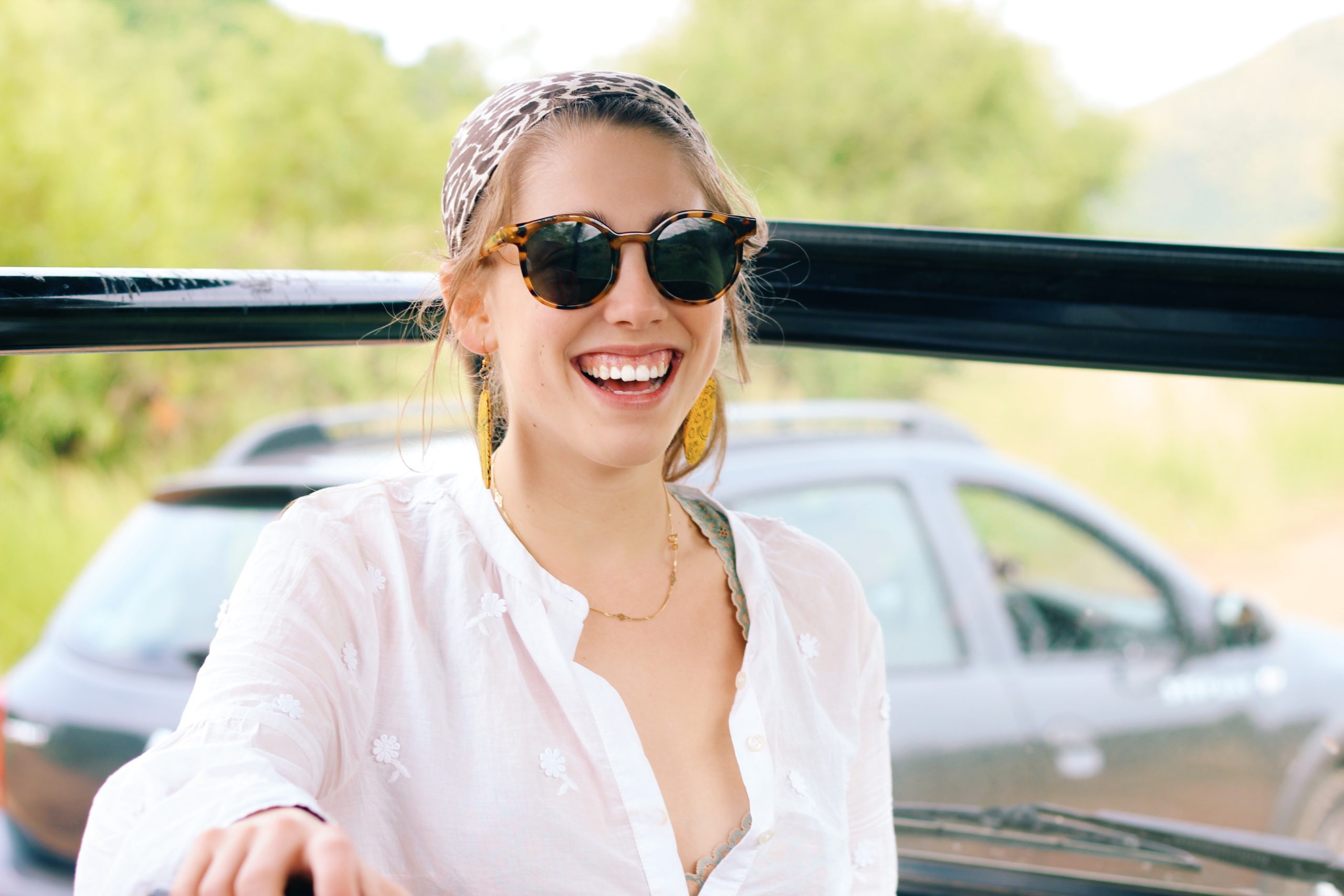 I never thought I’d travel to Africa before being selected for this trip—it didn’t ever seem feasible. But the University of Michigan always surprises, impresses, and gives to us, with the hope that we’ll give back. South Africa went from a place I acknowledged, to an idea, to a plan, to a place I now hope I’ll return to and perhaps live in one day. Before the trip, the 10 of us all knew one another from the tight-knit community within SMTD. The dynamic before we left was amiable, but none of us were really best friends. That worked to our advantage, giving us a chance to get to know one another quickly once we arrived in Johannesburg.

As we left the airport and the dewy air hit my face, I’m not sure why, exactly, but tears came to my eyes. I was overwhelmed, trying to take a mental picture of my first impression of this new and strange place, trying to remember the feeling of arriving there forever. The air smelled different, the sky felt closer, the sun, naturally, felt hotter. I’d never been somewhere so far from home—so different, yet so similar. The first night we had dinner on our hotel’s rooftop, our first South African meal: a plate of well-seasoned peri peri chicken and crispy hot chips. We also had our first of many interactions with local South Africans who shared common misconceptions about America. There aren’t many Americans in South Africa, which led to many stares and strange interactions. That first night, eating dinner, two kind South African men asked if we were American, and when we said yes, they began to talk to us about how rich and expensive America is, and how they assumed all Americans are extremely wealthy and established.

We were surprised to find that so many South Africans grouped all Americans into a cohort of rich, elitist, city dwellers who are in the habit of appropriation and stereotypical behavior. The stereotype does stem from some truth, in terms of what America presents on the exterior and in the media. However, it became one of our goals on the trip to prove to everyone we met that although we’re different from the people of South Africa, we’re really not so different at all. We bridged those gaps through art and conversation. 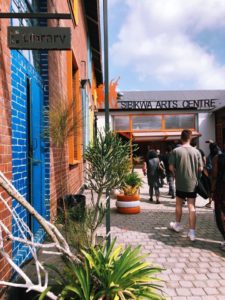 Our program visited many different theatres in Johannesburg, but the bulk of our time was spent with the Market Theatre and Laboratory. The Market Theatre opened just around the time of the Soweto Riots to dismantle apartheid in 1976. It is known as South Africa’s “Theatre of the Struggle,” because during the days of harsh laws enforcing segregation, the theatre was a gathering hot-spot for everyone. Before and after shows audience members could talk and connect, finding similarities and light within the darkness. The establishment challenged apartheid with the idea that culture can fight oppression, and that art is an important allied force. Today, the Market Theatre operates under identical values as it did on opening day, and has expanded to include a photography school, educational facilities, the Windybrow
Arts Center, and Kwasha, an advanced acting troupe.

Though the vast majority of our schedule consisted of workshops and hands-on activities, we found the most magic in the discussions we had with the incredible people we were able to meet. So much of our time in Africa was spent convening and sharing in a productive way to bridge gaps and make connections. That is one of the many valuable lessons I took from the experience: connection.

We listened to the new people in our lives to listen, not just so that we could respond. We challenged hard topics and dense barriers, made sense of culture, and wondered how that played into the art we create. There are stark differences in the way we view the world, in the way we create, in the way we communicate. But something held true: we are all using our bodies and our minds to tell stories. And we are all telling stories to understand human connection—where we live, how we feel, who we are. 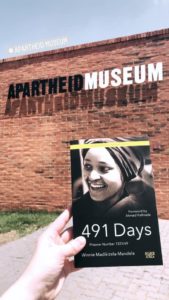 Much of South African theatre is centered on social justice work—rightfully so, because they only just abolished the apartheid system around 25 years ago, and have been working to rebuild and re-establish the country ever since. South Africans spend every single day remembering apartheid and recognizing that it happened, so as to productively move forward with a spirit of reflection and remembrance. We noticed, as Americans, that there are so many parallels between apartheid and both American slavery and modern discrimination. The difference is in the way we handle and recall these things. America likes to pretend that these dark periods never happened or weren’t as severe as they really were and are. South Africans don’t let a day go by where they don’t lean on their new constitution to reflect and rebuild. We could all learn something from South Africa.

On the last day of our trip, we sat around a table on the same rooftop as our first night there, but I think most of us could sense some change from within. As we spoke about what we learned as a group, tears began to roll down my cheeks. And I worry about sounding cliché when I say this, and I’m also aware of what an immense privilege it was to be able to travel so far from home to understand theatre in a new light, but I do believe that the experience of seeing this new place changed me in some way. Maybe it’s a perspective switch, maybe I learned to listen, maybe I learned about who I am, or would like to be.

We marveled at the paradigms for safe, productive creation and South Africans’ unending spirit, both in protest and in silence. We wondered if all it takes is youth to spark a forest fire. We talked about our ancient constitution, and how much more productive a place seems when they have a constitution that’s new.

South Africa is a place of beautiful, progressive ideals. It is a place of fresh air and hot chips and orange sun and so much breathtaking theatre. It is a place that I’ll forever be indebted to SMTD for giving me the opportunity to see. I sincerely hope that one day I’ll return.

← Belle Isle and Beyond Learning Beyond the Classroom: Community Engagement with SMTD's PEERs Program →