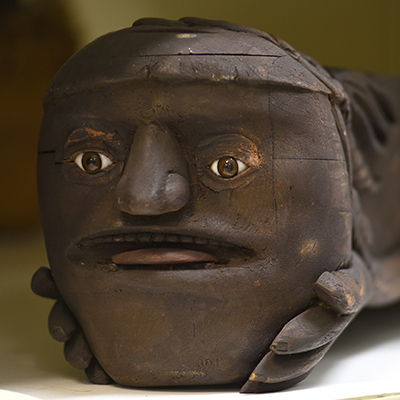 Hands-On Experience with the Stearns Collection of Musical Instruments 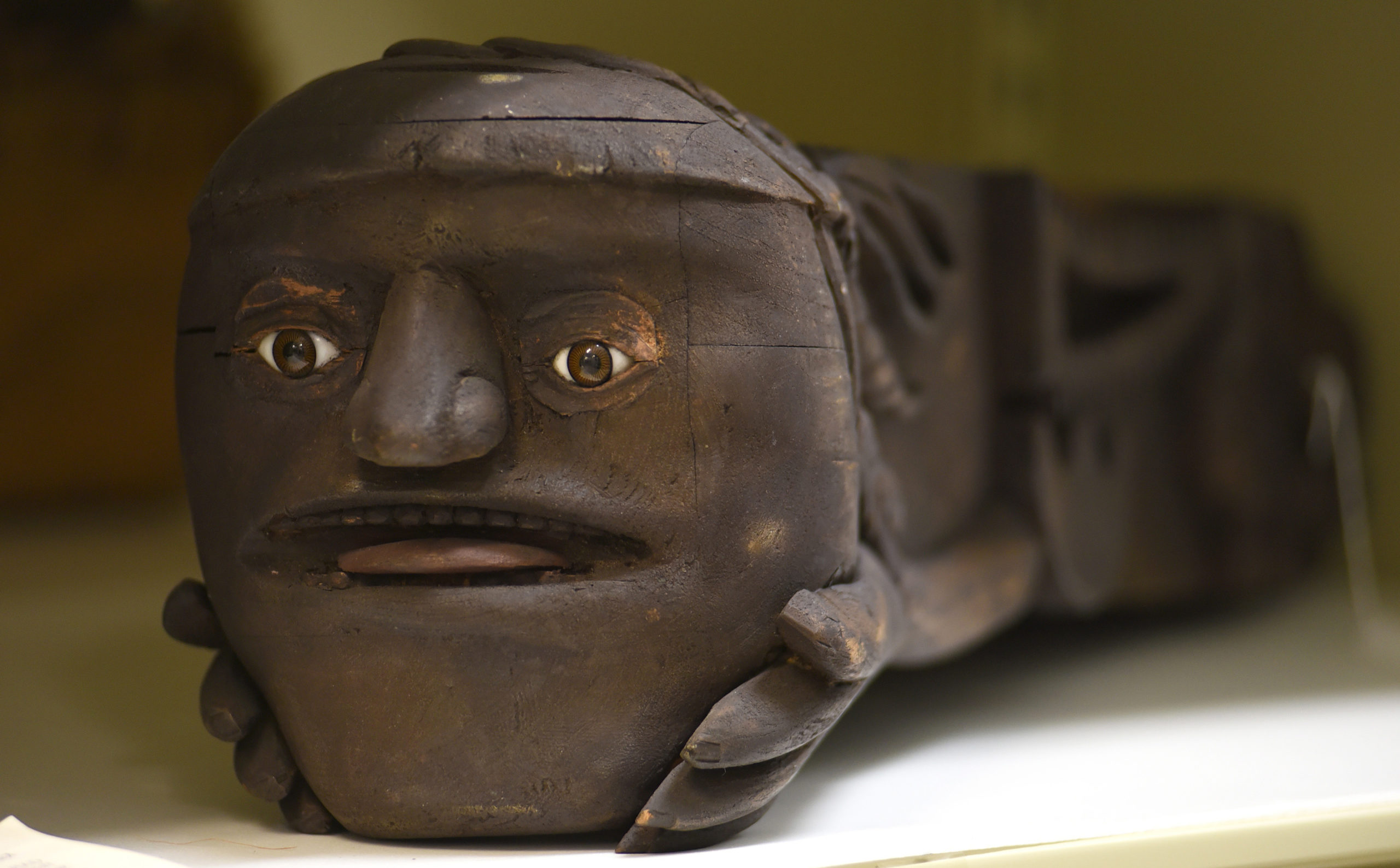 Deep in the heart of U-M’s North Campus Research Complex (NCRC), the students of Musicology 406/506, “Musical Instruments of the World,” are hard at work. After weeks of classroom lectures, they are excited to gain hands-on experience with SMTD’s Stearns Collection of Musical Instruments.

The workroom is a flurry of activity as students pick pieces for an upcoming exhibit at Hill Auditorium. On one side, two students take careful measurements of an ornate Baroque sackbut, a trombone predecessor, for their exhibit of historical European wind instruments. On the other, three students working on a collection of free reed instruments examine a 19th-century harmonium. They wonder how one musician could both play the keyboard and compress the bellows to produce sound, but a quick Internet search reveals that it once had a foot pedal for the bellows. In the center of the room, two students sift through a number of instruments constructed from bamboo or gourd. They want to focus on pieces from the Global South, but enter into a brief debate about whether to expand their geographic parameters in order to include a Japanese notch flute, the instrument of choice for samurai warriors. Meanwhile, the first group has finished with the sackbut, and one student carries it away to the storeroom. Minutes later he returns with a large early tuba. “Is that the right one?” his partner asks. “It looks so different from the photo online!” 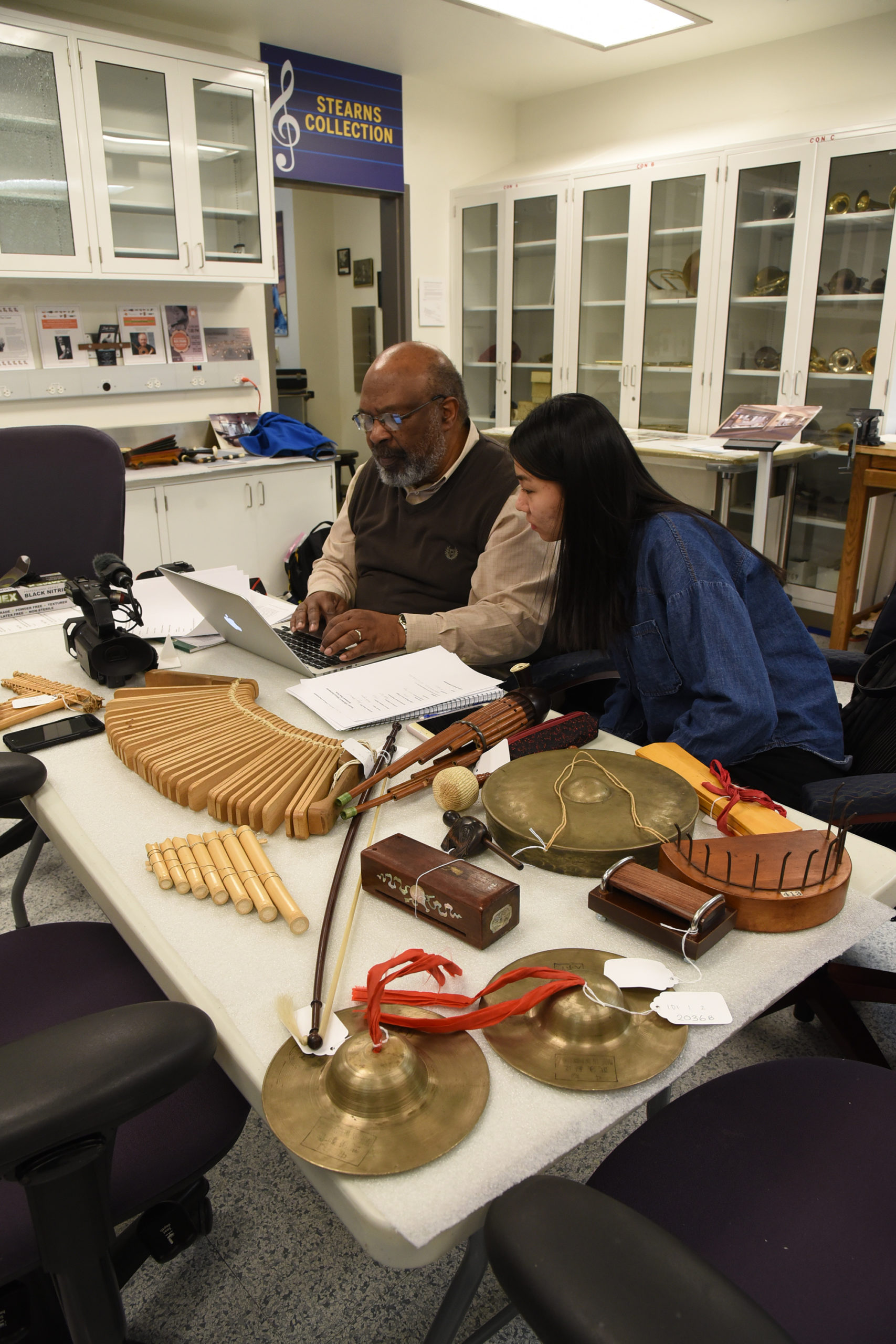 Such a scene would not have been possible just a few short years ago. When Lester Monts, Arthur F. Thurnau Professor of Music in the Department of Musicology, took over as director of the Stearns Collection in 2016, it was housed in the Argus Building and was largely inaccessible, even to SMTD faculty and students. Creating the new facility at NCRC was a cornerstone of Monts’s mission to more fully integrate the collection into the teaching and research missions of the School. As part of that goal, he revived the “Musical Instruments of the World” course in Winter 2018 after it had not been taught at SMTD for more than 30 years.

Monts said that since the collection was relocated to NCRC last spring, more faculty and students have used it than at any point in its long history, which began more than a century ago. The Stearns Collection originated with an 1899 donation by local businessman Frederick Stearns (1831–1907) of 940 instruments he collected over the course of a lifetime. In 1914, the collection was displayed in the lobby areas of Hill Auditorium, and remained there for six decades until most of the instruments were removed to storage. The collection continued to grow, thanks to donations large and small, including a significant collection of African instruments gifted by Leo Sarkisian, a longtime broadcaster on the Voice of America radio program, whose work took him around the world. Now with over 3,500 individual pieces, the Stearns Collection is one of the most diverse musical instrument collections on any university campus in the country.

The new facility at the NCRC covers over 5,000 square feet, including several large rooms filled with floor-to-ceiling shelving. The storage spaces were configured by Ted Lottman, a local designer who specializes in musical instrument display and has worked with Stearns for several decades. Instruments are sorted by the way they produce sound – membranophones (drums), aerophones (winds), chordophones (strings), and so forth – and then tagged and numbered, so any given instrument can be located in a matter of minutes.

“I can’t say enough about the new facility,” enthused Carol Stepanchuk, who oversees outreach and special projects for the collection. Because she approaches the instruments from the point of view of an art historian and anthropologist rather than a musician, she appreciates how the display shelves allow for close study of even the most delicate items, including those that have come apart in the centuries since they were constructed. “There are many different uses for the collection, and the display needs to speak to all of them,” she said. 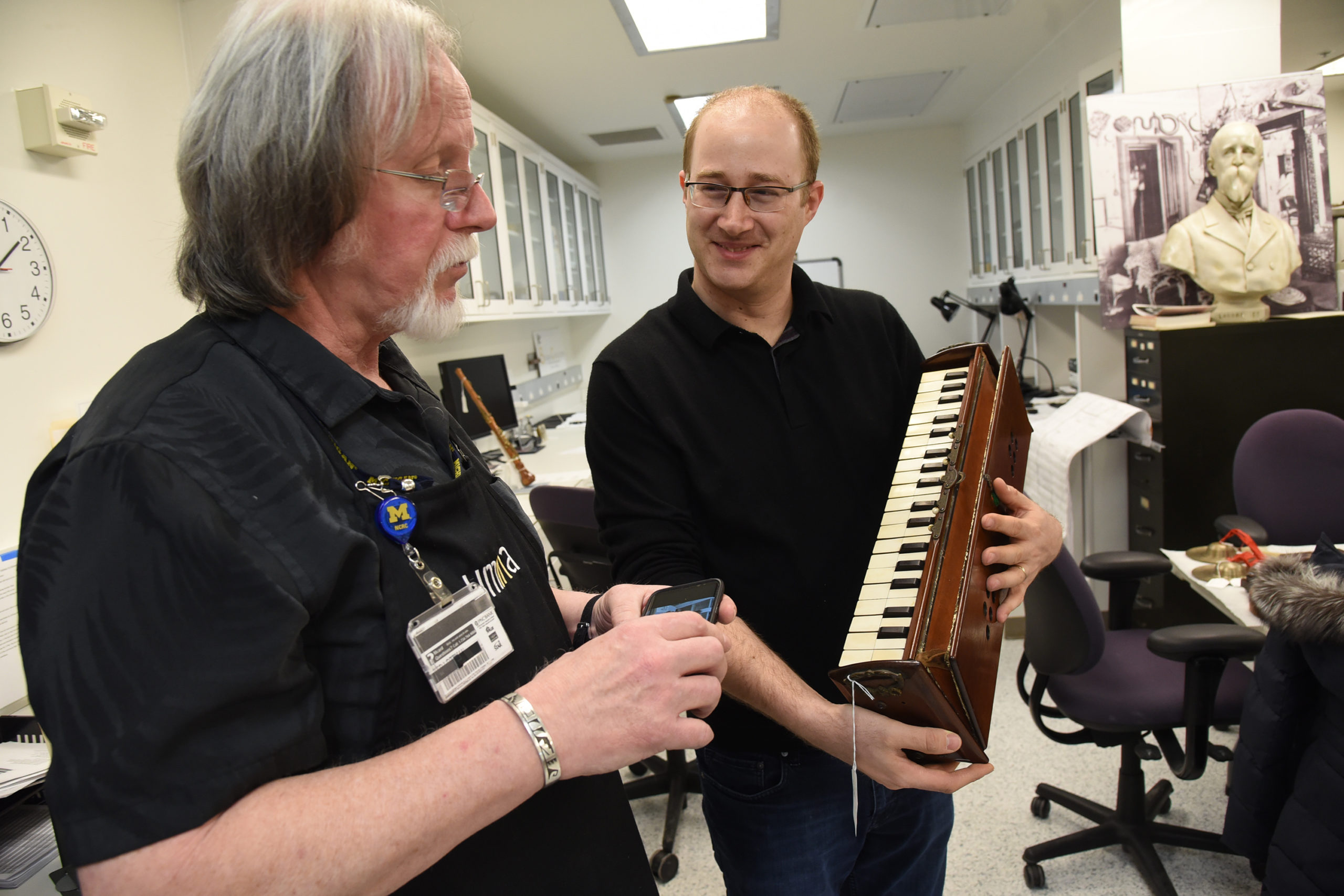 Ted Lottman, the Stearns Collection manager, and Rotem Weinberg, a graduate student in conducting, with a harmonium.

Of course, the pieces in the collection are not simply historical artifacts or objects of art – they are musical instruments, many of them still playable. While the SMTD website has long featured a searchable database for the collection, Stepanchuk emphasized that she wants faculty and students to use the instruments as interactive teaching tools. Having a more accessible facility makes that possible, as Monts notes: “The new space opens the doors for many of our initiatives.”

Among faculty who have taken advantage of the Stearns Collection’s resources is Joseph Gascho, assistant professor of harpsichord, who has revived SMTD’s early music program since joining the faculty in 2014. His students frequently borrow both historical and reproduction instruments to enhance their understanding and experience of performing Renaissance, Baroque, and Classical music. “The Stearns Collection has become a vital part of many SMTD students’ education,” says Gascho. “Instrumentalists who study and perform on brass, wind, and string instruments develop a new sense of sound and a tactile experience that transcends any theoretical knowledge. Singers in opera, choirs, and chamber ensembles also benefit greatly from working with such instruments.” In all, Gascho estimates that at least 20 SMTD concerts each year feature instruments from the collection.

On the other end of the historical spectrum, Performing Arts Technology (PAT) students can learn from the electronic synthesizers housed in the collection, including two mid-century instruments by rival companies Moog and Buchla. PAT assistant professor John Granzow said that his students always let out a gasp of excitement when they see these rare treasures. The wide range of acoustic instruments in the collection is also extremely useful to PAT students. “The collection is a vast laboratory of materials formed to fashion sound from numerous musical traditions, cultures, and time periods,” he says. “There is no better way to expand one’s notion of music technology than to walk into a musical instrument collection like Stearns.” 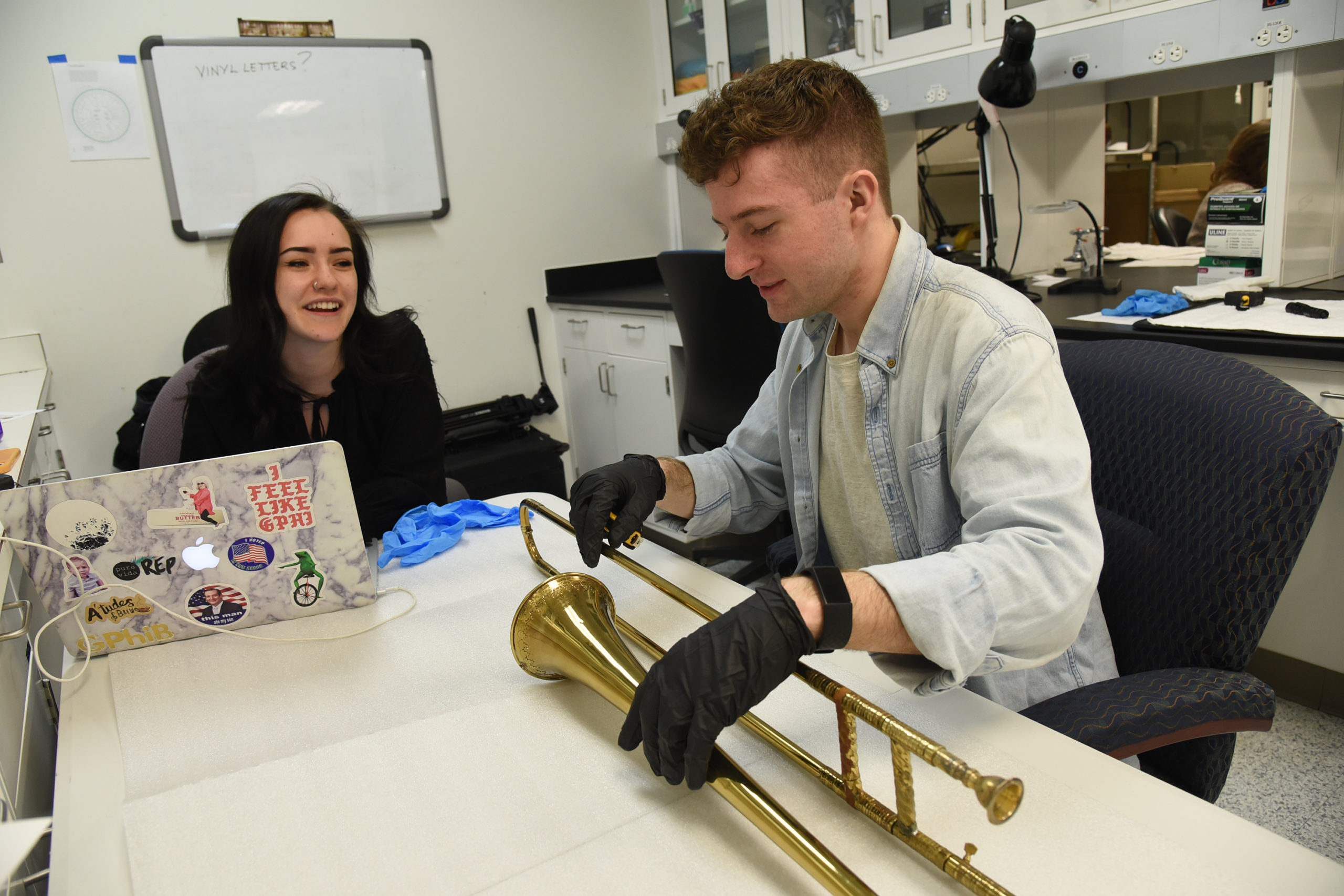 The Stearns Collection also supports the research and teaching objectives of SMTD through the Virginia Martin Howard Lecture Series, which hosts specialists in musicology and organology (the study of musical instruments) for lecture-demonstrations on a variety of instruments from around the world. The gatherings are open to the public and are typically small enough to allow for close-up viewing of the instruments under discussion. Recent guests have included local groups, such as the Dodworth Saxhorn Band (which plays a brass instrument typical in Civil War-era military bands) and the National Arab Orchestra (which performs classical and contemporary Arab music using a combination of Arab and Western instruments), as well as nationally known scholars like Laurence Libin, the emeritus curator of musical instruments for the Metropolitan Museum of Art in New York City.

As a teaching tool, the Stearns Collection is invaluable, and it is also well known to researchers around the world. Monts has attended organological conferences as far away as Scotland, Portugal, and China, and experts everywhere recognize and respect the Stearns name. International researchers frequently visit Ann Arbor to study the collection’s holdings; most recently a researcher from New Zealand came to take careful measurements of a rare recorder. In addition, pieces from the collection are sometimes lent to museums. This year, a mechanical mouth organ joined the exhibit “Robots Love Music” at the Museum Speelklok in Utrecht, the Netherlands.

Closer to home, instruments from the Stearns collection are frequently on display throughout Ann Arbor. In addition to exhibits in SMTD’s own Earl V. Moore building, temporary exhibits have appeared at the U-M Hospital and the Ann Arbor District Library, as well as at Hill Auditorium, where the students from the “Musical Instruments of the World” course will install their work later this spring. There is also an exhibition space at NCRC that Stepanchuk said will allow for additional temporary installations.

As Monts prepares to retire, he hopes to secure enough funding for the collection to hire a permanent director/curator, and perhaps even a full-time conservator to restore and protect these invaluable treasures. He would also love to bring in guest curators to design exhibits around some of the rarer pieces. “This collection has tremendous potential to serve the needs of the School of Music, Theatre & Dance for years to come, whether we’re talking about early music and European chamber music, or the work we do in ethnomusicology that represents the rest of the world,” Monts said. The new facility at NCRC is only the first step in what promises to be an exciting renaissance for the Stearns Collection at SMTD.

For more information about the Stearns collection, and for a listing of upcoming events and exhibits, visit the Stearns Collection page.