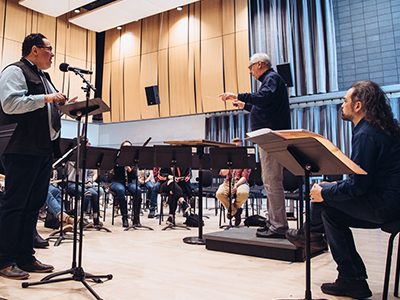 Erik Santos, professor of composition and performing arts technology, was named the winner of the 2020 American Bandmasters Association Sousa-ABA-Ostwald Award for his composition The Seer. Commissioned and conducted by Professor Michael Haithcock for the Symphony Band and tenor soloist Professor Scott Piper, the work received its world premiere at Hill Auditorium on March 15, 2019.

“I’m thrilled and humbled to be acknowledged by the American Bandmasters Association. I’ve also been very moved by the congratulations from friends, students, colleagues, collaborators, and family,” said Santos. “While composing, one loses oneself in the work, so that afterward, it almost feels like ‘wow, who wrote this?’ and then, receiving praise can also feel very strange—’who… me?’ If I wasn’t working with such supportive collaborators, who wanted to share the work with the world, I might just move on to the next project, so I am indebted to them for their enthusiasm and encouragement to enter The Seer in this prestigious contest!”

As part of the award, Santos will receive a $5,000 cash prize and his work will be performed by the United States Marine Band, under the direction of Col. Jason K. Fettig, at the 2022 ABA Convention in Indianapolis, IN.

“It’s an honor to have the U.S. Marine Band, with so many SMTD alums among its members,  perform The Seer,” said Santos. “I don’t know how their experience as Marines will connect with the music and thoughts of The Seer, but, if I’ve done my job as a composer, to tap into the ‘universal language’ of music and the deeper questions of being alive, I would hope that each human can relate to the sounds and meanings in their own way. I am excited to imagine what other unforeseen interpretations might awaken when the U.S. Marines pour their souls into this music.”

The origins of The Seer date back to the winter of 2015. Professor Haithcock attended a graduate vocal recital by Lonnie Reed, who was performing a song-cycle of Santos’s based on the poetry of Langston Hughes.

“I found Erik’s work particularly beautiful and moving, and after Lonnie’s recital, I approached Erik about arranging the song-cycle for the Symphony Band in hopes that Scott [Piper] would sing the premiere of that version,” said Haithcock. “I had previously worked with Scott and enjoyed the artistry of his voice and his passion in the rehearsals on a recording of Dialogue of Self and Soul by James Stephenson. After some consideration, Erik came back with the idea of writing a new piece based on the poetry of Langston Hughes featuring Scott as the soloist.”

Haithcock told Santos to write whatever he wanted to with no restrictions. As he worked out the details of the commission, Haithcock waited on Erik to follow his muse and creative process. “After receiving the score in the 2018 fall term, I told my doctoral students to ‘hold onto their hats’ because working on this piece was going to be a terrific experience from day one,” said Haithcock.

The Seer melded the poetry of Langston Hughes with Santos’s own imagination and creativity. He first encountered Hughes’s words when he was a sophomore in college, but his poetry took root when he worked on the composition Dreamer: 7 Poems of Langston Hughes with tenor SMTD alumni Darryl Taylor (MM ’91, DMA ’95, voice) and harpist Patricia Terry-Ross (BM ’68, MM ’69, music education).

“Hughes wrote many poems that were descriptive of music and music culture or even meant to be sung or read to music, so I often felt I could hear music inside and around his words, even when they were not in any obvious meter or rhyme scheme,” said Santos. “In The Seer, I wove together poems that were deeply philosophical, animal, evangelical, personal, and liminal. These poems might be shouted by a sideshow barker, spoken from a pulpit, ranted madly on a street corner, whispered in an empty hallway in an empty building, intoned alone in a submarine or spaceship, howled from a belltower, or growled from the gut. All of those voices spoke to me.”

As a BIPOC vocalist who has forged his career in the canon of European vocal art and operatic repertoire, Professor Piper was attracted to The Seer on multiple levels. He was enthralled by the opportunity to take part in a new work based primarily on Hughes’s poetry.

“At 15 years of age, I stumbled upon an anthology that contained a biographical sketch of Langston Hughes and some of his poetry at a local bookstore. As I poured over Hughes’s words and verbal imagery, I found myself being transported into a world that spoke of my own heritage,” said Piper. “I was taught about the broader struggles that spoke to issues beyond my immediate personal experience, and I felt inspired by the example of a man who transcended personal circumstances to give voice to the truth of his and his community’s life experience.”

Another reason for Piper’s enthusiasm around the project was the variety of vocal effects that The Seer demands of the singer. He found those challenges to be thrilling and deeply gratifying to explore, especially with his SMTD colleagues.

“It was an honor to work with Erik, who blessed me with the opportunity to be a witness to the birth of this incredible work and how he treats the text with such generosity of spirit and compassion—he is so conscientious to the words, the sentiment, and the spirit of the text that in the end, the only voice one truly hears in the performance is that of the poets themselves,” said Piper. “Working with the Symphony Band was a dream because Michael ran a brilliant and efficient rehearsal process. From the very beginning, the beauty of the project was routinely manifested in the growth that we all made from one rehearsal to the next.” 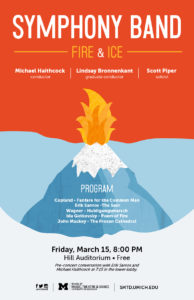 The collaborative process of The Seer was self-evident in the rehearsal process as the three colleagues worked together to help the piece take its final shape. “Erik’s constant expressions of gratitude for the players’ efforts and delight in what he was hearing made it easy for everyone to dig into the challenges and opportunities that the piece presented,” said Haithcock. “Scott’s constant smile and boisterous laugh also helped to create a relaxed and truly collaborative atmosphere.”

“Everyone seemed to understand and resonate with my visions and passions, and their natural enthusiasm encouraged me at every step, even when I was asking them to do things that were challenging or atypical,” said Santos. “Each person gave their all to the rehearsals and the performance, and I probably have a story for all that were involved in the project, but suffice it to say, I was so impressed, and felt like the collaborative energy lifted me up, and emboldened me to do my best, to have the courage to create something new. Just listen to that phenomenal premiere performance—powerful from its loudest exhortations to its tiniest whispers.”