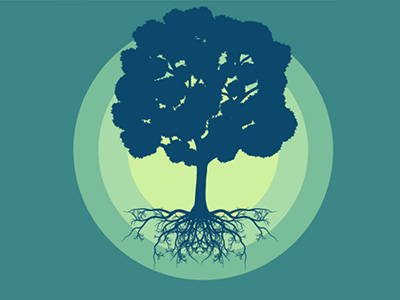 In the summer of 2019, Michael Haithcock, director of university bands and Arthur F. Thurnau Professor of Music, commissioned U-M alumnus Evan Hause to compose a new work to be premiered by the Symphony Band. Branching, A Tree Symphony, premiered at Hill Auditorium in November 2021. 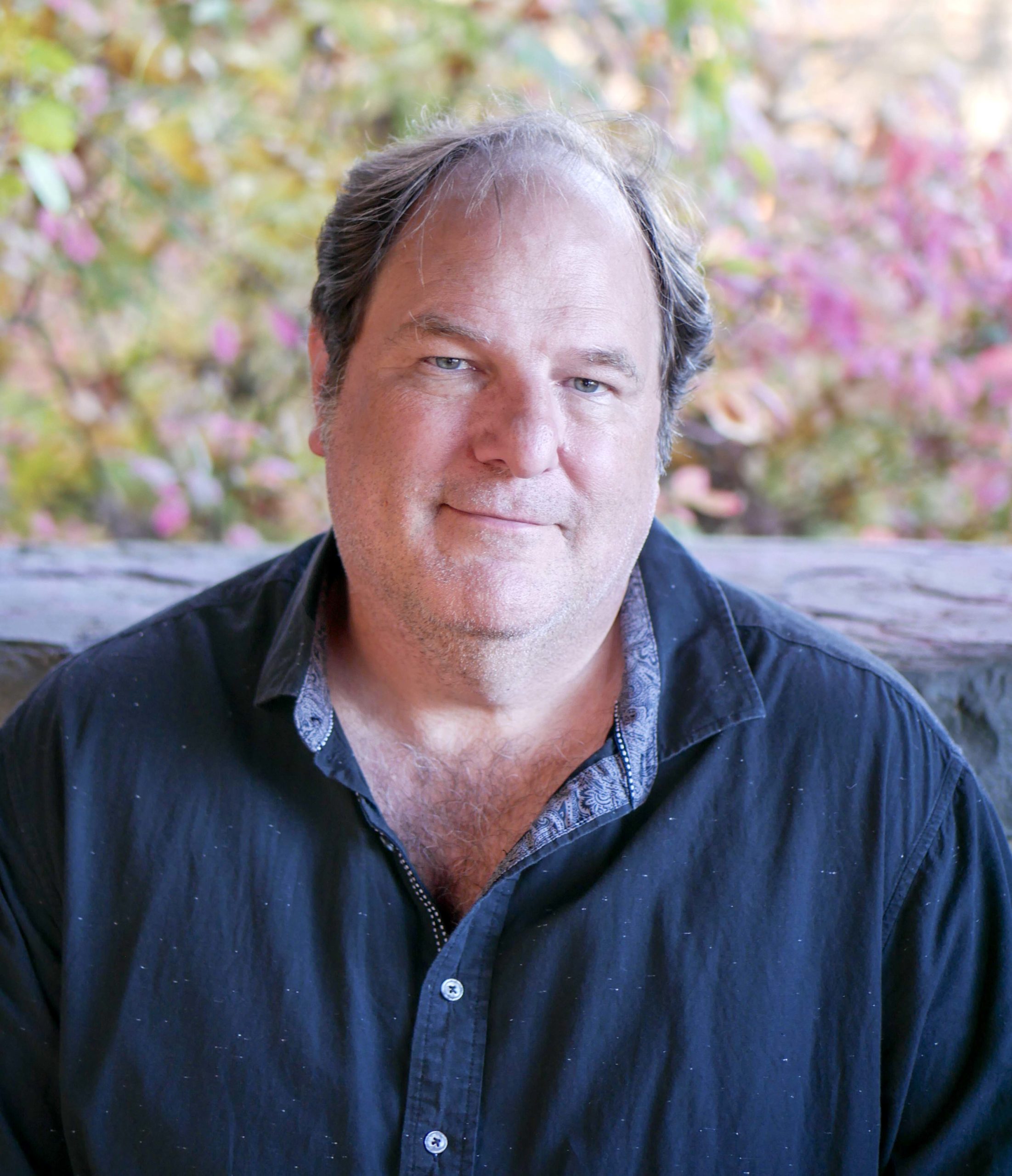 In composing this work, Hause, who was born in 1967 on what would become Earth Day, was inspired by the award-winning Richard Powers novel The Overstory and a longstanding passion for nature and ecology. He created a four-movement work rich in the symbolism and imagery of trees, which he described in the concert program notes as “the mighty sentinels of our Earth.” The titles of the movements represent various parts of a tree as it moves through various stages of its life. “Seeding” and “Taproot” are the first two movements. “Both are concerned with origins,” he wrote, representing “creation or birth at the cellular level [and] the mystery of a seed gaining purchase in the ground until it is capable of growing.” The third movement is “Branching,” and the fourth, “Flowering.” Describing that final movement, Hause wrote, “our large tree lives for decades or centuries. Here we find it in beautiful repose, a watcher in the forest and home to innumerable forms of life.” 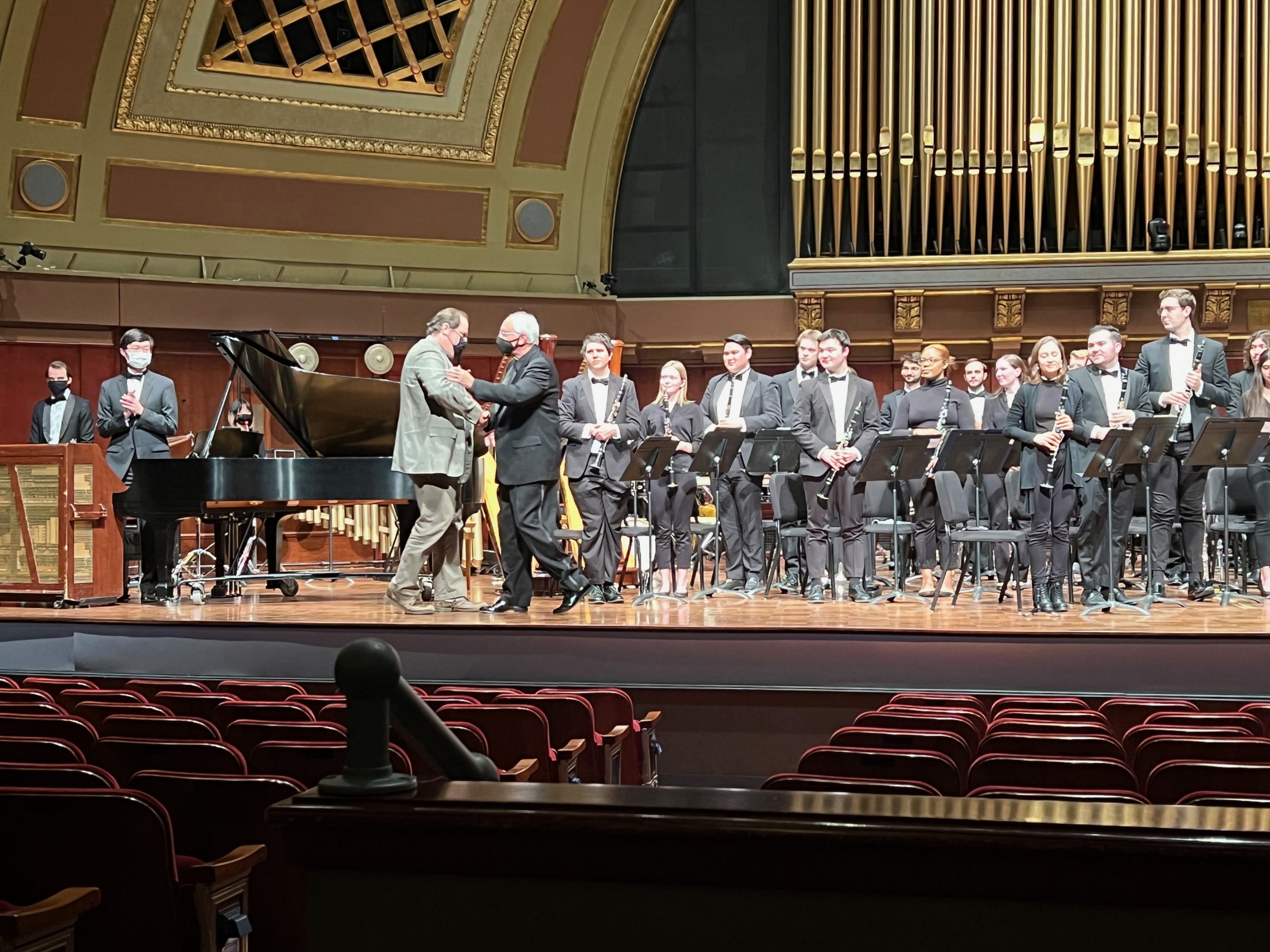 Evan Hause shakes hands with Michael Haithcock after the November 2021 performance by the Symphony Band of Branching, A Tree Symphony.

In conversations with Haithcock about this work and its premiere, Hause was struck by an incredible series of what he calls “intertwined connections” among his parents, his own education and career, his colleagues and professors, with U-M’s School of Music, Theatre & Dance at the center. He realized the branching metaphors he had explored in his symphony had additional layers of meaning, which he wrote about in the program notes, adapted below.

A composer with a rich body of work – including chamber music, large ensemble works, rock albums, serious and light operas, mini-operas, and orchestrations of electronic music – Hause is also a musician and conductor. His musical influences were strongly shaped by early performing experiences in rock bands, symphony orchestras, and avant-garde percussion and contemporary music ensembles. He also has worked in the theater and improvisational groups, and he has taught composition, theory, analysis, and percussion lessons to college students. He currently teaches electronic music at Drew University in New Jersey.

Program notes for Branching: A Tree Symphony by Evan Hause

Branching is subtitled A Tree Symphony. From Richard Powers’s 2018 Pulitzer Prize–winning novel The Overstory to the recent 50th anniversary of Earth Day in 2020 (that was unfortunately dampened by COVID-19) to my own experience as a product of Treetown, USA – Ann Arbor, Michigan – tree imagery has captivated me now as ever. I was coincidentally commissioned in 2019 by the Vocal Arts Ensemble of Ann Arbor for a work commemorating the Earth Day anniversary, premiere postponed, and for both that work and this one I was joyously under the influence of Tree.

The concept of “branching” is also metaphorical, considering the various branches of many intertwined connections with the University of Michigan School of Music, Theatre & Dance as taproot. My personal connection to the school, and its instrumental and composition programs, is vital and primal. I was a student from 1990 to 1996, receiving my master’s and doctoral degrees in composition, with a minor in percussion.

I later served as publications director for E. B. Marks in New York City, the publisher of my mentor, colleague, and friend, Professor Emeritus William Bolcom. In that role, my life intertwined with U-M’s new music activities in numerous different ways from afar. I edited countless new Bolcom works and a few William Albright works, and I managed a catalog that also includes Willis Patterson’s “bible,” Anthology of Art Songs by Black American Composers. Patterson was a classmate of my parents’ at U-M.

My parents were music teachers and were both Michigan graduates who met at U-M. My dad, Robert (Bob) Hause, a trombonist and aspiring conductor from Shelby, North Carolina, enrolled at U-M in 1954. He chose Michigan based on learning about the university and about William D. Revelli’s Symphony Band at a recruiting day held at Brevard Music Center, in North Carolina, when he was a camper. 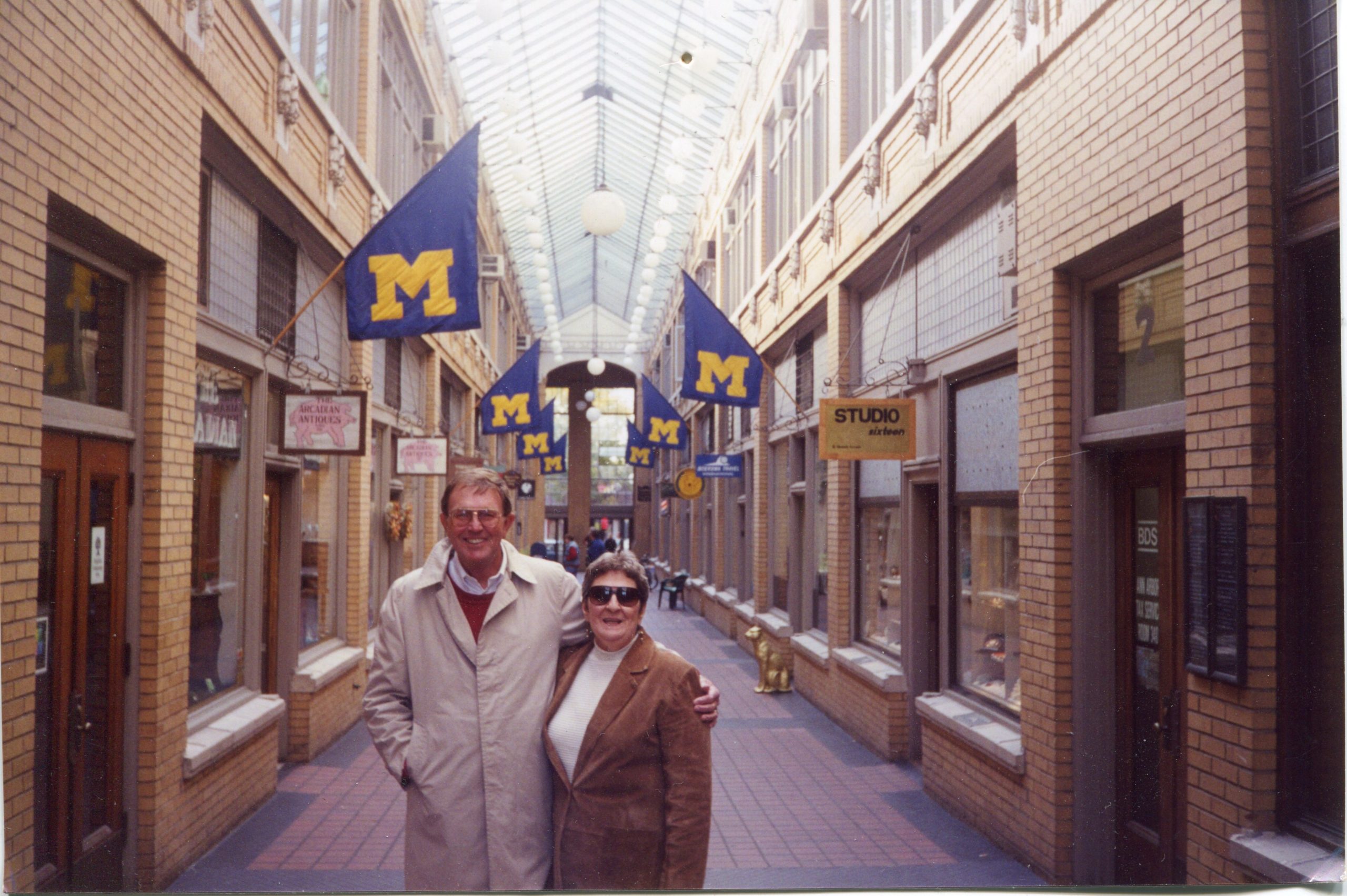 The composer’s parents, Robert and Karen Hause, on a visit to Ann Arbor in October 2000.

While at Michigan, one of my father’s bandmates was H. Robert Reynolds, who later conducted the Symphony Band, from 1975 to 2001. I played percussion in the Symphony Band under Reynolds, an experience that provided me with a powerful sense of the band’s compositional possibilities. My father studied with Leslie Bassett, with whom I would study composition in my first year (1990–91), just before he retired. While I am most often referenced as a student of Bolcom, it was only the Pulitzer Prize–winning Leslie Bassett of whom I had heard prior to moving to Ann Arbor.

In 1967, my father became the orchestra conductor at East Carolina University in Greenville, North Carolina, where I grew up. East Carolina was on the rise as the region’s best music school, in large part due to a strong contingent of Michigan alumni on the faculty, including Harold Jones (BM ’60, music ed), a percussionist in the 1961 Symphony Band that toured Russia, and Joanne (MM ’59, violin) and Charles Bath (BM ’51, DMA ’64, piano), influential proponents of the Suzuki method of music instruction.

Michigan’s musical branches and roots cover a vast swath of American music. What I thought was a special characteristic of my upbringing has morphed into a deep admiration for how important and powerful the polarity of U-M’s musical tree really is. It gives forth, and yet it also attracts. Lives don’t merely flow out of it, they also flow into it. 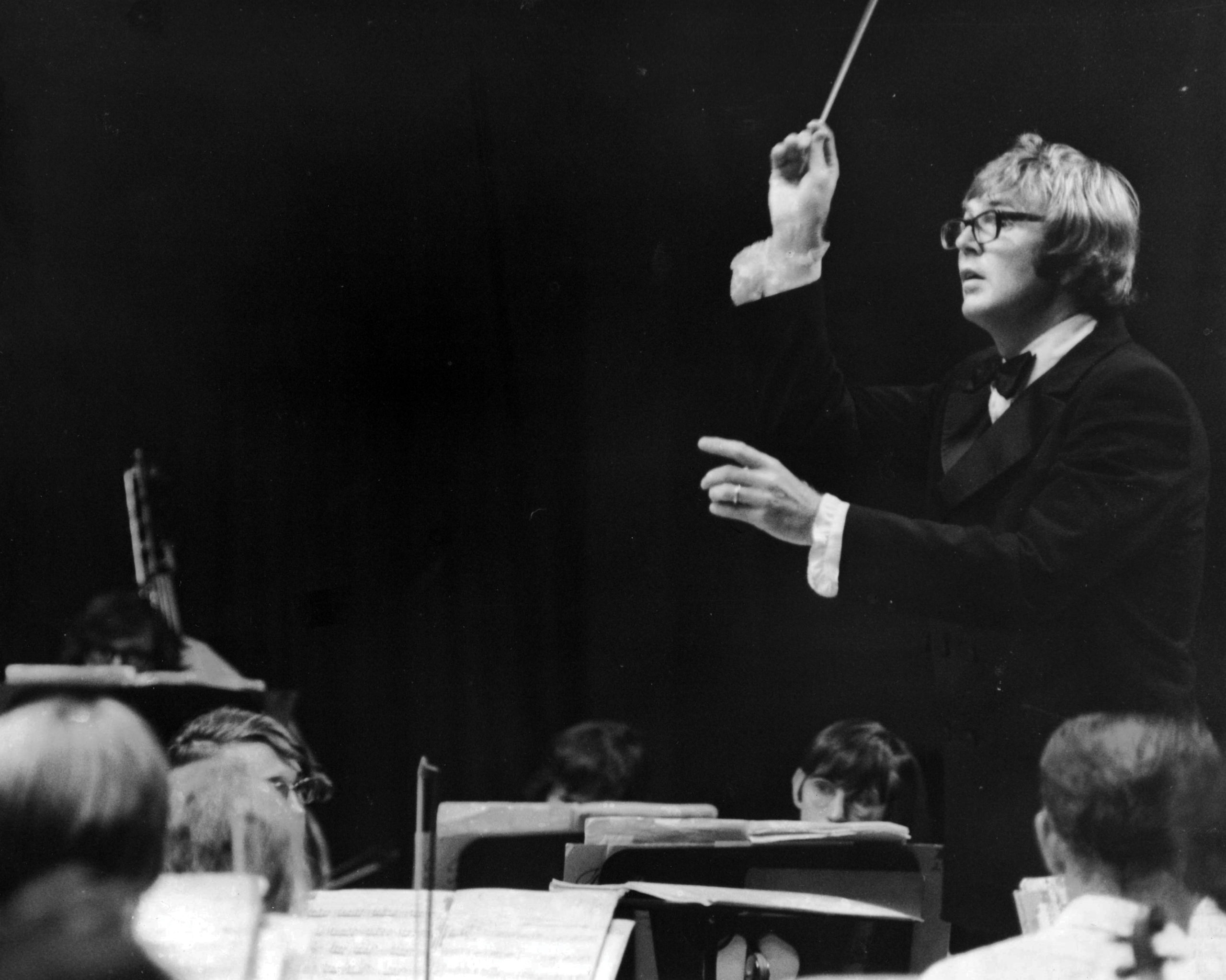 Robert Hause, the composer’s father, conducting at East Carolina University in the 1970s.

One of my father’s students during these prolific ECU years was Michael Haithcock, conductor of the Symphony Band since 2001, who commissioned Branching, A Tree Symphony. Haithcock studied theory and conducting with “Mr. Hause,” and through those studies, he learned the conducting pedagogy my father had absorbed through Professor Elizabeth Green in Ann Arbor. Not only has Haithcock carried on the legacy of Revelli and Reynolds with the Symphony Band, he has also modernized the influence of Green’s pedagogy through the recent publication of a conducting textbook. The roots of my father’s U-M education and his life’s work extend through Haithcock to Michigan students in a manner that made my father extremely proud and grateful prior to his passing in 2010. 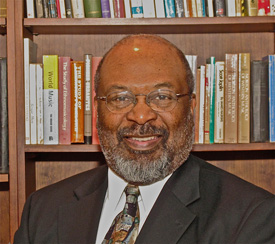 Branching, A Tree Symphony is dedicated to Professor Emeritus of Musicology Lester Monts, whose more than twenty years of service to U-M as senior vice provost for academic affairs and senior counselor to the president for the arts, diversity, and undergraduate affairs has “flowered” the environment at Michigan in multiple ways. His distinguished and visionary leadership has impacted the lives of many students across many fields of study, as well as deepening the university’s commitment to the arts. Monts’s support for the 2011 Symphony Band tour of China made the experience possible and forged a link between generations of students who participated in the ensemble’s historic tours of Russia in 1961 and Europe in 1983.

His thoughtful advocacy for diversity, equity, and inclusion in all aspects of campus life was a significant factor in the structure of the university’s ongoing efforts to reshape the campus community. From seed to flower, Lester Monts’s impact on the University of Michigan will be felt for generations to come.

← Performing <em>Hair</em> in the 21st Century: Honoring the Work and Acknowledging Change Jeremy Sortore will join the theatre & drama faculty in Fall 2022 →